Berlin-based, American artist Ashley Scott is set to debut her new series ‘The Rise of the Watermelon‘ at Positions Art Fair during Berlin Art Week. Represented by White Square Gallery, the artist’s new works consider the complex history of the watermelon as a symbol of racist oppression, as well as a sign of freedom and independence for many African American slaves. Dr. Juliette Brungs spoke to Scott about the concept behind her latest pieces, presented at Positions Art Fair from September 14-17. 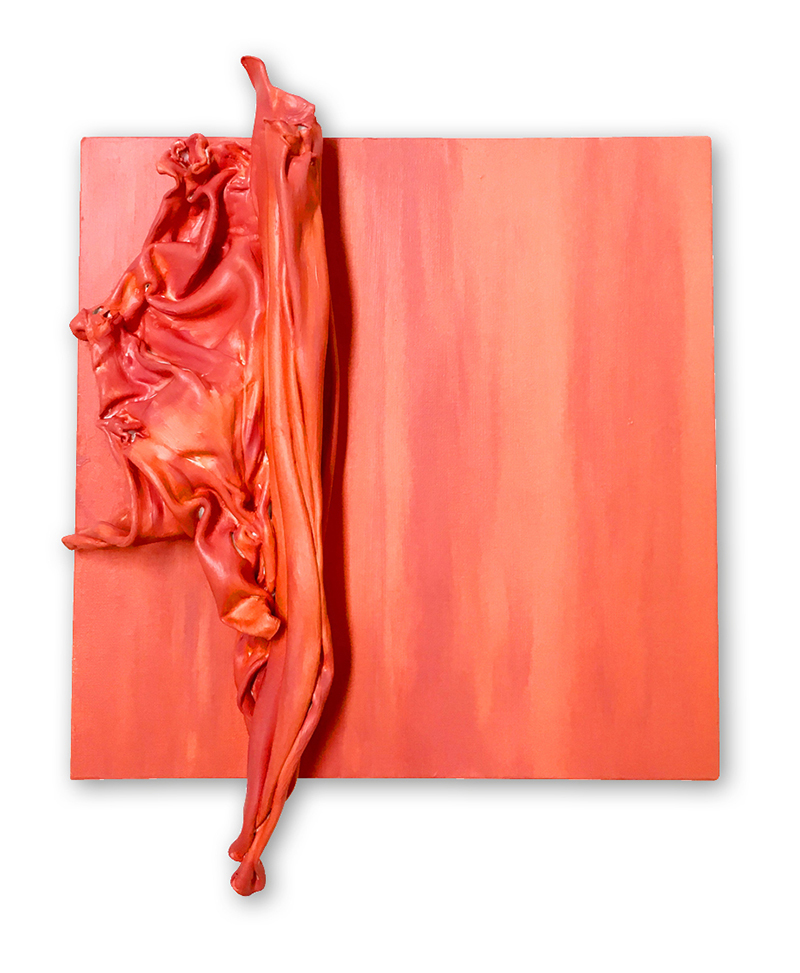 Dr. Juliette Brungs: How did you come across this particular topic?

Ashley Scott: I read an article about the meaning of the watermelon in the history of slavery in the U.S. When I dug deeper into the topic, I came across racist cartoons and the so-called picaninnies: someone gave me some memorabilia in the form of an ashtray. It bears the depiction of a picaninny-style, racially and physiognomically exaggerated black child. This led me to the next step, which was the webpage of the Jim-Crow-Museum at Ferris State University in Michigan. David Pilgrim founded this museum with his collections. For decades, he collected racist depictions of African Americans—former slaves, called derogatorily Jim Crow—in all sorts of different shapes and guises. Eventually, he donated his collection to the university, creating a unique, impressive but also very painful museum. I read his book, ‘Understanding Jim Crow’, and the very interesting foreword by Henry Louis Gates Jr., who is professor for African American Studies and director of the Hutchins Center for African and African American Research at Harvard University. It is obvious the topic has clearly reached academic scholarship, but still it seems the public lacks information on the complexity of the topic. And so I decided to dedicate my work to this topic.

JB: What about the title? Would you explain to us the relation of the watermelon to the history of slavery in the U.S.?

AS: In early modern European imagination the watermelon was considered food for the poor. Watermelons connoted a lack in productivity: they are an undemanding crop, they don’t need much attention, and presumably no hard work – that’s the train of thought of this imagination. That aside, preparing a watermelon can easily wreak havoc, they are hard to cut, and certainly most people who ever cut them know that the act might require a serious kitchen cleaning. This leads to watermelons having negative connotations: produce of the lazy, food for the poor, and a symbol of lacking hygiene. These negative ideas were depicted graphically in racist cartoons. For the slaves who had learned to grow watermelons for the owners of plantations, the opposite interpretation holds true: the watermelon stands as a symbol of freedom. Upon liberation from slavery, they farmed their own watermelons. And that is the central element to this work. The meaning of the watermelon for liberated slaves, symbolizing independence and a chance to feed their own families: I pit it against the cartoons and the picanninies. Both mirror the state of affairs past discourses of the uneducated, stupid, poor, physiognomically-racialized slaves as well as the liberated African Americans. For them, the watermelon had become a symbol of their freedom. 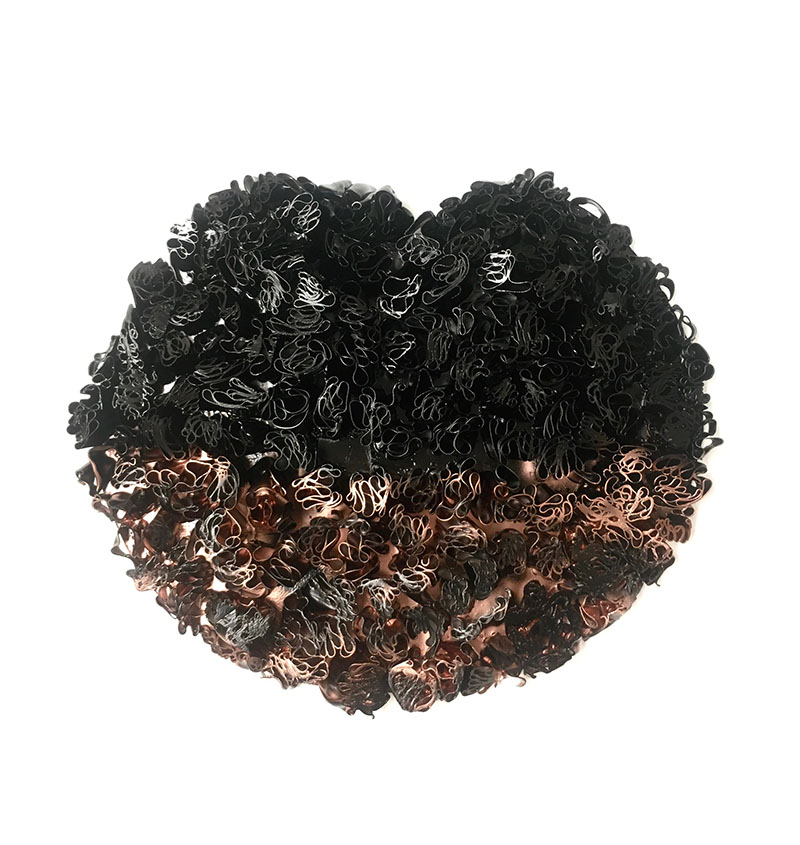 JB: What marks your art work in this area in particular?

AS: I began with 6+1 pieces but realised quickly that the topic is too complex and moved to 9+1, which I think is adequate. I don’t think that either this line of work, or the topic is done with for me. There is more to be said about it, it is a work in progress. Taken together, all the pieces comprise one installation that one can imagine like a jigsaw. Each single piece correlates with a specific picanniny and the tenth piece stands in for me as part of this (hi)story.

JB: The shapes and colours are attractive and friendly. How does that relate to the gruesome history of slavery?

AS: The colours represent the spirit of the people that was passed down through generations, despite hard fights. On the other hand, the colours are functional: they entice viewers to approach the topic, they raise interest and attention. The deep black square that represents me shows in this colourful context, it creates a deep blackness that is my core definition. Conflicts about colourisation are shining through, which are on-going issues within black communities. As opposed to the still existing idea that being of a lighter shade is better, more beautiful, and presumably represents more intelligence, I insist that as a deep black person, I command respect. 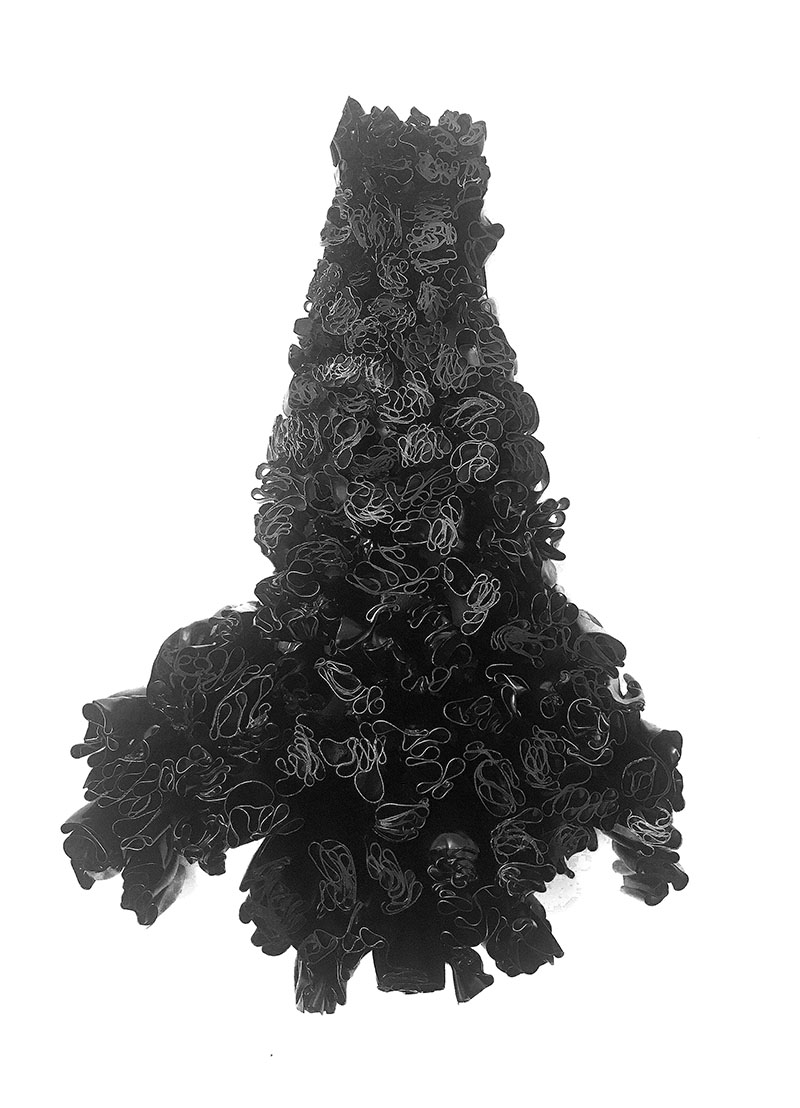 JB: Directly relating to this aspect: How do you see the perception of the non-white body by people in Europe and the U.S.?

AS: Dark skin makes for entertainment value, boundaries barely exist. Europeans often approach me and want to touch me, they want to touch my hair and they interpret me as sexually available. The sexualised view of our bodies remains a fact. In the U.S. we are being stereotyped and related to as having a ‘ghetto style.’ It is like this: all creativity and trends originate in the streets, and often times black women invent them. Be that as it may, as long as these women wear the styles themselves they are of little interest. But when these styles are imitated by others, and physical black features are being exaggerated by the mainly white fashion world, they become trendy and cool. These trends go so far that adventurous strange implants and injections for lips, hair styles, skin colour and even buttocks have become popular: one steals but refuses any political implication. That is why we feel robbed. That is why, in this project, I focus on the female black body. I take it out of context to deconstruct how it is being dealt with and how it is being perceived. The gaze that consumes the little, provocative girl who allegedly cannot help offering sexual favours. The little girl that drinks black ink. These are only two acts of superimposition and sexualisation, which at the same time go beyond the mere female body but relate to a net of general paternalisations of black people.

The picaninnies are but one example of how superimposition, racialisation and infantilisation amount to an objectification of humans and how they pave the way to general derogation. All of these fault lines do not only exist but they remain highly active. This is evidenced by recent events in the U.S. Dana Schultz, a white American painter, used the image of Emmett Till who was lynched in 1955 and drew massive attention at the Whitney Biennial in New York. But the murder of Till by two white men in Mississippi had once been a catalyst for the Civil Rights Movement. One can’t just appropriate this history: it is ours, and I understand my work as an answer and commentary to these events.