“I used to cry a lot at parties.” This revelation jumps out from the press release for the opening of Lisa Holzer’s first solo exhibition in Berlin, ‘I come in you – The Party Sequel (Berlin)’ at Gillmeier Rech. The text doubles up as an artist statement meets stream-of-consciousness prose, printed on a large page and tacked onto the wall. As if to drive the absurd melodrama of her text even further, you can just make out some tear-soaked mascara stains smeared on the page. Having attended the opening on the Saturday prior to my meeting with the Austrian artist, this phrase remained stuck in my head. The scenario seemed so contradictory in its nature, but was also a startlingly honest admittance of a relatable experience, an outburst of emotion that I realised I could easily sympathize with. Holzer’s whole exhibition seemed to simmer with an energy of intense emotional release, gradually eroding away its frontal façade of calm. There is both an aesthetic beauty in the colours and shapes of her photographs, but also something vulgar and abject in their manufacture. 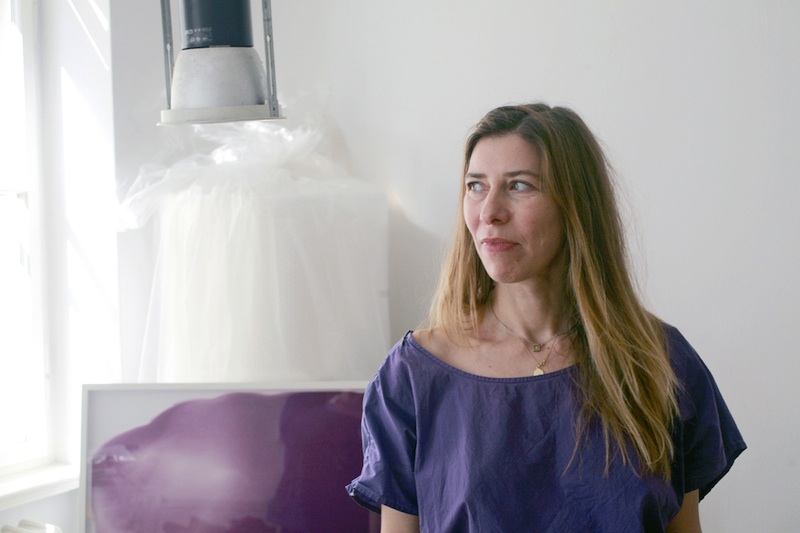 In contrast to the cathartic ejaculation happening within the exhibition, Holzer’s studio-flat in Schöneberg was imbued with a tranquil aura. Upon our arrival, she takes us through to her living-room, which is bathed in warm sunlight. Most of the available surfaces are occupied by her prints, half-clothed in bubble-wrap, stationed in the process of being shipped to Paris for Foire internationale d’art contemporain (FIAC), where she’ll be showing her work with Galerie Emanuel Layr. As we speak, we are surrounded by an array of different colours, thanks to the polychromatic bursts in her photographic representations of sugar icing spills alongside smeared and squashed vegetables. Having lived and worked in this space for the past six years, Holzer does not need much space for producing her work; her living-room provides enough room and light for taking her photographs. It is also an ideal setting for working on her computer afterwards, and boasts a close proximity to her kitchen now that much of her work involves food. 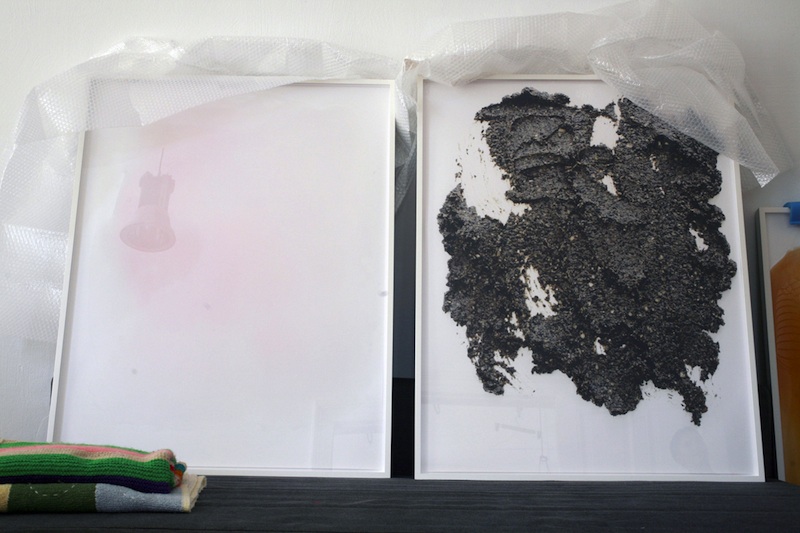 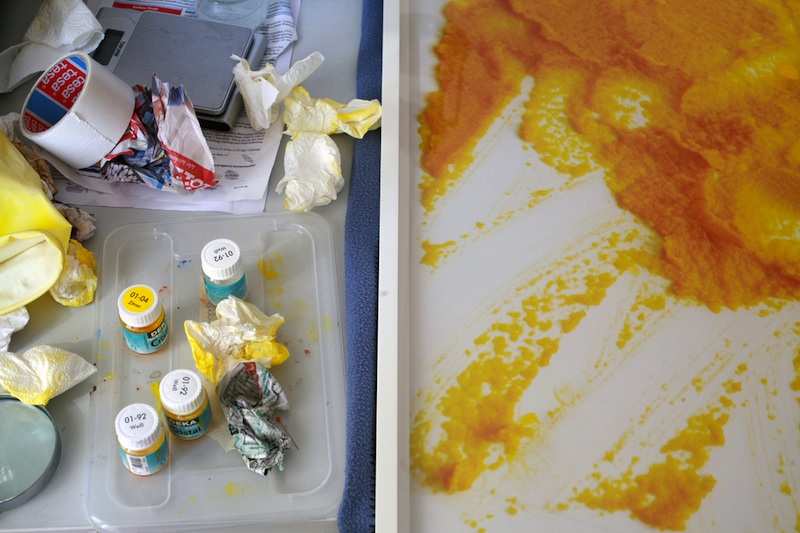 Holzer’s exhibition at Gillmeier Rech revolves around the act of purging, through both bodily processes and mental states, all hovering within a tense space between humour and seriousness. Playfulness underlies her process of creation, yet it also often springs from less carefree, hyper-emotive outbursts. “I guess I am also really angry,” she says, jokingly but it’s clear that this idea of quelling frenzy fascinates her. Each work in her studio is contained within a glass frame that has translucent drips stretching down them, a reference to our often unsuccessful efforts to suppress emotions beneath our outer bodily casing. As Holzer and I pass by the mashed carrot picture to look at one showing spilled pink icing sugar, she elaborates how she has come to realise the passive aggressiveness by using photography to capture her actions. “It makes me think of when you are angry, but don’t know how to mediate it.” By displaying these photographs within glass frames, the character of the food seems even more suppressed, their emotions overflowing in a form of controlled chaos. 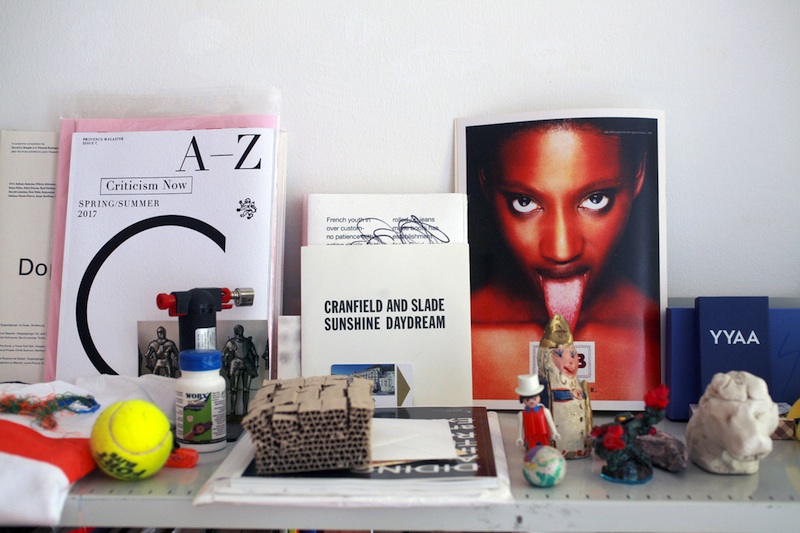 Holzer is interested in the parallel between food and our bodies, but her work also explores the link between extremities of our mental and physical states. “The idea for me was that the colour gets out of the picture, so they are crying or sweating or puking or spitting out colour,” she explains. Upon hearing this, my imagination instantly kicks in, and I now find it possible to see the works as small, clammy bodies. Holzer uses polyurethane to create the dripping effect: bottles of it are clustered next to various colourants on a table. Laid out next to them, one work-in-progress showing puréed carrot seems to sunbathe, its sweat drips still drying. Yet the human presence is not only apparent in their overall anthropomorphism, but in the signs of physical intervention within the form of food. In the smeared pea photographs, there is a clear sign of a performed action to destroy their form; I detect a dark yet almost slapstick humour in this act of violence upon a helpless plant. 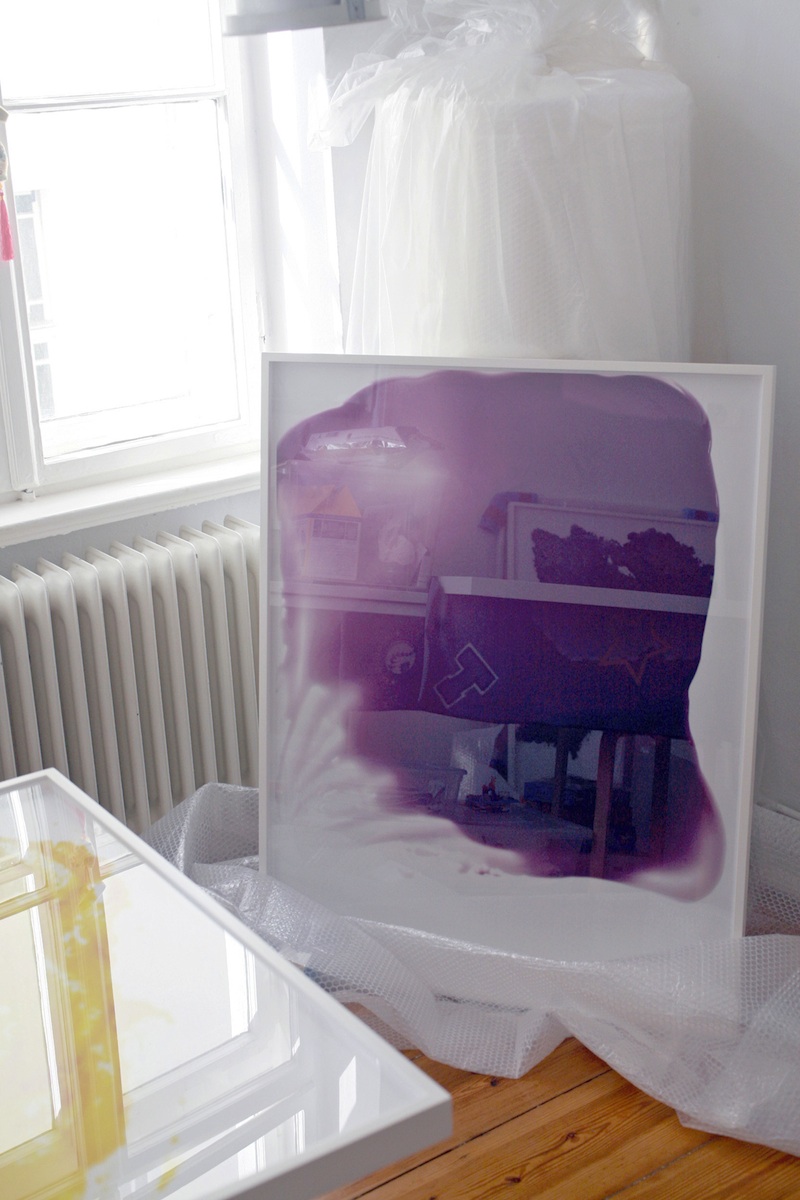 At one point, a childhood memory springs to mind, in which my parents told me not to play with my food during meals. I used to find this strange; it seemed related to a certain dinner table decorum, but also implied that I should hold my food with a divine respect. When I share this anecdote with her, Holzer responds that she regards each piece as a protagonist, revealing that this re-imagining of the status of food is important to her. She taps into a more childish side of her imagination to achieve this.

“I think that you cannot make art without making some fun of what you are doing.” Holzer’s work often returns to this tongue-in-cheek self-reflection. She laughs frequently while we are talking, which reveals to me her ability to detach herself from the gravity of subject-matter underlying her work; she can perceive it with the same humour she hopes that her viewers will experience. At the same time, Holzer demonstrates a boldness in approaching an array of taboo issues—food, emotion, bodies and their processes—that our society repeatedly forces us to keep separate from each other.