The new face of Berlin’s premier art fair opened yesterday afternoon on day two of Berlin Art Week, assembling Berlin’s leading galleries, celebrated artists, art world movers and shakers, and the art-loving public under the huge roof of Station-Berlin. The newly founded Art Berlin partners abc art berlin contemporary together with the seminal and long-standing Art Cologne, chaperoning Berlin’s leading art fair into a new chapter. Around 110 galleries exhibit artists from 16 countries, packing the halls of the historic train station with established and emerging artists for a four day showcase that balances new positions in local and international contemporary art and the commercial reality of the art market. 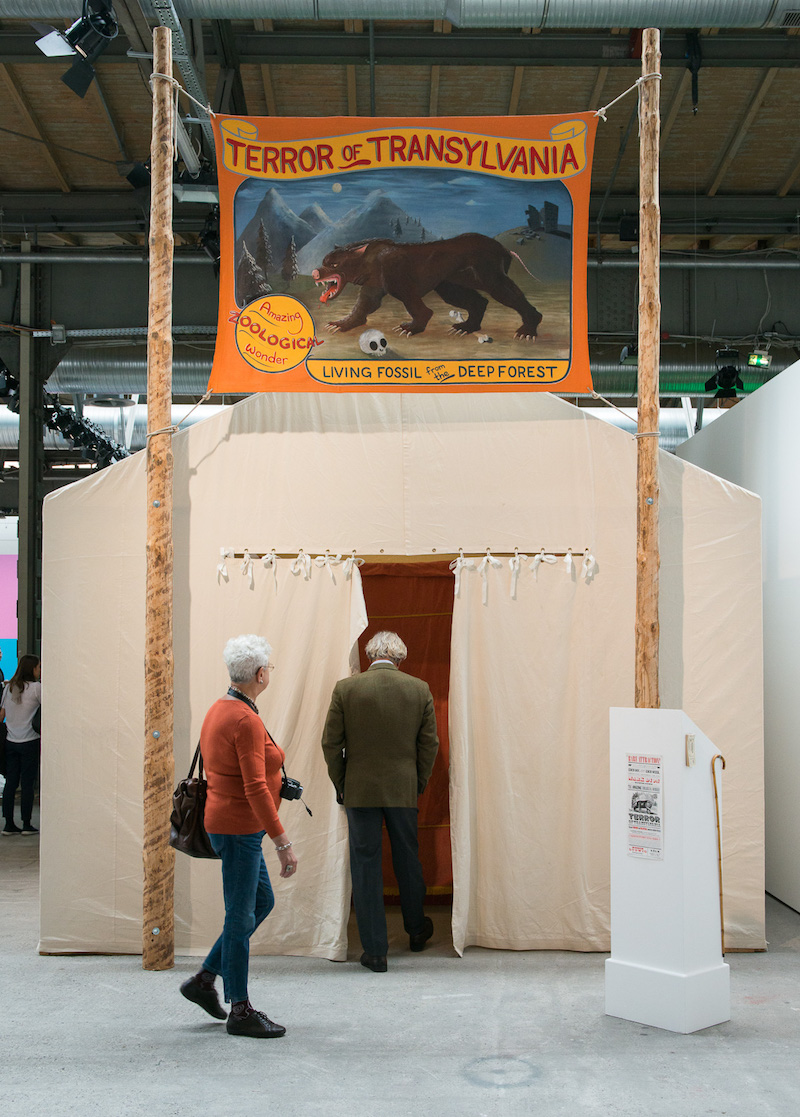 The collaboration with Art Cologne introduces a slight air of stiff art world status to the former abc art fair, which evolved over its nine years toward more conceptual practices and experimental floorplans. Gone are the less conventional features of previous years –guests architects, a curated exhibition, live broadcasts from Berlin Community Radio– in favour of the unmistakable art fair three-walled booth format, with a few exceptions of course. As an average member of the art-loving public, it’s hard to feel like you are not the target audience, especially surrounded by the sharp-suited ‘other half’. This year’s opening day ticket price shooting up to 35€ confirms this suspicion. However, the strength of the some of the works and presentations is in their ability to entice and engage viewers within the designated walls and despite the humming crowds and hustle going on around you. 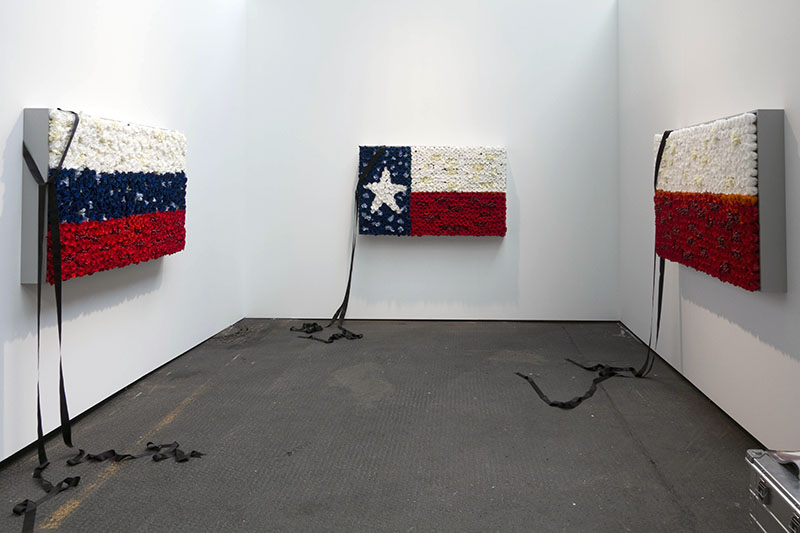 With the commercial tinge that defines an art fair, works that defy their own commodification really stand out. Bunny Rogers does exactly that with her three red, blue and white flags, from Texas, Poland and Russia, that hang facing each other in the close quarters of the Société stall. The flags are made from real roses, vivid in colour and velvety in texture. The roses are freeze dried, prolonging their life for 2-3 years, but decay is inevitable. Each draped with a ribbon, the flags resemble the over-the-top flower arrangements adorning public ceremonies, both celebratory and mournful. Rogers works with sculpture, video and installation creating works that access and contemplate personal and communal experiences of loss, alienation, and belonging. Her recent video installation at KW, ‘Columbine Cafeteria’, 2016, provokes the public mourning that surrounds tragedy. Like acts of public mourning, these flags make public aspects of Roger’s personal life; her home state, her ex-boyfriend, her obsession with Russia. The flower flags channel the gaudy funeral wreaths that become a symbol of personal trauma turned public spectacle. 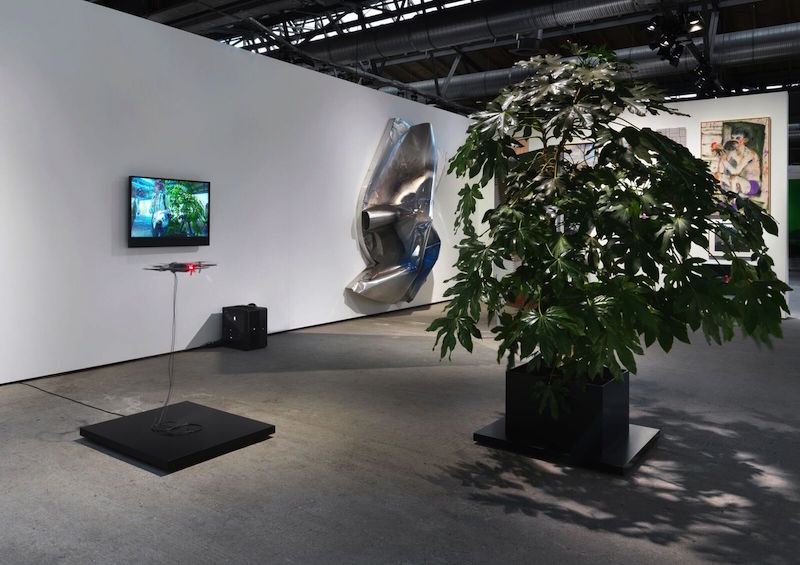 Some galleries succeeded in presenting a cohesive set of works that interacted like a mini group exhibition. Dittirch & Schlechtriem showed works by Andreas Greiner, Julian Charriére, and Dorian Gaudin with elements of the natural world and organic forms meeting various image processing technologies and industrial sculptural materials. At Galerie Tanja Wagner, American artist Laurel Nakadate’s photo series, ‘Lucky Tiger’, 2009, challenges notions of self-empowerment through sexuality and self-representation, depicting self-portraits with a distinct homemade soft-porn aesthetic. The photos are smudged with obvious black inky fingerprints, marks left by middle-aged men Nakadate enlisted from Craigslist. The neighbouring photo series, ‘Šejla-San’, 2005, by Šejla Kamerić addresses the complexities of gender and cultural identity, and self-representation in five self portraits where Kamerić is dressed and posing as a Geisha. In each photo she holds objects from previous works, including her most famous work, ‘Bosnian Girl’, 2003, in which the text “No teeth…? A mustache…? Smell like shit…? Bosnian Girl!” is written across her own image. Along with works by Turkish artist Nilbar Güreş that communicate the struggle of being a gay woman living in Turkey, the three women artists explore of the entanglements of gender, sexuality and cultural identities. 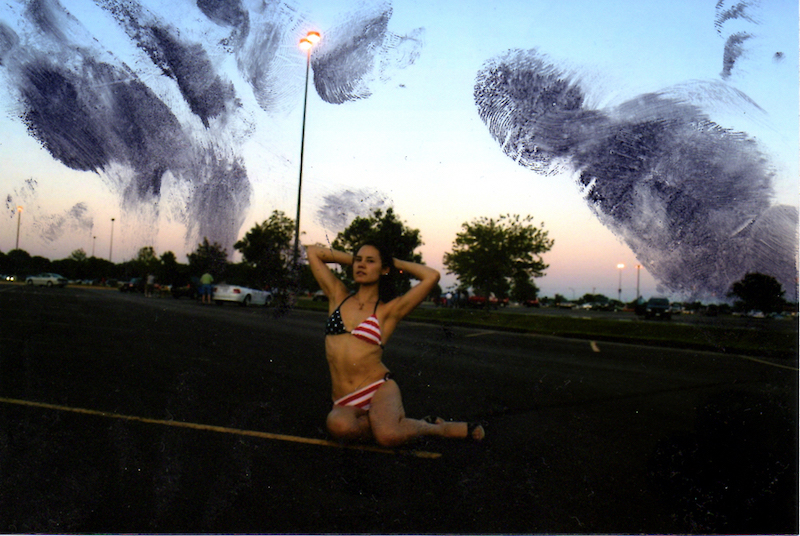 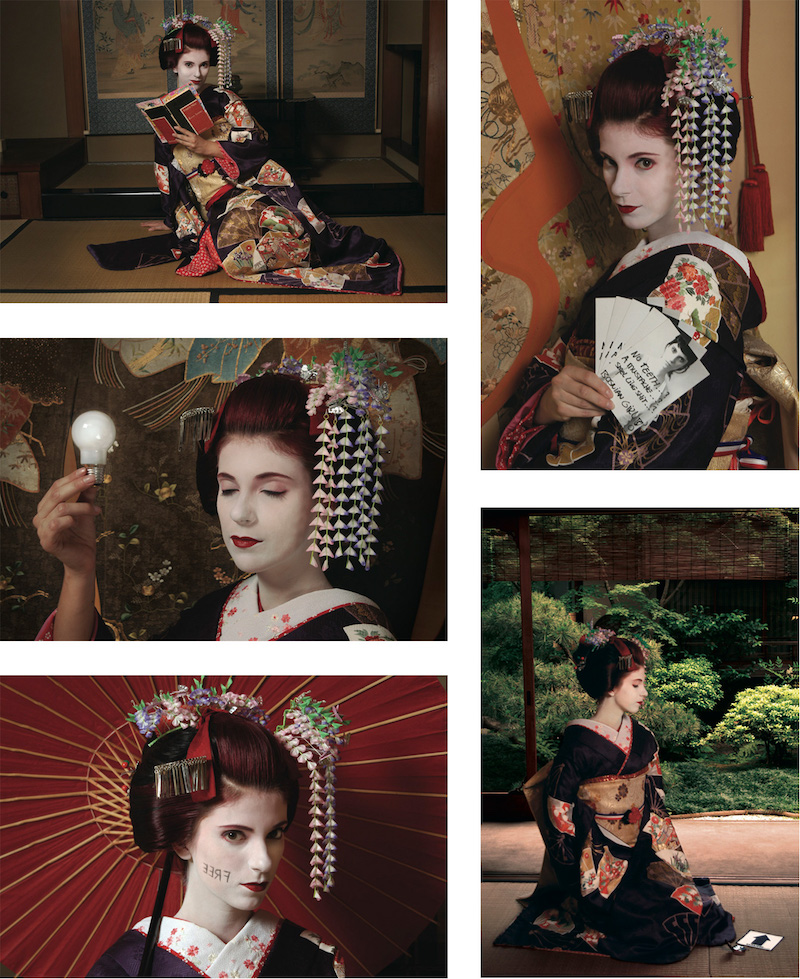 In a somewhat segregated and almost completely dark side room between the two main halls, a spotlight shines down on a small sculpture on the floor. The striking display seems mysterious and somber after having just surveyed over 60 busy stalls. PSM Gallery presents British artists Awst & Walther’s new work ‘CULT’, 2017, a 3D resin-printed single shoot of a roadside weed. The weed, commonly known as thale cress, is often used in genetic engineering due to its small genome. The little manmade weed could be a cheeky symbol of the Anthropocene—the age of human impact on the planet and its ecosystems. As 3D printing becomes a standard of art making, it is no longer a statement about the future, but about how deeply inseparable these news technologies and nature are.

Sprüth Magers was perhaps the only gallery that rejected the walls of the art fair booth entirely. The large and intricate installation by John Bock revises his 2016 installation ‘Labskaus’ at Wolfsburg Unlimited, for the Art Berlin space. Objects, furniture, and building materials are compiled, manipulated, stuck together and ripped apart in a labyrinth separated by bright green fabric walls. The installation tells the story of Hans Scharoun, the visionary architect of the Berlin Philharmonie. Scattered throughout the overwhelming installation are materials and forms that resemble organic matter, from hay, hair and eggs shells to bulging and oozing spray foam, both contrasting and meshing with found objects, drawings, photographs, and sculpture. The installation is tense and dramatic. It feels like being inside the tormented mind of an artistic genius, which was perhaps the reality for Sharoun whose architectural vision referencing organic forms was too radical for its time. 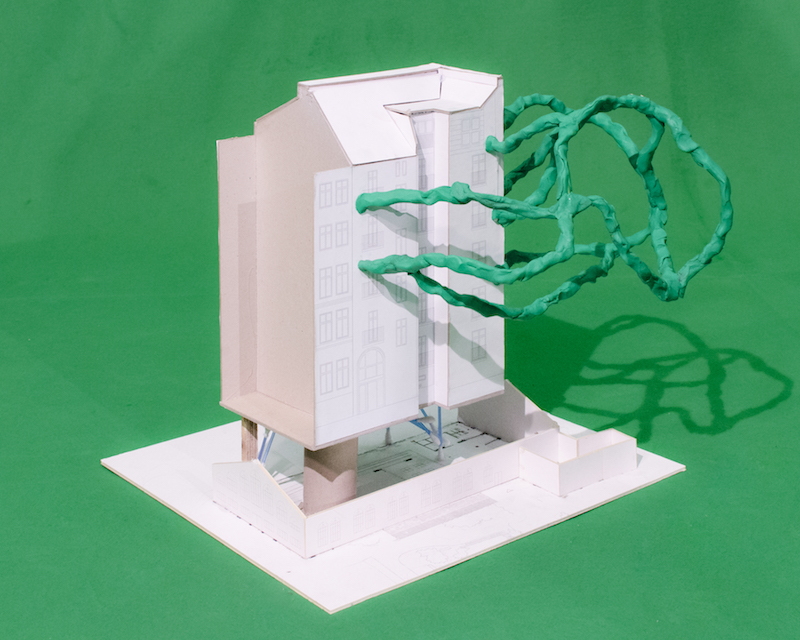 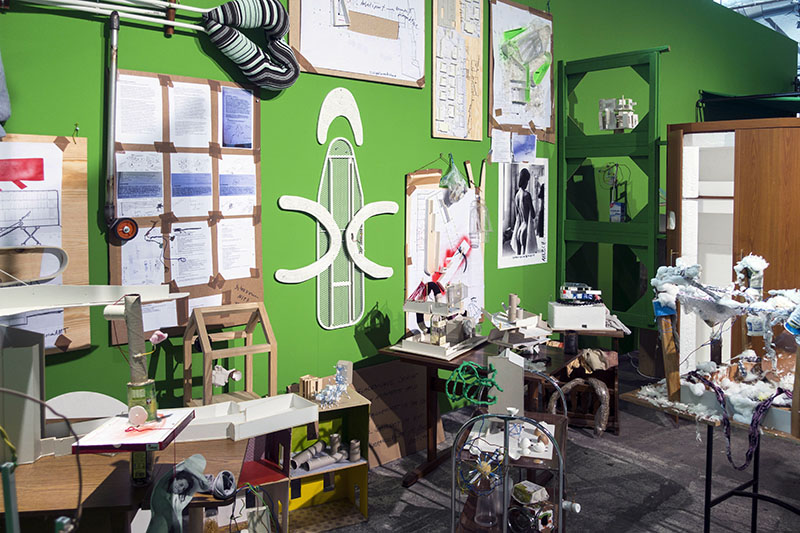 It’s easy to spend hours traipsing the aisles of Art Berlin, with a mixture of works ranging from intimate to show stopping. Though with little information about the works laid out for visitors, it pays to chat one of many gallerists who are ready to inform you. Stripped back to the bones of the art fair model, Art Berlin serves as comprehensive survey of an international art market centered in Berlin. The result is a relentless array of mostly wall-based works in densely packed booths, yet the quality of the individual works remains just as high as, if not surpassing, the years before.