Returning to its home at Arena Berlin, this year’s POSTIONS art fair presents a huge array of contemporary artworks delivering a taste of the Berlin and international art market. Taking place between 14-17 September, the range of artistic approaches and combination of rising artists placed alongside the more established names makes for an eclectic viewing experience. Wandering through the 83 exhibitors, some of the works that stood out seem to pivot between mediums, treading between painting and sculpture, performance and photography. This fluidity and the manufacturing of an evolving viewing experience underpin my highlights of POSITIONS, observing as you weave your way through the booths the common threads linking works in unexpected ways. 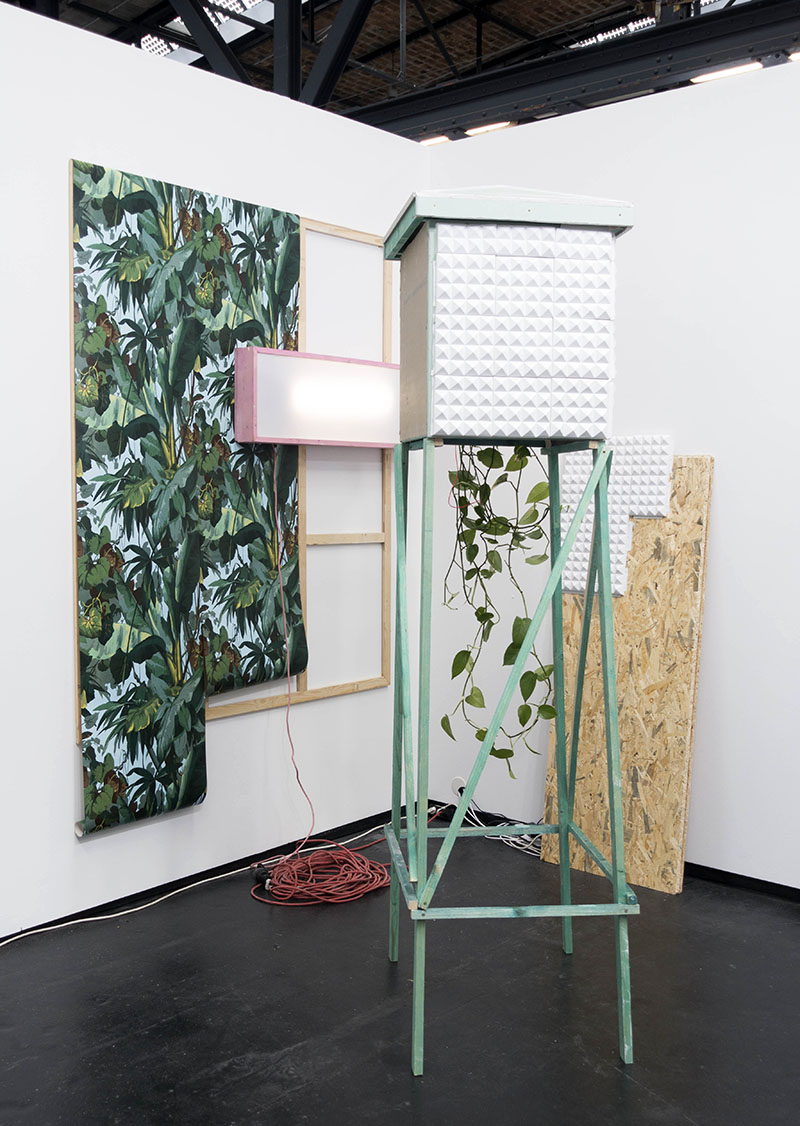 Soon after entering Arena, I encounter Margaret Eicher’s black-and-white tapestry ‘City of Women.’ Represented by Galerie Horst Dietrich, Eicher’s piece holds a monumental stance, realised in a format which would not look out of place within a stately home. The work’s force resides in the fusion of a historic medium with popular culture; showing twelve women –icons of fantasy and cult classics– lounging and staring confrontationally at the viewer, ‘City of Women’ proudly flaunts its kitsch eccentricity, and in its title references the Fellini’s infamous fantasy film. Experiencing this work feels like having witnessed a harangued reclaiming of a stolen sexuality, a motif which is accelerated again even further by Galerie aKonzept. This gallery presents a selection of works that demonstrate a queering of normative behaviour. Showing works such as Sadie Lee’s painting of Holly Woodlawn, there is a similar emphasis on the direct stare as an expression of autonomy.

On the whole, Positions shows substantial quality in the manufacture of artworks, yet this does not mean that the works feel stale in repeating time-old artistic habits. Galerie Robert Drees also showed how artists can adopt more traditional forms of craft in humourous ways, whilst still retaining a subtlety in its delivery. The work of Venske and Spânle seems to interact with the booth itself, dripping and sliding like bulbous growths on the surface of the walls. Their appearance seems almost cartoonish, yet the sculptural forms exhibit an excellence in execution, as their smoothness is immensely satisfying to look at. Yet loitering in this booth does not allow much time for quiet reflection. Almost immediately after, I am stolen away from the skeek white marble sculptures by the commotion of Paul Schwer’s series of curvy polychromatic sculptures. These works emit a peculiar tension, where the elegance of the glassy material gripping steel in a tight embrace seem like miniature collisions of curvaceous natural forms with industrial materials. 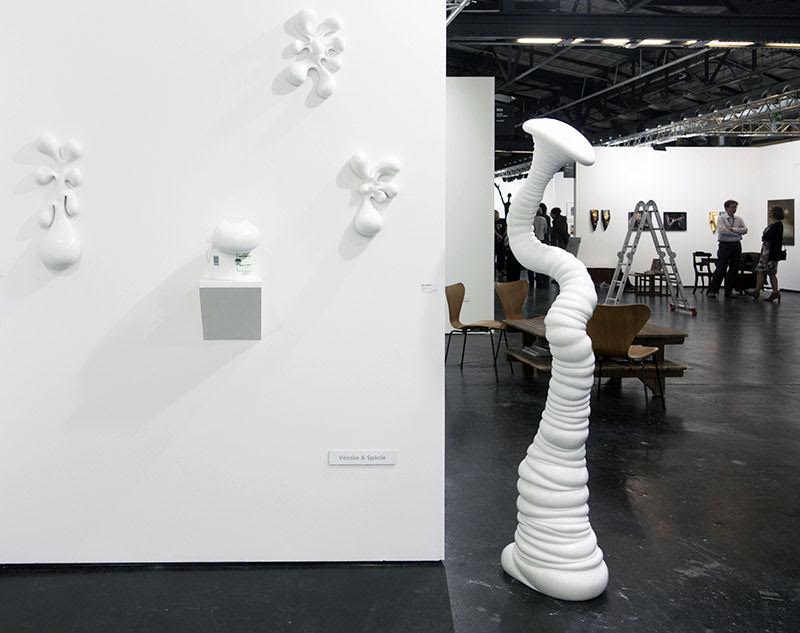 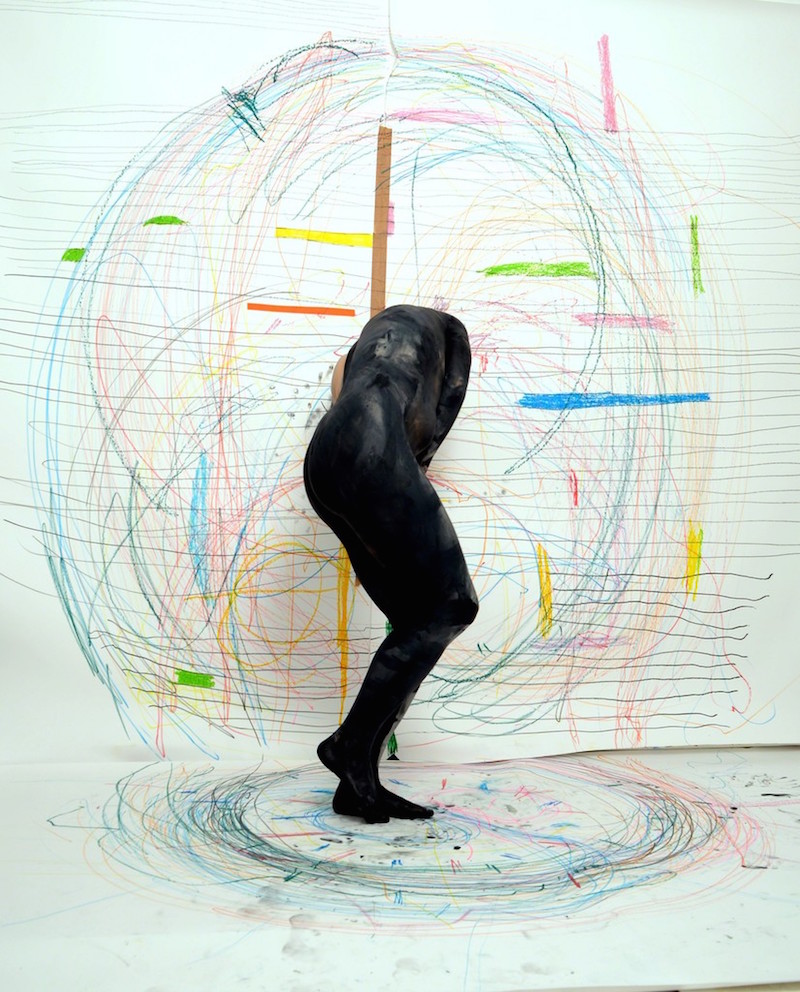 Despite the difficulty in including performance within an art fair, Galerie Bart rises to this challenge through representing German artist Isabelle Wenzel. Depicting transitional moments within a prolonged action, Wenzel’s photographed poses manage to sustain the viewer in a zone between being humourous and more sympathy-inducing. In ‘Drawing 4.2,’ a contorted body painted black stands within an enclosure constructed from a scruffy mural of pencilled marks. Absorbed in the turmoil of its own creation, one is struck by the figure’s solitude. The fact that Wenzel’s images are ostensibly staged contributes to this sense of desolation, as the figures appear almost robotic, an artificial simulation of reality. This idea of replication is also present in the booth of Marke.6, in which Christian Claus’s multi-part installation ‘Playground’ integrates a minimalist, pastel-filled, readymade aesthetic with conceptual sculpture. The installation seems to be imagined on the front porch of a self-employed entrepreneur, yet it is knowingly fashioned as a pastiche; viewers will find themselves lured in by this reference, but feel the intangible boundaries that prevent us to fully relate or engage.