Throughout all the varying theories of play in the last 150-odd years, regardless of discourse or discipline, it is often described as a kind of median, an interface by which the mind dialogs with the external world. Play is instrumentalized, what differs in each theory is the purpose of this tool: Friedrich Schiller’s writings in 1873 describe it as a natural and spontaneous expression of excess energy; in Jean Piaget’s cognitive theories of the 1950s, play accommodates and assimilates new experiences. Sitting in a row of color-coded primary school chairs this past week, and watching, reading, listening to Andrea Crespo’s video ‘[intensifies]’, the flaw in these theories seemed to hinge on what kind of instrument, timbres and tones, we expect from the playing subject, their psyche in friction with the world like a cricket’s two legs rubbing. We accept certain forms into the mainstream and reject others; we’re conditioned with the 12-tone scale. 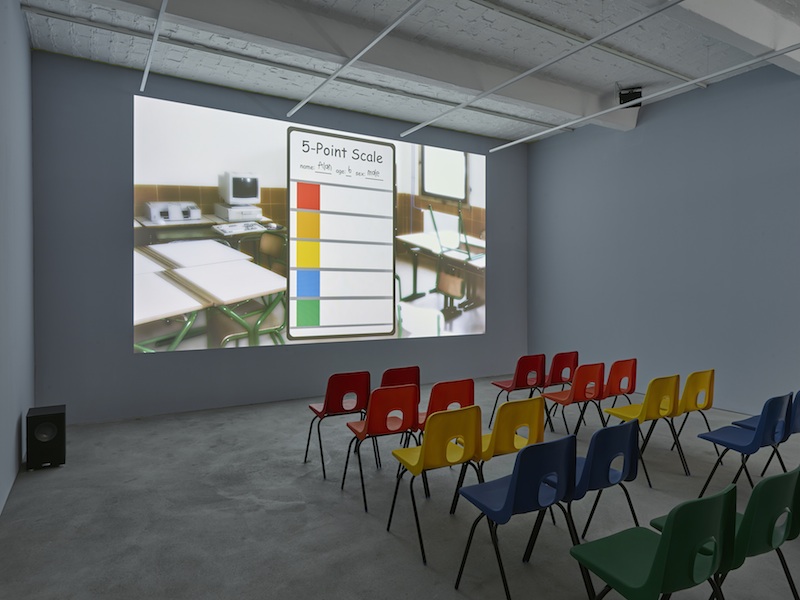 Andrea Crespo: ​Exhibition view from ‘[intensifies]’ // Courtesy of the artist and Kraupa-Tuskany Zeidler

Alan, the video’s protagonist through whose eyes and mind we process the world, thinks study hall is “fucking retarded,” something we glean from the dialogue (often internal) that appears as subtitles throughout the video. He doesn’t like the top-40 “neurotypical music” the other students play, with its focus on vocal hooks (if not complex lyricism), as he’s hyperlexic and nonverbal. But Alan is also simply alienated by the popular culture of alphas, “NTs” (neurotypicals), “brobots” as he calls them. Throughout ‘[intensifies]’, Crespo orchestrates a friction: to dispel the othering of people like Alan—those with Asperger’s syndrome, or more generally on the autism spectrum or neurodivergent—and at the same time being prompted to recognize a difference in the way he experiences the world. This disjunct plays out through Alan’s dual dis-identification with and recognition of himself in popular, often demeaning, representations of autism. The exhibition title itself refers to the ‘[autism intensifies]’ meme; and perhaps Alan would find it both amusing and alienating, at one point thinking, “I’m a stereotype…How can I expect others to take me seriously if I find autism jokes funny?”

The friction is dual, hyper visible and invisible. Crespo, however, so ably represents this ambivalence with the sophisticated construction of their video. With tact and play, they simulate Alan’s mental condition, its mechanisms and reactions against the misted, static backgrounds providing the mise en scène of Alan’s life: the university classroom, the counsellor’s office, the back window of a car on the way to the clinic. Alan’s perceptual and cognitive display appears in the foreground; as he ages, we see 5-Point anxiety scales change to graph readouts of a brain scan, the abstract of a peer-reviewed article on autism he recently read, a meme saved to his hard drive (a play on the Gran Turismo racing games, it’s the front cover of a PS420 game called ‘Gran Autismo 6’. It in turn samples a meme of a stocky fan-art Sonic the Hedgehog, known online as “Sanic,” which is featured on the cover). We get to know this character as a media interface, which is often the way he seems to view the world: as a series of mechanisms, social codes, and biological reactions he could learn to hack. 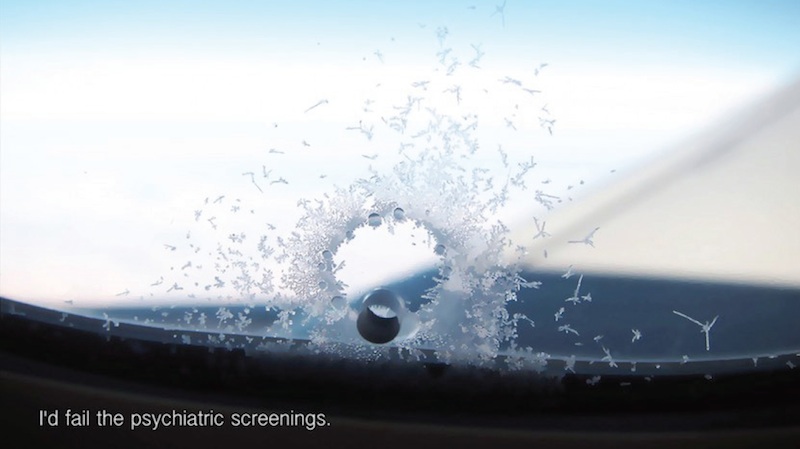 Perhaps Crespo’s video simulation is particularly effective for representing Alan’s psyche, given his aptitude in nonverbal linguistic operations and sensitivity for illustration and image—the latter is given further dimension in the series of pencil drawings accompanying the video, and which Crespo “created by embodying Alan’s experiences and fantasies”, as the exhibition text states. As the screen fades to white, we experience Alan’s blackout triggered by a building fire alarm, vulnerable as he is to loud noises; or we hear the crisp sound of a pen making checks on a test with heightened volume and clarity. What we don’t see is Alan’s body. We don’t hear his voice; nor are we given a signal of his stimming in a stressful situation. In a school lockdown procedure, we read across the bottom of the screen “Is he rocking again?” and later “If it’s a shooter it’s probably some outcast beta like Alan!” Much of the artist’s work has dealt with the embodiment of neurological makeup; here, they seem to outline alternative forms of embodiment or representations of the psyche—in networks, machines, the jet engines Alan adores. 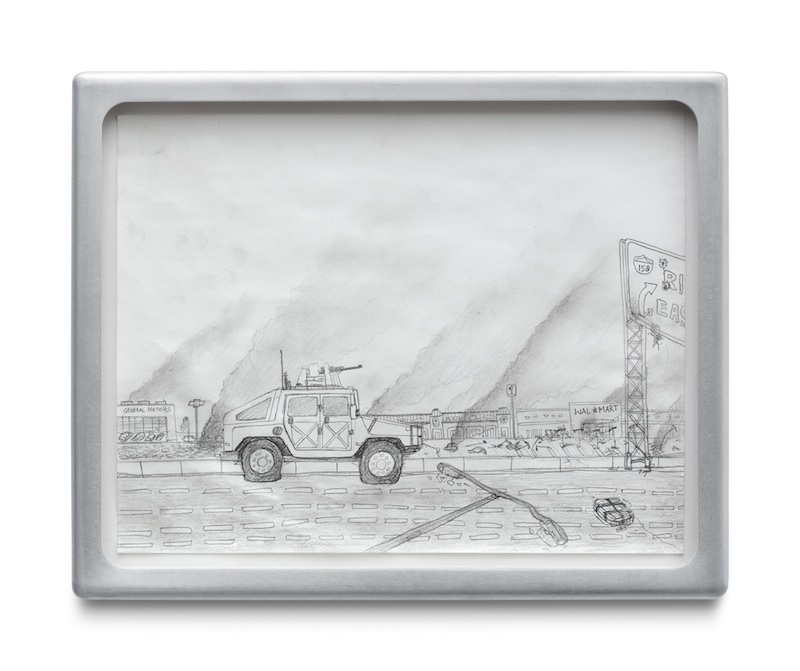 “Mental condition” is more than “mental illness”. I refer more widely to a human internal condition. Through first-person POV, we learn of Alan’s passion for evolutionary biology, cryptology, and engineering. Effusive for WWII studies, black and white footage of bombers and a crackly 1940s anthem overlay the blackboard readout for a history class. He admires Alan Turing, the British codebreaker of Nazi radio signals, who was eventually sentenced for his homosexuality, forcefully given a treatment of synthetic estrogen, and committed suicide. “The Nazis were so ingenious,” Alan thinks at one point: he’s considering both their prowess in aerospace engineering and the eugenicist mission. Again, this friction: Alan recognizes he would be condemned to death, recognized as lebensunwertes Leben or “life unworthy of life”, by the fascist regime. On the other hand, he respects their essentialism. I assume it’s because he operates within a world so essentially detuned to his experience of it; like Turing, he is an enigma. And naturally, as a means of survival, there’s a certain pride in existing at the margins, being the “outcast beta”: “Creatures like us shouldn’t exist, we’re superior.”

Crespo is willing to show the whole spectrum of emotions and processes of someone on the spectrum, even those that might contribute to the misguided correlation of autism with school shooters and a flattened, mechanized mode of thinking. We’re given a one-way mirror into the feedback loop of Alan’s self-representation and how culture at-large represents “people like him.” He has violent fantasies, but so do NTs. We also see his points of entry into this loop, his participation in rendering himself. A number of vehicles in Alan’s/Crespo’s pencil drawings of airplanes, humvees and army tanks bear Alan’s name. He’s also part of online communities, meme markets, neurodivergent forums, chats with a user called “xenokin” (his username is “sonicflame1515”) who asks about his drawings and is recently “out of captivity”: here, I assume, inpatient treatment. He may be uncomfortable with verbal communication—he turns off his headset microphone when he plays Counter Strike—but he is surely in dialogue with the world, IRL/URL. 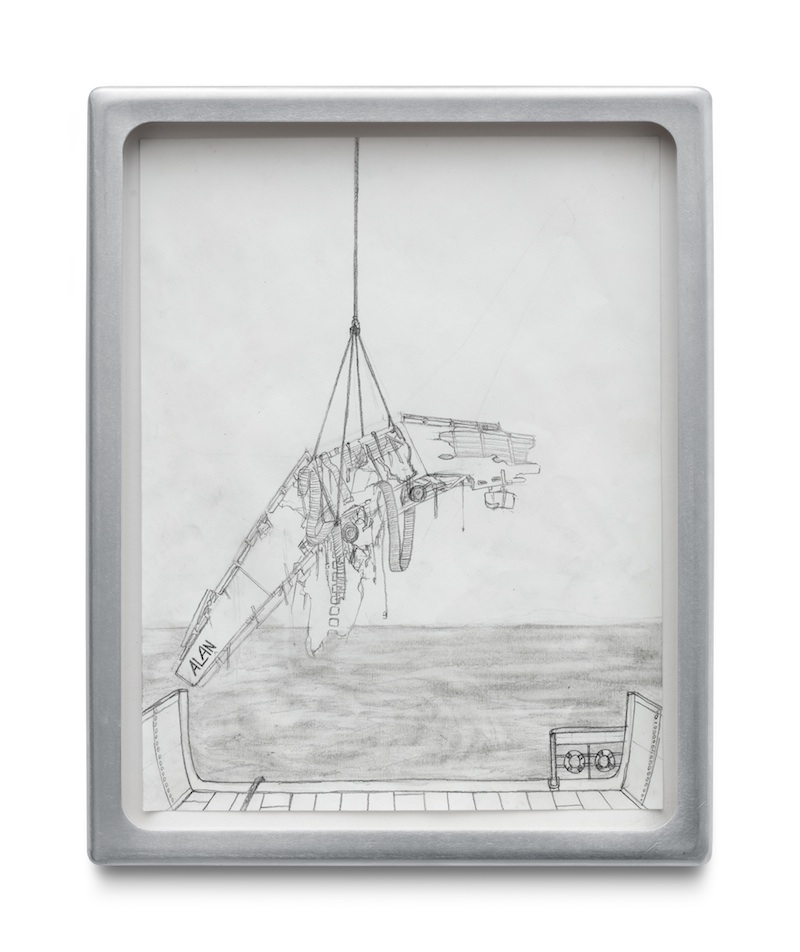 As Jack Khan has written in a DIS Magazine posting of Crespo’s video ‘sis: parabiosis’, access to these networks “allows minoritized psychic or neurological embodiment to…produce a cultural language that intervenes and elaborates upon the medical discourses hegemonic within discussions of mental illness and cognitive disability.” Alan’s ability to exist within the system is in fact a form of resistance: he plays Sanic against Sonic. On another level, we can view ‘[intensifies]’ as enacting a similar dissidence within the art world; Crespo’s self-identification in regards to their gender, mental subjecthood, and neurological embodiment would be considered “divergent” to the mainstream. In this way, Alan acts as a kind of avatar for Crespo, Crespo an avatar for Alan, Alan for Sonic and vice-versa. Similar links can be drawn between the artist and Cynthia and Celinde, the conjoined twins Crespo has created in a number of past exhibitions, or, for that matter, Alan Turing. Although they have stated that parts of Alan’s life are sampled from their own, Crespo still cautions us against seeing ‘[intensifies]’ as self-portraiture. What seems more pertinent are their interventions and elaborations upon today’s networks of meaning, embodiment of gender or mental condition, and their opening up of divergent paths, perhaps leading the way to harmonies unheard of.