With the launch of its bi-monthly performance series Montag Modus, the Collegium Hungaricum Berlin has quickly become one of Berlin’s most exciting venues for performance art. Hosting an array of primarily Hungarian and Berlin-based artists, the cavernous studios of the CHB offer a unique space for visual, sonic and performative experimentation. Last Monday, ‘Animalinside’, curated by Léna Szirmay-Kalos, featured four distinct pieces which played with site-specific immersion and installation, multi-media storytelling and original performance formats. 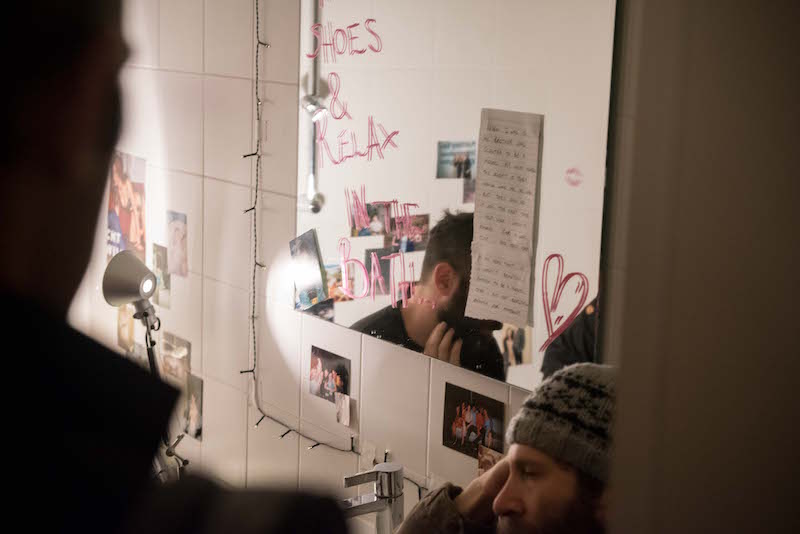 With magazine cut-outs of immaculate models glued to the walls, the audience was immediately confronted with the images of female perfection that occupied the performers of ‘War Paint’. As they painted their toenails, applied make-up and relaxed in the bath with a book in hand, stories of their first encounters with their sexuality and with their bodies rang out from the speakers. The apartments of the CHB’s 5th floor were transformed into a teenage-style emporium where the typically private beauty rituals of women became public. With the confinement to small spaces, Mummy’s Sloppy Honey offered an intimate insight into the female ideal and could, upon further development, address its complexity in more depth. 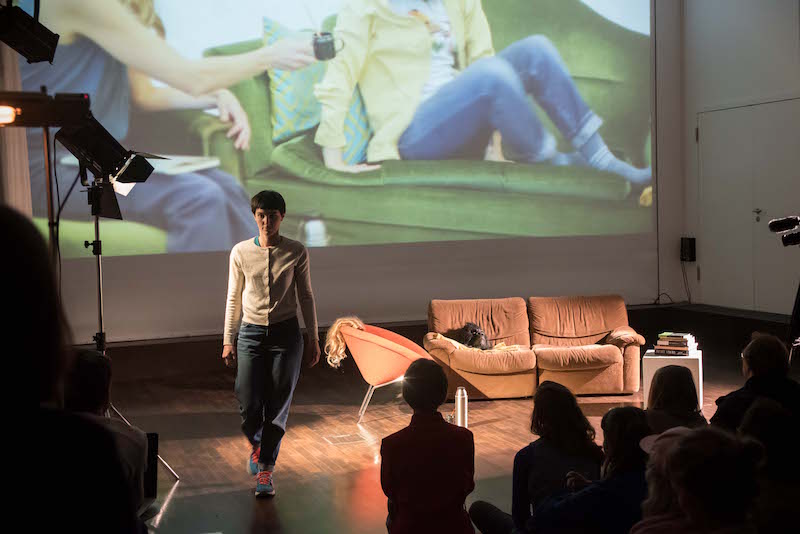 How is an animal, such as a gorilla, ‘other’ than us? This seemed to be the question that permeated ‘The Animal Looks Back’ by Miriam Jakob. In a sensitive edit of work-in-progress footage from the studio overlaid with a crisp conversation between the two performers, Jakob told the story of an encounter with a gorilla at the zoo. Covering her face with a gorilla mask, she looked into the camera with a piercing yet open gaze, as if to recreate the moment of connection she spoke of. The piece came to an anti-climactic end when the human-dressed-as-gorilla, much like a psychiatrist’s patient, perched on a couch and awkwardly drank from a cup. Although the performance felt too short, Jakob’s intriguing mix of documentation and set-design played with a narrative technique that gently inspired empathy for a strange being. 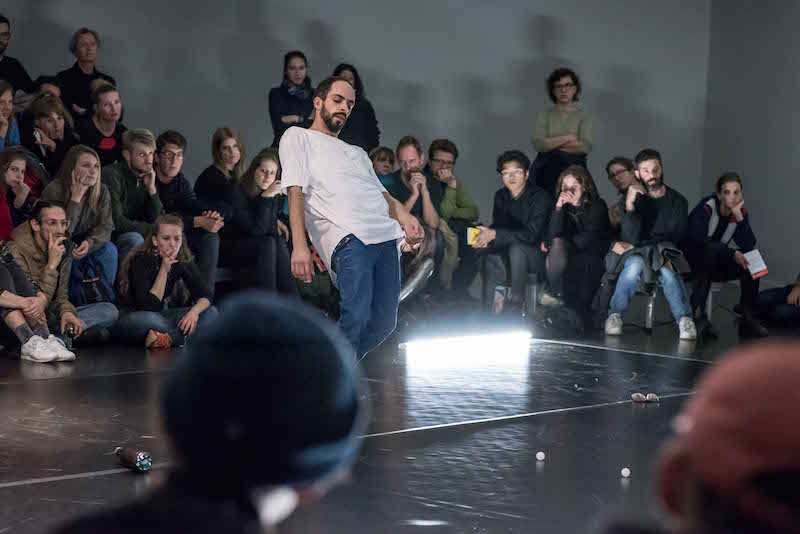 Donning a yellow cap and a matching bag, Csaba Molnár posed, statue-like, as electronic arpeggios rang out from his self-composed installation. With a dark floor underfoot, a single candle at the centre of the space and a landscaped channel containing crystal water at its edge, the scene was set for his anguished narrative of losing and regaining control over his body. In a series of sharp compulsions, he played with ping pong balls and a thermos can, shifting between the light and the heavy. Gradually, his fragmented movement vocabulary led him to undress until he was fully naked. The awkwardness of this was tangible, and although perhaps intentional, did not result in the desired effect. The piece ‘Watch Me Happening’ was instead carried by Molnár’s eye for design and the compelling manipulation of his environment. 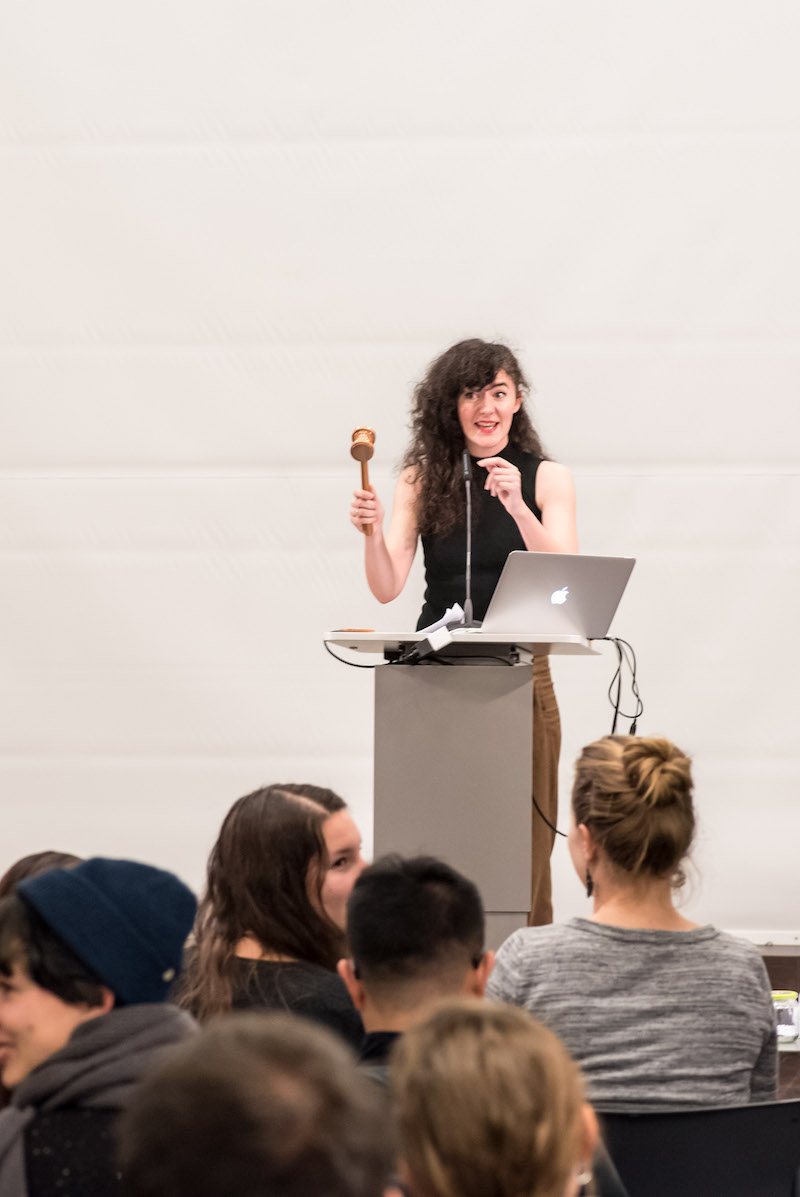 Following her research at the HZT on notions of authorship and the value of the artistic object, Dragana Bulut presented her findings through the inventive format of a performance art auction. On sale were various items, including an adaptable performance, a choreography by her mother, a jar containing ‘the state of being between reality and fiction’ and a t-shirt with ‘added artistic aura’. Maintaining the thrill of the game, Bulut managed to impressively drive up the prices. But as there was no obligation to spend money, audience participation became refreshingly autonomous. The exchanges of items for money were made afterwards, allowing for the performance to spill into real life. With audacity and wit, Bulut created a thought-provoking and entertaining experience that bridged the academic with the commercial and, in so doing, introduced a new form of performance art. 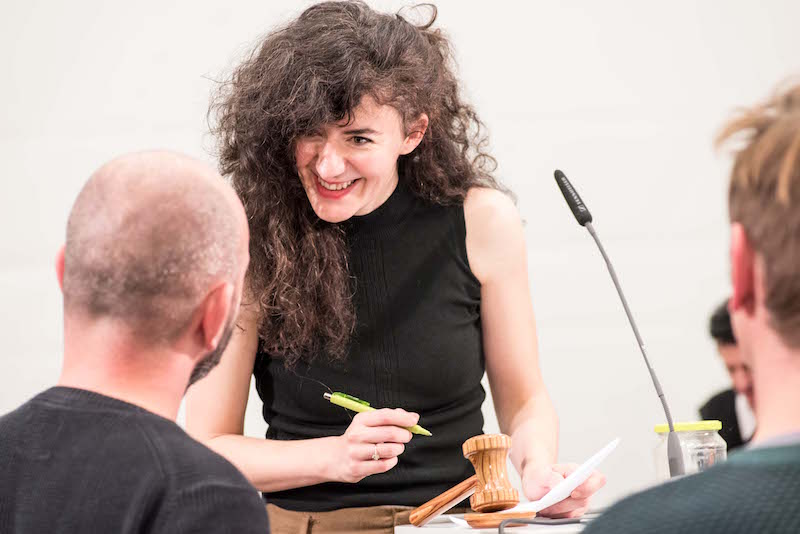 ‘Animalinside’ was fresh and lively. The four works played with different aspects of performance: the theatre group Mummy’s Sloppy Honey and Csaba Molnár created immersive experiences through the use of their performance space; Miriam Jakob enacted a narrative method to broach the relationship between animals and humans; and Dragana Bulut, by focussing on form, broadened the scope of performance art. Moving across genres and between floors, Montag Modus successfully transformed the CHB into a playground for both artists and audience alike.