Amidst the increasing friction between the U.S. and North Korea, curator Nadim Samman and Korean-American artist Mina Cheon have collaborated on a project and upcoming exhibition set to offer ‘matriarchal strength’, and a potential catalyst for Korean reunification, with the smuggling of contemporary art lessons into North Korea. The upcoming exhibition, ‘Umma: Mass Games – Motherly Love North Korea’ at Ethan Cohen New York, is a solo exhibition of new media artist, scholar, and educator Mina Cheon’s work. The exhibition concept began after a dialogue between Cheon and Samman regarding the process of smuggling cultural material into dictatorial countries and what effect this can have on that society.

In the exhibition, the artist works with her North Korean alter-ego Kim Il Soon the socialist realist painter, naval commander, farmer, scholar, teacher and mother in an attempt to combat the increasing contemptuous attitudes of the ‘demagogue Father figure’ throughout the country. Cheon has a keen interest in the reunion of Korea. For her solo show she worked with underground networks to send hundreds of USB drives containing performance lectures on contemporary art history into North Korea, arguably the first such artistic ‘re-programming’ engagement with the nation. The USB drives contain subjects such as ‘Money & Power’, ‘Abstract Art and Dreams’, ‘Feminism’, ‘Are We Equal?’, ‘Art Lives Matter’, ‘Social Justice’, ‘Remix and Appropriation Art’ and ‘Art & Technology’. These video lessons led by ‘Kim the Teacher’ will be on display along with Kim Il Soon’s painting series, ‘Hot Pink Drip’ and ‘Yves Klein Blue Drip’. Developed from the artist’s dreams, they incorporate digital manipulation and abstract painterly gestures with realist propaganda styles. The works and exhibition run during New York City’s ‘Asia Contemporary Art Week’ and are set to establish the UMMA (Mommy in Korean) Cult of maternal love, a solution for global peace and Korean unification. Paradoxes of the Korean imaginary are said to be on full display here. 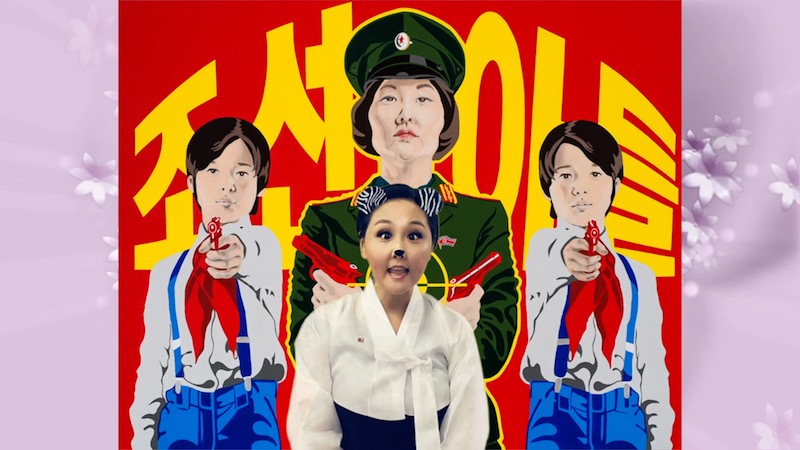 Prior to smuggling USBs into North Korea, Nadim Samman also curated the ‘4th Marrakech Biennale’,’Antarctopia: The Antarctic Pavilion 14th Venice Biennale of Architecture’, and ‘Treasure of Lima: A Buried Exhibition’—a unique site-specific exhibition on the remote Pacific island of Isla del Coco. He is also co-director of Import Projects in Berlin and is the Editor of Near East Magazine. Berlin Art Link caught up with Samman to inquire further into this project.

Kimberly Budd: This is a fascinating project that could really provoke and inspire North Korean citizens, could you talk us through the development of this idea after your initial discussions with Mina about smuggling? What kind of obstacles did you experience in the process?

Nadim Samman: The project stems from the fact that Mina’s art involves creating works that are attributed to alter-egos (characters). One of her key characters is a North Korean artist called Kim Il Soon who, as may be expected, normally paints in the official DPRK propaganda style. Lately, however, Kim has been having vivid dreams where she finds herself splashing International Klein Blue all over her otherwise completed canvases. In a sense, Kim dreams of a cosmopolitan cultural agency (under the sign of Yves Klein) and the prospect of an expression(ist) authorship that oversteps the ‘realist’ strictures concerning form and subject matter.

When I learnt about this body of work (that is, Mina making Kim’s dream paintings into a real series) I recalled my PHD research on the birth and reception of Soviet ‘unofficial’ art. To me, Kim Il Soon (and her reveries) represented a dream that there might actually be a nonconformist artist somewhere in North Korea. But where? So far, no one has heard of an underground current in North Korean art.

I knew that in both the USSR and China, access to previously restricted (art)historical materials, things like illicit copies of magazines like Flash Art, did have an impact on artists like Ilya Kabakov, Komar & Melamid, and others. As Mina and I spoke, it became clear to us that when underground art in North Korea is (eventually) born, access to unofficial (cosmopolitan) art historical narratives will play a decisive role. Instead of waiting, we realized that we might be able to plant that seed. What if people who watch the videos are inspired to begin an art practice, or change their existing one? What if the birth of contemporary (unofficial) art in North Korea begins with this project? The fact that the ‘lessons’/lectures are delivered not by a scholar, but by an artist performing in the alter-ego guise of one, makes the potential even more strange. Perhaps an artwork, such as this by Mina, might be the most effective culture virus.

KB: Can you define ‘artistic re-programming’ in this context? What exactly do you hope to achieve through the infiltration of the USBs?

NS: We can’t force anyone in North Korea do anything, nor do we want to. However, we have found that it is within our power (as international cultural workers, Mina in particular) to speak directly to a North Korean audience in a non-condescending manner, without going through the DPRK’s formidable gatekeeping apparatus. This is an audience who have actively sought out access to proscribed cultural products, only available through underground distribution networks; an audience that is hungry for alternative perspectives. This demographic, we think, seems most likely to contain the sort of individuals who might want to discover what else art can be in the DPRK.

We have no intention to ‘program’ the audience (as if persons who have gone to great risk to exercise intellectual/cultural freedoms just by accessing illegal content are that weak!). Rather, Mina and I realized that the distribution system itself is a channel whose programming/content has yet to deliver information about contemporary art. As such, this channel is a curatorial space that can be re-programmed. The ’10 Art History Lessons by Professor Kim’ (2017) cover topics like Art & Life; Art & Food; Art, Money & Power; Abstract Art & Dreams; Feminism; Social Justice; Remix & Appropriation; Art & Technology; Art & Silence; and even Art & Environment. The breadth of foci amount to a complete alternative to the official North Korean history of art, beginning with an alternative interpretation of what happened in 1917 – namely, Duchamp’s urinal as a contrasting proposition to the Russian Revolution.

Through our conversations, Mina and I have come to realize that North Korean art is epic mansplaining. The recent war of words between the North Korean and U.S. leaders makes it obvious that demagogue Father figures, and man-boy posturing, need to be outflanked. With this exhibition, Mina establishes the personality cult of UMMA (‘mommy’ in Korean), whose maternal love is deployed as the only acceptable solution for global peace and Korean unification. In a way, the video lecture aspect of this project explores whether a bit of momsplaining can be a seed for a brighter future. 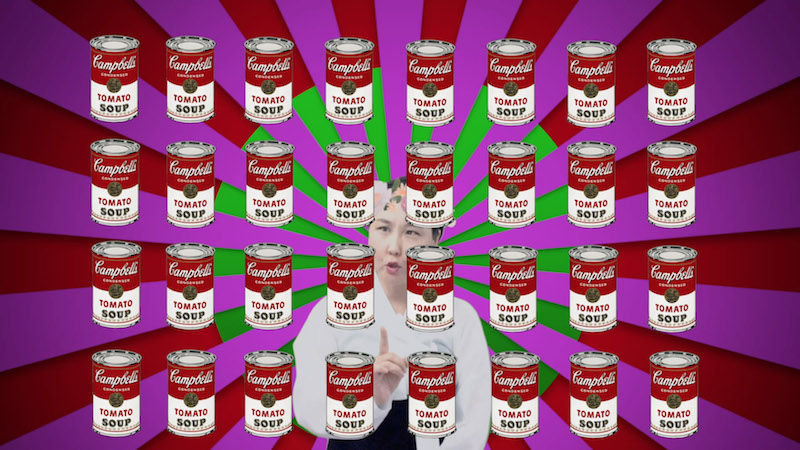 KB: The potential outcomes of this project are very exciting but a little risky, no? Were either of you nervous about smuggling the USBs? What would be the consequences if a government official discovered this information and traced it back to Mina, you and the exhibition?

NS: Mina collaborated with grassroots South Korean activist groups that include North Korean defectors. The USBs were carried into the North overland, via the border with China, and also sent by balloons over the DMZ from South Korea. These community activists are the ones who have taken a real risk, not us. However, it is a risk that they were already taking before Mina approached them. Obviously, all persons affiliated with the physical import of the lessons are anonymous for security reasons. However, it must be said that recent tensions between the DPRK and the USA have led some of our erstwhile collaborators to withdraw from the enterprise.

I should say, though, that this scheme mitigates an intellectual risk that could be entailed when putting on a show about North Korea within the safe confines of a Manhattan gallery (namely, that what is sanctioned in such a bubble is of no consequence to the space that it purports to engage). I think we’ve tried our best to design into our ‘artworld’ venture the possibility that it might mean something in North Korea.

KB: What are some other historical examples of the smuggling of cultural materials into countries that were successful in evoking change?

NS: The word smuggling has a risqué connotation, and we’re not interested in whether or not, in this case, it has a heroic dimension. As we see it, this project leverages the potential of a distribution channel that is beginning to play a greater role in (unofficial) cultural life within the DPRK. What I’m interested in, as I mentioned previously, is how the key conditions that engendered the birth of underground art in both the Soviet Union (in the 1960 and 1970s) and China, after 1979, include (but were not limited to) increased access to previously repressed dimensions of local and international art history. Similar things happened in other countries behind the iron curtain. As a historical trend, you might call this phenomenon one pillar of post-Soviet art. The DPRK is the only 20th Century Soviet-style state left, so it stands to reason that we might be on to something.

KB: What elements does Mina believe are integral for the re-unification of Korea?

NS: I should just quote Mina here: “My dedication to sharing art with North Koreans equals my dedication for humanizing North Koreans in the eyes of the world. For most Koreans, whether in the North or the South, we are one: we dream of unification. With this project, we advocate that North Korean lives matter; and we plead, please do not destroy North Korea for the sake of global peace.” 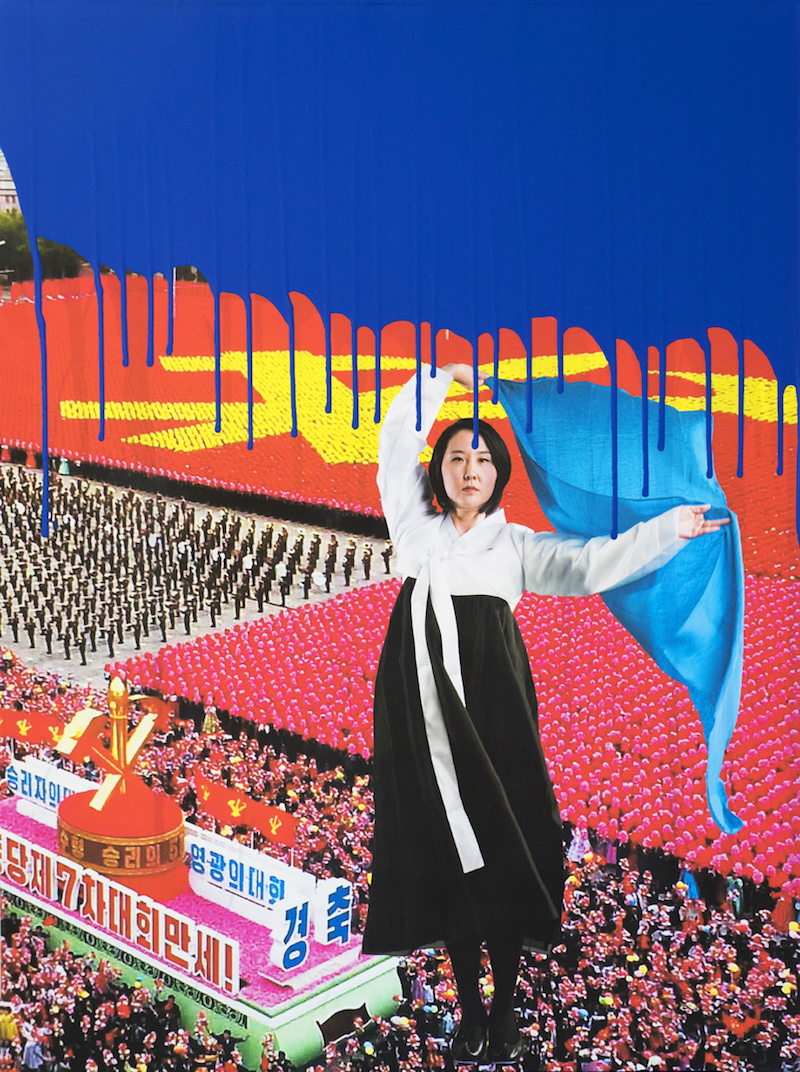 KB: It sounds as though the exhibition could develop into future projects. What are Mina and your plans with this concept? How would you like to see this progress after the Ethan Cohen exhibition?

NS: We can do more with the distribution channel, though I don’t want to give too much away. Some years down the line, perhaps, we would be gratified to make contact with someone from the North who has seen the lectures. It would be a real dream to connect with an underground artist who got something out of them. Stranger things have happened…we will them every day.