William F. Buckley once said, “History is the polemics of the victor,” but in Geoffrey Farmer‘s account, it’s hard to discern who has won. Farmer, who represented Canada in this year’s Venice Biennale, has become widely known for constructions of images, which he collects in “reservoirs” over long periods of time. For Farmer, the image is tool, not creation. Through methods from laborious assemblage to computer-generated integration, the artist questions the temporality of images: where do they originate and where do they propagate, from whom and for whom? Geoffrey Farmer’s ‘The Care With Which The Rain Is Wrong’ at Schinkel Pavillon creates a space for us to process the hyper-saturation of images in our increasingly digital lives.

Farmer does not alter illustrations; instead, he crafts contexts. The Schinkel exhibition is relatively small – it only contains two works, each of which has each been shown before. However, Farmer’s works are in continuous states of flux; adding images from his ever-expanding archive and accounting for the size of each new venue, Farmer instills a fresh, and nonetheless overwhelming, experience in each iteration of his work. 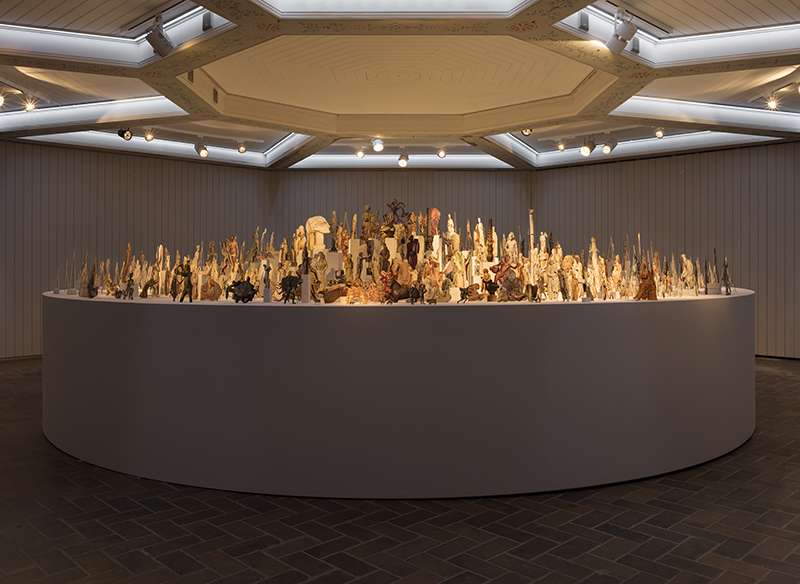 If you could have a dinner party with any historical figure, alive or dead, whom would you include? While Judy Chicago answers the question with pioneering women, Farmer partakes in a similar fantasy with the lives of sculptures. ‘Boneyard’ unites works from ‘Maestri Della Sculptura’, a collection of art monographs printed by Milanese publishing brothers Fratelli Fabbri. The space does not suggest that of a hoarder—each carefully arranged object has too much autonomy—but rather of a meticulous archivist. Farmer creates a dramatically-lit tableau, which viewers can circumambulate to observe the hand-cut, free-standing figures and the structural mechanisms behind them. ‘Boneyard’ is no graveyard: the figures are very much alive, resurrected from the horizontality of their life on the page, unearthed from their original cultures and the dominant narratives of our own.

‘Boneyard’ blends iconicity — from Michelangelo‘s 1504 ‘David’ to Henry Moore‘s 1939 ‘Reclining Figure’ — with obscurity – from tiny religious idols to stark constructivist sculptures. Farmer employs the very familiarity with which we identify these individual works to question the structures that engender our affinities towards certain objects. As viewers weave in and out of the crowds of objects, they embark on a sculptural retrospective across cultural geographies and political movements. Farmer underscores the patriarchal, Eurocentric bias of our understanding and appreciation of sculpture. Nonetheless, the work only highlights a systemic issue; it does not propose a solution. 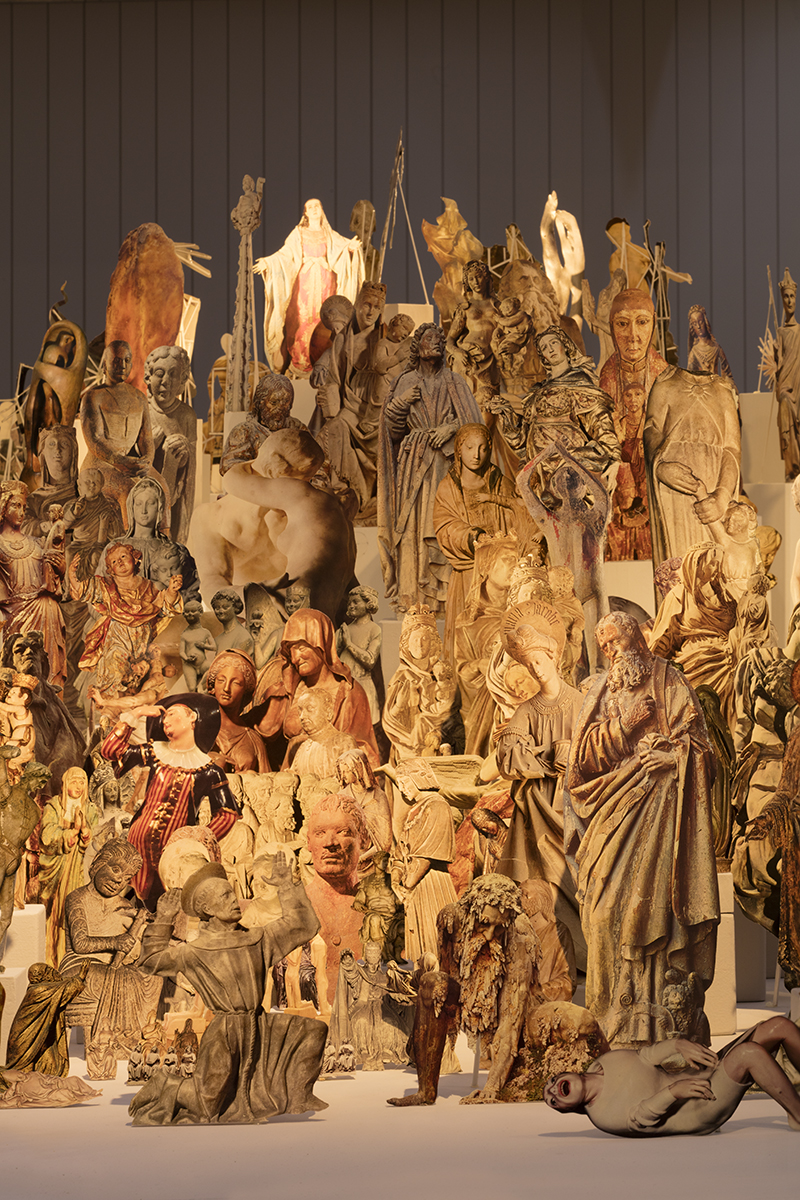 Farmer’s own system of classification is not without flaws. He numbers several objects in accordance with a painfully unrelated index that does not correlate to the content of the original artwork or a reasonable formal interpretation thereof. These texts prove superfluous to reinforce his cogent visual argument of the persistent elasticity of images and the plurality of their interpretation. 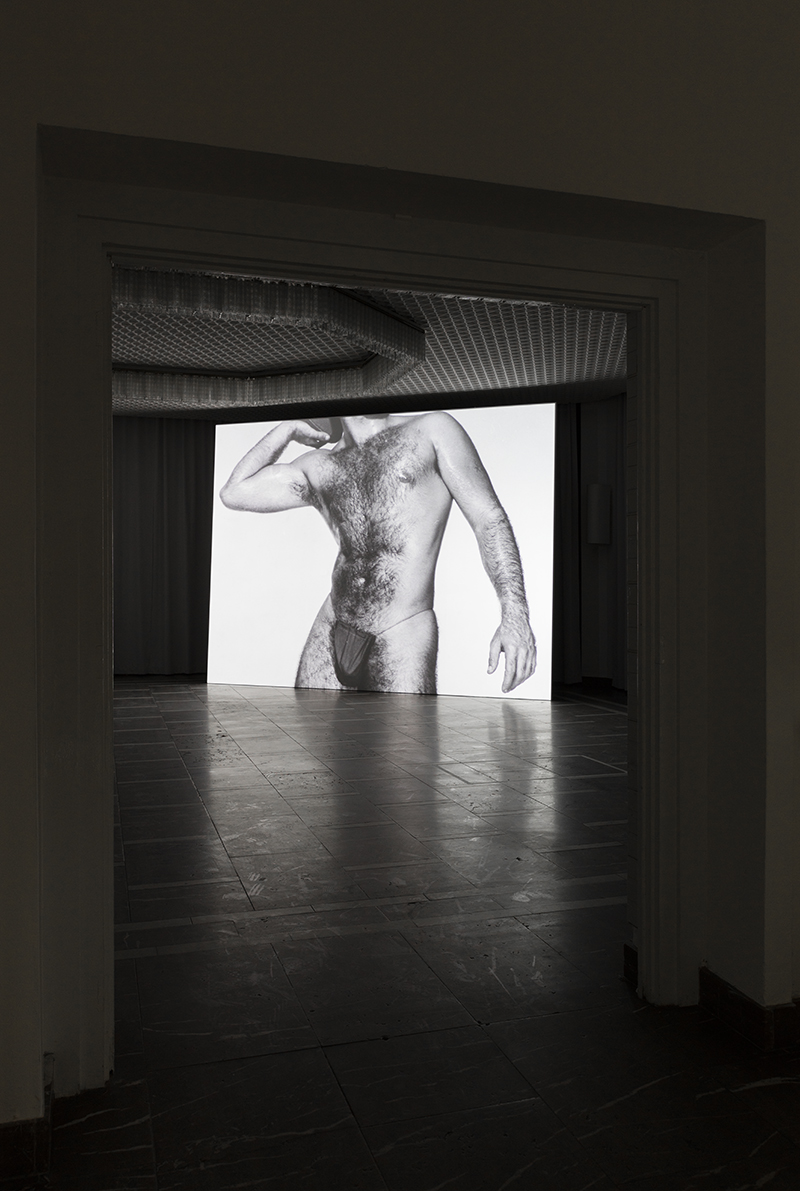 While many artists today employ the artist-as-archivist method of working—from Christian Marclay with film to Mark Dion with nature—it is precisely the tension between analog and digital in the breadth of Geoffrey Farmer’s works that distinguishes him from the rest, helping us to understand the cybernetics of our daily lives. The tangibility of ‘Boneyard’ embodies thousands of open Google Chrome tabs. In ‘Look in my face; my name is Might-have-been; I am also called No-more, Too-late, Farewell’ the viewer witnesses Farmer’s very own archival ‘wikirace’. Though there is no clear narrative, Farmer’s histories may evidence the conquest of culture over nature, to put things back in Buckley’s terms. Or perhaps they mark the triumph of the viewer and the forfeiture of the artist. Ultimately, it is clear that in ‘The Care With Which The Rain Is Wrong’ Geoffrey Farmer comes out victorious.