While so many artists address our current political and cultural moment with works drawn on their own identities, Melike Kara employs a radically different approach: anonymity. In ‘Köpek’, her second solo-show with Peres Projects, the artist—who recently graduated from the Dusseldorf Art Academy, where she studied with Rosemarie Trockel—presents figures who exist only within the worlds of their bare canvases. With gestural brushwork Kara illustrates an essential humanity; her figures do not explore their own individuality, but rather fundamental interaction between beings. She juxtaposes these actors, whose present states bear no trace of personal histories, with the culturally specific, photographic wallpaper on which many of the paintings hang. The ambiguity of Kara’s characters—deified or dangerous, “gods” or “monsters”—forms dystopian and utopian tableaus of exchange. 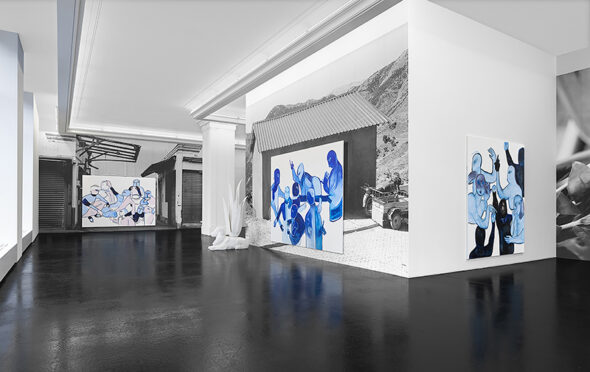 Kara depicts dramatic interactions between her figures through single layers of wet, viscous paint. Her works recall the static ferocity of Greek black-figure pottery, combined with the nondescript physiognomy of Nicole Eisenmann‘s aluminum cast, face sculptures. Though their backgrounds are plain, the figures are not born on a layer of gessoed canvas that suggests a tabula rasa, but rather they stand against a queerly barren environment whose subtle white brushstrokes assert a subdued energy. Each figure acts and is acted upon, and some gaze towards the viewer as if to seek validation for their engagements. Their world is not bound to rules of law or nature, and it is only our viewing, in relation to our own experiences, that may probe morality. 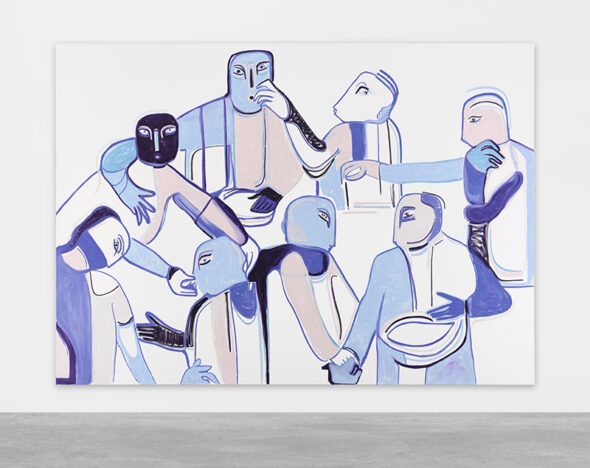 In the press text accompanying the exhibition, Tenzing Barshee declares: “You can argue how migration stimulates the economy, or try to explain how structural racism happens anywhere. You can debate the validity of the nation state, and claim that identity is constructed like a flag on the moon. You might call for radical change, but that doesn’t change how people feel about these topics. How they feel depends on who they are, where they are, and how they’re able to relate their particular past.” However, the figures are stripped of, or perhaps engendered without, identity. We are confronted with action without discernible motivation, which proves difficult in reading a psychological subtext of the paintings. We have nothing but intuition to analyze their individualities. Are their actions familial or combative?

Peres Projects asserts that “the works represent scenes of human interaction without any reference to gender, age or culture.” Kara largely realizes this perhaps idealistic claim while still granting an autonomy to each participant. Her figures are not facsimiles of each other, and each character bares distinct physical features and color arrangements. Kara breaks free from the gendered nature of a palette with pale pinks and periwinkles—liberated from the confines of the baby shower aisle—in rich combinations with navies, blacks, and whites to instill a harmony within each individual. However, while gender and age may be indeterminate in the work, the artist does not always successfully eschew race. In ‘all vanish’, the bottom row of figures, whose faces are darker and cooler than the warm black of the background, are separated below the light-faced figures as if to imply that they are divided by physical appearance. A discernible position on race by the artist is unclear. Kara attempts to isolate nature, in the purity of interaction between figures, from nurture, characterized by the specificity of their environments. 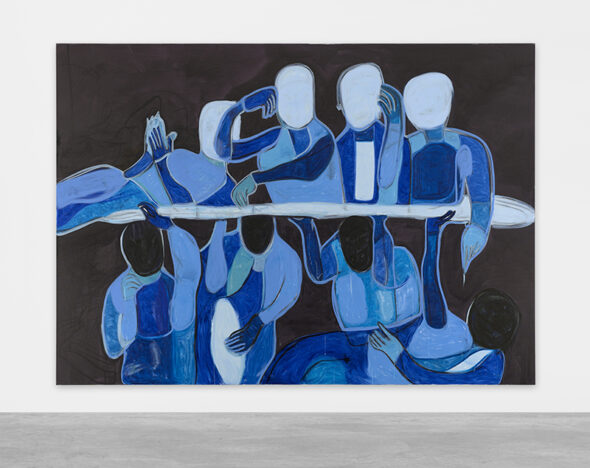 Many of the paintings hang on scenes of Germany and Turkey, the two nations of the artist’s ‘home,’ in photographic wallpaper. Although Kara alleges that these are distinct works, not installations, together the photographic environments emphasize the dearth of context for the painted figures. The empty landscapes, devoid of humans, suspend nature before it becomes nurture. The photographs frame the paintings, but we are never given a full view into their worlds because they are blocked by the canvases themselves. This suggests that an immunity to influence is only achieved in the fictitious world of art. The photographs, though from the nations of the artist’s upbringing, do not suggest a personal sense of home, but rather a sense of alienation for the figures.

The only impetus for discussing Kara’s sculptures is titular; “Köpek,” the Turkish word for ‘dog’ presents an animalistic perspective on ambiguous identity, for we cannot tell the gender, age, or origin of the dogs. The sculptures are raw and static, contrasting the potent interaction she explores in her paintings. Their humanlike stance is stoic, and the rough carving of the wood, washed with lime, refutes the energy that she composes on canvas. “Dogs that run after each other / are less lonely,” Kara writes, but we should leave the sculptures alone and focus our attention on the walls. 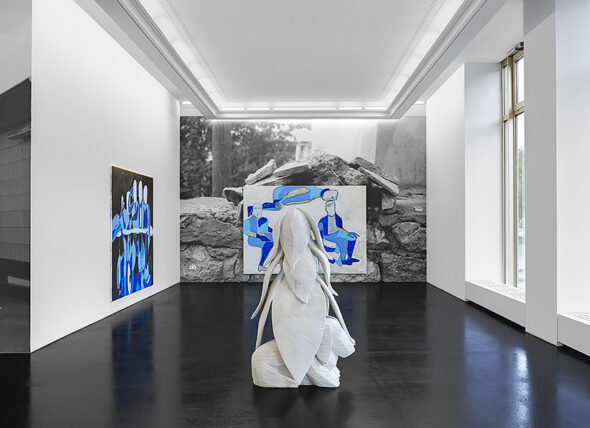 To make apolitical work today has become a political act in and of itself. In a world in which we only experience anonymity virtually, Melike Kara imagines the physicality of anonymous interactions. Although nondescript, the figures are not invisible or unknowable, but perhaps evidence that this autonomy and unity can only interact in the fiction of paint. The identity of her figures intrigue us because we do not know where to place them: to assess their individuality without analyzing their place in the system goes against our learned social justice rhetoric that is becoming increasingly visible in the art world today.