Tradition at Bayreuth, a festival conceived by German opera visionary Richard Wagner and utilized in 1882 to premiere his final work, ‘Parsifal’, forbids the audience from applauding at the end of the first act. After being denied the ‘Parisfal’ production in Bayreuth, Berlin-based painter and performance artist Jonathan Meese (Director, Stage Designer, Costume Designer) teamed up with Bernhard Lang (Libretto) to defile convention and accelerate the show lightyears into the future. A vehement roar of cheering erupts at Berliner Festspiele after Act I of ‘Mondparsifal Beta 9–23’ – whose ‘Alpha 1–8’ version premiered in Vienna this June – at just the tip of the iceberg of radical discrepancies between the two shows, or perhaps more aptly put, experiences. Meese and Lang, contemporary opera bad boys, blend moon landings, Spongebob Squarepants and seat-shaking vibrato into a bitter cocktail of rule-bending performance. Wagner probably never foresaw his “festival play” with actors in leather loincloths rubbing toothbrushes against their genitals; this scene is among the many telltale signs that we cannot assess ‘Mondparsifal Beta 9–23’ as a reworking, but rather as a complete overhaul of ‘Parsifal’, only vestiges of lyrics and leitmotifs intact. 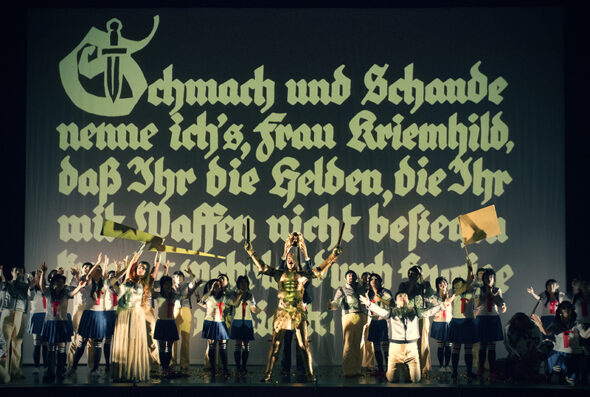 The opera envisages future relationships between Kunst (“Art”) and ideology. Meese sets the play in K.U.N.S.T., a lunar dictatorship that purports political and temporal independence from our current belief systems. The power of its dictator derives from Art; Meese uses this metaphor to liberate the characters from political and religious ideologies. While Wagner’s protagonists are motivated by their quest for the holy grail, Meese’s characters both seek out and frolic in artistic liberation. A direct correlation for the quest, like most other parallels between the two works, is difficult to discern in Meese’s adaptation; the audience, like the actors themselves, gets lost. One could argue Art as an ideology (illustrated by the process of the characters’ creations or the audience’s witness of the opera itself as a pièce de résistance) has replaced the holy grail, but it seems more likely that Meese has disregarded plot altogether, basking in the show’s frivolous descent into chaos. We are left without a clear narrative to follow, sans quest in which to invest. What do we make of the refrigerators of curing meats and the cliques of anime schoolgirls? While the avant-garde vigor of the show can entertain and exhilarate, at other times it unfolds into pandemonium. 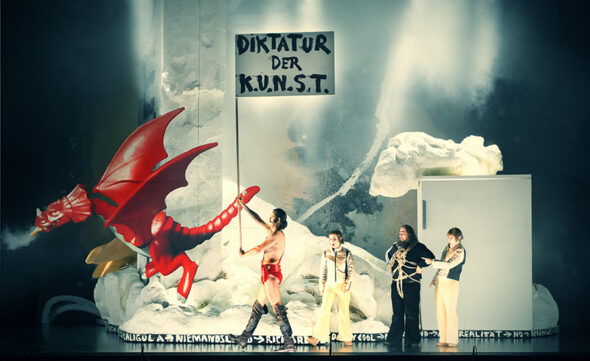 Conducted by Simone Young, a Wagner specialist and one of the most acclaimed opera conductors in Europe today, ‘Mondparsifal Beta 9–23’ manifests vocal mastery and unparalleled finesse. Bernhard Lang employs an “ellipses” technique of infinite melodies, often looping lyrics in repeated eruptions. Lang coins his looping method as “semantic explosions,” supplanting the linearity of the score and revealing new layers of meaning in the opera. The frequency of repeated lyrics, the analogue of a broken record, is stronger as a conceptual tactic than for sonic enjoyment, however. The lyrics reveal themselves in white letters projected on adjacent walls of the theater, and a red subtext that scrolls throughout the operatic endeavor brilliantly traces Meese’s own musings; the English, French, and German lyrics are translated into the director’s ideological decrees, such as Kunst ist ultimativste Dienstpflicht.

In the space within and beyond the opera, Meese fabricates philosophical claims that do not come through in the work itself. “Absolutely understand that art is not culture! Art is tomorrow, culture is yesterday. Art doubts everything, even itself, far beyond infinity!” His strategy diverges from the aims of many contemporary theatres that use the work of the past to assess the politics of our time; instead, Meese imagines the implications of an otherworldly universe drenched in art and devoid of ideology. This ideological vacuum isolates symbols from their original contexts in a manner that often leaves us confused. How do you de-politicize two astronauts staking Chinese and American flags into the moon? Low-culture is conflated (but not elevated as in Pop Art) with high culture in a hodgepodge of visual and vocal references from Spongebob to Schopenhauer. Without a plot in which to interpret the content, Meese’s symbols become as unsupported as his metaphysical assertions. He declares that man without ideology is the prototype of the artist, an autonomy that manifests itself as aimlessness in his on-stage cameos. Meese saunters across the set in his signature Adidas tracksuit several times, reminding us that celebrity alone cannot sustain the promise of the full house it attracted. 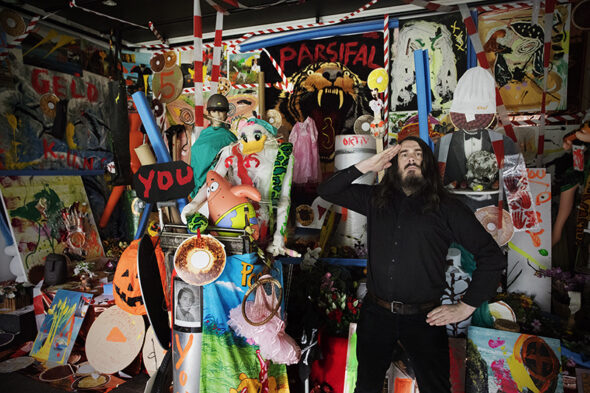 Richard Wagner revolutionized opera with his groundbreaking idea of Gesamtkunstwerk (“total work of art”), which sought to combine poetry, music, drama and visual art. This concept bleeds into the work of Meese, whose pot knows no limit of ingredients, in ‘Mondparsifal Beta 9–23’ and his artistic practice at large. He attempts to extend the opera into the lobby in an ejaculation of mannequins, stuffed snakes, Jeeps, and jack-o-lanterns that comprise an installation, along with the erratic and esoteric laws of Art he scrawls onto the walls. Whereas on stage Meese creates a unique world in which these signs can exist, in the lobby he tries to insert them into our own reality, which contradicts the ethos of his opera at large. Many people peer over these decorative installations to the bar beyond them, whose promise of white wine and pretzels may get them through the remaining acts. The vibrancy of applause wanes after Act I of the four-plus hour performance, as does the crowd. Bernhard Lang jokes, in a way that feels all too real, that the answer to the final line of the overscaled opera “You know where you can find me,” ends up being “probably outside by the bar.”