Do you remember the smell of your grandmother’s soap? The liquid kind she made you lather between your hands before the meal, standing on your tiptoes to reach the countertop faucet. Its scent, the prelude to Christmas dinner and the epilogue to a day spent in the backyard. The fragrance of artificial fruit, sometimes lemon, usually orange. Well, this is not your grandmother’s soap. 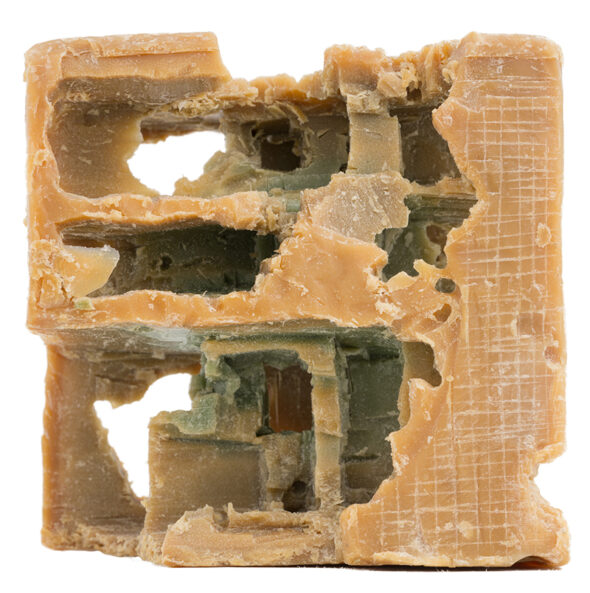 At Benhadj & Dijilali Galerie the odor of Emmanuel Tussore’s ‘Study for Soap’ hits you as soon as you open the gallery door: sterile but not pleasant, quiet but not latent. In his first German solo exhibition, Monaco-born Tussore studies the physical, cultural, and economic properties of the bar of soap as decoration, structure, and symbol. The artist scrutinizes Aleppo soap, the oldest soap in the world—which predates grandma by more than a few years—in expansive installations, intricate sculptures, and architectural photographs.

In a series of miniscule sculptures, each entitled ‘Home’, Tussore investigates the soap bar’s modularity. Gridded scratches flank the cavities of delicate rooms and decaying windows, whose damage suggests both natural erosion and human combat. Tussore’s ‘homes’ are uninhabited ruins that indicate the labor of the artist, both architect and construction worker. The ephemerality of their materialization evidences both durability and delicacy; the awe Medardo Rosso captures in wax, Emmanuel Tussore achieves with soap. This soap appears like clay, confronting us with its relationship to the earth and the foundations of our civilization. 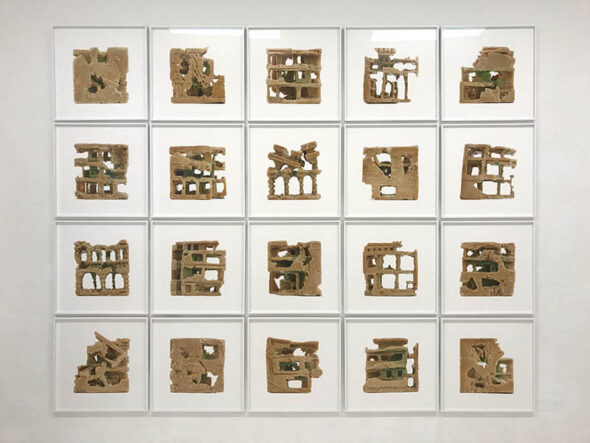 Tussore investigates Aleppo soap, which hails from the eponymous Syrian city, as metaphor for the contemporary physical and cultural destruction of its origin. The soap’s devastation visualizes the current state of the nation at war, carved into and carved away. The artist imports a place in the form of a material good, a refined product transformed into symbol of evisceration. The artist asserts: “Aleppo soap represents several thousands of years of culture and history. It’s the emblem of the city, reflecting an old, refined civilization.” Documenting cultural moments in photographs, Tussore blurs the boundaries of sculpture and architecture in serial grids that echo the work of Bernd and Hilla Becher.

The most confrontational element of Tussore’s exhibition is his installation, the construction of new space in the gallery itself. He piles soap bars in brick-like layers that assert the emergence of edifices or the ruins of those past. Inside these walls, eight cameras survey a sculpture on shifting monitors that capture the object, environment, and viewer. “If you have to leave your home due to a war and you then become a refugee, you also lose your privacy. Cameras follow you everywhere. You’re constantly filmed. This means non-stop oppression and surveillance. By using black and white video images, I am referring to the typical war footage produced by drones that we see ad nauseam in the media. These images of demolished cities are in our heads now; they’re common, shared footage,” Tussore asserts in an interview with DAMNº. The artist draws on his own memories to carve the soap bars and construct new spaces, using ingrained media images over photographs of the land. This extends the bar of soap to a symbol of collective memory and external contact.

Scent is the sense most strongly associated with remembrance, and a whiff of Tussore’s ‘Study for Soap’ may even evoke memories you have never experienced firsthand. Amidst international crises, the artist transforms a hygienic product—through aesthetics, histories, and our olfactory system—into a cultural signifier. ‘Study for Soap’ is really a study for the building blocks of the world around us, an excavation of personal utility, artisanal tradition, and global communication.