During the transitional period from the German Democratic Republic (GDR) through the reunification era to the present, many sociopolitical changes have occurred in East Germany. ‘Shifting Perspectives’ at Zentrum für Kunst und öffentlichen Raum (ZKR) focuses not only on these specific transformations, but on artists’ shifting views of this volatile region. Drawing largely from the collection of the Brandenburg Museum for Modern Art, the exhibition uses photographic and cinematic work by 22 artists to explore the development of identity in relation to public space. Recognizing the evolution–in both geography and narrative–of this region helps us understand the stories of its people and civic life today. ‘Shifting Perspectives’ at ZKR ultimately investigates various artistic positions on this region’s landscapes: political, physical, social, and temporal. 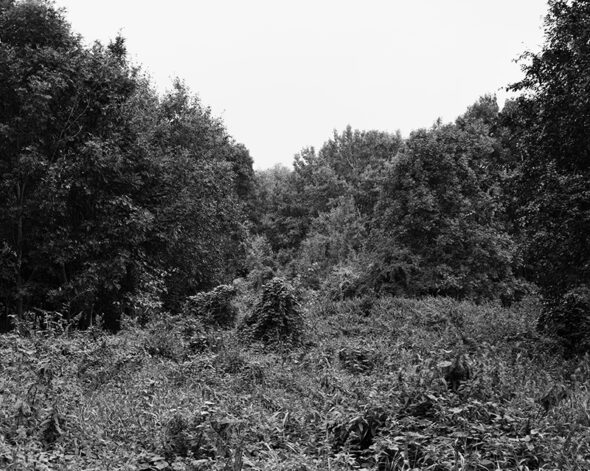 How should we inhabit empty land? Anne Heinlein’s conceptual photography charges us to reexamine desolate areas of East Germany and occupy them with our gaze. Between 1952 and 1988, tens of thousands of people were forcibly relocated by the Socialist Unity Party of Germany (SED) regime, and entire communities were demolished. ‘Jahrsau’, part of her larger series ‘Wüstungen’ that deals with the disappearance of settlements on the periphery of the GDR, captures a border area that has become a nature reserve. With its chronicles overgrown, what appears innocuous for the viewer proves fallacious through further inquiry. Heinlein traces the various histories of the region and our account thereof in her caption, “Kreis Salzwedel, Saxony-Anhalt, first mentioned in documents: 1390, vandalized: 1970”, conflating various temporalities in a single image. Her narrative functions more linguistically than visually; overall, the exhibition could provide more context to the immediate viewing experience, as sometimes it feels like there is desolate land where adequate wall labels should be. The appearance of coveted territory in Heinlein’s photographs ultimately manifests lost hope for a reclamation of home. The artist scrutinizes the land as devoid of both physical inhabitants and a space within our collective memories; the installation of her photographs engulfs viewers, which makes them question their own, central, positionality. Anne Heinlein’s perspective reveals historical entropy within visual order; although she does not make visible the invisible, she engenders its consideration.

While Anne Heinlein captures nature untouched, Arno Fischer captures culture unclaimed. In the series ‘Hohenlychen’, he explores a 1902 Red Cross welfare center transformed into a hospital and training facility in WWI that then became a hospital for injured soldiers during WWII. Eventually, the site became a Soviet military hospital of the Red Army; while its fundamental purpose of healing remains unchanged, the physical structures and competing ideologies never seem to be fully resolved. We begin to understand the site as an object of its cultural environment, though Fischer presents it as subject in his photographs. Like in the work of Heinlein, most of this information is supra-visual; these images do not track the various changes, but their conceptual discourse may. While these artists document the vestiges of everyday life in East Germany, other photographers in the exhibition detail the lives of the inhabitants themselves. 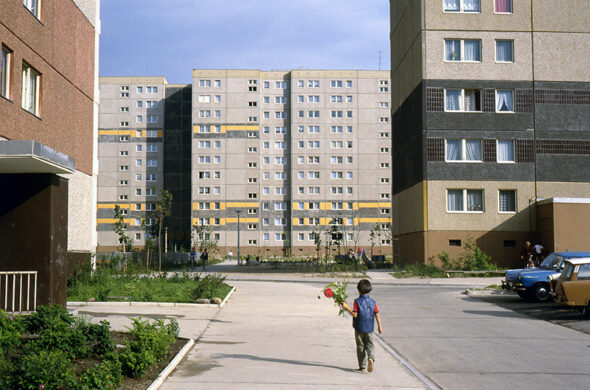 Austrian-Japanese artist Seiichi Furuya moved to the capital of the GDR in the 1980s with his wife and son. After his wife’s tragic suicide on October 7, 1985, the 35th anniversary of the GDR, his cautious, documentary photography captures quotidian streets and alludes to the experience of raising a child alone. Furaya’s ‘Berlin-Ost 1987’ documents his child walking with flowers, a sign of hope above his far-stretching shadow, towards new apartment buildings. By investigating the environment’s relationship to the child, we imagine the formation of his psyche and anticipate his growing up in the surrounding urbanity. Furuya’s photographs straddle personal and political boundaries in sequences of memories that lament loss and portend new beginnings.

Tobias Zielony, one of Germany’s top contemporary photographers, captures youth grown grungier, arrested in his notorious images of underground adolescent culture. By photographing those shunned by society, Zielony transforms the villains of the media’s “problem districts” into the protagonists of his series “Ha Neu”. Zielony’s “Sommer, 2003” records a group of teens idling on the side of the road. Their actions are unclear, but their tilted, obscured, and blurred faces recall casual parking lot conversations that savor banality. While a distant apartment building evokes those captured by Furuya, the clothing and body language of the teens give more insight into their identities than the space in which they lurk. The interactions of Zielony’s subjects occur in, not with, their surroundings. The artist creates a brilliant tension between individual and group mentalities in these photographs, basking in a present moment that does not long for a better future. 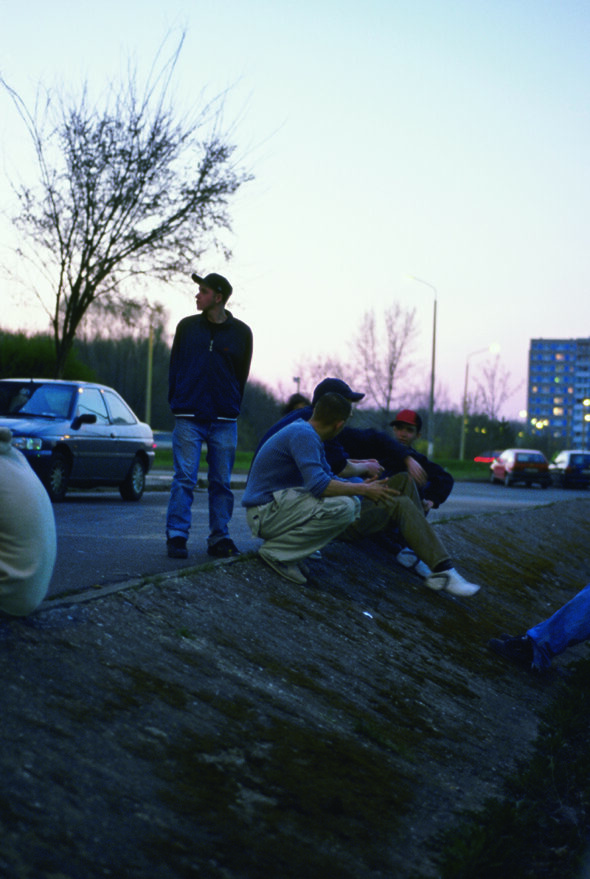 One of the most exciting elements of the exhibition is not captured in photography at all, but rather in the synthesis of sculpture, installation, architecture, and exhibition design by raumlaborberlin. Inspired by the architectural gaps and urban rupture of post-unification Berlin, the pioneering firm seeks to explore concurrent ideologies by relocating forgotten spaces. They utilize doorways from prefabricated housing blocks in the GDR to hang artworks and form benches in the exhibition. The pulse of raumlaborberlin is integrated into the exhibition as object, design, structure, and material. However, the odd monologue of sculpture in a central installation feels more like an attempt to fill space than to connect appropriately to an exhibition of photographs. While the photographs capture contexts, raumlaborberlin extends the longevity of these objects and alters their memories, prompting us to confront our contemporary perspectives on these forgotten spaces. 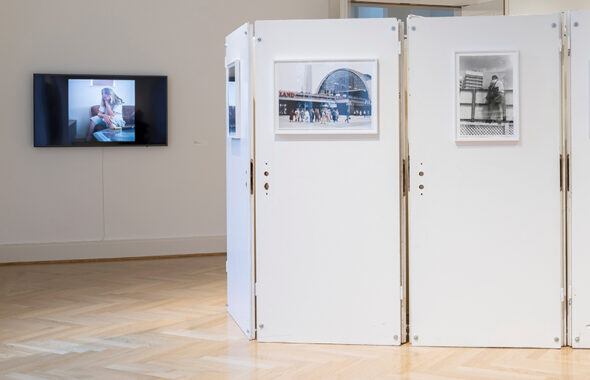 We cannot understand public space until we understand the public–the inhabitants, customs, and conditions of an urban system in flux. Photography, as a documentary tool of both photographer and subject, evidences a moment of change; however, very rarely can the medium trace the histories of transformations in a single image. The congregation of these images, through the perspectives of their various authors, help us understand the vicissitudes of East Germany. Who decides which places will disappear? We do, in the construction of space and narrative. Through photography and exhibition design, ‘Shifting Perspectives’ presents powerful works of various accounts of East Germany; although it provides a clear framework, the exhibition lacks a cogent thesis of what we are to make of these different perspectives. The works, in facts and fiction, capture everyday transience and visualize hidden stories; the exhibition makes us question our own process of memory and memorialization, which is crucial in helping us realize an informed future.