ON/OFF renovated and revived a former motorcycle workshop to build their current studio headquarters in Berlin; like every project the office undertakes, intentional ideas are built from the ground up. ON/OFF does not just design, they intervene in physical space. Their hand-built office is coupled and completed with a woodworking studio, and there is a hybrid java-pine scent that seeps into the adjacent courtyard. What they lack in square meters they make up for in ingenuity; replete with surprise sliding desk drawers and boundless modular storage cabinets, the space is a beautifully hand-crafted, ever-evolving creativity lab in-flux. 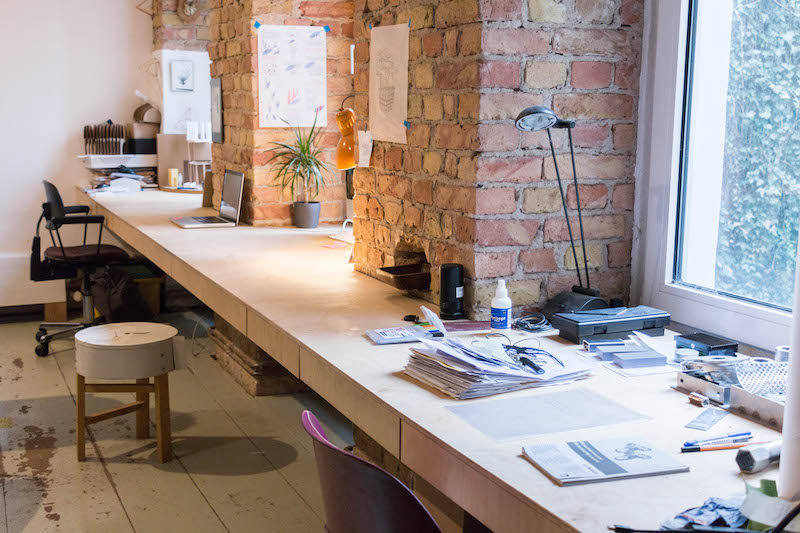 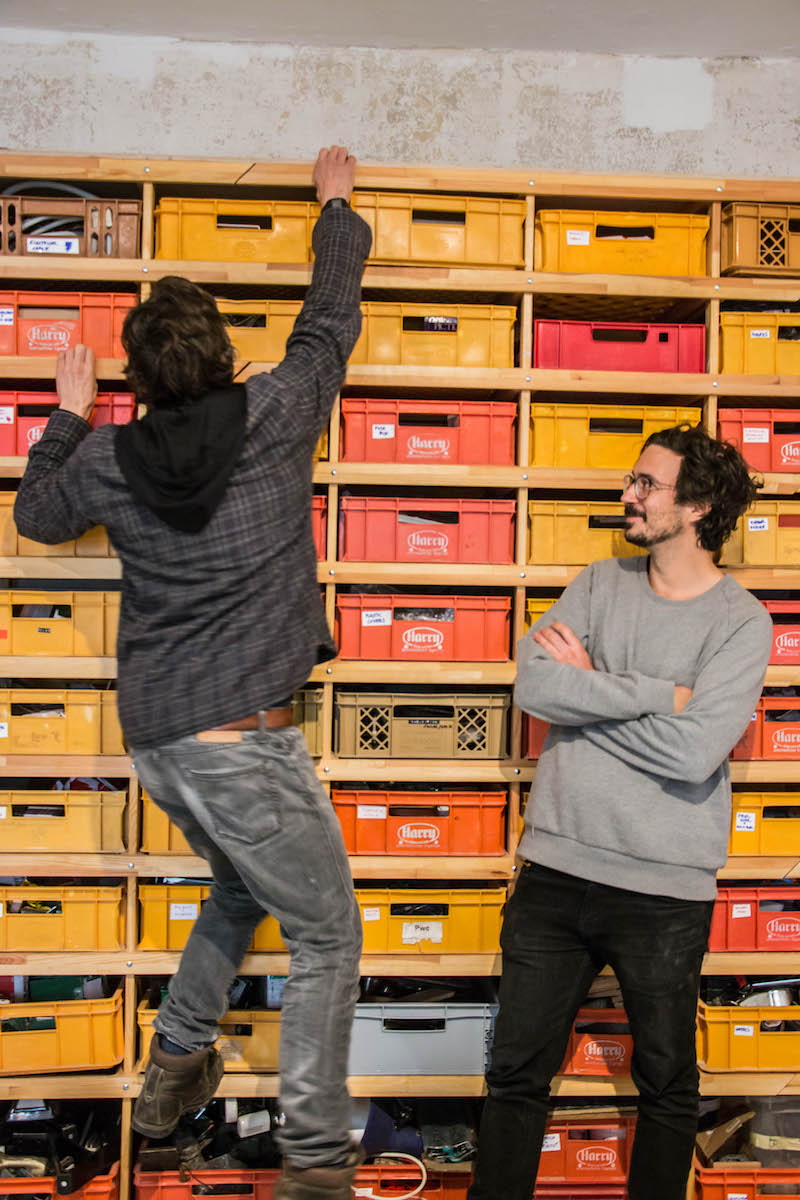 Founded in 2012, ON/OFF was conceived of by international architects and designers in Berlin who resented the model of office hierarchies with private interests that had become an industry norm. Berlin Art Link recently sat down with Dan Dorocic and Berk Asal, two of the ‘sixish’ core members of ON/OFF, which they co-founded to refute the mainstream politics of architecture-as-commodity. The two designers sit on beautiful handmade stools from salvaged wood and upcycled industrial toilet paper containers, characterized by coffee stains that recall long nights in the studio. The collective’s name comes from the self-critical experimentation in their work—which can be right ‘on’ or a little ‘off’–and the shifting architects working on a project, who can choose to engage or stay on the sidelines (which often means at their day job). Though each of its members will give you a different spin on what, exactly, ON/OFF is about, their projects and philosophy can be characterized by mobility, interactivity, reuse and public intervention. 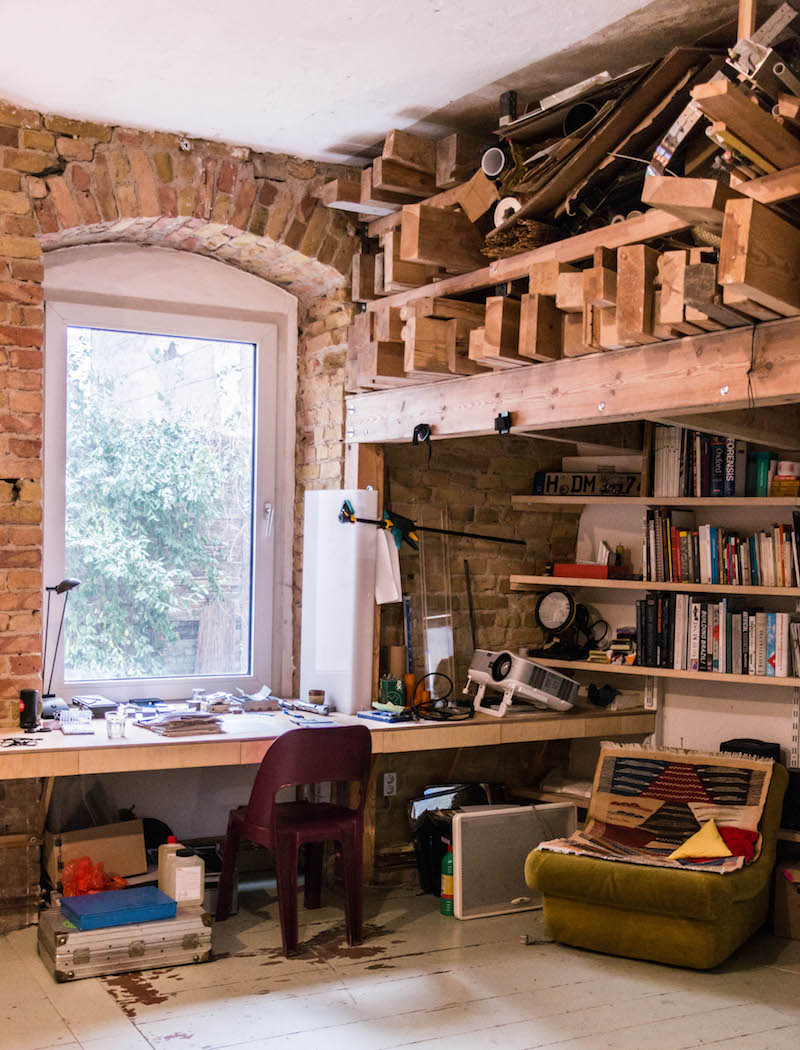 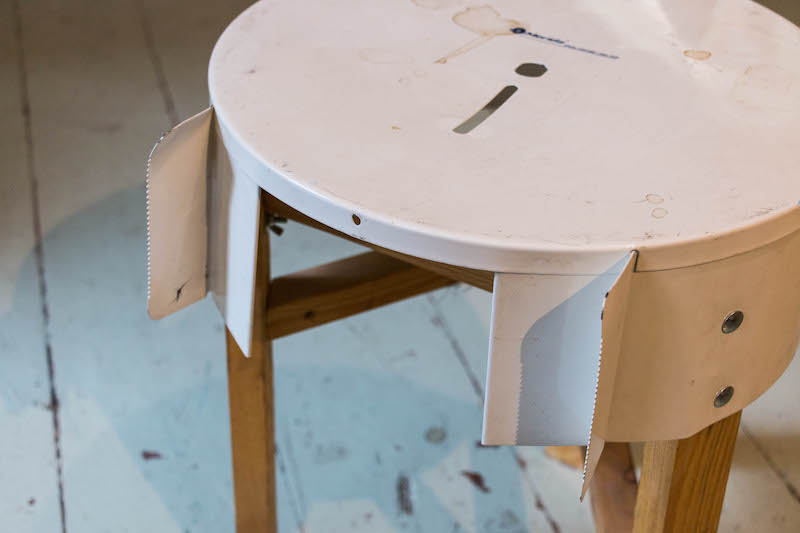 ‘Kopf Kino’, the self-initiated project that marked ON/OFF’s conception, is a traveling monolith sculpture and projector that amplifies live street actions onto the facades of cities. Citizens become performers in their normal environments, and bare walls transform into empty canvases. The project premiered in Berlin, which Dorocic notes has a special social fabric that excites and inspires them. They see a distinct flexibility in the citizens of Berlin, and ON/OFF’s “urban experiments” are more readily accepted by local authorities, police, and passerby in this fertile testing ground. The success of ‘Kopf Kino’ in Berlin led to its tour around Europe, after having also been presented in the ‘Adhocracy’ exhibition at the 2012 Istanbul Design Biennial. Each iteration of ‘Kopf Kino’ breathes a new life with a changing palette of participants and edifices. The revolutionary space created by the collective lies not in the structures they create, but rather in the way their structures help viewers reimagine their bodies and the everyday space around them. The physical nature of ON/OFF, in the construction and operation of their projects, is crucial to the success of the collective’s initiatives. 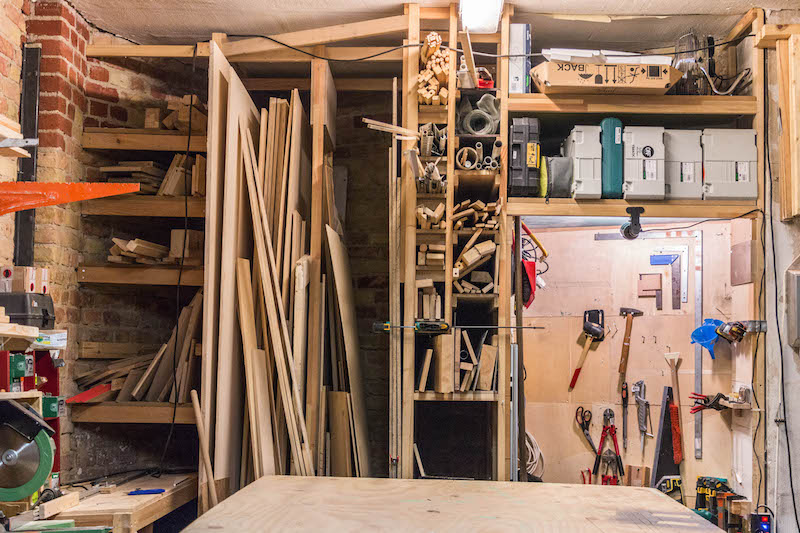 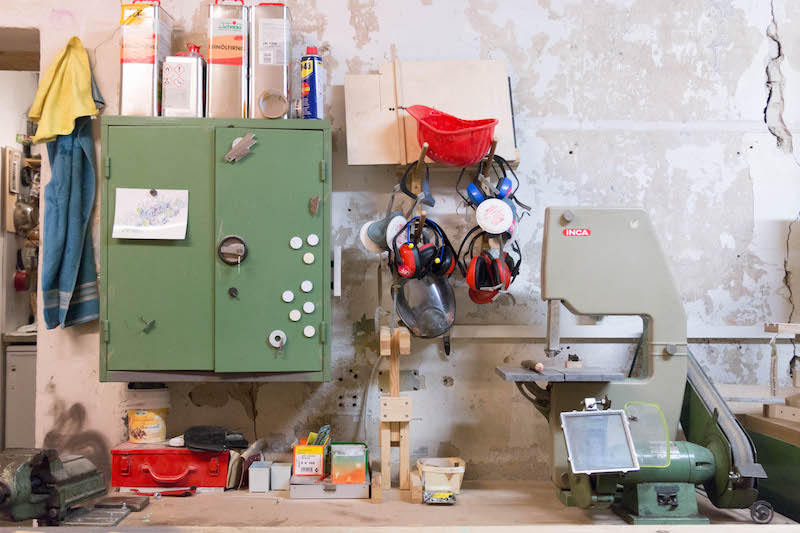 ON/OFF marries this physicality with a distinguished vivacity and humor in their projects. ‘BOULEvard,’ their response to the 2014 Kanal Playground festival in Brussels, encapsulates this play. A mobile playground made out of large plastic tubing and rope tension that rolls through the city streets, the structure creates an interior space for children and adults alike to exist in and translocate. The playground can squeeze through busy spaces, furthermore creating thresholds and barricades in the public space around it. If a family of ducks can incite the traffic of curiosity, imagine the disruption created by a family rolling around through the city in their playground. The unregulated trajectory of the users forms new paths of mobility in the landscape of the city. ON/OFF refutes the stagnant locality of the playground and turns the neighborhood itself into a site for play: ‘BOULEvard’ is as much a tool to re-envision as to move. 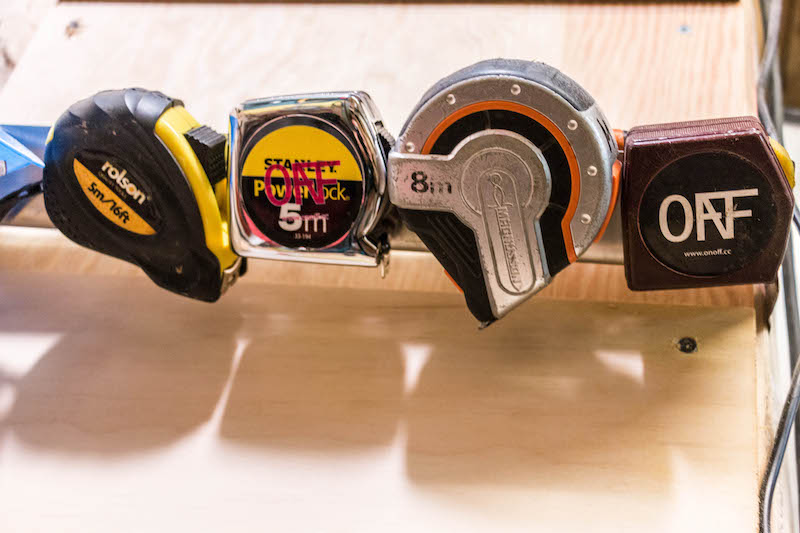 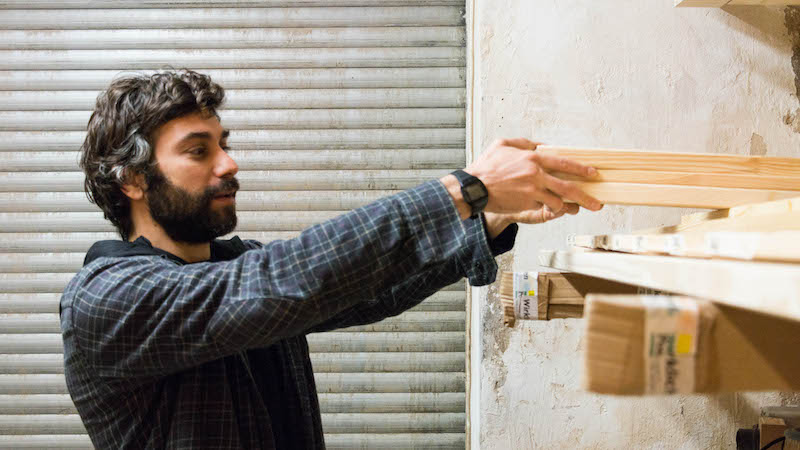 ON/OFF’s current focus is ‘Co-Machines: A Book of Mobile Disruptive Architecture’. This 200+ page book gathers 50 public interventions that manifest themselves as urban machines from submissions by emerging artists and designers worldwide. The project, now two years in the making, proposes both “parasitic or symbiotic” structures in the urban systems of space and economy. ON/OFF assesses mobile urban projects as a world-wide movement, the ‘co’ in the title denoting ‘common’, ‘collaborative’, and ‘collective’, among other words. The illustrative design of the book is as engaging as the content within it. Printed with a Risograph printer, which Asal notes is rarely found today except in church basements still doing their weekly pamphlets 80s-style, the ink on the pages has a tactility that almost feels screen-printed. The book, replete with comics, maps, schematics, and theory will be printed in the ON/OFF design-built ‘Guerilla Printing Press.’ 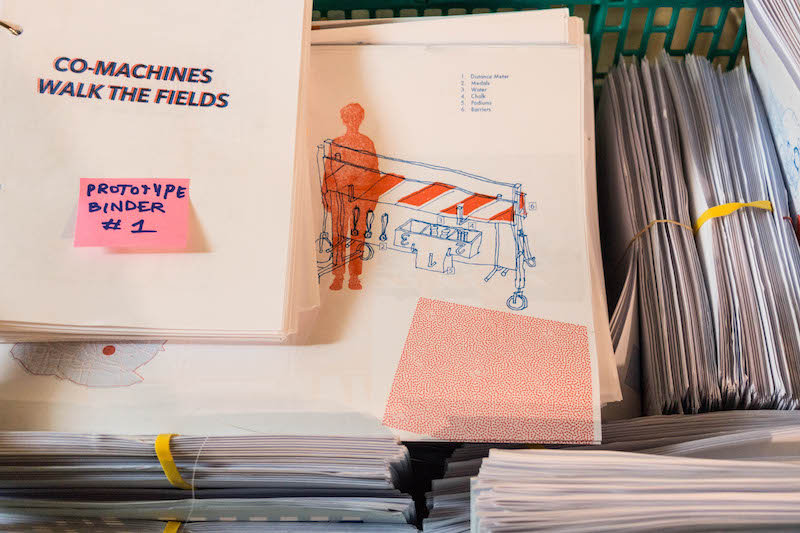 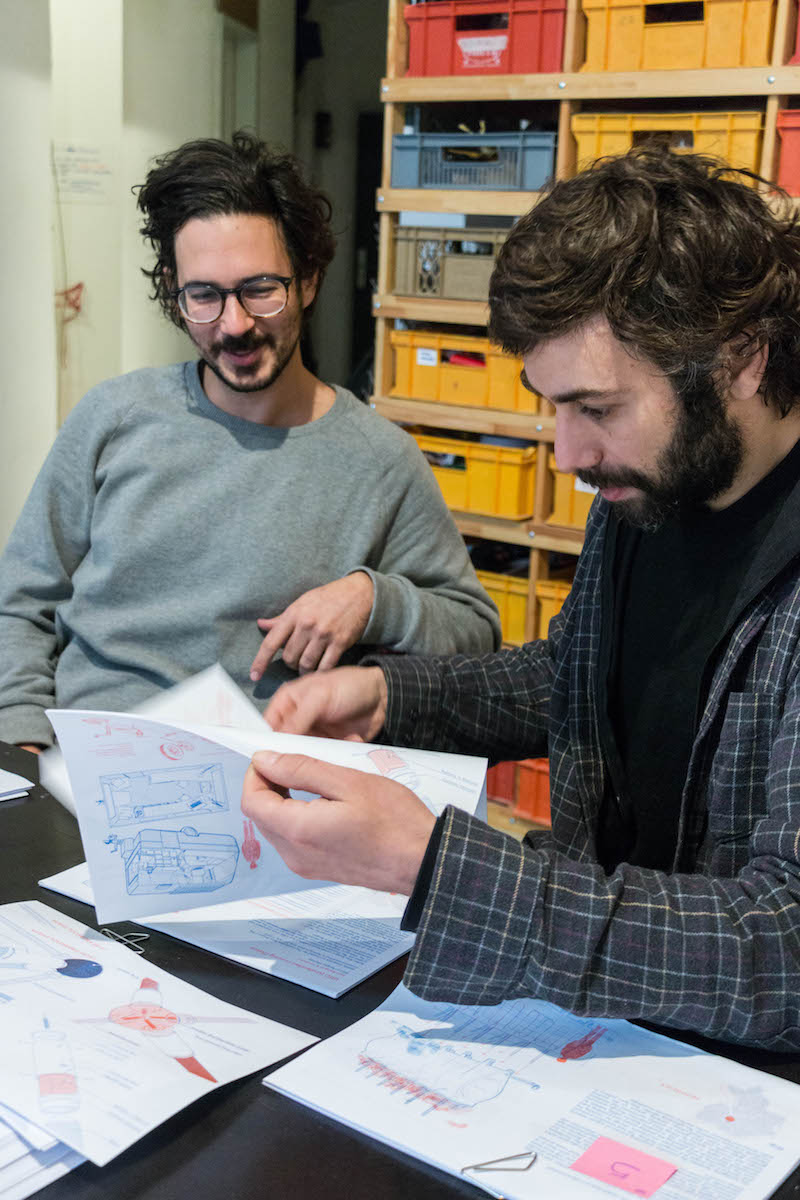 To fund this project, ON/OFF is yet again engaging with the public through their Kickstarter campaign. Until November 25th, participants have the chance to donate to the project at various levels in exchange for posters, editions of the book, or even their very own ‘Guerilla Printing Press’ (in case you want to start printing books yourself). The hope is to offset the labor-intensive design and fabrication of the project with crowdfunded capital, encouraging an intentional, community-based economy. In accordance with their mission at large—to hack public space and stir up conversations with and between citizens—the book compiles ON/OFF’s research into reshaping our civic existence through physical interaction and conversation.