Architect Anne Hodges was commissioned by British-Jamaican investor (and Bob Marley producer) Chris Blackwell to study the traditional architecture and village life of Jamaica and incorporate it in to the design for the commissioned ‘Island Village’ complex, a shopping centre with entertainment facilities in the city of Ocho Rios on Jamaica’s north coast. Today, Island Village’s purpose is playing host to cruise ship tourists. It’s housed in buildings that display structures representative of traditional Jamaican architecture, their appearance builds on the intention of enabling an authentic experience. Yet, they end up intervening in everyday tourism with architectural history and producing national identity politics as a marketing stratgey. After discovering her text ‘Multi-Terrained: Meaning and Memory in Island Village, Ocho Rios’, the artist and curatorial duo Philipp Rühr and Henning Fehr met with author Elizabeth Pigou-Dennis, professor for architectural history and theory in Jamaica, and filmed the conversations the three had throughout their tour of ‘Island Village’. Six months later, they met once again to visit Museumsdorf Düppel in Berlin and the Groß Raaden Archaeological Open Air Museum near Rostock. Their findings amalgamated into the work ‘Empty Village’ that was showcased as part of the exhibition ‘Being Sad is Not a Hobby’ in Bremen earlier this year.

‘Being Sad is not a Hobby’ probes questions surrounding colonisation, de-colonisation, re-historicisation, and the paradoxical nature of remembering and forgetting, through their exploration of dynamics in the historical sites they visit. Berlin Art Link spoke to Philipp Rühr to unpack the conceptual framework behind this project.

Kimberly Budd: How was the exhibition ‘Being Sad is Not a Hobby’ first conceptualized? Why did you choose to compare sites in Jamaica and Germany?

Philipp Rühr: While working on our video ‘Studio Visit’, we came across an essay by Elizabeth Pigous-Dennis, who teaches at the Technical University in Kingston, Jamaica. Her writing on the tourist resort ‘Island Village’ on Jamaica’s northern coast talks about how memory can be integrated into architecture, about traditional vernacular building techniques in the Caribbean and to some extent also about the branding of a country. After reading the essay, both Henning and I wanted to meet Elizabeth in person and do an interview with her. We valued the little bit of time we got to spend together in Kingston and wanted to engage more thoroughly in a conversation with her. The result was her visit to Berlin and our visits to some archeological sites in Brandenburg. We thought it would be interesting to hear Elizabeth’s opinion, not only about architecture in the Caribbean but also in other places.

The idea wasn’t to compare historical architecture in the Caribbean and Germany, but to learn more about Elizabeth’s perspective. If we had had more time, I would definitely have liked to make the film even more about Elizabeth and her way of engaging with architecture, theory, and real life. But you’re right. There is a comparative element in the film, and we chose the architectural sites in Germany very deliberately. We didn’t want to show Jamaican architecture, talking about its colonial and de-colonial background, and then show medieval architecture in Germany, pretending it didn’t have a colonial background. This is why we chose architectural sites which are very much related to land-grabbing and internal colonialism, on what is today German Territory. 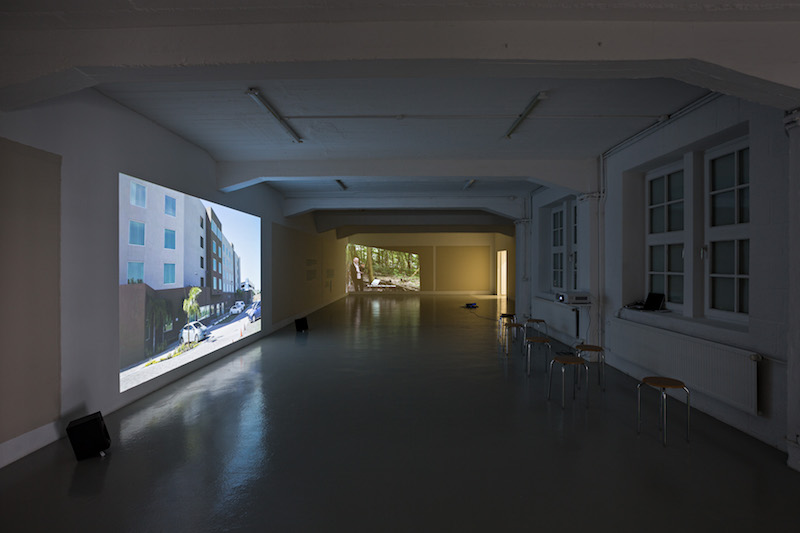 KB: In Elizabeth’s text, which accompanies the exhibition in Bremen, she states: “In terms of architectural history, Island Village is a late 20th-century fabrication of 19th-century Jamaican architectural vocabulary…in probing what it means it must be considered on the varied terrains that it occupies”. Can you explain these varying terrains and the history of this transformation over time? She also ties these issues in Ocho Rios with what Christine Boyle refers to as the ‘memory crises’ of post-modernism, can you also expand on this notion?

PR: I would really like to quote from Elizabeth’s essay here: “Island Village is, conceptually, a complex site with multidimensional qualities as a product of time, a commentary on time, an object in space, and the intersection of all these. It is ‘multi-terrained’ in that despite its obvious geographic existence in Ocho Rios and its clear role as a tourist attraction, indeed, it is somewhat uncanny on the level of meaning. It is a space of pure fantasy, which extends the world of the cruise ship into a fabrication of a traditional village setting. Not quite in ‘real’ Jamaica, nor literally on board the cruise ship, Island Village is, indeed, in no place. It is, in its reproduction of traditional Jamaican architectural vocabularies, with some details which are reminiscent of other Caribbean isles, something like a human scale model of historic structures. It is a theatrical prop, rather than authentic ruin – but a prop in which its creators sought to engage seriously with the precedents that inspired it. It is multi-terrained in that it occupies this curious zone between reality and fantasy, simultaneously there and not-there, compressing architectural details of the Caribbean into a single ‘village’ and mixing real architectural practice with theatre, freeze-framing the past in a simulation sited in the present.” 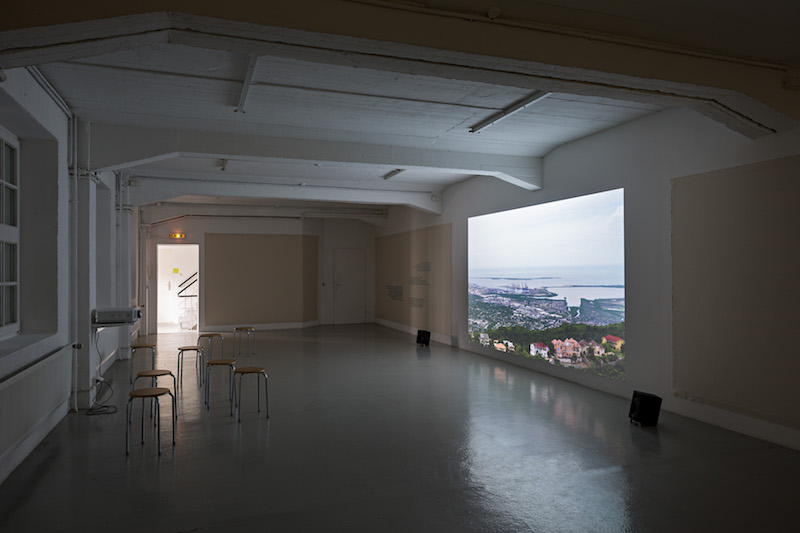 KB: This ‘exotic’, historical fantasy has become a global phenomenon, as it proves to be a successful marketing tool, there are many examples of this and ‘Island Village’ is a prime example of why this architectural intervention has become problematic to the traditional culture and Jamaican identity. What about the other sites you chose to compare in your video, “Empty Village’? What are the concerns or implications with identity at the German architectural-historical sites?

PR: The historical sites inside of Germany are medieval villages, where Slavic communities have lived. Until relatively recently, the narrative of the German majority has been that the Germanic peoples conquered the north-eastern areas of what is today Germany, and drove the Slavic peoples out. This narrative gained particular relevance in German nationalism and peaked in the 30s and 40s. From the 1970s on a sort of counter-narrative has been introduced, based on evidence that the Slavs and Germanic peoples actually have a very interwoven history, that they lived peacefully together in some areas and that what is perceived as “German culture” – whatever that is – is in fact in big parts Slavic heritage. The historic sites that we visited together with Elizabeth for the video shoot are part of this attempt to form a counter-narrative, of some sort of architectural identity politics. The Museumsdorf Düppel in Berlin is especially dedicated to asking questions rather than presenting historical facts. We know that the Slavic domination of the area came to an end when the Germanic peoples arrived, we know that in the late medieval ages the surrounding areas of the newly-founded Berlin had to pay taxes, and we know that the temple knights functioned as a kind of police force. Also, many German words and names are obviously Slavic, like Berlin, Kiez, Spree, etc. But many facts are entirely unknown and the attempts to construct a “Germany identity” are very questionable. In Düppel, a certain form of re-enactment is taking place: everyday activities from medieval times are acted out in the surrounding of the reconstructed village and people—amateurs and scientist—try to gain some knowledge by engaging in these activities. This approach does not try to conduct knowledge by scientific abstraction, but from work that includes the whole body.

KB: The counterpart to this exhibition was another video work, ‘Studio Visit’, that was part of the ‘Made in Germany’ series in Hamburg. For you the two video works are parallel to one another: can you elaborate on this previous project and why they are connected?

PR: ‘Studio Visit’ is dedicated to the Berlin-based Rhythm and Sound music project that happened mostly in the early 2000s. It is a collaboration between Mark Ernestus and Moritz von Oswald, who produced the beats, and many other musicians who sang on the recordings, and whom we knew hardly anything about. All these musicians, who have a background in Reggae, Dub, Soul, are portrayed with photos on the records, but we didn’t even know where they were based. We did some research and finally met with quite a few of them: Jah Batta, Love Joy, Skyee Barnes, Lloyd Barnes, Ras Menilek and Tyrone aka Studio Bug in their recording studio in the Bronx. It turned out that these musicians, similar to Mark and Moritz in Berlin, ran a well-known music label since the 70s themselves – Bullwackies. Initially, we thought that some of these musicians were still living in Jamaica, which is why we also decided to research and film there. It soon turned out, though, that most had moved to the States. We ended up meeting and hanging out with Elizabeth in Jamaica, when we had actually planned to work on the ‘Studio Visit’ video. ‘Empty Village’ developed out of ‘Studio Visit’ and was shot around the same time. Also, themes of cultural transmission and colonialism that tie back to Germany are equally a topic in both videos and their individual installations, although this is more clearly expressed in ‘Empty Village’.

KB: Has there been any resistance to this sanitization of living history over time, depicted within ‘Island Village’? Can you identify any interventional solutions to this continuation of colonization in architecture?

PR: To be honest, I have no idea. I have not heard of any resistance, nor has Elizabeth mentioned this. I think ‘Island Village’ is to some degree respected in Jamaica, as it is a project by the producer of Bob Marley, Chris Blackwell. Elizabeth talks about the site in a very ambivalent way. There aren’t many places in Jamaica where Caribbean architectural history is preserved. I think the essay is itself the answer to your question. Her somewhat positive reading of ‘Island Village’ allows the reader to imagine a better ‘Island Village’, a site that is devoted more to architectural memory than to the tourists. But the fact that what is already there led to her reflections on vernacular architecture is reason enough to assume that some things about ‘Island Village’ came out well.