The third edition of the 3HD Festival, titled ‘Whatever You Thought, Think Again’, drew upon 3HD’s previous years and continued in the promotion of Berlin’s tech-focused, post-internet avant-garde. In praise of digital democracy, the 3HD Festival’s political agenda is aesthetically embodied by their video-driven website, which exhibits its content with unpredictable and uninterruptible force. Apart from their online presence, this year’s festival included various performances, installations, panels, and workshops. It is within this frame that ‘Meditation on Music’, an evening of performances at the HAU2 featuring sound artists Green Music and Marta Forsberg, took place. 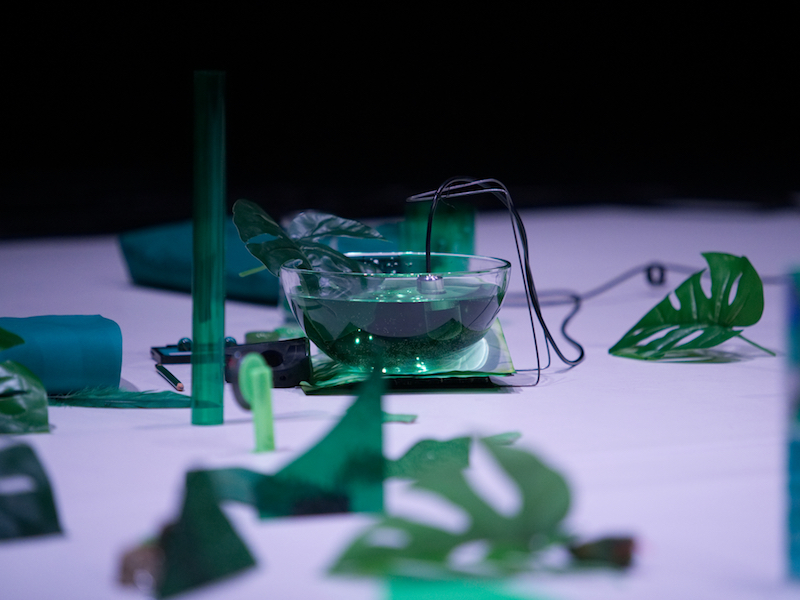 Green: the colour of verdant meadows and fresh, sprouting vegetation. Applied with abundant brush strokes in the luscious countryside scenes of landscape painting, the colour poses an idolised view of the peaceful coexistence of man and nature. In the internet age, this nostalgic longing for nature is also available, in abundance, online: a quick Google image search instantly provides us with infinite stock images of dew-dropped blades of grass framed against blurry, multi-shaded backdrops. From traditional painting techniques to saturation-boosting post-production in advertising, green is the colour that best represents our urbanised, cultural desire to be closer to nature.

With their green-swept installation and sound performance, Green Music by Francesco Cavaliere and Tomoko Sauvage embellished this nostalgia. Leaves, sticks, and bowls of green-tinted water were mixed with an array of small, plastic objects, synthetic dyes, and green synthesizers to create a multi-layered landscape that merged nature and artifice. Inspired by the work of Fluxus composer Henning Christiansen, the duo experimented with hydrophones that picked up the underwater sounds of liquid sloshing to a gentle pulse in clear containers. Like fish in a fish-bowl, Sauvage’s hands were magnified to larger-than-life proportions and Cavaliere waved shiny green textiles to hypnotising effect. The sound score they played was in this way transformed into a meditative, multi-sensory experience. 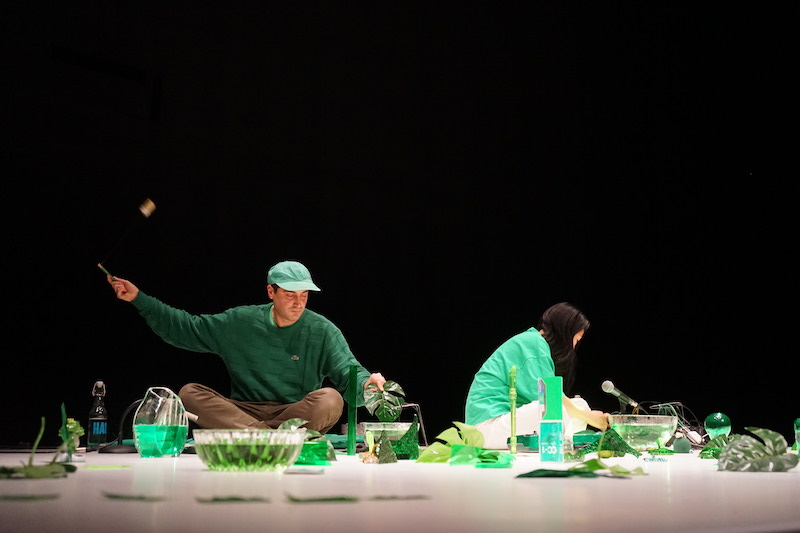 Marta Forsberg, within the same format of sound performance and installation, began her set in darkness, engendering a tranquil and sleepy atmosphere. Her sweeping arpeggios rang out from the speakers and filled the room in mesmerising vibrations. Each note was given the time it needed to rise and fall, allowing for a slow musical progression that intelligently translated the aural into the spatial. Four LED lighting strips, placed like an altar behind her, complimented her sliding frequencies with rhythmic precision, broken only by a half-way hiatus. Master of the long build-up, she gradually brought the piece to a climax. Never rushed, her performance was sharp and clear. 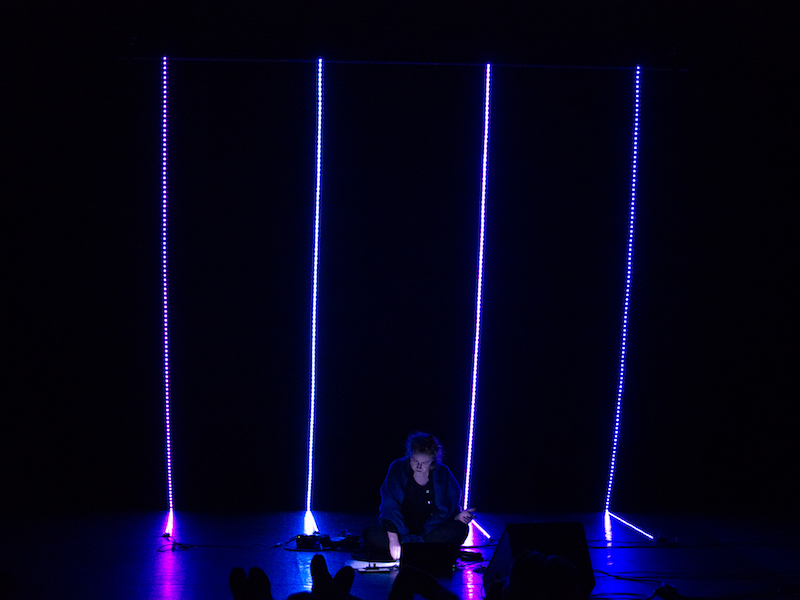 In both of the performances digital music technologies were used to create ambient environments of relaxation, rest, and meditation. Visual and aural stimuli induced altered mind states and made space for alternative methods of healing. ‘Meditation on Music’ acted as a necessary dose of calm within the hectic, high-energy profile of the 3HD festival programme. As a compliment to the festival’s experimental reaches, the performing artists showcased a type of digital art that does not need to indulge in post-internet eclecticism but instead found its clarity in a return to simplicity and grace.