“A show about edges” is the last remark—taken down in my oblong handwriting, noted during my walk through Future Gallery’s current exhibition. Material and metaphysical bounds are traced and often smudged here: a line one can draw through all of the works is the negotiation between physical and digital being. The large majority of artworks are objects, and all of the works’ production involved the use of a machine. So along with the first negotiation, there was a broader question hanging in the room: where does the creative agency we associate with human consciousness meet the automated mechanism? Are we not to grant the 3D printers, table saws, and Adobe programs responsible for the material existence of these works their due credit as collaborators? 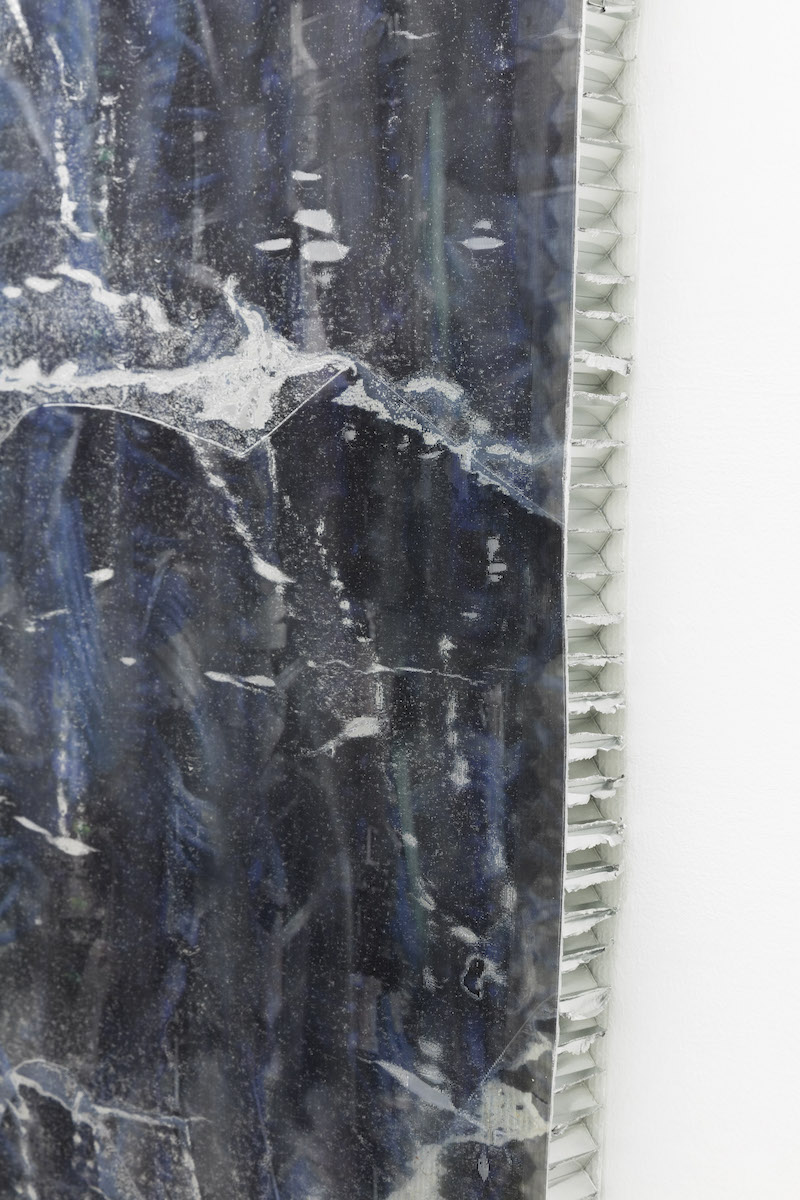 In an exhibition of paintings or drawings, the gestural kinetics of “a human hand” can often seem to stir the air; the room vibrates with strokes. Though this particular sensation isn’t tangible in ‘Hard to explain…’, there also isn’t a clean stillness. Estrid Lutz and Emile Mold’s two lenticular collages shift and graft fractured images and digital patterning as one walks by. Both are rectangular, the shape we expect of canvases, but roughly: the corners are jagged, the boundaries asymmetrical. The aluminum honeycomb panels on which the collages are mounted look so acutely sharp because they’re planed unevenly. In another room, a head sits on a plinth in the Classical style – Julieta Aranda’s ‘A fanciful strategy? I might have known better…’ The top half of the shined, chrome-blue skull seems to be missing though, with a pink foam prism sitting inside the cavern. One notices that the cranial pink merely continues the contours of the face, hair swept back, and below, the metal edges look rough-cut, almost torn. 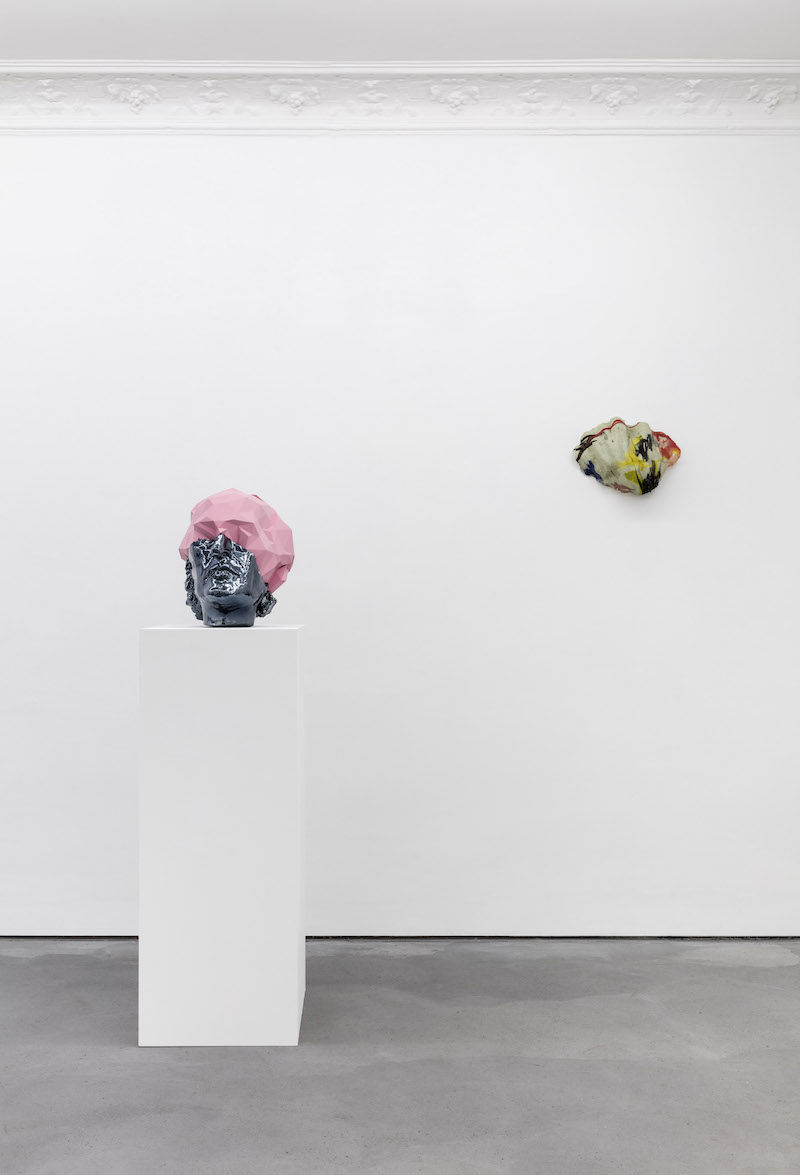 The physical gradations of Lutz/Mold’s and Aranda’s pieces are sharp and blocky, willingly “flawed”, though all were produced with digital printing: a technology whose progress is measured in degree of precision, definition. In setting its capability for clean edges aside, the printers’ hand gained a new presence. What could be biometric was bionic, and if not intelligence, there was an artificial agency in the artworks. Pakui Hardware (which sounds like the name of a fictional agency) presented three sculptures, reflective and amorphous plaques or bacterial cultures. The heat-treated plastic warped with fungal blues; pinks, mixed into the polymer were sea-urchin spines or soil. The standard metal tripod on which one was mounted became bodily. So rather than riding the edge of Masahiro Mori‘s “uncanny valley” (the observation of a steep decline in human empathy towards robots that appear just a little too lifelike, rather than some kind of Gundam), many of the works in ‘Hard to explain…’ gestured towards the divide between automaton and AI. This edge, decidedly, is not so clean.

‘Hard to explain…’ feels truly bionic though, like a respectful pact between the human consciousness and the technological agency, when one delves deeper into the source material and physical processes that rendered these artworks. The birth of the Pakui blobs began with aerial NASA photographs of surfaces in outer space; the artist duo of Neringa Cerniauskaite and Ugnius Gelguda then molded heated plastic into physical models of these immaterial nebulae. In a way, it sounds like a 3D printer carrying out a set of digital instructions to produce a replica of a human body, though the subject and object of such an act have been reversed. Aranda’s head resulted from a 3D-scanned bust from a museum in Genoa, which the artist then digitally edited into a new form. In doing so, she mediates a translation process from the original model’s head to the Classical bust, from the Classical bust to data in which a digital interface is fluent, and from that data back into the realm of the material stroke.

Most quiet of the artworks in this exhibition are Aude Pariset’s three ‘FX Tridacna’: three multi-colored, clam-shaped sculptures, each about the size of a soup bowl, fixed on the wall. Pariset sourced digital paintings from a now-defunct Tumblr called Paint FX, printed them on rice paper, and molded them onto a mesh frame; duly, they are described as “reanimations”. I would never have access to these paintings if not for the sculptures, but if I ever saw them as a digital form, I most likely would’ve scrolled right on by. Bound to the delicate texture of the rice paper, and adopting the curves of the shell, they became luminous—still resistant to an easy visual register like Lutz and Mold’s collages, but inviting nonetheless. Again, the paper’s edges are cut with a minute fray. As a symbolic token, the clam’s value seems to derive entirely from its internal contents: the pink flesh inside a grey-blue case, brain-like; the pearl; Botticelli’s ‘Venus’ standing in its little bowl. Let’s remember the hardware though: bivalved, an emblem of marriage, of edges meeting at a necessary hinge.