It doesn’t matter that Pakui Hardware’s studio is small, because there is almost nothing in it. This is not out of inactivity, but the opposite. ‘On Demand’ was the title of their first Berlin exhibition with EXILE Gallery this summer, but in fact the Lithuanian duo is very much in demand: between Helsinki, Budapest, Sao Paolo, Freiburg and Berlin, everything is simply away on show. I am lucky to even find them here. 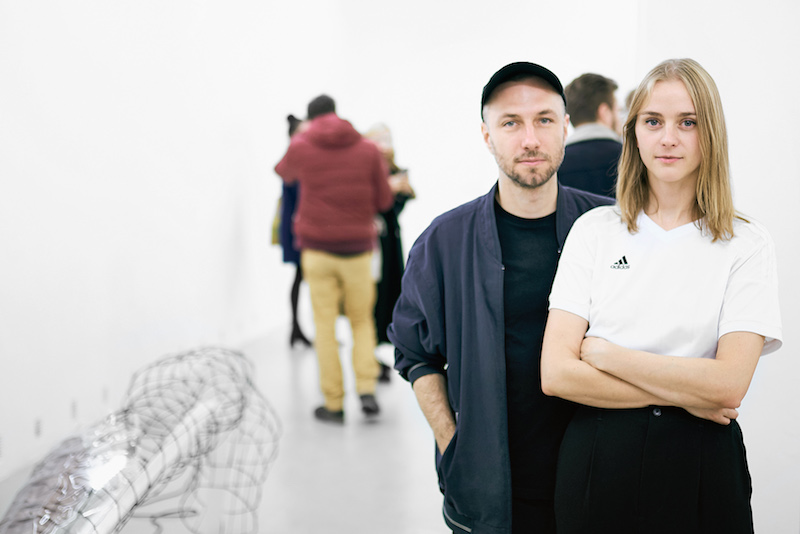 Neringa Cerniauskaite and Ugnius Gelguda relocated from Vilnius to Berlin earlier this year but, like their work, haven’t spent much time in the studio. We are in a Hinterhof in Alt-Treptow. There’s a shopping centre nearby where you might go if you’re caught in the rain and having one of those days. A number of other artists, such as Anna Uddenberg and Richard Frater, also have their studios in the one-story building. ‘It’s a nice place,’ I remark, ‘Very Berlin.’ This is real estate language for: pretty barebones, but isn’t that the point?

Ugnius and Neringa have worked together as Pakui Hardware since 2014. Whenever I’ve seen them they’ve both been dressed in black. Like Carl Andre always sports the workers’ overalls, this is the artist’s uniform for the digital age: stretchy cotton, sneakers, a cap. The advantage of this outfit over Andre’s is that it allows a seamless transition from day to evening-wear. 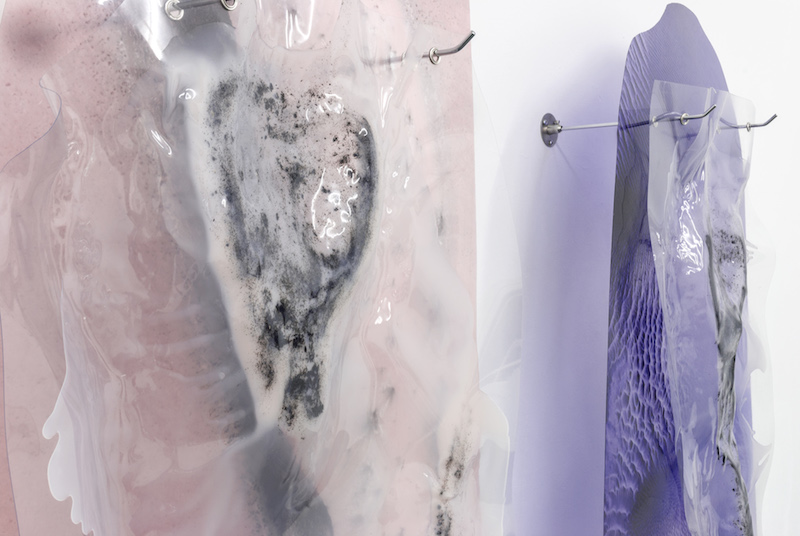 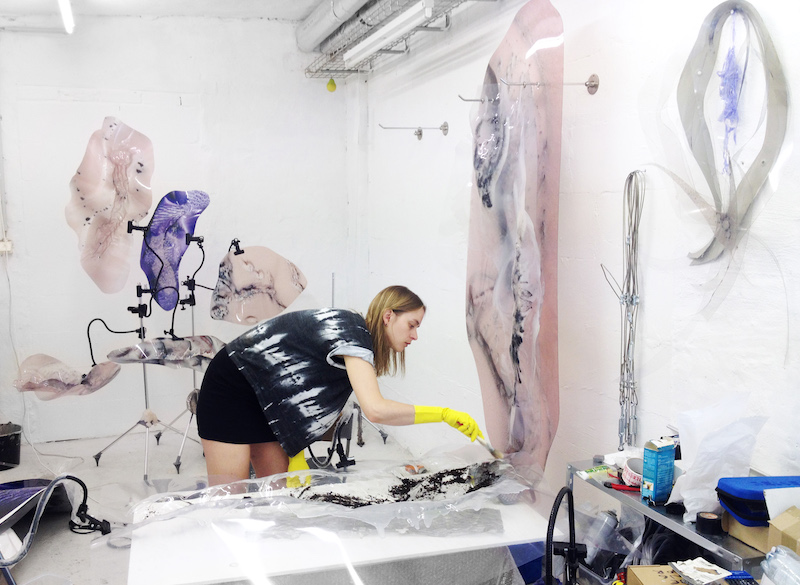 Neringa does most of the talking, perhaps because they’ve decided between them that it’s more efficient that way. When they’re alone and working, I learn, they barely have to speak at all: a creative exchange between ‘Maybe we should?’ and ‘Yeah, let’s do it’ yields a prolific output. As Pakui Hardware, the couple are like a single organism constructing and deconstructing strange, melancholy creatures all over the world.

Their work arises out of a series of oppositional pairs: synthetic-organic, science-nature, digital-real, body-landscape. On the one hand, these are all false binaries, but on the other, some aspect of their difference remains, nevertheless, impossible to bridge. A few of the works from the ‘On Demand’ (2017) series are currently part of a group show at Future Gallery that we visit together. ‘No. VII’ is a shiny plate of pork-coloured plastic the height of a tall man suspended on the wall. Neringa likens it to a slab of meat dangling from slaughterhouse hooks, yet it is also incredibly clean, like something you’d find in a laboratory. This is the point of untranslatability between, say, science or technology and what we might call lived experience, and the point of frustration for which the work attempts to compensate. 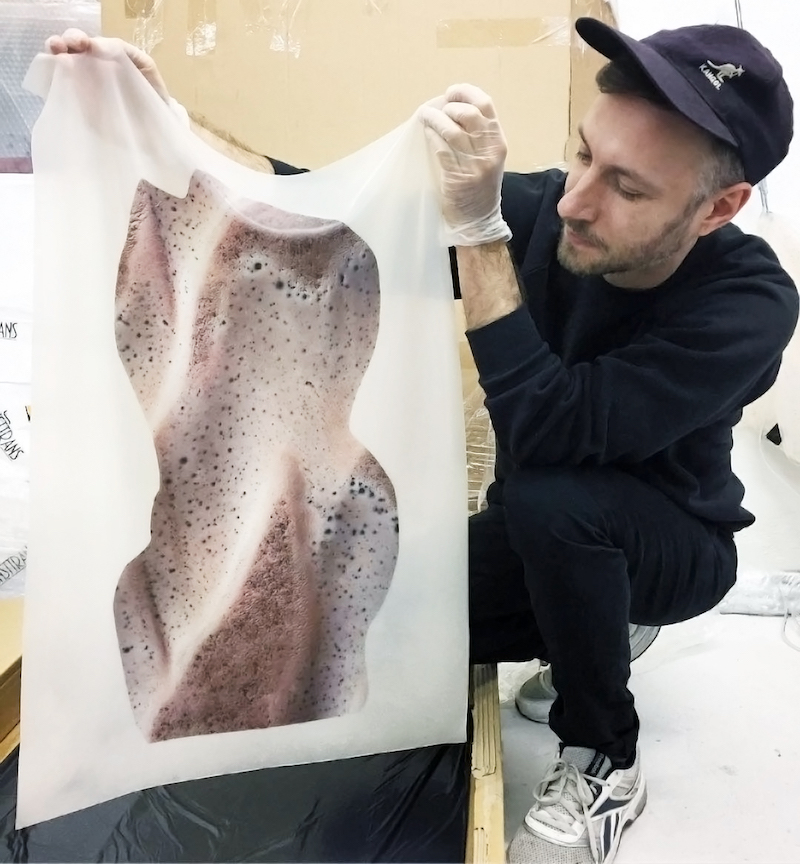 I’ll explain. The base of ‘On Demand No. VII’ is a photograph of the surface of Mars. The duo spends hours searching NASA’s archive for an image that is remotely relatable, that looks like anything at all. Your finger becomes numb from scrolling, Ugnius admits, but even then, the image stays flat. An impression of Neringa’s body, on heat-treated plastic, hovers over the photograph like a miniature mountain landscape. Some soil has been added to the inside, again, in an attempt to add some life to the still surface. One of the floor sculptures in the series also features chia seeds and sea urchin spines. Suddenly not like a laboratory at all, their project is always this: teasing humanity out of nature, undermining artificiality.

At the studio, some works have just returned from the Freiburg Kunstverein. Another photograph from Mars printed on a silky sheet of silicone – an incredible texture, like the skin of a jellyfish – which, in the show, was fastened to a small plastic crate. In Freiburg, the crate sat on photography backdrop paper like a prop on a stage. Earlier this year at the National Gallery in Vilnius, it was arranged into different picturesque constellations, with others of its kind, by a large robotic arm. This impressive installation, titled ‘Hesitant Hand’ (2017), Neringa says, is basically an attempt to see human qualities, such as hesitance, in automatic procedures. Thinking on my feet, I coin the term “accidental affect” – quite good, no? 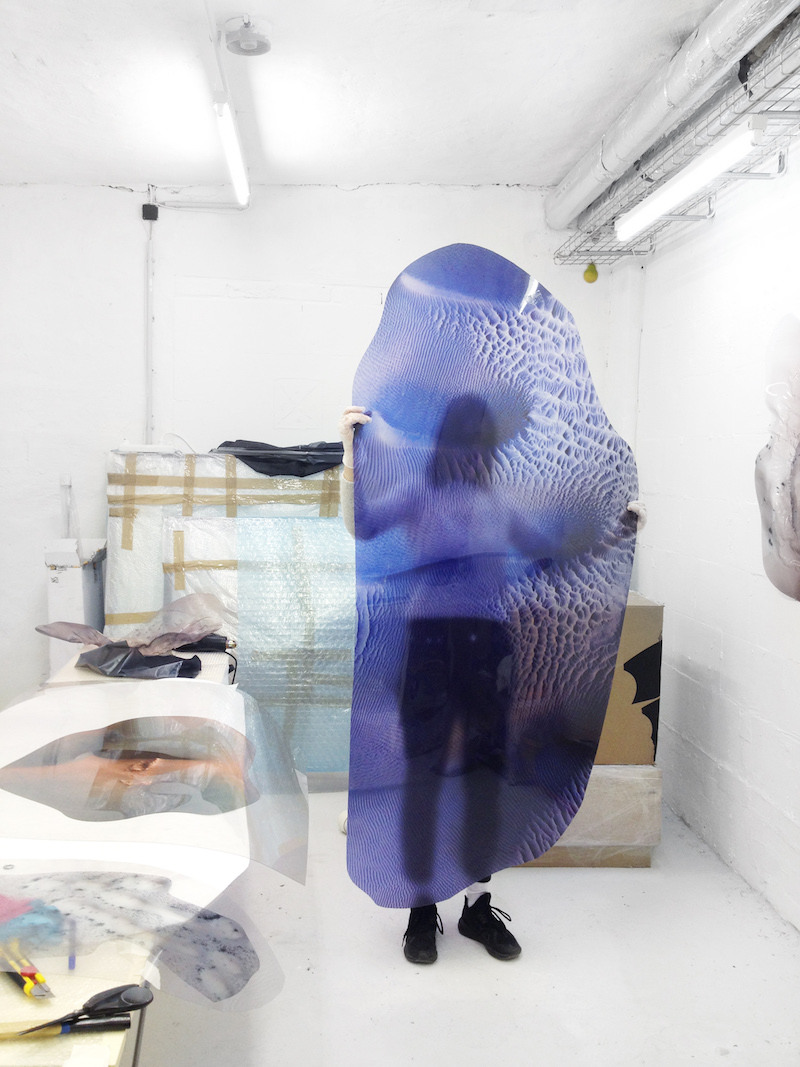 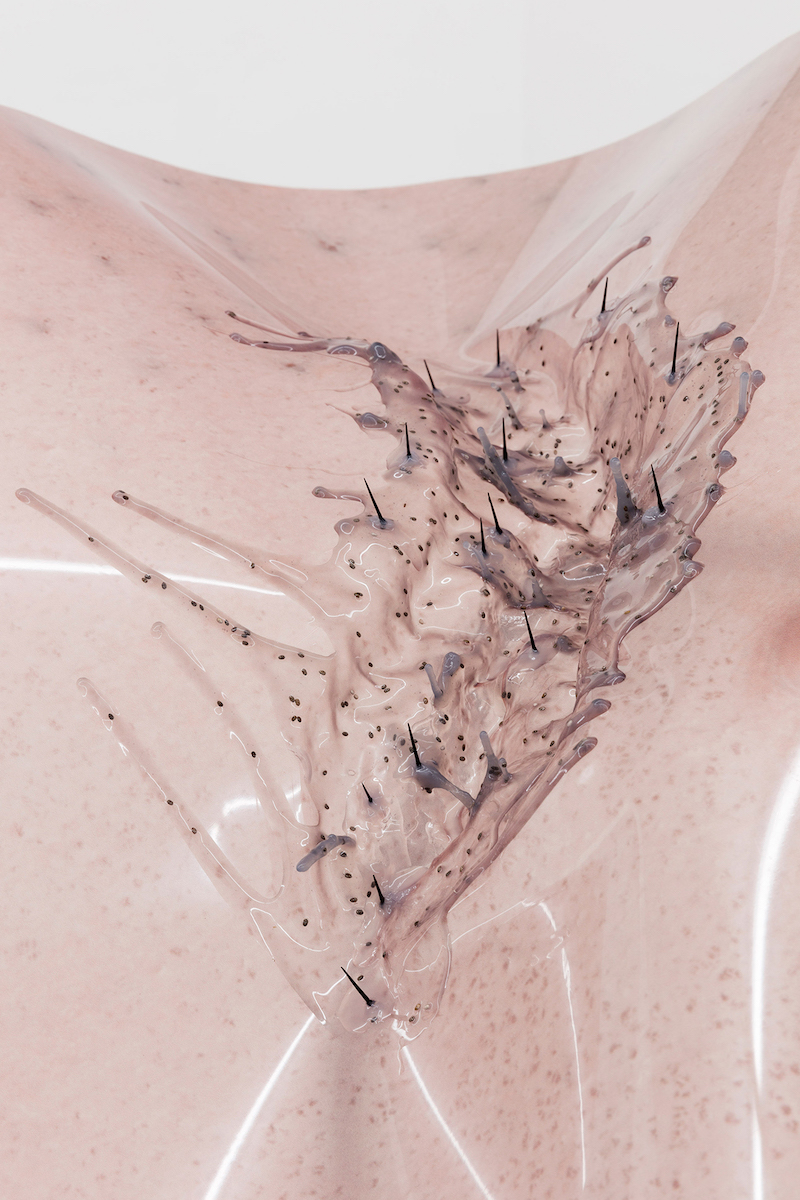 Already in Aristotle’s writing, Neringa continues, automation is understood as both technological and contingent, that is, a kind of spontaneous network of reactions. The question is: can machines be spontaneous? ‘Hesitant Hand’ carefully, yet inadvertently (we suppose), composes shifting impromptu art works. But isn’t creativity always, at least somewhat, unwitting? According to Jacques Derrida, Neringa relates, her face breaking into a smile, the only thing that is both automatic and spontaneous is the penile erection. Thank you, Derrida.

Technology, then, on both sides, is characterised by lack: a perceived absence of consciousness in machines, and the compensation for vulnerability and volatility in us. To Pakui Hardware, what this means is that the relation between humans and non-humans is defined by a reciprocal need for care. Made for an exhibition at Helsinki’s SIC in August, now travelled to Trafó Gallery in Budapest, ‘Creatures of Habit’ are a pack of large, amorphous steel structures partly dressed in sturdy outerwear. Inspiration for the series came from the very real phenomenon of robotic clothing, used to protect agents such as that used in ‘Hesitant Hand’ from weather, or dust, or each other. The sculptures are first made as little architectural models, then 3D-scanned and transformed into a grid by which the final iron shape is welded. On the inside are suggestions for organs and lights, adding life to the bodies through nearby power stations. 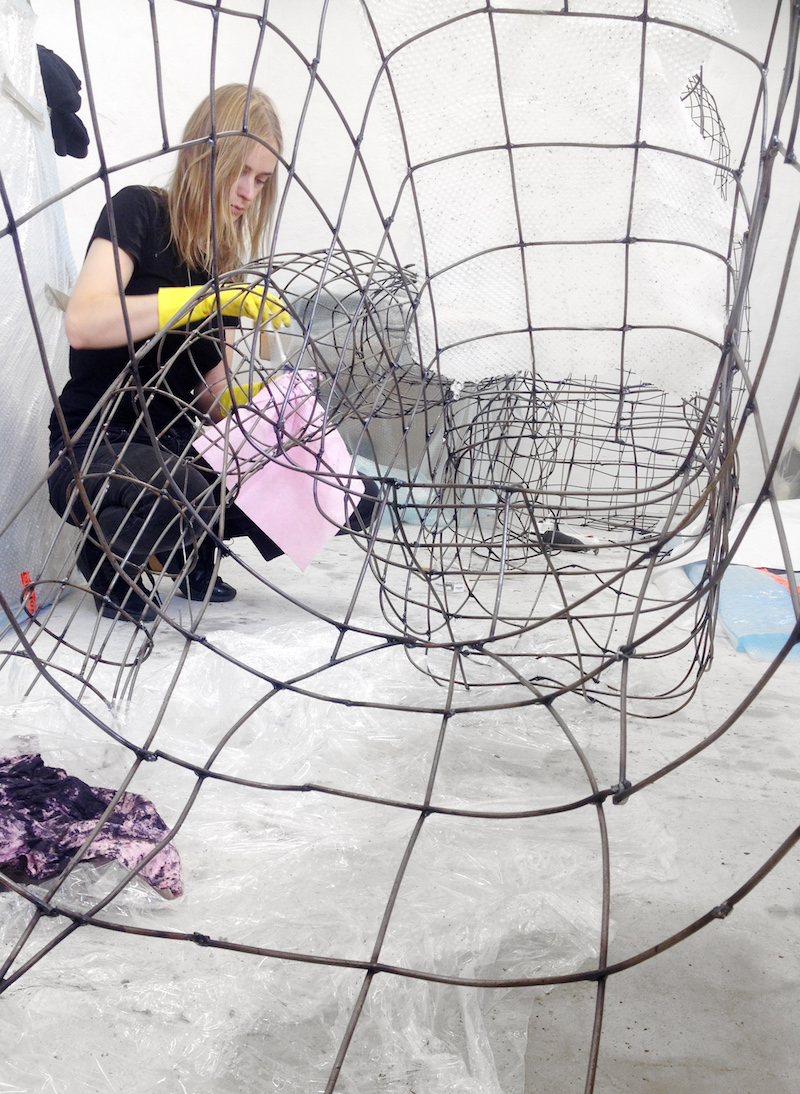 My instinct is to respond as one would to a small dog in a raincoat: how cute! But, as always with Pakui Hardware, this is beside the point. The organs are spinning, the lights flickering. Like Ugnius and Neringa in their black uniforms, the habit of these creatures is work. Here, clothing is an avenue for identification that paves the way for solidarity between workers, and expands our understanding of labour and production to include the non- and post-human. Considering that I’ve visited an empty studio, this is quite a lot to learn.

Group Show: ‘Hard to explain (the promise that was never made, reality that had to be imagined)’
Exhibition: Nov. 4–Dec. 9, 2017
futuregallery.org
Schöneberger Ufer 59, 10785 Berlin, click here for map