‘Evidentiary Realism’ at Nome uncovers a new wave of realism, one that divulges the underbelly of evidence from larger social systems. The exhibition is curated by Paolo Cirio—an artist who explores legality and semiotics in relation to the information economy—and spans drawing, painting, collage, and new media. With layered aesthetics and a conceptual framework that questions veracity, authorship, and legality, ‘Evidentiary Realism’ uncovers encoded language and redefines documentation, as not a record of reality but as a barrier between information and the truth.

Though by no means comprehensive, the exhibition does trace the historical roots of contemporary trends, citing Hans Haacke and Mark Lombardi as forebearers of the development. Hans Haacke’s ‘Comparison of 3 Art Exhibition Visitors’ Profiles’ posits the data from three polls conducted in German art exhibitions between 1972–73 as sociological evidence. By asking visitors about demographics (such as profession, education, and art world relation) in addition to politics (such as abortion, role of the church, and immigration) his ten silkscreen prints derive their subjectivity from the audience and visualize the invisible positions of viewers in a systemic consideration of the art world. While Haacke presents data, Lombardi traces information, the networks of knowledge. Lombardi’s ‘George W. Bush, Harken Energy, and Jackson Stephens, c. 1979–91, 4th version’ tracks socio-political and economic transactions by world leaders and tycoons. The hand-drawn diagram has an investigative quality that depicts systemic scandals and attempts to decode highly complex political situations. This diagrammatic approach to revealing networks echoes many contemporary works, such as Walid Raad’s ‘Walkthrough’, in which the artist attempts to diagram artists’ funding and the political transactions of the Arab art world. 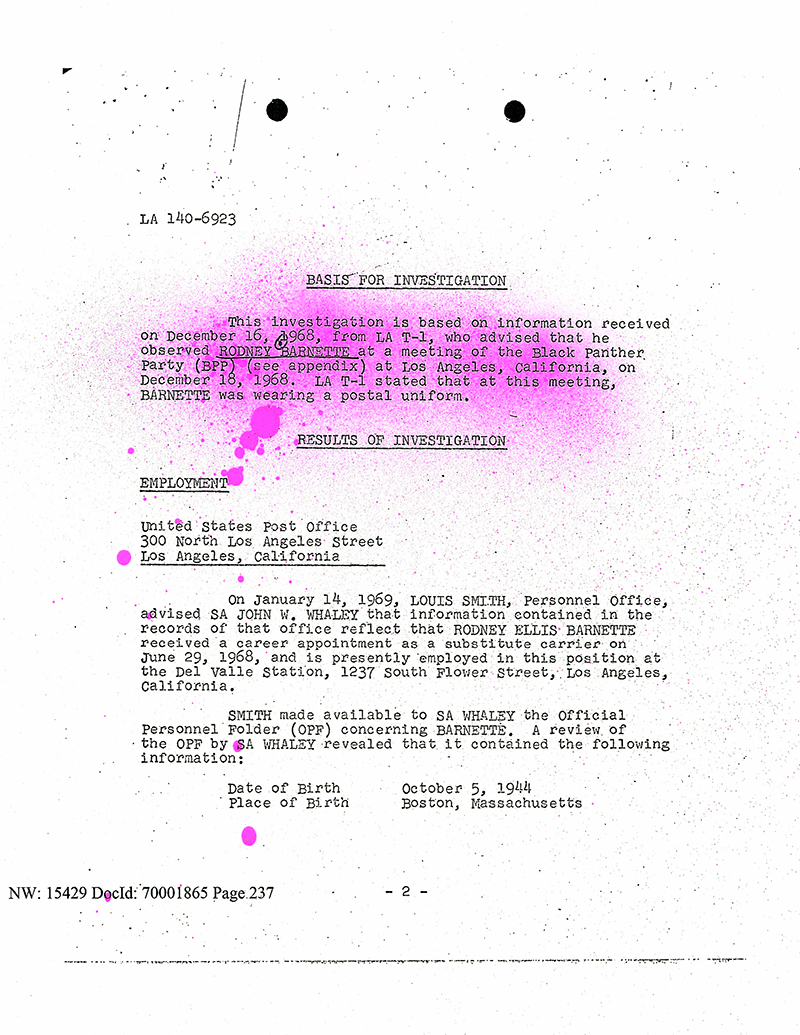 ‘Evidentiary Realism’ urges the gaze to confront what is immediately present, adding a new plane to our ways of seeing that is contextually macroscopic. The primary role of artists in the exhibition is neither to create nor to interpret, but rather to challenge. Sadie Barnette and Jenny Holzer reproduce and notate classified documents to obscure and enlighten certain details. For Holzer, ‘The White House 2002 Green White’ revives a technocratic document of a secret memorandum signed by President George W. Bush that legitimized the use of torture on prisoners of war seized after 9/11, only made visible to the public after the ‘Freedom of Information Act’ (FOIA) requests by the American Civil Liberties Union (ACLU). Its hand-painted nature makes the bureaucratic means of war more raw. Sadie Barnett’s ‘My Father’s FBI File, Project 4’ alternatively personalizes the documents calling for the surveillance of Rodney Barnette, founder of the Black Panther Party for Self-Defense in Compton, and the artist’s father. She deconstructs false narratives of the political conflict between the Black Panthers and the FBI with intimate memories rectified in pink paint, a Janus-faced portrait of her familial relationship and the political narrative of the time.

Though the curator argues ‘Evidentiary Realism’ is not a political show, the examinations and revisions in each of the works have a potent political dimension. The works highlight the investigative role of the artist not as journalist, but as informant, publisher, and contender to legality and the state. Conceived post-9/11 but before the wave of post-truth in which we live today, the ideas find a new life in our current era of disseminating and discerning information. As the documentary fades into the forensic, there appears to be no unifying evidentiary aesthetic, but rather a collective conceptual investigation into linguistic, legal, and socio-political systems of communication. The artists are not objective, and neither is the information, but by exposing the subjectivity of reality, they try to promote a more informed analysis thereof. By distinguishing data from information, separating raw material from understood knowledge, and underscoring context over content, the exhibition identifies a significant trend in contemporary practices and engenders a more critical lens of communication systems in our world today.