I first attended ‘Altbau,’ an installation by Alvaro Urbano currently on view at ChertLüdde, because of a violet hue in a photo selected for the vernissage’s Facebook event. The work could’ve been a print or a painting, it kind of hovered and was unreadable, but I was also staring into a screen. That dusk was worth seeing though, that violet.

The courtyard was dense, and I didn’t really recognize anyone yet kind of recognized everyone at the opening. Twlight. I went with a friend; our noses running from eating ramen. I entered the gallery looking for prints, something edged and 2D that I could press my face into, and that violet. In the basement, there was some yellow lighting panel on the wall, dim glow; people standing and chatting. Up ChertLüdde’s metal ladder with its shallow steps to the main level, and suddenly at eye level with the violently neutral grey-blue weave of a carpet, fluorescent lighting, some papers and three cardboard boxes laying around: an office. 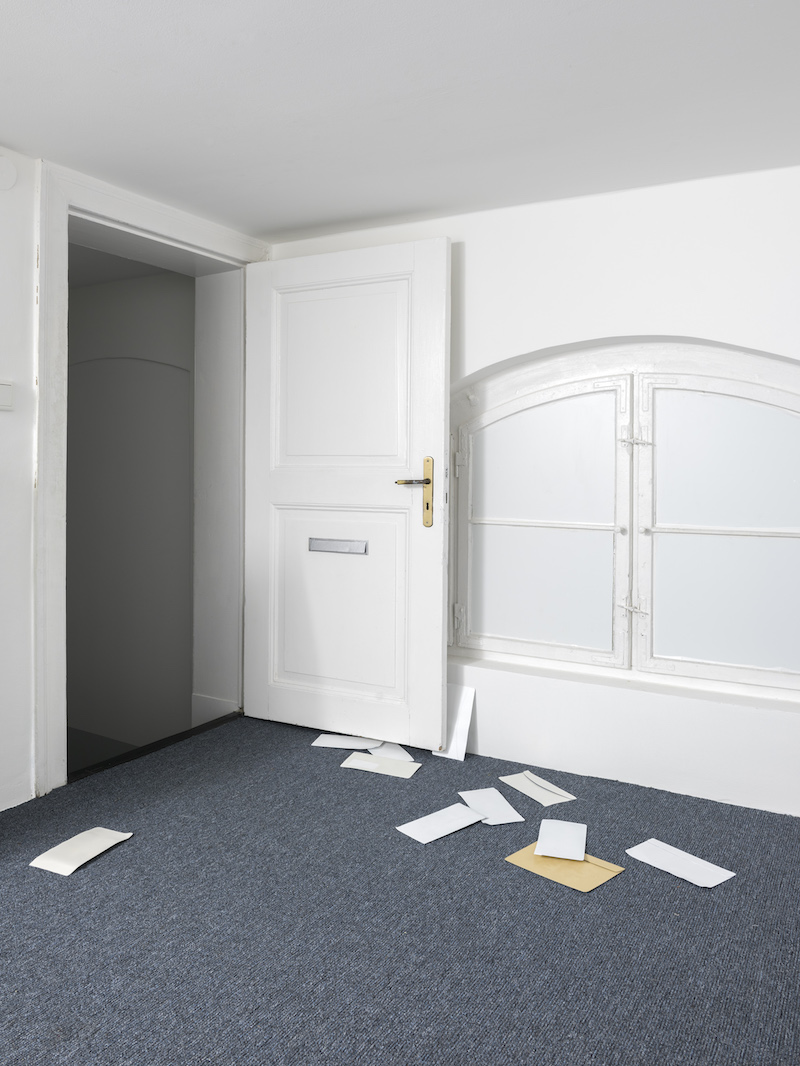 Still looking for that violet. Down the corridor and up a short flight of metal stairs to another office. It was windowless, fluorescent lit, and contained some envelopes on that same carpet weave. A small print hung on the wall, but no violet; this was a semi-abstract landscape, typified green and blue, off-putting. The ceiling was too low, we crunched our necks a bit. People walking in and out.

The people in the gallery weren’t signaling any way to engage with Urbano’s work. Maybe they were confused; maybe I couldn’t read them because of the installation itself. The spaces were generic and recognizable, but there was a feasible tilt to reality, something that slid it. My friend knew the artist and they chatted for a moment; I don’t know when or what was said, but I came to understand that Alvaro fabricated all the objects in the gallery. Brief touch to a creased box on the carpet tells me its metal—dull to the finger, cold weight. Fake walls, ceilings. The metal heating grates were spongy, cardboard. So no violet, but a twilight undoubtedly. We left shortly thereafter, unnerved, crushing.

The second visit to ‘Altbau’ came without question. I like going to art exhibitions alone because I find it optimal for reading the work. Urbano’s installation, in its very form, seemed to demand an engagement that was perhaps not defined by solitude, but was a solitary experience. Emotion is a marginal currency in these galleries. ‘Office,’ ‘Corridor,’ ‘Room,’ and ‘Backalley’ don’t move me as much as they make me unsure of my placement. The fiction swells and recedes; its contour was more ornate and tangible this time because I also prefer to write alone. 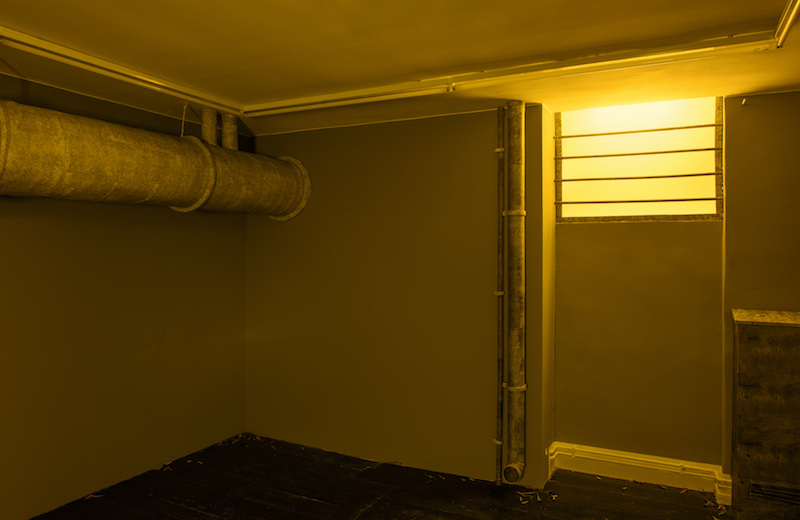 The disquiet is pleasurable somehow, shades into you standing in these incredibly boring but also wavering rooms. Their reality rests on twilight, quicksand; I react with a steady impulse to fill, in some way, the plot holes: Why the densely scattered envelopes around the entry of ‘Office’, as if blown under the door like leaves? This kind of questioning finds no purchase. The hard envelopes and cardboard boxes are without address or logos. The floor of ‘Corridor’ is pristine, however, and Urbano’s environments have no windows to the courtyard or street—an optimal architecture to let in fiction, drafting. Pristine except for a seemingly paper (but actually metal) coffee cup placed by a doorframe, its content is amber and doesn’t ripple when I blow.

Urbano has been troubling the notion of what constitutes an environment in recent years, probing it with fiction. On the other side of a sledgehammered hole in a gallery wall, for example, lies the dense greenery of a forest floor. For the Festival of Future Nows at the Hamburger Bahnhof, he made replicas of the museum doors; leggy and mobile, they denied or granted visitors entry. And the basement of ‘Altbau’ holds an ‘external scene’ indoors, with a drainpipe curving into the center of the room, metal leaves and cigarette butts flicked about, and bars placed over the dulled yellow glow of a window, leaking dusk-light into the room. It’s an alley; it’s an installation, a nightclub, an alley, a basement. The fiction wavers again at the lacquer of the wooden floorboards and what’s disquieting, then, is that the window bars could be—and are—mounted inside. A little bit of Stockholm syndrome for twilight, the theatrical stage set that we people at ChertLüdde. 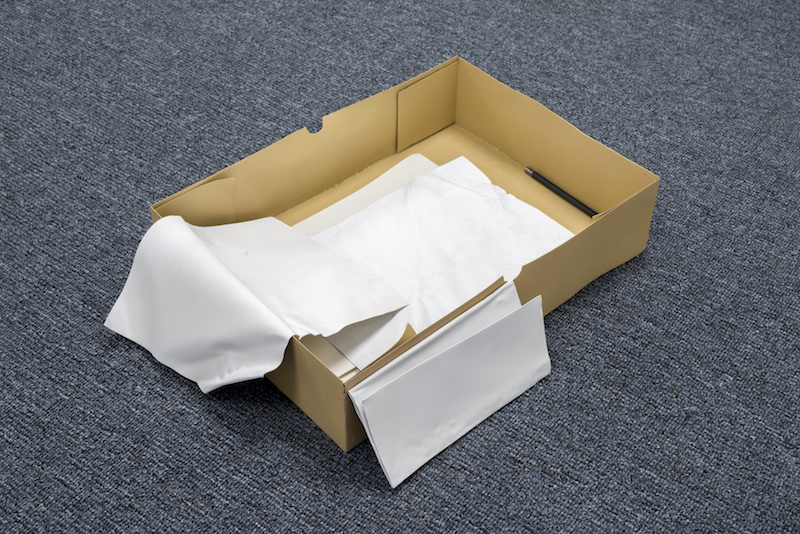 The artist stated in a recent interview, “Generally, I am interested in spaces that don’t belong to anyone, spaces of transit, lost and heterotopic spaces – not only urban ones, also those that are wild or natural.” Urbano sets and sculpts ambivalence, and his ‘Altbau’ constructions are drafty, half-written. I can’t find their function, and they are wonderfully dysfunctional. Not only are they abandoned, but his offices also fly in the face of every principle ruling function-forward startup interiors: no views to the outside world, no plants, harsh and stilling light, utterly depersonalized. There’s an ad I’ve seen on Berlin bus stops for a networking pit called Factory: Görlitzer Park. It reads, from the top: “Fully Equipped Focus Areas” / “Meet Deadlines & People” / “Space to hang out and network.” I see now on their website that they actually have a ball pit. 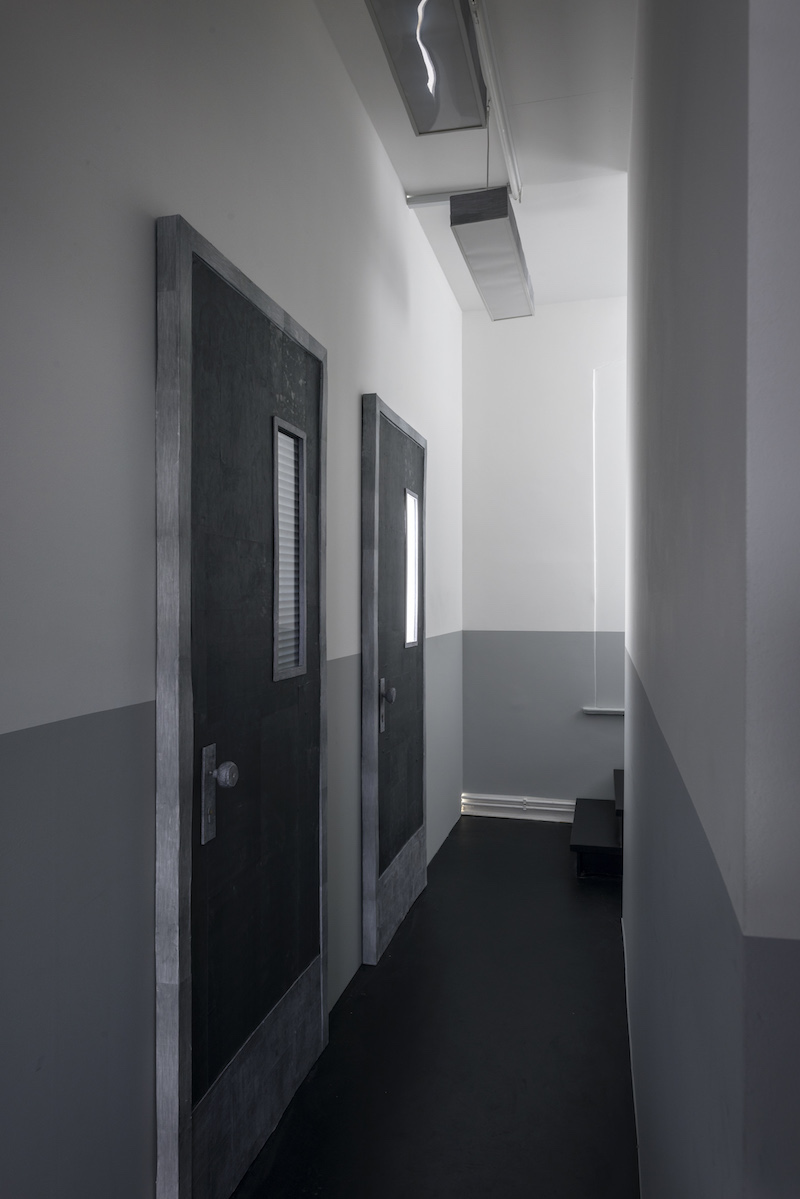 Ease, comfort, tasteful circulation, organic plums in a bowl—the startup offices I’ve seen are structured on a utopic, rather than heterotopic principle. There’s too much put at risk with the latter. What if your focus area isn’t fully equipped? As the age of Berlin’s lost lots and Altbau squats dwindles, the city’s industrial and abandoned sites are refurbished with plush encouragement and chill zones of the “next generation business club fostering innovation”, like Factory. Spontaneity, a break in the ball pit, is still directed towards work, and no matter how homely or playful, there’s always a phantasm in these places—a failed ideal of labor, wellness, and social connection all interleaving, harmonizing, pleasant, easy. So the vespers that hang in Urbano’s ‘Altbau’ are prayers for drifting, cruising, sitting in precarity. These are devalued states because they’re poetic states; drafts from nowhere blow through them.