At first, the Museum of the Bible in Washington D.C. seems like any other museum. Monumental white-marble pillars sprawl across the entire complex; large overheard glass panels emit natural light, illuminating the space. But the similarities cease there. If the other museums attempt to exhibit and complicate historical contexts—despite their own shortcomings of institutional racism, sexism, and Western-centric biases—the Museum of the Bible deliberately evades facts. It is a museum of an ideology, and its goal is troubling at best: to provide cultural legitimacy to right-wing Christians in America. 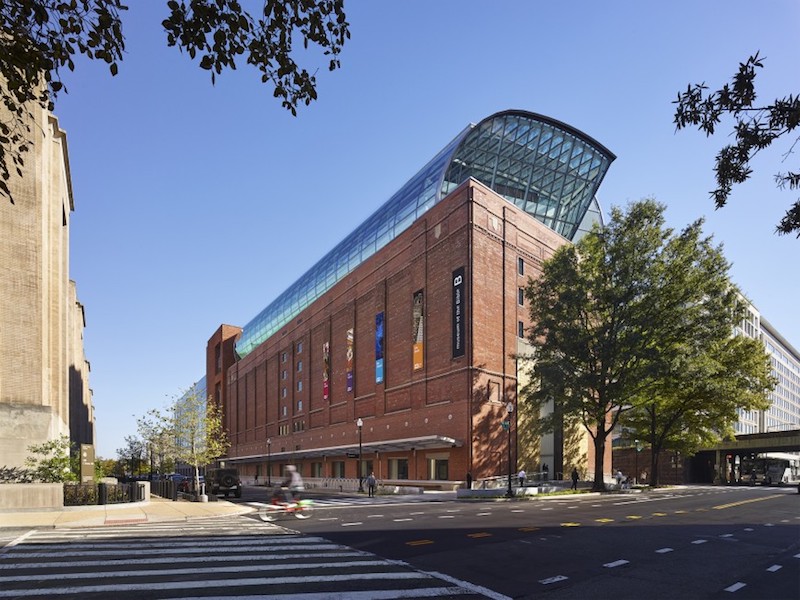 Of course, none of this should come as a surprise. The museum was founded in 2010 by Steve Green, who was propelled into the spotlight when he sued the United States of America over the Affordable Care Act, otherwise known as Obamacare. As the President of the crafts store Hobby Lobby, Green argued that his family’s religious beliefs exempted his company from providing insurance coverage for contraceptives. Reflecting this very sentiment, the museum was initially established to “bring to life the living Word of God.” Generous funding from numerous conservative Christian foundations, such as the Dick and Betsey DeVos Family Foundation, poured in.

Since then, the museum’s mission statement has changed. It now supposedly invites “all people to engage with the Bible.” Certainly anticipating the critique of proselyting, the museum maintains the necessary affectations to dodge accusations. It has a 10-year collaboration agreement with the Israel Antiquities Authority; the floor called the “History of the Bible” acknowledges the influence of the Ancient Near Eastern cultures on the book; and the museum even presents contemporary art by the Japanese artist Makoto Fujimura. By all appearances, it is cultural, academic, and inclusive. As if to distract the audience from examining more closely, the museum is offset with a truly bizarre dichotomy between cutting-edge technology and kitschy, wax sets of biblical scenes. 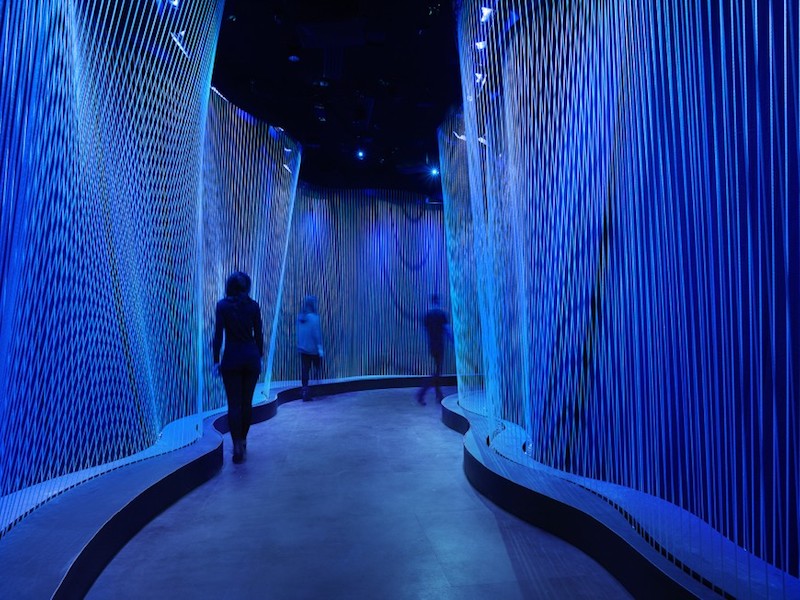 But upon even a slightly closer look, the conservative Protestant doctrine behind the museum becomes manifest. On the third floor, which addresses “The Stories of the Bible,” there are three separate doors: the Old Testament (note that it is not the Hebrew Bible), the World of Jesus, and the New Testament. Never mind the cartoon videos stationed in these rooms that explain each books-by putting Jesus in the middle of the two sections, the museum implicitly incorporates the Hebrew Bible into the Christian narrative. Jesus, the son of God, came and the holy story continues.

Downstairs, the museum’s story of the Bible gains a protagonist: America. On the floor that supposedly examines the impact of the Bible, visitors have to choose, again, between two entrances: America or the world. The room for America begins with the arrival of the pilgrims and how they brought Christianity to the New World. Throughout the rest of the floor, the exhibition merely shows moments when the Bible was cited in American history. For example, the Liberty Bell has an excerpt from Leviticus and Martin Luther King quoted the Bible at length. One possible approach would have been to explicate the sociopolitical context of the Bible in that particular time in history, but on the contrary, the exhibition seems intent on communicating one idea only: the Bible is important, and it is what made (and makes) America great. 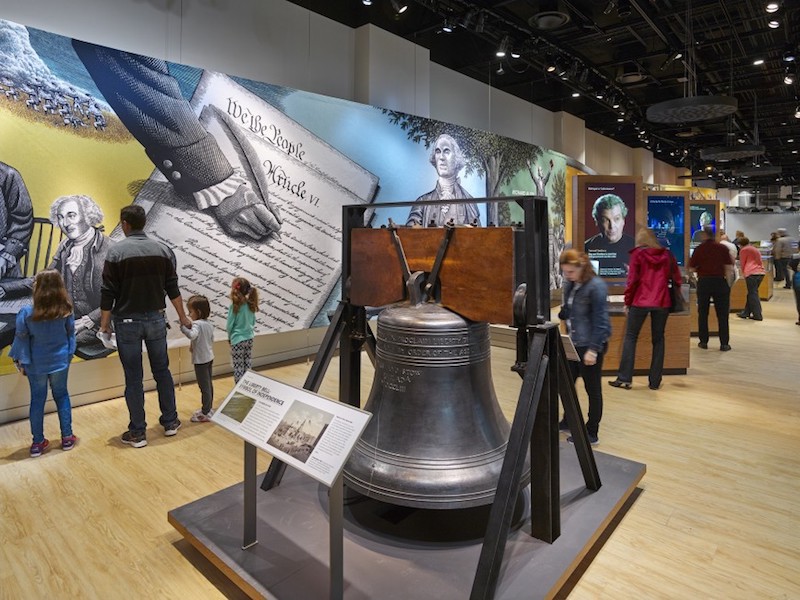 Unlike the exhibition upstairs, “America” and “the World” eventually connect—and intentionally so. After the forced emphasis on the special relationship between the Bible and America, the little sense of historicity disappears. The rich history and culture of Catholicism in Europe is glossed over, as well as the existence of other denominations of Christianity around the world. Instead, we are given accounts of how a bartender finds meaning in mixing cocktails with the help of the Bible. Large banners with quotes from the Bible in different Latin script languages flop around and this convenient vacuum leaves Protestantism as the sole face of Christianity, with America as its leader and proprietor. 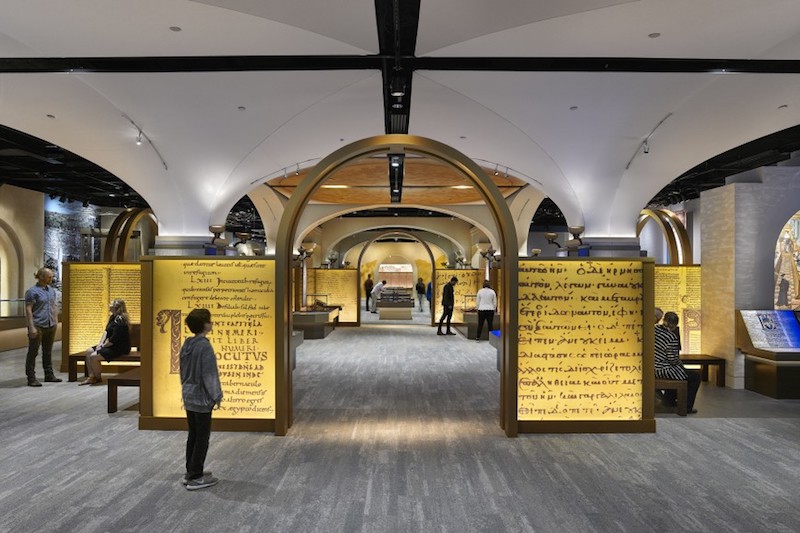 This pseudo-religious nationalist narrative—concocted out of alternative facts—is utilized to assert dominance in politics. Within the exhibition is a wall-wide screen that asks asymmetrical questions like, “In a word, how would you describe what the Bible’s impact should be on America’s FUTURE?” To its left are overwhelmingly positive answers: Important, Foundational, Essential. Notwithstanding the fact that the visitors are mostly self-selecting, thus the survey clearly skewed, how will these answers be used? A simple glance out the windows will remind you that America’s Capitol is in close proximity.

At this point, it is worth contemplating what makes this museum particularly problematic. One wants to think it is the religious ideology, but if some believe in the literal interpretation of the Bible, whose authority is it to tell them otherwise? Moreover, other museums also put forward biased narratives of history, with much less criticism. The locus of the issue lies elsewhere. It is that this museum’s sole mission is for its own sake: to bestow a visible, cultural legitimacy to right-wing Christian politics in the nation’s capital. Have I mentioned that the museum makes very little distinction between the alarming number of facsimiles and the few authentic objects? All that matters is that they are here.

As visitors leave the museum through the gift shop, one cannot help but to notice the rows of Steve Green’s book on the Bible, aptly titled ‘The Dangerous Book.’ At least they got one thing right: it can dangerous—when utilized for the wrong reason.