Founded in 2015, oqko is a collective and Berlin-based label that works at the intersection of a number of musical and visual practices. The collective’s four founders—Lvis Mejía, astvaldur, DEKJ (aka Hugo Esquinca) and smog—have developed a singular identity by means of an original approach that not only focuses on the final media but also on the medium through which it is delivered. As such, each music release has a distinct format, with an idiosyncratic concept, idea, feeling and philosophy.

oqko: ‘As Taken, So It’s Given,’ installation views // Photo courtesy of the artists

For example, 2017’s ‘Nocturne Works,’ an ambient album by young Swiss artist Romain Iannone, plays with the impression of a fragile plant resisting through time in a hostile environment. Released and distributed on cassette tapes with accompanying packets of moonflower seeds (a plant that blossoms at night and closes as dawn strikes), oqko hoped to evoke a metaphor for organic listening, with the album meant to be understood as the soundtrack to watching flowers grow. The music elicits a deeply contemplative listening experience through its non-invasiveness, spheric nature and fragility—just like the flowers it recalls. 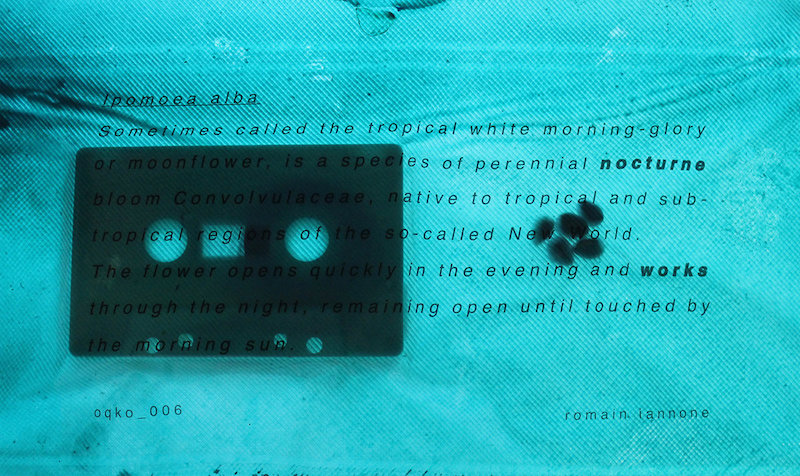 On another level, Lvis Mejía, who has performances at Mutek festival and Transmediale to his name, recently released ‘Anthropology of AmnesiA.’ An acousmatic essay addressing the human race’s desire to be remembered in the face of existential oblivion, the artist attempts to convey the phenomenon of the collective consciousness through the cultural traces we leave behind. The narrative of the 33-minute long continuous composition offers a free interpretation for his listener, despite the original intentions of various artists which are noticed through the use of samples and field recordings from different and distinct cultures.

The secretive duo -N explores the outer reaches of the realms of noise. Their second EP ‘Suggestions,’ recently released via the label, derives from live takes of field recordings as well as analog and digital sources. What Suggestions elucidates is a failed search (nothing comes up for “-N” in a search engine), as the artwork bluntly exposes. The flashes of noise and surges of electricity mirror the search engine scraping its cybernetic brain, grappling with its finite limits. It’s a challenging listen but behind the veneer of inaccessible intensity lies an understanding of the club and what makes dancers tick.

oqko’s events, which grace both international and Berlin’s local calendars, always are living examples of what the collective is about. At the label’s first birthday in the Kantine am Berghain, performances ranged from Lvis Mejia and Simon Houghton‘s ambient and jazz-infused glitch—often led by live cello and electronics—to astvaldur’s abstracted grime. There was also techno as well as a live set of proto-gabber from smog, reached after a detour through DEKJ’s harsh power noise. oqko always provides a full-on sensorial experience.

During this year’s CTM Festival, catch DEKJ, who will unveil a site-specific sound installation at Berghain tonight alongside Marcus Schmickler, Cevdet Erek and Okkyung Lee. The other members of oqko also took part in an event at Modular, where artists performed through audiovisual and live performances, displaying their ability to push the limits of today’s forms of expression.