In the spring and summer of 2017, a number of established art institutions in Europe and the United States were shaken by strong criticism over their entanglement in ongoing histories of colonialism and white supremacy. This criticism was articulated by angered audience members in blog entries, articles, open letters, and petitions. In some cases, the ensuing debates actually spurred the museums and galleries under scrutiny to publicly reconsider flawed institutional choices. 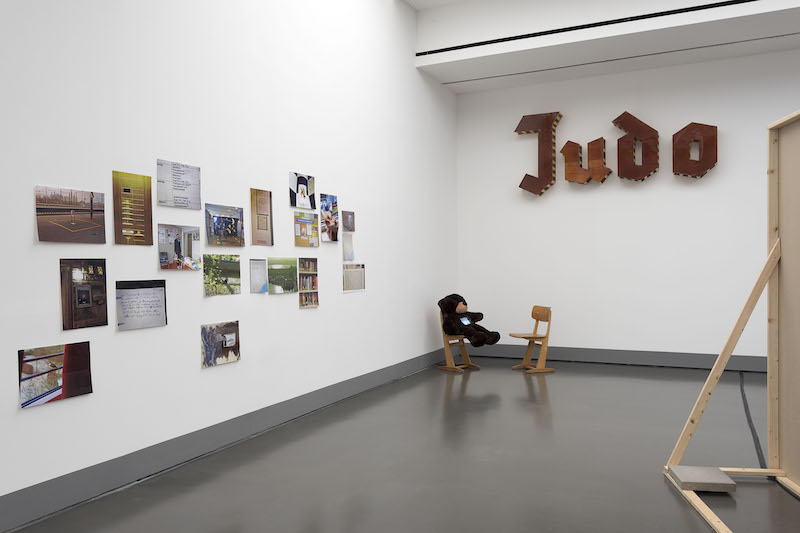 ‘Klassensprachen’ (German for “class languages”), a long-term exhibition and magazine project devised by five female academics and curators working in Germany and Austria, debuted in Berlin last summer, concurrently to some of these institutional controversies. Now on view at the Kunstverein für die Rheinlande und Westfalen in Düsseldorf, ‘Klassensprachen’ offers a low-key but effective self-reflexive critique of the systemic and interlinked nature of classism, racism, and sexism in the art world and society at large.

Despite the focus on class suggested by its title, through the range of topics it tackles, ‘Klassensprachen’ signals a commitment to intersectional theorizing—an approach that understands categories of identification as interlinked and interdependent. The exhibition addresses class difference and struggles by way of connected issues, such as the racist oppression experienced by immigrant communities in Germany and non-normative gender articulations. 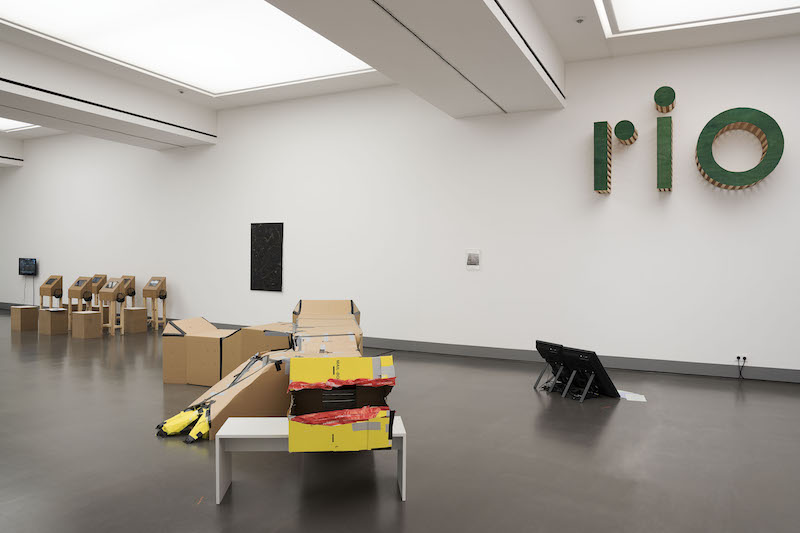 For example, the installation ‘Conversations/Assemblage – contextualizing the NSU Complex’ (2016-17) by Spot the Silence features recent video interviews with residents of Germany giving first- and second-hand accounts of racist discrimination and violence, in the context of civic investigations into the murderous neo-Nazi group, the National Socialist Underground. The video ‘Semra Ertan’ by Cana Bilir-Meier portrays the life of the Turkish-born poet of the same name who, in 1982, burnt herself to death in protest against the xenophobia she encountered in Germany. These works require concentration and elicit identification on the part of the viewer. Jarring with this, the adjacent video ‘K-CorealNC.K (section a)’ (2009) by Ryan Trecartin—a shrill mimicry of trashy self-enactment and self-exposure encouraged by commercial, networked media culture—invited an amused, distracted kind of viewing.

An emphasis on form and language was pervasive in the show, and this is where the second part of the title, ‘Sprachen’ (languages), comes in. This was manifest in narrative time-based works as well as in installations that played with language in a variety of ways (not least punning on K, starting from a quote of Russian linguist Valentin Voloshinov in the exhibition blurb: “The sign becomes the arena of C [K in German]” which can be read as: class differences play out on a formal level). 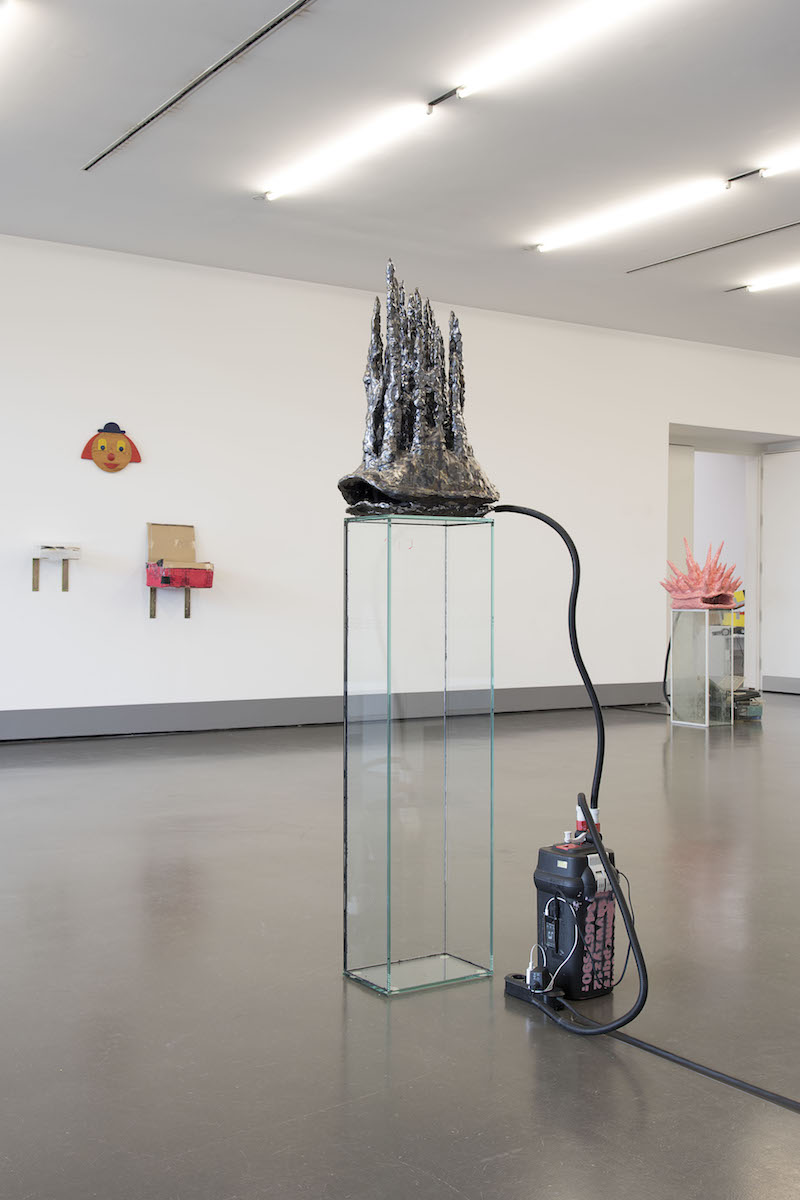 A large cardboard crocodile, a sculpture by Josef Strau titled ‘K Tunnel’ (2017), offers multiple perspectives: you could hypothetically crawl into it and experience it from the inside and below, or view it from above where it reads like a K, which puns on the German “Krokodil” and the titular “Klassensprachen.” The black-on-black painting ‘K Bild’ (2017) by Jutta Koether, which can only be deciphered at specific angles, continues the letter game. The installation ‘Template II [vertical]’ (2017) by Karolin Meunier consists of an audio recording and a projected transcript of a conversation between herself and Chicago-based artist Biba Bell about the work of architect Margarete Schülte-Lihotzky. Schülte-Lihotzky’s 1920s kitchen designs paradoxically seek to both accommodate the body’s movement and rationalize (i.e. keep to a minimum its occupation of space).

Complementing the pervasiveness of language in the exhibition and its accompanying public program was the magazine ‘Klassensprachen’, which was launched in Berlin. Here, the notions of intersectionality and the relational nature of class were articulated. In an essay, German theorist Frank Engster traces the historical trajectory of the concept of “class.” In another piece, US poet Juliana Spahr reflects on her own family: “if we were middle class on the block, and lower class in the nation, we were upper class in the world, or in other words, the terms were so relationally slippery they were hard to define.” Significantly, each section is introduced by a conversation between the curatorial and editorial team and individual artists and theorists. More than just providing the theoretical framework for the exhibition, the magazine epitomizes the dialogic, internationally networked, temporally extended character of the enterprise. 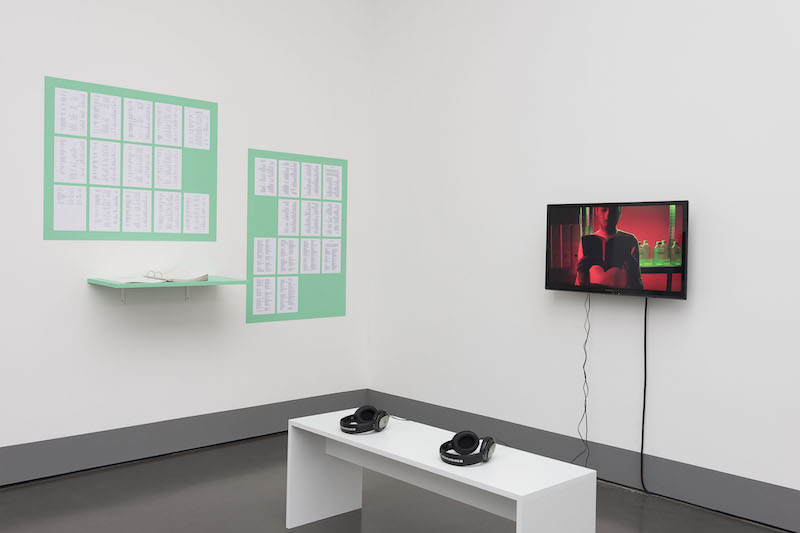 ‘Klassensprachen’ makes a statement about art institutions needing to address class, race and gender as issues as fundamentally connected, all the while placing an emphasis on form that eschews didactic audience address. Thereby, the project gives intersectional theory a platform inside the institution of art, injecting academia into the gallery (notable moments in this respect were a lecture by Frank Wilderson on Afropessimism and queer, spoken word performances by Keyon Gaskin and Linda Stupart). Importantly, this critique is articulated from an institutional standpoint. Neither an audience member’s reaction nor a single artist’s point of view, it is a statement coming from an overlapping space between the worlds of academia and the arts.

Having said this, a small but conspicuous blind spot of ‘Klassensprachen’ is that it does not address the immediate institutional contexts in which the exhibition has been held. At both venues, the exhibition seems but an iteration of a larger conversation held by a network of artists and theorists. In a recent Texte zur Kunst article, US scholar Monique Roelofs argued that “intersectional stances in the arts require revised forums for aesthetic publicity.” Insofar as ‘Klassensprachen’ transcends the physical and temporal constraints of the exhibition itself (as summarized by the magazine and public programming), the undertaking projects precisely what such an expanded forum might be.