Berlin-based Icelandic artist Anna Rún Tryggvadottir’s most recent exhibition, ‘Garður/Garden’ at the Reykjavík Art Museum, envisioned an altered state of nature as materials coalesced in a durational performance. Tryggvadottir transformed the protective function of rocks that once separated land and sea on Icelandic beaches into aesthetic concerns. The rocks became sites of interaction between their salty surface and the vibrantly colored liquids hanging above in IV-like structures, which released one drop per hour. Similarly striking colors and playful viscosities appeared in her paintings, which lined the museum walls. This performance in-flux reconsiders boundaries between the natural world and human intervention through the facts and fiction of her geological phenomena. The artist spoke with Berlin Art Link about issues of geography, feminism, and materiality that are present in her practice. 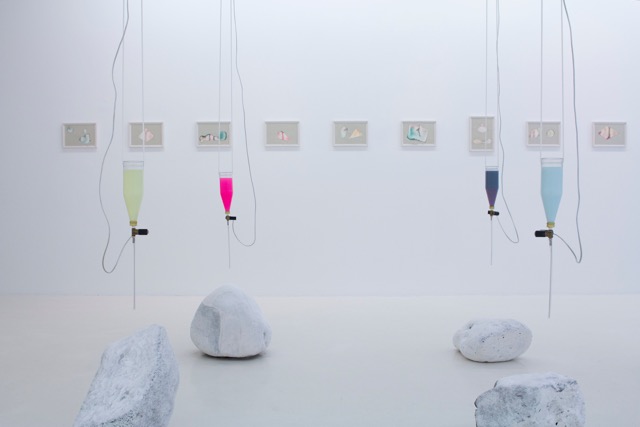 Jack Radley: ‘Garður/Garden’ is linked to an ongoing endeavor called ‘Snörun/Ensnare.’ Can you talk more about this project?

Anna Rún Tryggvadottir: ‘Snörun/Ensnare’ is a project I embarked on in Greenland in the summer of 2017 but started five years back when I was in Greenland for the first time. Last summer I spent three weeks there in a tiny hunting village, hunting for Icebergs, bringing them up on shore and attempting to render their shape and biological information into a sculpture, a three dimensional material recording. When you look out at the ocean in Disco Bay you see a horizon full of white mountains, if you are not from around there the sight is compatible with the flatness of highlands and mountains peeking up. Knowing that it’s a floating world of landscape that is rapidly changing leaves you with a deep sense of confusion, and emphasizes a gap or displacement of knowledge. The glacier is a nest of geological data from before the beginning of the last ice age, and this information is now getting chunked off into the ocean at accelerated speed. I was fascinated by the shape that the glacier takes when it breaks into the ocean and wanted to both try to preserve a fluctuating moment in the lifespan of an iceberg and the information stored inside. The sculptural recording is a testament of our perception—because for the nature itself, nothing has disappeared—material has only continued in its endless cycle of transformation.

‘Garður/Garden’ at the Reykjavík Art Museum is connected to ‘Snörun/Ensnare’ not in a linear way but through an underlying investigation of how we (with our limited scope of perspective and senses) define ourselves in relation to nature. When does nature that we domesticate or incorporate into our use become “non-nature” or an artifact, a construction, a garden (and when does our interaction with nature become nature again)? 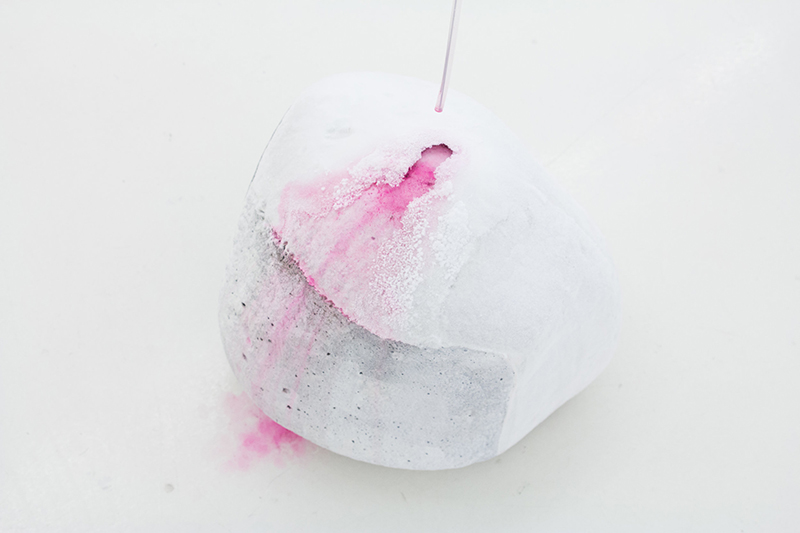 JR: The rocks in your exhibition were taken out of their protective places between the land and the sea. Are we to consider the land outside of the gallery space, now more vulnerable and exposed, as part of the work? In this regard, how does your practice relate to Robert Smithson’s idea of the “non-site?”

AT: These stones were taken out of a constructed abundance, a huge mass of stones in a manmade wall that separates the land from the sea. They had already been collected and placed there. Unlike Smithson’s non-site works, the act of relocation or attention to their place of origin is not a central focus for me. Although his work speaks to me of dislocation and belonging in a way that can easily become a metaphor for a human condition, I am using natural objects within the museum setting as an investigation of the intersection between nature and the humanly constructed. The stones definitely bring an element of displacement, but at the same time they transmit groundedness, geological time, and age in a way that few other materials can do. 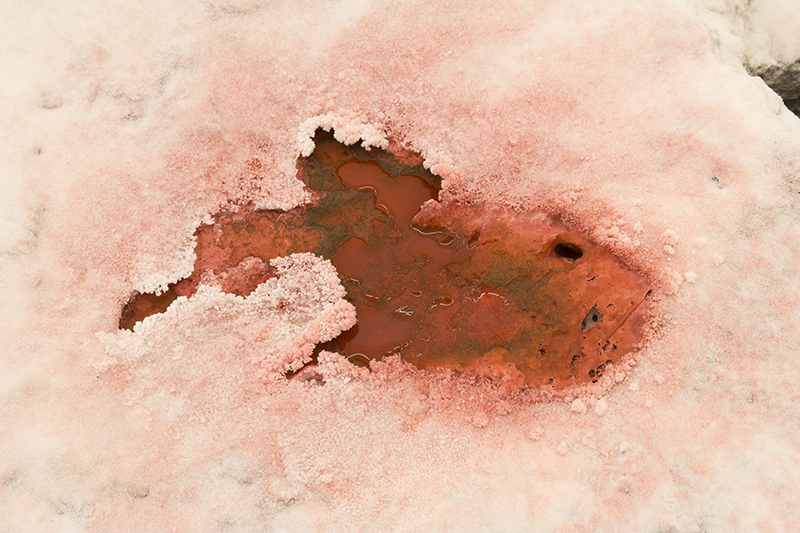 JR: Your work—a “material performance”—is constantly changing. As the water erodes salt, it also leaves a trace of color, just like nature itself. But this occurs in the museum space, orchestrated by the artist. What do you see as the relationship between nature and culture in your work?

AT: The work is built up of stones that were turned into sculptures, dressed up for the occasion of this material performance, that are staged in a collaborative action with dripping synthetic colored liquids, which activate and transform the sculptures. The relationship between the natural and the artificial is exposed by the entire setting and develops as the performance unfolds. New “nature,” or detailed miniatures of natural processes, get constructed out of the exchange: building up, eroding, dissolving, and decreasing.

My role within the museum setting is more of a director facilitating a collaboration. By giving agency to the materials themselves, I need to negotiate my own, installing the framework for the work but then letting go of the situation. The focus is not on the result but on the process itself. The materials get space and time to manifest their own potential/narrative in the moment. I think we can learn a lot from witnessing the detailed and nuanced progression in these inanimate materials. Their presence informs us, if we pay attention. Through the work I am reaching for a space where our distinctions of nature and culture are challenged and blurred, and I think that the museum is a good facilitator for such a quest. It’s a public safe space for reinventing interpretations, metaphors, mysticism and whatever else an artwork involves. 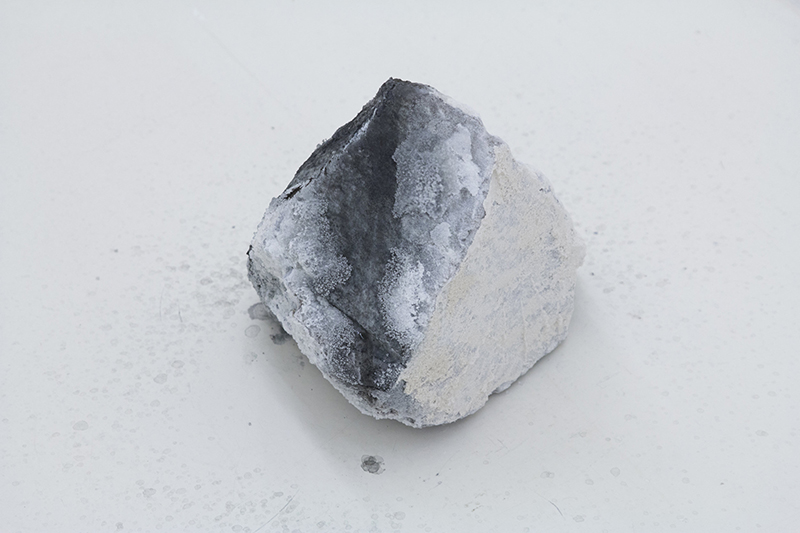 JR: Can you talk a bit about the work ‘Garden’?

AT: I am tempted to quote a lecture that Elizabeth Grosz gave as the keynote address at the 2007 Feminist Theory Workshop in relation to the description of ‘Garden.’ In this lecture she spoke of the intersection of becoming, bringing words to the moment when life gains order from chaos—a process not only associated with human cognition but also with the intelligence of matter, of all living material:

“In the beginning and a beginning has to be understood in evolutionary terms… life can contract the past into the present, or life remembers. The first form of life is the most simple cell, and what the cell carries within it is the memory of its previous action, and this memory is contracted into a habit so life brings the past into coexistence with the present whereas the material world is reborn anew every minute, the material world has no need for the past or the future because it exists perfectly well only in the present. And what life brings to the materiality of the world, this is Bergson, is hesitation, or surprise, temporality, becoming. So life brings the past into the present, which is another way of suggesting that life brings latency or virtuality or potential to the materiality of chaos. Life brings the possibility of finding some order, of extracting enough consistency to enable life to elaborate itself to bifurcate to divide to experiment with difference and to constitute individual and collective variability, this is my Deleuzian translation of Darwin. Evolutionary story translated into the language of difference.” 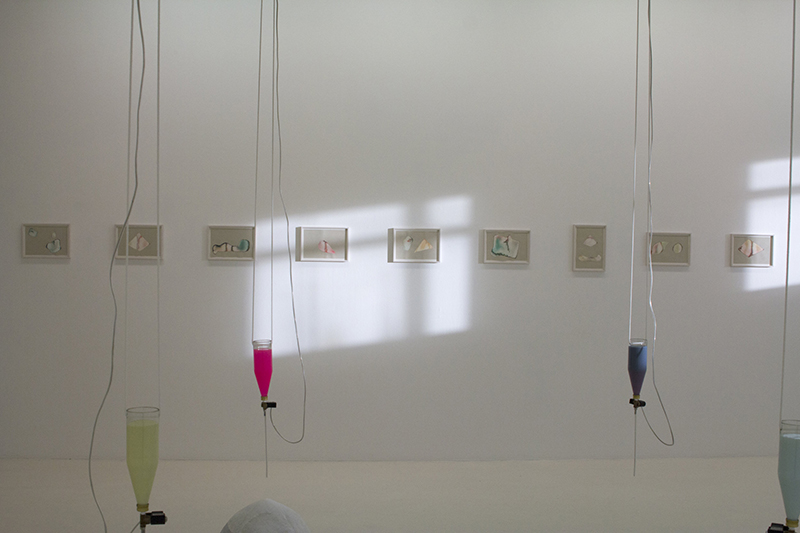 JR: How do the paintings in the exhibition relate to the performative installation?

AT: The paintings are sketches that relate to the stone sculptures in the space and also to the icebergs in Disko Bay. They show stranded forms on a flat uniformly coated page. They are not sketches of the stones/sculptures, but their ideological predecessor. The forms on the pages have different hues of colors and are made in a way that correlates to the surrendering of my agency or authority in the installation. My drawing practice informs the installation practice and vice versa. 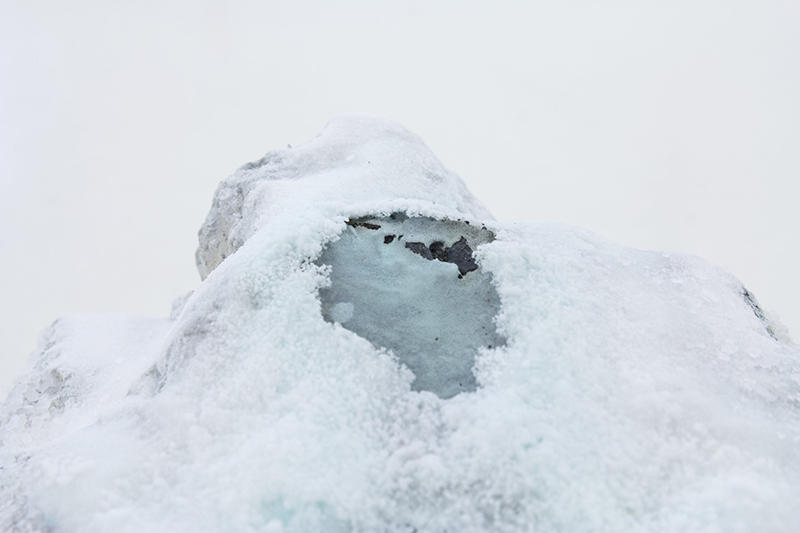 JR: Iceland is known for its dramatic landscapes and geological features. How has your upbringing there influenced your practice? What led you to decide to work in Berlin?

AT: I think it has affected me in number of ways, like one’s environment is bound to do. It is a small nation in a vast country with very extreme nature and weather conditions. For me the exposure to the rawness of the nature and the climate manifested an intrinsic awareness off my powerlessness towards natural forces. I think it reflects back into my work through this constant negotiation of authority and agency between me as the facilitator of an uncontrollable processes, of which I can never be in complete control.

I recently moved to Berlin in order to obtain a new relationship to my practice. Iceland is a small society, it’s wonderful but extreme in almost every way. Both in terms of the climate but also in terms of the rhythm. I wanted to reflect on my work and the world in a different context for some time and Berlin is a great place to do that.