In Canyon Castator’s world, the absinthe drinker finds comrades, the feast of the gods gets out of hand and the death of Sardonopolis is the result of frat hazing. After breaking his leg skateboarding, Castator moved from Colorado to New York and taught himself to paint. Ironically, the collegiate debauchery on the surface of his paintings stems from someone who forewent university. Now based in Los Angeles, the artist’s dark-humored work is in a fresh school of contemporary figurative painting, with the stylistic synthesis of Allison Zuckerman, the cerebral grotesqueness of Celeste Dupuy-Spencer and the exalted debauchery of Jordan McGirk. The bad boy of the bacchanal, Castator asserts himself as more painter than partier. On the occasion of ‘Pissing Match,’ his debut solo show at Postmasters in New York, Berlin Art Link spoke with the artist about the technological iteration within his process, the disordered narratives of his scenes and the complex psychology behind his characters. 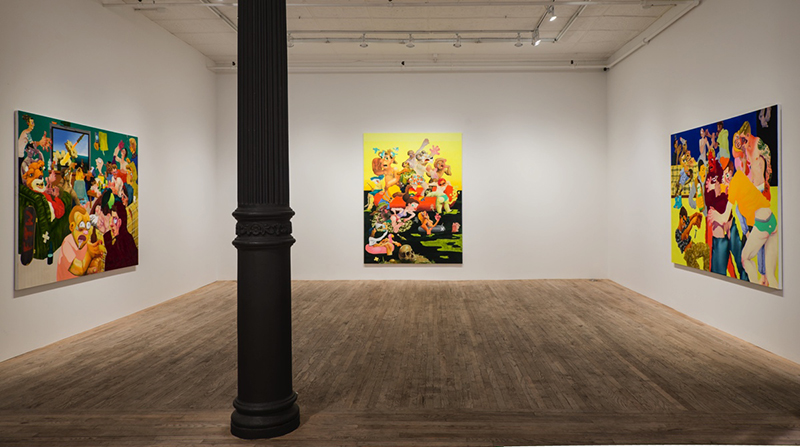 Jack Radley: Which larger issues does your use of party culture serve as a vehicle to address? What do you consider to be the true content of the work?

Canyon Castator: The college house party became a reoccurring backdrop for my exploration of what I see as a widespread disorder in contemporary life: herd mentality. The willingness to abandon one’s own centralized thinking and moral code for that of blind collectives is a sweeping phenomenon within collegiate party culture and having grown up near University of Colorado Boulder (a notorious party school), it was a subject I felt familiar enough with to address. By bestowing severe cases of this disorder onto my characters, I found a willful ignorance in them, perfect for the world I saw them operating in. 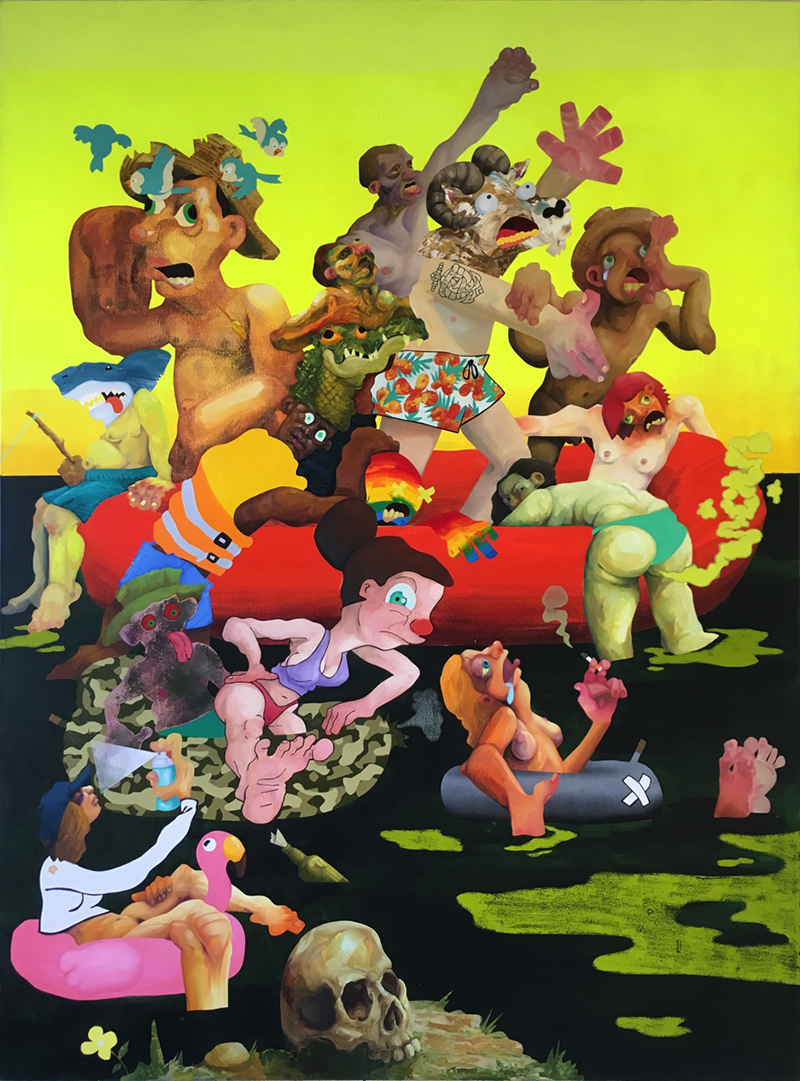 JR: A momento mori lurks in the foreground of your painting ‘SOS.’ Is it fair to read your entire show, ‘Pissing Match,’ as a momento mori for the sustainability of this lifestyle?

CC: I try to use a personalized code of symbols to rationalize myself, the developing narrative in my work. I guess a skull dead center in the foreground is a pretty obvious one. Though the weight of its subject matter shifted significantly, ‘SOS’ started as a contemporary reimagining of Théodore Géricault’s ‘Raft Of The Medusa.’ The satirized characters in my adaptation veer away from aura of cannibalism, but share the helplessly adrift and doomed feeling of their prototype. It was, for me, a way to hold a mirror up to what I see as a group being exposed to the possibility of drowning in something less literal than the Mediterranean Sea. Maybe I should have thrown a vulture in there as well… Shit. 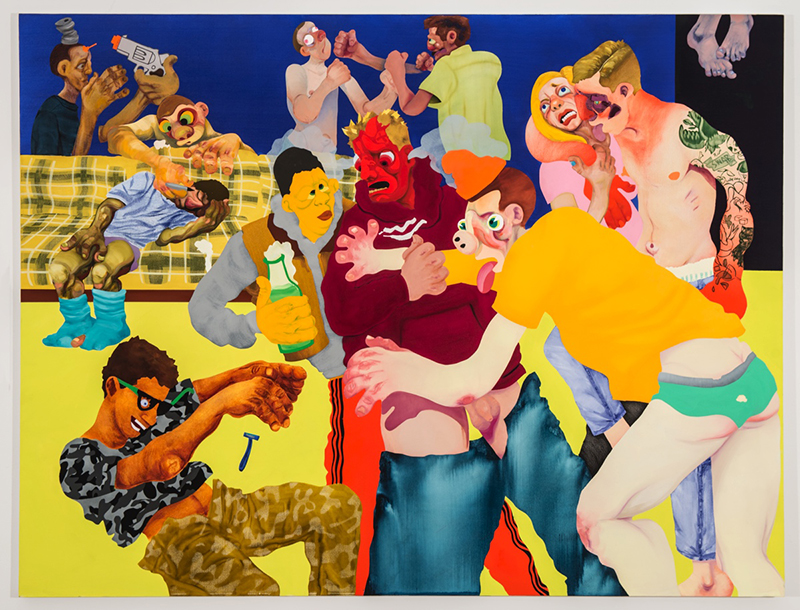 Canyon Castator: ‘Boys Will Be Boys’, 2017 // Courtesy of the artist and Postmasters Gallery, New York

JR: Can you discuss what it was like to teach yourself oil painting?

CC: In my experience, teaching yourself to paint in oil is really easy: you just make terrible paintings for three years, bad paintings for two years, paintings that are just barely tolerable for about a year and a half, and then, eventually, you start making a decent painting every once in a while if you’re lucky. I just recently started making paintings I can stand to look at. 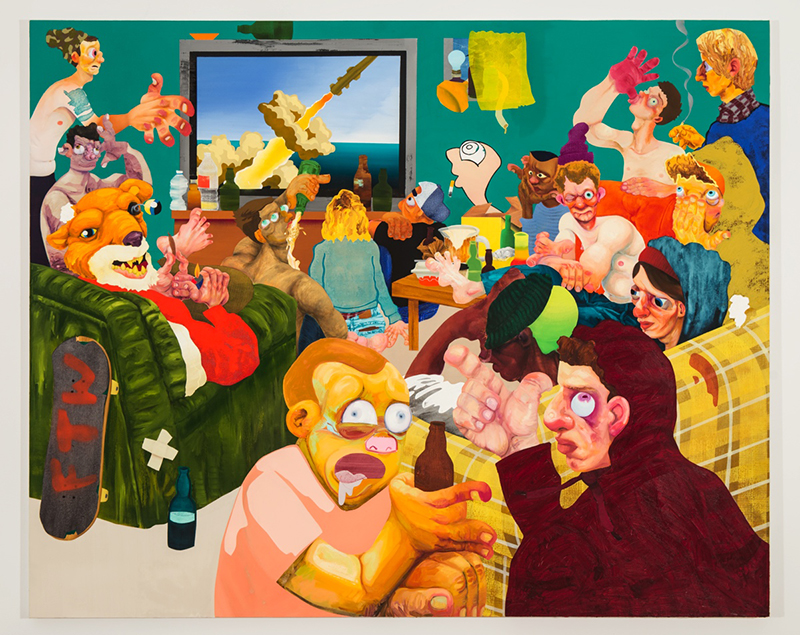 Canyon Castator: ‘Of course you know this means war’, 2017 // Courtesy of the artist and Postmasters Gallery, New York

JR: What techniques do you employ to create the works, starting from their inception?

CC: My paintings start as drawings on the iPad. That is where I begin to develop the characters before I throw them into the larger scene. The characters are really the main compositional and storytelling elements in my paintings, so I spend a lot of time working through different arrangements and possibilities, trying to find where each piece of the puzzle fits, while at the same time changing the shape of the puzzle piece. Should this guy be looking this way? Should his head be like four times as big? What’s in his hands? What happens if his dick is out? Really critical stuff. These drawings become the outlines for the paintings, so once I have something that works on the iPad, I project the drawing directly onto the canvas and trace it in pencil. At that point, I kind of abandon the technology and start painting. 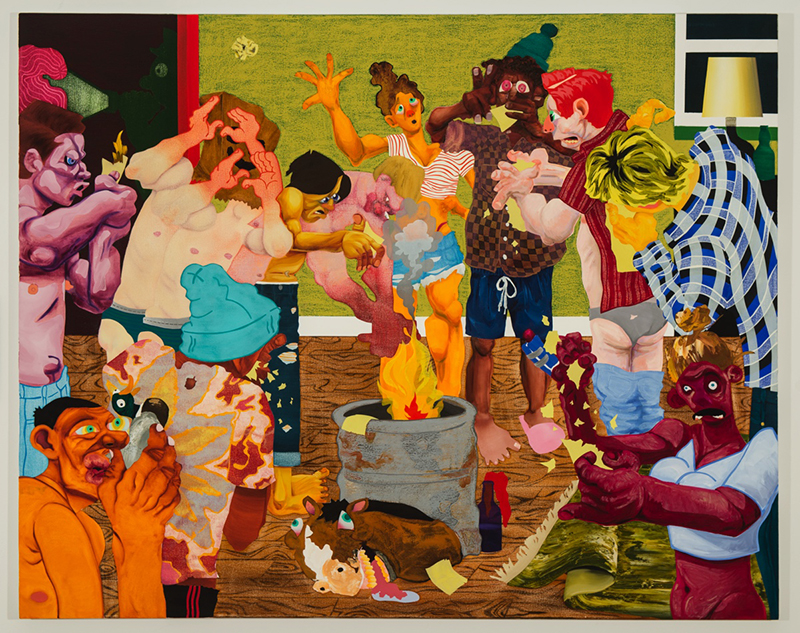 JR: Today we’re seeing a great resurgence in visibility of figurative painting. What is it about the figure that you, or you think others, are attracted to in 2018?

CC: I think it’s the reintroduction of the narrative, and that’s dragging the figure along with it. I feel as though the message-less silence of high-concept low-yield abstraction fit perfectly into the mass complicity of the post-Bush/Obama years. The mission was accomplished—and we finally weren’t a nation of nationalist racists—until it wasn’t and we weren’t. Its clearer now than ever that in a nation led by an authoritarian bigot, reinforced by a political system with no visible difference from the wealthy class that owns it, and in our 17th year at war with no plausible end in sight, there isn’t room for bullshit inconsequential decoration in the conversation. 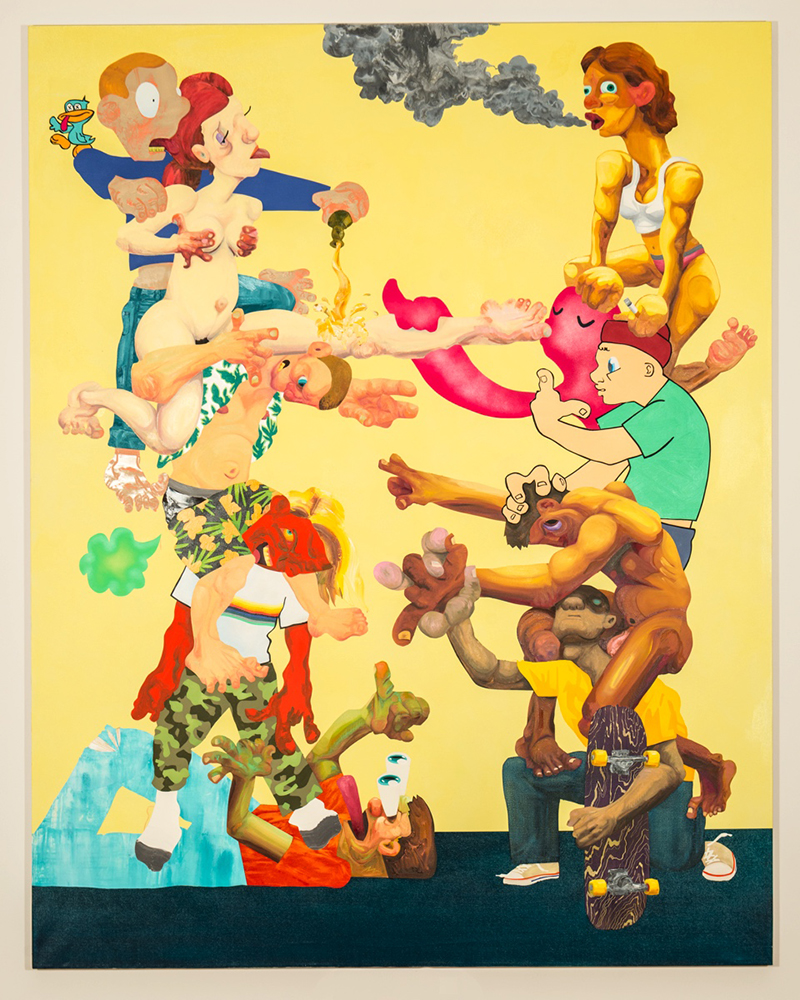 Canyon Castator: ‘The Pillars of Society’, 2017 // Courtesy of the artist and Postmasters Gallery, New York 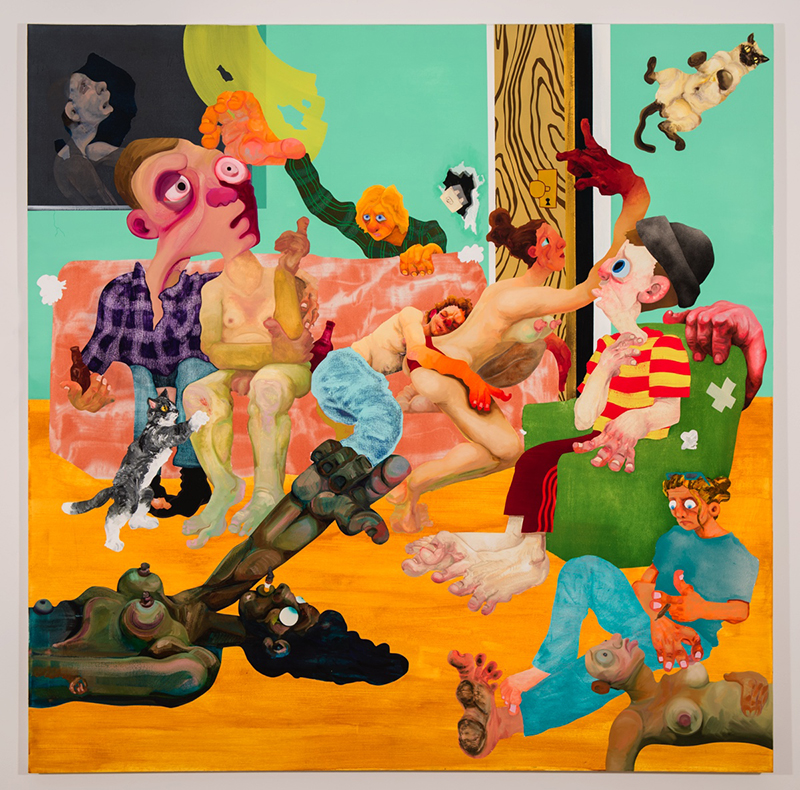 JR: Your paintings at Postmasters are characterized by a collage-like synthesis of figures whose rendering evokes claymation, pin-up models, and Tex Avery cartoons. Why do you choose to combine these styles simultaneously in single images?

CC: I can’t stand the one-liner, singular approach paintings, so I try not to make them. What I love about Tex Avery is that he isn’t a heavyweight one-hit-punchline guy. His cartoons are relentlessly packed with gag after gag after gag, as each strike strings you along the storyline. If you stop to laugh for too long you miss something. I try to make my paintings the same way; I want to make the viewer unable to settle in any one area, because there is something right next to it that drags them out of that comfort. The variety in the way I choose to render the characters is one way I attempt to create that discomfort. 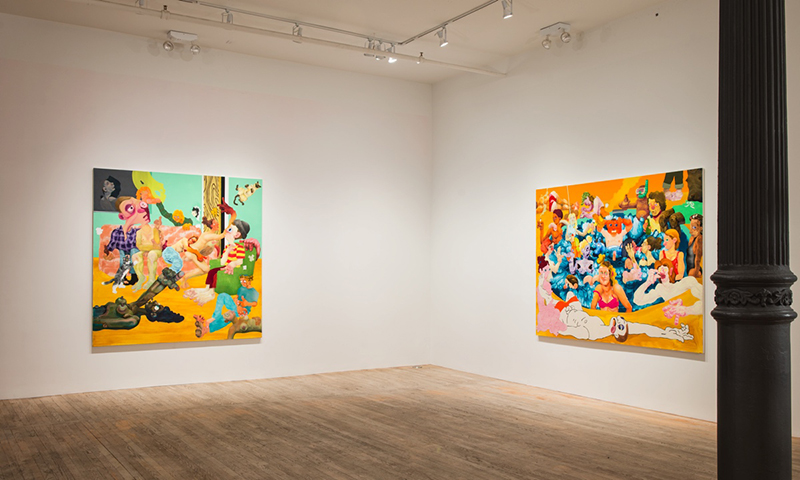 JR: Do you see the viewer as a voyeur to or participant in this hedonism?

CC: I like to envision the viewer having just opened up a door in the fourth wall of the scene, being forced to step over a passed out drunk dude on the floor to enter, and then being shoved into the chaos.