“No credible scientists would ever build anything like this because it would ruin their careers,” boasts Klara Hobza, smirking at the artistic endeavor standing before her, ‘Animaloculomat’ (2018). This impressive, fully-functional photo booth renders images of participants as seen from the imagined perspective of one of six animals: a jumping spider, horse, dragon fish, bat, octopus, or snake. For 1€, visitors receive a print of themselves that explores our cultural fascination with nature and the relativity of perception. The booth’s exterior claims: “Sehen Sie sich, wie ein Tier Sie sieht! (See yourself through the eyes of an animal!)” Hobza does not restrict these visions to conjectures of science: “As an artist, I can step in and make an interpretation of things where science ends.” 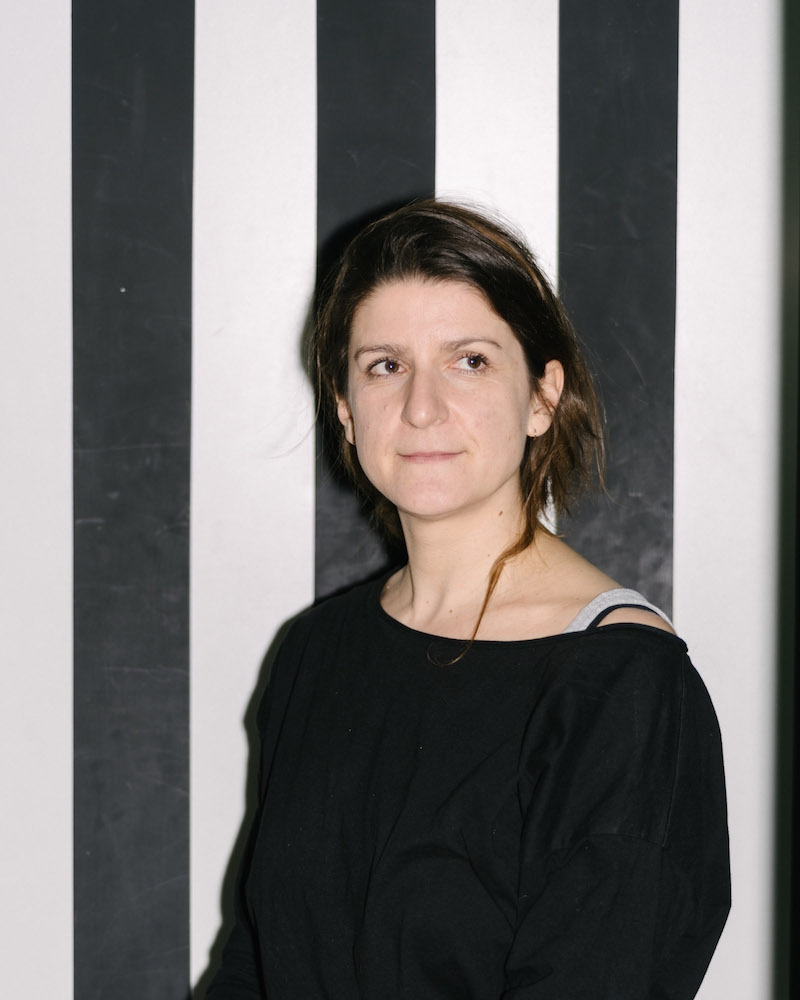 Hobza recalls childhood visits to natural history museums, relishing animations of dinosaurs, planets, and other natural elements protected from the confines of absolutism by their designation as “artist visualizations.” She originally developed an iteration of ‘Animaloculomat’ for an intervention at the Museum für Naturkunde Berlin. While the artist notes that parents sometimes shield their children’s eyes from contemporary art, her work is inviting, exciting, and accessible for younger and older audiences alike. Fearlessly reclaiming imagination in an age that increasingly emphasizes “proof,” Hobza puts a creative spin on traditional portraiture, artist visualizations, and selfie culture (think: dog Snapchat filter on steroids). These customs and concerns stand central to her current exhibition at Soy Capitán, the gallery space where we unexpectedly meet for our studio visit.

The conceptual nature of Hobza’s practice affords her “studio” a certain degree of mobility; although she does have a formal workspace, she hardly ever spends time there. Hobza oscillates between her home and the installation sites of her projects. “The drawing and computer editing I usually do at home, rarely in my studio. When I build stuff, it doesn’t make sense to pre-fabricate it in my studio because I’m not that kind of expert sculptor who constantly tries materials. My work is not necessarily about the materiality of plywood; I don’t need to experiment with pottery to see if the form is good. It’s more planned, like an illustration or visualization of an idea. In a way, I don’t really need a studio.” Although her projects are conceptually driven, they are not realized without a fair amount of grunt work. 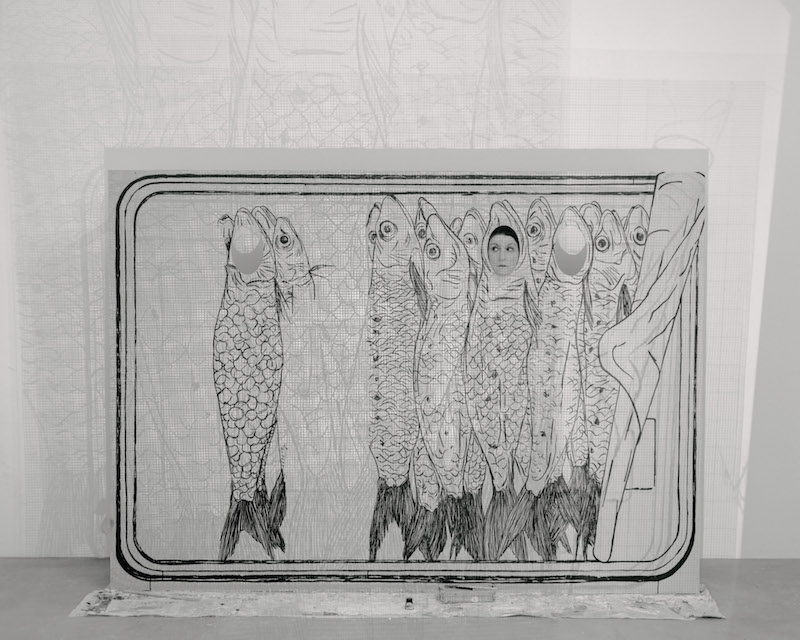 Hobza’s diligent practice requires meticulous craft. When I arrive, she is transferring an intricate drawing of sardine scales onto a large piece of wood, which will become ‘Unter Sardinen’ (2018). The artist creates a “Your Face Here“ style cutout with holes in which visitors place their heads to become the sardines. This experience echoes the expression “packed like sardines in a can.” But Hobza does not work with a computer illustration and digital projector to translate the patterning; instead, she reverts to an overhead projector. “Sometimes, I think that the irregularities and mistakes that happen with analog technologies can add unexpected visual components with which I like to experiment. In this case, I find it easier to trace with this kind of light than with a video projector, but I also like how it distorts the perspective when you put it in place. It’s not a 1:1 trace from the original drawing. I’m playing around with it.” Her practice is full of play, which stems from her natural curiosity with animal life. 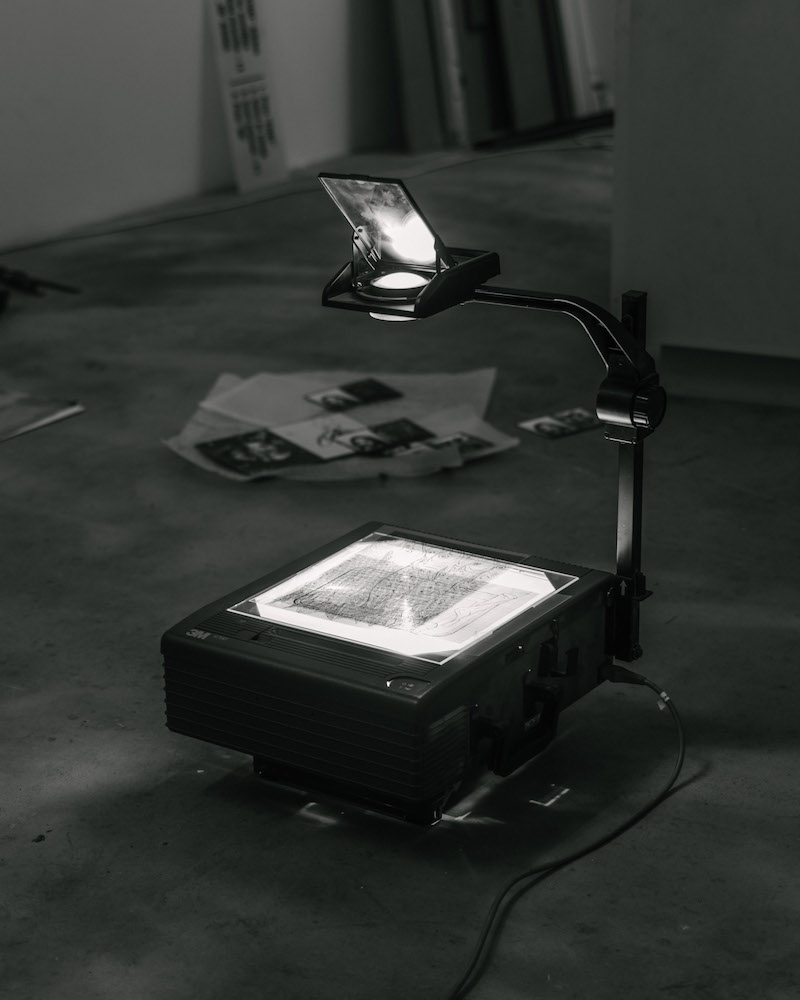 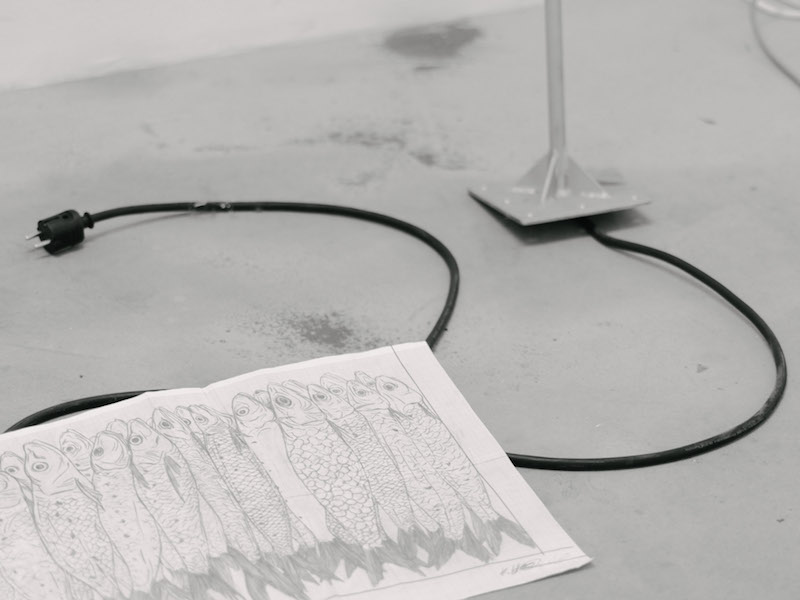 “I think it’s a natural inclination to be curious and explore and have a sense of wonder… enthusiasm gives me motivation to make art. While some artists get their drive from sadness, frustration, or anger, that doesn’t work well for me. I have an idea and go for it on the positive spectrum of emotion, like curiosity or mischief. That’s more my tempo.” Her practice is driven by a playful fascination with our desire to understand and imitate animals. 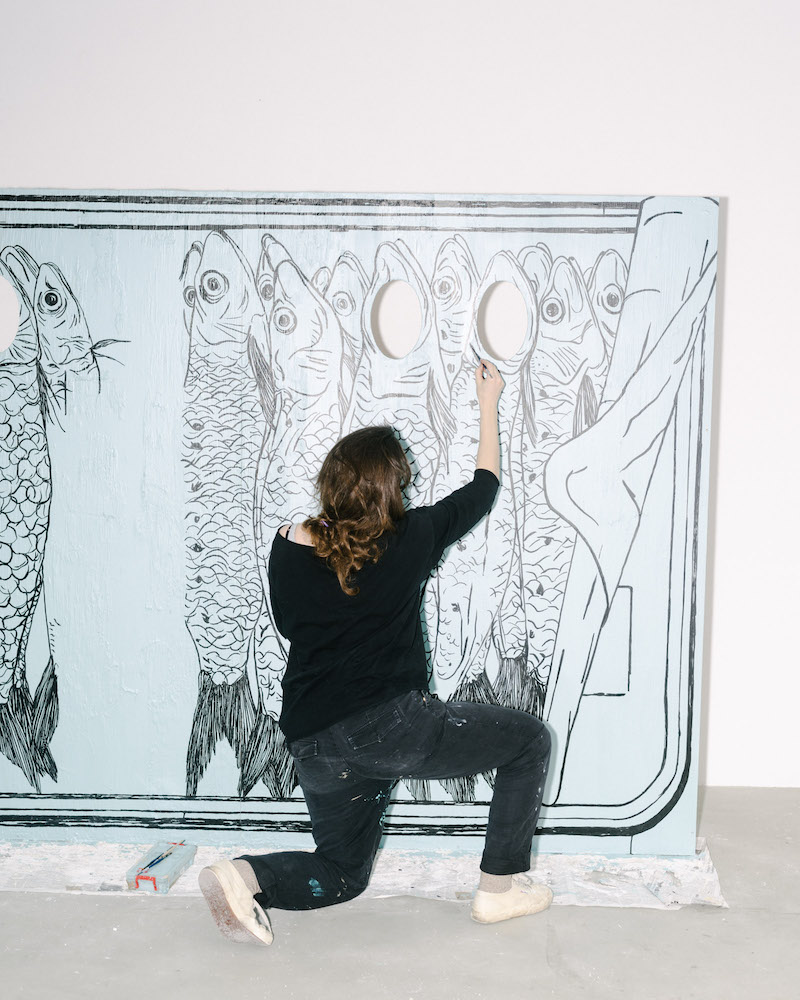 “I think on an emotional level, many people’s desire to become animals has to do with some kind of permeability. You know, the experience when you’re out in a vast, natural environment you can feel one with all life forms, and there doesn’t seem to be a distinction anymore.” If her cultural fascination with the way we experience nature feels connected to Mark Dion’s practice, this may not entirely be coincidental—she studied under Dion while earning her MFA at Columbia University in New York. “Another reason could be the empathy you give and receive, the disappointment you feel for the disappearing connection with animals. But then also humor, because it’s kind of hilarious when two species clash or interact with one another. There’s always this finish line of how far your own perception can go. You have an idea of how the other will perceive you, but at the same time it can’t be true because you’re not the animal, and you can’t know what they’re knowing or thinking.” 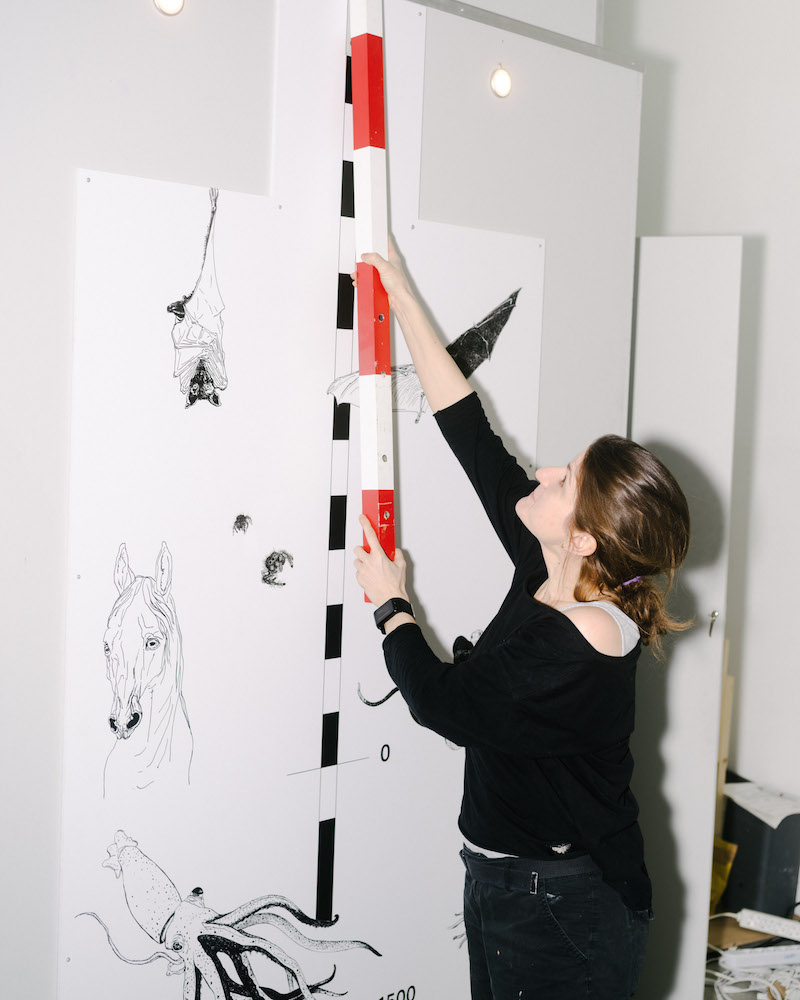 Although she can’t know what animals think—or how they think—when Hobza has eventually looked at the scientific data, a lot of her approximations to animal perception have been intuitively spot on (particularly the dragon fish). Her show at Soy Capitán, titled ‘Animaloculomataurus,’ combines her ‘Animaloculomat’ and the ‘Greek Minotaur’ (2018), a mythical creature with a bull’s head and human body. She mimics this corporal orientation in ‘Animaloculomat’ and inverts it in ‘Unter Sardinen.’ 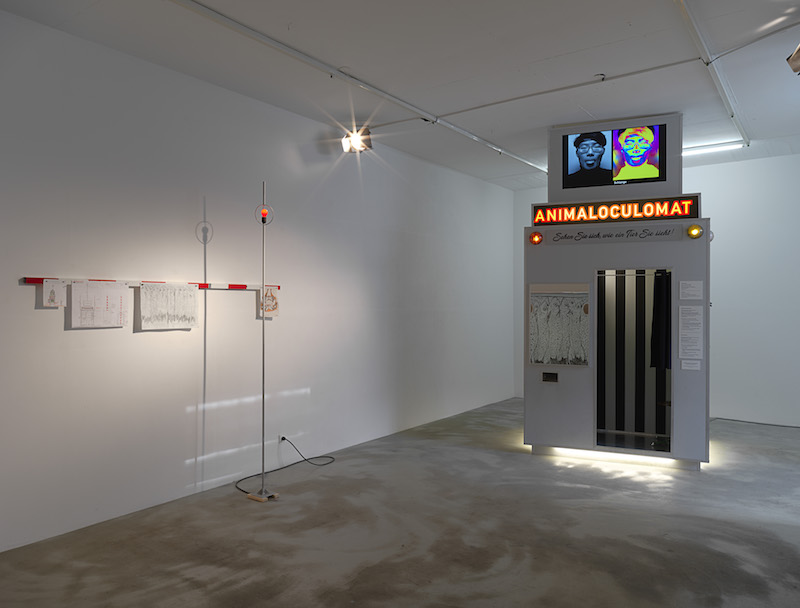 While her process is not collaborative, per se, she works with a skilled team to realize these artistic feats. “The older I get the more stubborn I get, and then I have very specific ideas of what I want. So when I put together a team for things where I need technical help, camera person, or sound people, I very much work like a director. There is a certain controlled space for interpretation of ideas of theirs, and I’m very open to that, but I have a very clear vision of how it’s going to look. Still, each material and technology brings its own creativity. For example, Mario Klingemann, the guy who developed all of the code for ‘Animaloculomat’, is also an artist, and this is necessary. I would give him a Photoshop mockup and say to him, ‘This is ideally how the result would look from a squid’s perspective.’ Then he undergoes a creative process in his mind and experiments to see how code could translate that idea.” 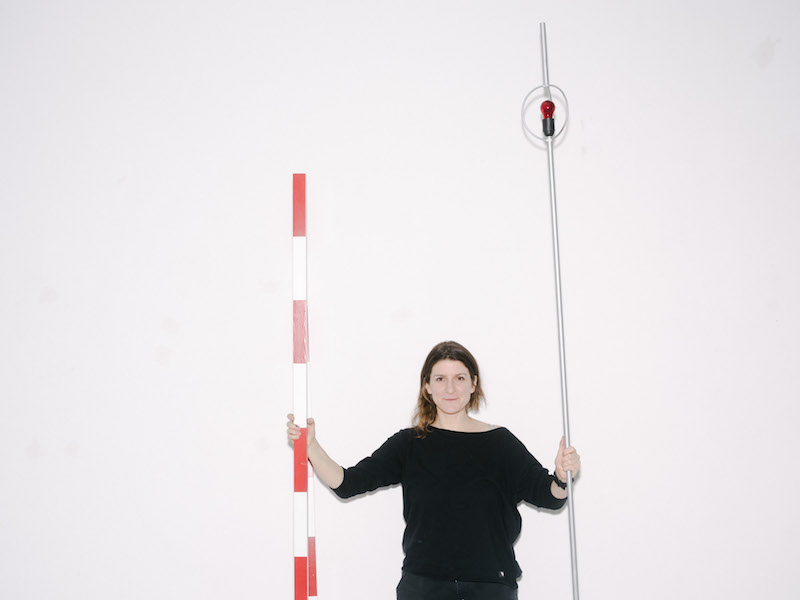 Hobza’s interactive work occurs itself inside and outside of the gallery. The artist is currently undertaking a 30-plus year scuba diving project, ‘Diving through Europe,’ which evokes the symbolic density of rivers and European borders, ecology, and history. After taking years to learn scuba diving, Hobza charted out on her endeavor. However, a traumatic experience has since required her to take a break, but Hobza does not let this hinder her creativity. For example, while she was recovering from the immediate aftereffects, she attended an art symposium that was “a very badly watered down post-modern relativism kind of talk” on perception. She started gazing around the room, out of boredom, and noticed all kinds of flies and bugs buzzing around. “That’s the actual alternative reality you’re trying to talk about! Get your head out of humans—there is so much perception going on as we speak, even just in this room!” she thought, which inspired her current exhibition. From embodying minuscule spiders to conquering fortuitous bodies of water, Hobza’s practice adjusts our awareness of the world around us. The artist instills greater empathy in viewers through strategies of imagination, humor, and ironically, self-indulgence.