New York-based artist Brian Whiteley caused massive controversy when he anonymously installed ‘The Legacy Stone’ – better known as the ‘Donald Trump Tombstone’ – in Central Park on the morning of Easter Sunday in 2016. Within a few hours, the 500-pound gravestone, inscribed with the name of the then presidential candidate and the slogan ‘Make America Hate Again,’ was seized by the police. A frenzy of media attention followed, attempting to discover the name of unknown creator and activist. After acquiring his identity from the shop owners of Supreme Memorials in Brooklyn, where the gravestone was made, Whiteley was visited by the Secret Service.

In his practice at-large, the artist uses objects, such as the gravestone, and performances to construct absurd and often grotesque environments in public space that disrupt consciousness, infiltrate reality, and parody cultural and political figures. In addition to ‘The Legacy Stone’ he is also the clown who ‘haunted’ the Greenwood Cemetery and the co-star of ‘Golden Showers: Sex Hex,’ a film which caricatures Trump and Sarah Palin and was dubbed “Armory Week’s most outrageous artwork.” Berlin Art Link spoke with Whiteley to discuss pro-Trump groups and their lack of artistic expression, the mainstreaming of racism and how he manipulates the media. 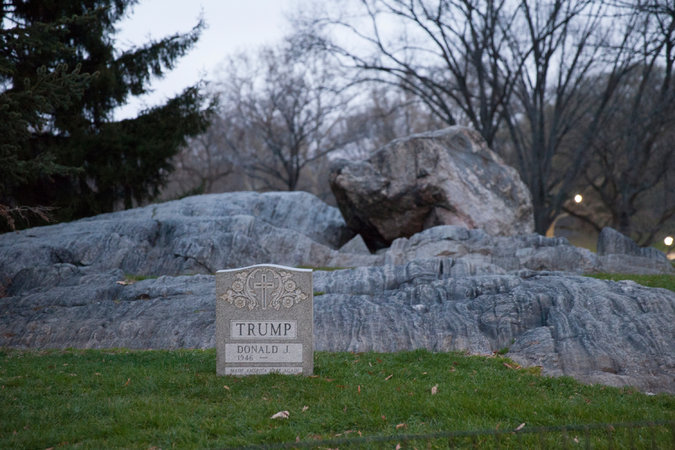 Jess Harrison: ‘The Legacy Stone’ was created when Donald Trump was a presidential candidate and only a threat to power. Do you believe that the work has taken on a new meaning now that he is President? When conceiving this piece did you ever believe that he would win the election?

Brian Whiteley: ‘The Legacy Stone’ has definitely taken on an even more powerful meaning now that Donald Trump is President. It is drastically more ominous and relevant, the epitaph “Made America Hate Again” still rings true. The concept for the piece was to foreshadow Donald Trump’s legacy, to provide him with a humbling visual, a way of forcing self-reflection. The hope was that perhaps this statement would effect change in him in some fashion; unfortunately that has not happened. When I made the tombstone I knew that this man had a chance of winning. I have family members who voted for Trump, I visited the rural parts of the country and saw all the Trump signs.

JH: What do you think the response to ‘Legacy Stone’ reveals about the current political moment and the relationship between politics and art?

BW: What I didn’t expect from ‘The Legacy Stone’ project was to get interrogated by the Secret Service—that was a traumatic experience. I had to release my mental health records, was fingerprinted, photographed and am now on a “Secret Service Watch List.” I think the interrogation speaks to the heightened state of anxiety on display in the US right now.

I have this theory that people on the right are simply less able to express themselves in an artful or therapeutic way, and thus are more frustrated and susceptible to anger and autocratic/dictatorial leaders. When I made ‘The Legacy Stone’ I received hundreds of death threats from right wing fanatics, and all I could think to myself was, why don’t you go out and express your first amendment right? Where is all the pro-Trump art? You just don’t see a lot of republicans/conservatives creating art, going to the theatre, to the opera, to the museum… You have to ask yourself why, and what effect does that have on a person? To me, culture and connectivity are cornerstones of tolerance, understanding and enlightenment. It seems we’re at a tipping point between progress and regressive tendencies and it’s a truly scary time. 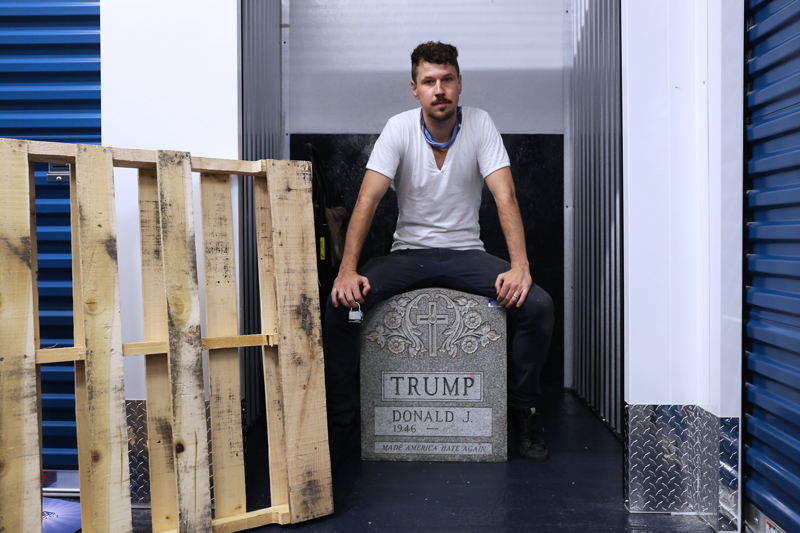 JH: ‘Legacy Stone’ was exhibited at the Christopher Stout Gallery, a not-for-profit contemporary art space, which often “shows subversive and difficult work.” Would you ever consider showing it in an art institution? What do you think is the relationship between protest art and the institution?

BW: Prior to Trump’s election I had several offers from museums asking to acquire the artwork, and once Trump was elected they all backed off. I think this piece will have a life at an institution down the road, but at the moment it is way to controversial. Institutions tend to only show political works in retrospect, which I can understand from a funding perspective, but can’t understand from a social and public need perspective. This coming year I am focusing on bringing the tombstone to the Midwest, otherwise known as “Trump Land.” The first stop will be at Duet Gallery in St. Louis in June. I think it’s important to show the work outside of the liberal bubble. It has already been shown at The Baltimore Museum of Art, The Boston Arts Center and Joshua Liner Gallery in Chelsea, and it is now time to bring the message to the front lines.

JH: Many of your works, such as ‘Greenwood Cemetery Clown’ and ‘The Legacy Stone,’ overtly deal with questions of mortality. Why are issues of life and death of such interest to you and in what role do you see yourself when mediating between these two polarities?

BW: One of the most humbling and terrifying concepts that you have to come to terms with in life is the idea of your own mortality. It’s something we all carry with us in various ways. I personally have a persistent and overwhelming anxiety about death that I’ve tried to deal with in different ways. I’ve found that confronting the anxiety through art can be cathartic and a temporary reprieve. These projects resonate with such power because of the universality the theme of “life and death” brings up in us all. There is an inherent need to investigate and understand the works, as we are all trying each day to comprehend our reality. I have never shied away from pushing the boundaries and being bold—to me that is where all the interesting work finds life and longevity. 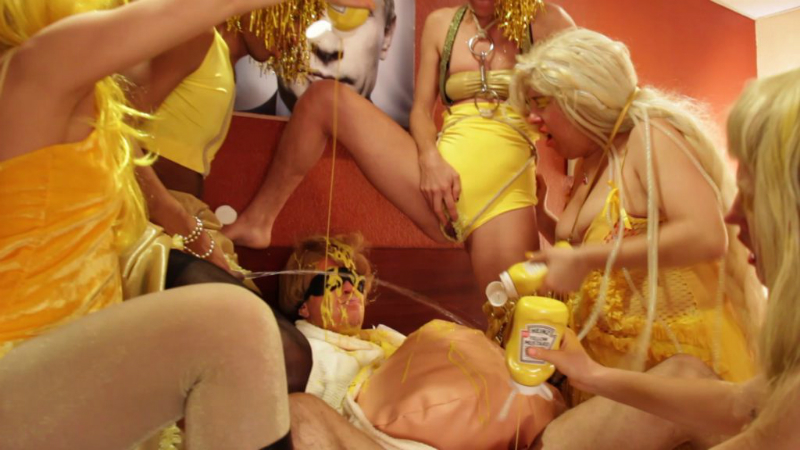 JH: There is an element of mystery in your artistic identity, as you always initially remain nameless and then there seems to be some big media reveal. Is this anonymity for something like safety reasons or something which you feel contributes to the meaning and impact of your art?

BW: In the Greenwood Cemetery Clown, Chicago Cemetery Clown, Bigfoot Hoaxes and Trump Tombstone projects, the works were done anonymously and were widely covered by the media, allowing a wider audience outside of the art world to be susceptible to the work. This is the main goal of my public works, to find ways to infiltrate the public conscious, to allow a moment to question the world around you. There is a now a widely thought belief that a clown is haunting cemeteries in Brooklyn and Chicago, that Bigfoot may be living in Prospect Park. It’s all about developing public narratives and creating new myths and stories that break from the known reality.

JH: Your works are often described as publicity stunts. How do you respond to this categorization?

BW: I’d argue otherwise, but I understand the mischaracterization and am happy to have different people chime in with their opinion. I do know that a lot of my projects are divisive and controversial, which brings a lot of points of view to the table. I am also very aware of the “shock” element that some of my projects embody. I see myself as an artist of the times, an artist who isn’t afraid to embrace the absurd, the morbid, the controversial. I was creating “Fake News” long before it was weaponized by the Russians and popularized by Donald Trump. I remember having Jerry Saltz in my studio and showing him a video piece entitled ‘Escape’ in which I was handcuffed in a thong running through the streets of NYC. He said “I love it, but be cautious of one thing,” and I said “what’s that?” He replied, “’Jack Ass’ the TV Show.” That was a pretty succinct analysis of that work and my projects in general. He brought up a good point: The content is great, but you need to find a way to proliferate the material in a thoughtful and intriguing manner. As of now, I think I have been lucky in being successful in that endeavour. 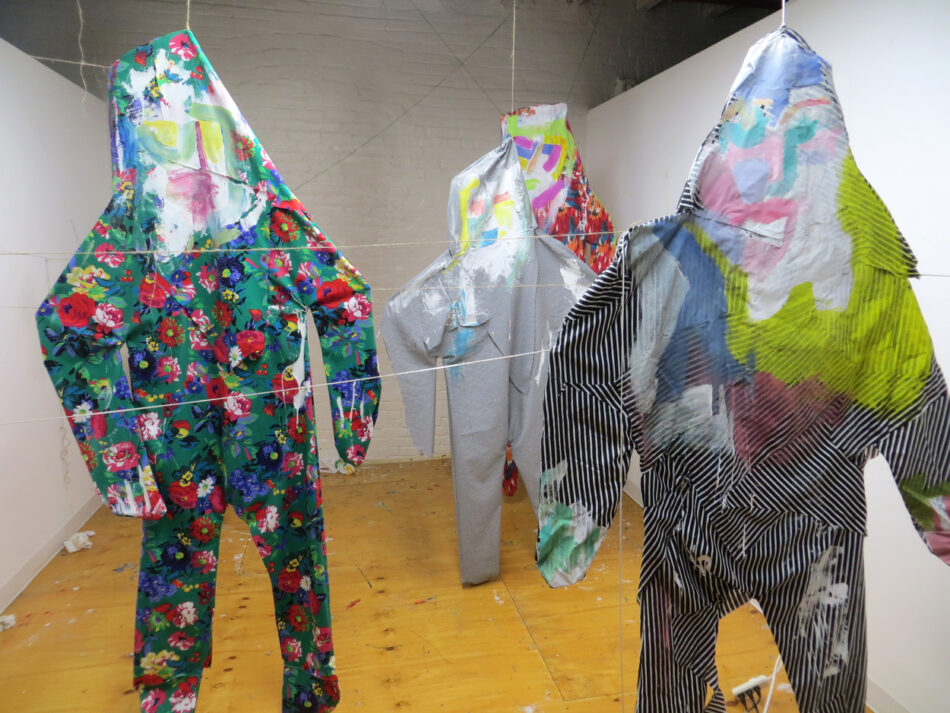 JH: Modern day hate groups are marking their separation from past white nationalists by adopting a uniform which removes anonymity and resembles normal clothing. Could you discuss your work ‘Domestic Terrorism Costumes’ and the link between alt-right nationalism and costume?

BW: The United States has seen a major normalization and militarization of racism and supremacy over the past eight or nine years. Basically starting with the Obama Presidency, you saw extremism on the rise, which culminated in the election of Donald Trump. Over those years you saw the characteristic, country “redneck” racist transform into a white collar, college educated, polished version of the KKK/Neo-Nazi movement. They call themselves the Alt-Right, which is a group that is mainstreaming racism using carefully crafted language and dog whistles to popularize abhorrent beliefs (Breitbart News and Milo Yiannopoulos, Richard Spencer, Steve Bannon, etc.). My ‘Domestic Terrorism Costumes’ comment on the simple transition from KKK cloak to everyday wear that thinly veils the supremacists today. They are reminiscent of the traditional KKK cloaks but are made from modern and designer fabrics purchased in Manhattan’s garment district. They are life-size, wearable sculptures, so they have an inherent energy and options for usage and potentiality.

JH: How do you think you use performance and art objects to address the media?

BW: I think my biggest success has been getting the media to cover performance art and guerrilla works of art without them knowing they were doing so. It’s incredibly difficult to get mainstream media to cover art, so the visibility and subversive nature of my work getting mainstreamed is fantastic for myself and I’d argue for the public at-large as well. 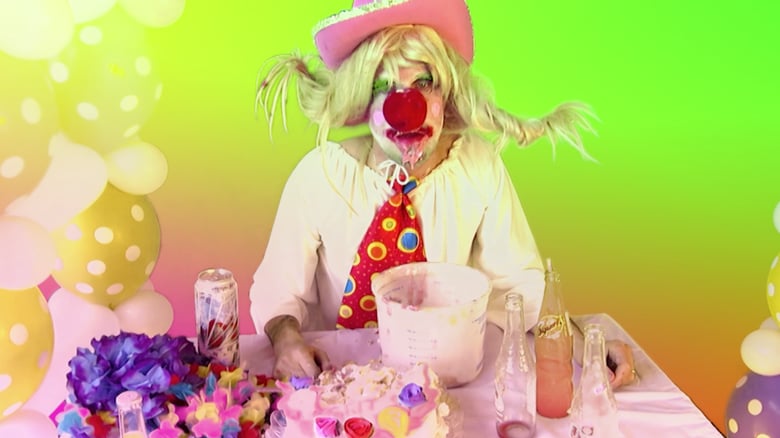 JH: Trump’s presidency has given nationalism a new confidence and nationalistic sentiments are being increasingly and more explicitly employed in his speeches. How do you think artists and the public should meet such rising and dangerous rhetoric?

BW: I think the more he pushes to raise the voice of nationalism, we must stand up for the true values of the United States and speak out. Artists have a particularly fantastic way of expressing themselves and it perplexes the opposition and unifies the resistance. I would also encourage artists to invest time in learning their rights so they can work safely within the parameters provided; this was the biggest lesson I learned from executing ‘The Legacy Stone’. I worked with renowned civil rights lawyer Ron Kuby, who advised me on my rights and provided guidelines on how to accomplish the work without putting myself in serious risk.