From the moment the audience enters the studio space at Tanzfabrik for the performance ‘Now and Then’, they are made acutely aware of time. Two performers, Christina Ciupke and Jasna L. Vinovrski, dressed in boiler suits meditatively lay sheets of blank A4 office paper to form a huge rectangle on the ground; they are in the painstaking process of setting the stage for a performance that already began half an hour before. The piece is part of Tanzfabrik’s Open Spaces #1-2018 program and marks the first collaboration between Ciupke and Vinovrski. It addresses temporal perceptions through subtly referencing the period when independent dance originated, as well as their own choreographic histories. 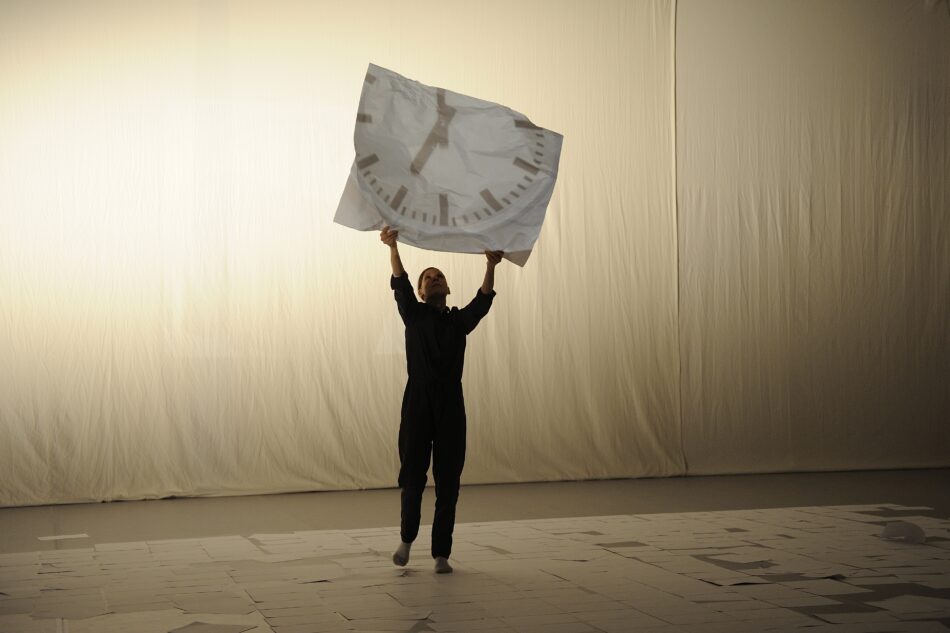 As the partial paper rectangle gradually becomes completed, a recording of the performers voices describing a photograph is played over their durational movement. They give an overview of a group scene, before focusing in on details of individuals’ costumes and the materiality of the photograph itself. In their attempt to pinpoint the image’s place in time, a wider notion of history is introduced into the space that opens it up to different temporalities, both past and present. In this way the performance effectively evokes traditional spoken and written methods of imparting histories, which are then complicated by the presence of the body. 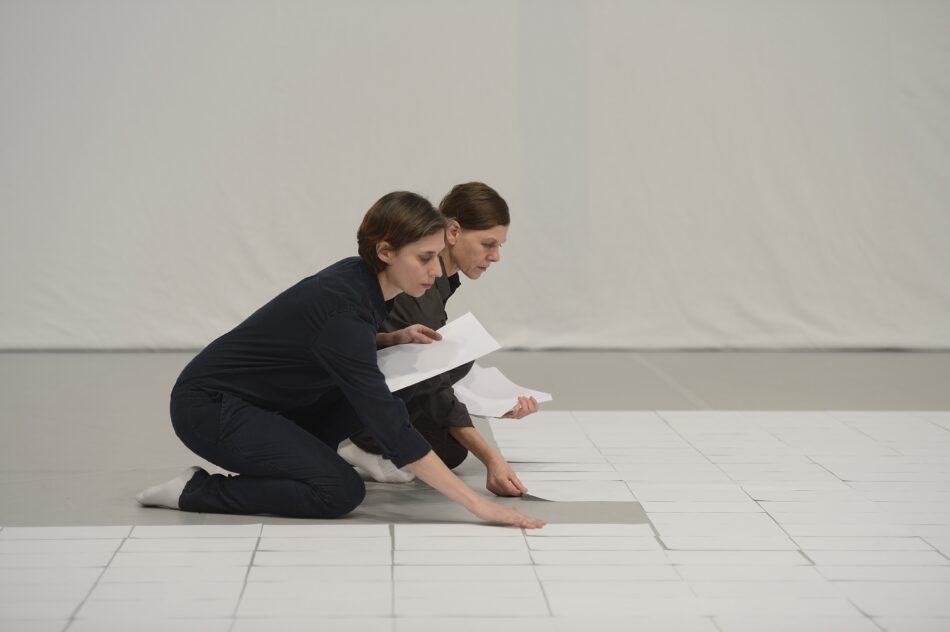 Once the recording has ended Ciupke and Vinovrski begin to move upon and, inevitably, disrupt the paper stage in the process of passing a large, crumpled sheet of paper between them. Holding it above their heads and allowing it to fold slowly and mesmerizingly of its own accord, the paper becomes a dancer and the performers simply the facilitators of its movement. It is both a vessel for the image of time, an intermittent projection of a clock face, and a blank space upon which the audience can project their own associations; in the moment the paper touches the sides of the studio, it becomes the collectively imagined photograph that we have been told once hung upon a wall. 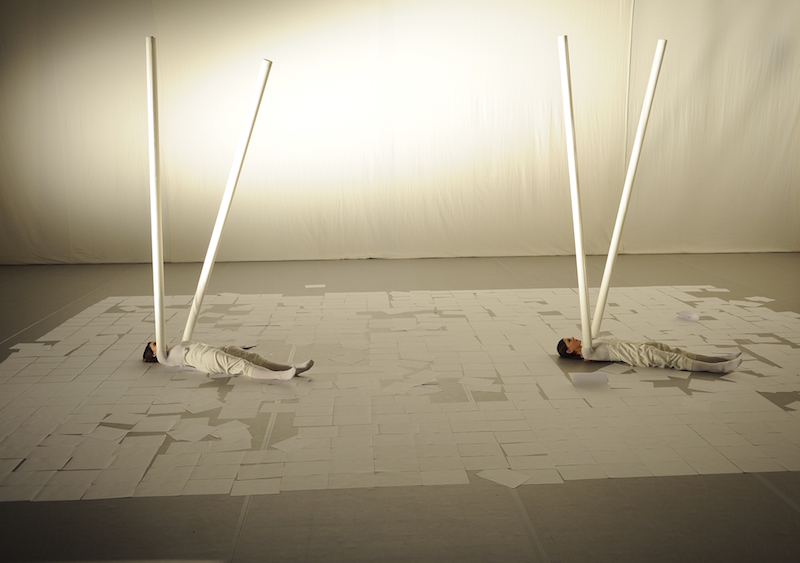 Towards the end of the performance the dancers finally shift from working with time as an object to physically embodying it. This is signalled by a costume change into white fencing outfits and the placement of long paper rolls on their arms as a surreal extension of the body, in the lineage of Rebecca Horn. Lying on the ground and rotating their arms, they appear to be a three-dimensional version of the clock hands from the earlier projected image. These props are then used to perform the robotic, repetitive gesture of moving leftover stacks of paper between them to no clear purpose; a movement that leaves room for both abstract and specific references to the machine, and the emergence of the role of the clerk in the early 20th century – and circularly links back to the bureaucratic A4 sheets from the beginning of the performance.

This sustained use of blank paper throughout ‘Now and Then’ serves not only as an enjoyably minimal aesthetic but, paradoxically, allows space for increasingly rich and diverse associations to be made. Ciupke and Vinovrski’s stated interest in “gaps and missing information in the historical context” is therefore key to the performance; it reveals history as an imperfect narrative that, like the paper stage so carefully made, can be quickly and chaotically undone.