Chicago-based artist Michael Rakowitz uses his practice to explore the nuanced and often convoluted ways in which people and nations interact with one another. He deals with the complexities of social, political and cultural identity in contemporary society, often drawing upon his background of growing up with an Iraqi-Jewish mother and an American father. In ‘Backstroke of the West,’ the artist’s first major museum exhibition currently on view at the Museum of Contemporary Art Chicago, Rakowitz presents a series of conceptual exercises in which blessings are curses in disguise and hospitality is nothing more than a veil for underlying hostilities. 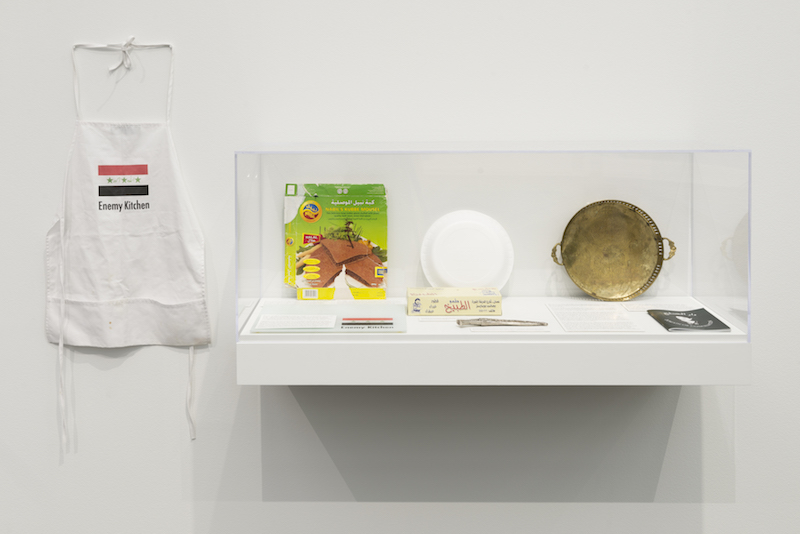 Food plays an interesting role in Rakowitz’s work, existing as a symbol for hospitality, while also carrying an intricate history of trade, travel and economic motives. Whether we bless food before eating it, share it as a peace offering or metaphorically break bread with friends and enemies alike, we traditionally characterize food as an emblem of national and cultural identity, as well as a means for coming together. In today’s environment, however, where policed borders, cultural exchange, outsourced labor and politically charged sanctions have become the norm, food has taken a much more complicated shape, as seen throughout ‘Backstroke of the West.’

Where did your food come from? How far did it have to travel to get to your plate? If products could speak, what stories would they have to tell? These are the questions at the core of many works in the exhibition, including ‘May The Arrogant Not Prevail,’ a replica of ancient Babylon‘s towering Ishtar Gate, which Rakowitz transforms into a vision of glorified trash. Made entirely of recycled Arabic newspapers and food products, the structure is held together by the ubiquitous Western logos of Pepsi and Lipton—no doubt an allusion to the fact that the original gate is now housed in Berlin’s Pergamon Museum. In their dominating repetition, the brands surpass their functions as popular beverages, opening up debates surrounding the ownership and display of looted historical objects and landmarks; they serve as manifestations of the economic power struggles that are continuously at play in the Middle East. 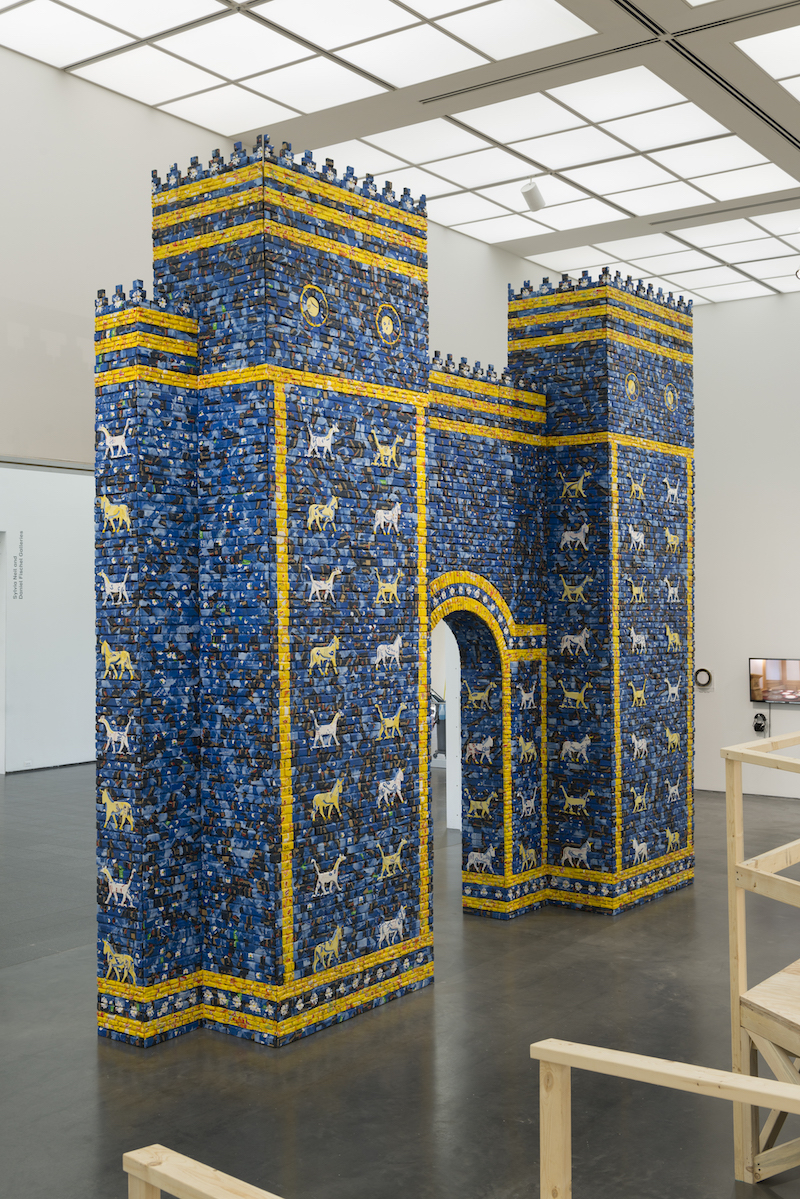 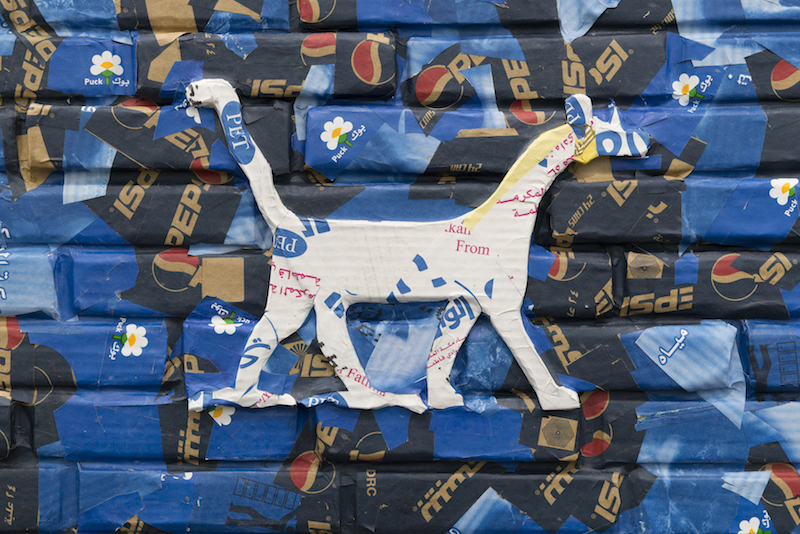 Delving deeper into these power dynamics is ‘Enemy Kitchen,’ an ongoing project that began in 2003 as a cooking workshop in New York City and was reactivated last October as a culinary intervention in the form of a food truck stationed in front of the MCA. Using Rakowitz’s personal family recipes, chefs from the museum’s restaurant cooked up a storm, while American veterans of the Iraq War served the dishes on paper replicas of Saddam Hussein‘s china plates. Rakowitz used the original plates, which he purchased on eBay, in his 2011 culinary intervention ‘Spoils,’ but afterward was asked to return the plates to the Iraqi embassy. A video recounting the surreal experience is now part of ‘Backstroke of the West.’

Beyond a relatively harmless social experiment, ‘Enemy Kitchen’ harkens to a larger societal phenomenon of attributing cultural, political and economic significance to that which we consume. In the same way that a food product might reflect a certain country’s wrongdoings, perhaps our consumerist decisions belie subtle attempts at political action, or lack thereof. Rakowitz thus challenges conventional methods of discussing foreign policy, welcoming discomfort in his viewers without forcing any standpoint upon them. The only problem is that this experimental approach renders his work nearly impossible to display in a traditional setting. Performative pieces like ‘Enemy Kitchen’ and ‘Spoils’ require focused attention from museum-goers and when placed within the same space as Rakowitz’s static works, they end up losing that unique quality. This loss, among others in the exhibition, highlights an ongoing concern about how we should display ephemeral artworks. 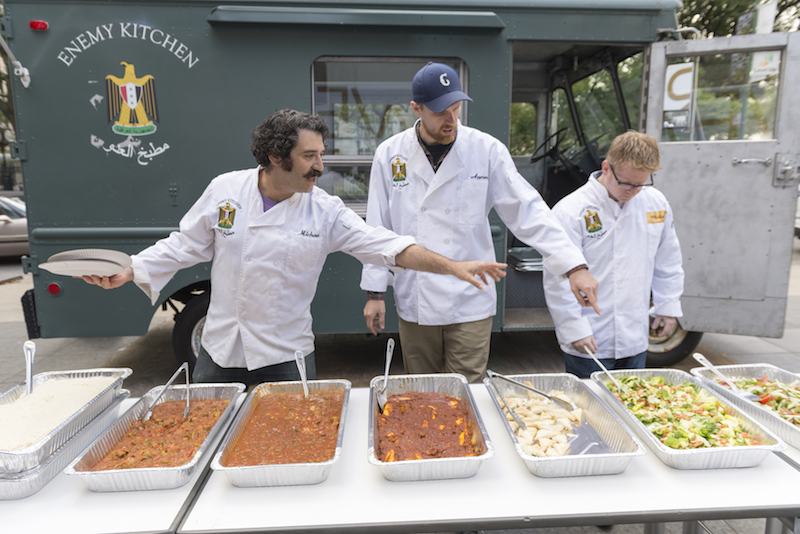 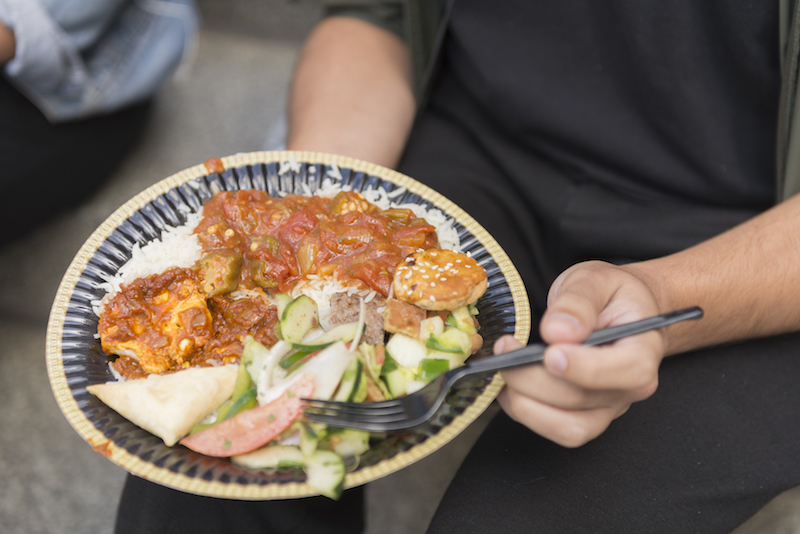 Take a project like ‘Return’, for example, which began with Rakowitz reopening his Iraqi grandfather’s import and export company, Davisons & Co., in 2004: There is an elaborate backstory to the work, but all that we see of it in ‘Backstroke of the West’ is a vitrine of relevant artifacts, including cans of Iraqi dates that were packaged in Lebanon as a way to circumvent UN sanctions. The participative aura of the project has been lost somewhere along the way and it is unfortunate that the aesthetic display of these objects is not particularly alluring. If viewers take the time to truly study Rakowitz’s work or attend an intervention, they will find a clever individual who has found endlessly creative ways to demonstrate that products carry the complexities of their origins and serve as a constant reminder that you are, indeed, what you eat.