Khaled Hafez’s huge canvases are abstract playgrounds where ancient gods, glossy magazine bodies and comic superheroes meld together and take part in a rewritten narrative. In his multimedia practice, Hafez extracts imagery from the cultural arsenal of his native Egypt as well as from the deluge of global mass media and pop culture to create paintings, films and installations that reflect both contemporary Egypt and a universal experience of a universal culture. Hafez’s practice defies a simple linear or geographical sense of identification, while also drawing from personal memories and moments in history. Playful and ironic figures, such as Batman with the head of Anubis, are starkly contrasted to painted silhouetted snipers and video footage of urban decay in Cairo.

In his current exhibition ‘Realms of the Hyperreal’, at Nome gallery in Berlin, the notion of recycling—of images, icons and references—runs across the various mediums. Along with his bright and hectic collage paintings, video and installation make up a rich web of cultural referential markers. Bronze castings in vitrines stand in for objects representing personal memories and histories, as well as weapons and symbolic tools of oppression. Berlin Art Link met with Hafez before the show to talk about cultural identity and the local and global contexts that inform his practice.

April Dell: The title of this exhibition refers to the postmodernist theory of hyperreality. Is this a guiding principle or main preoccupation in your work?

Khaled Hafez: I’ve been obsessed with Jean Baudrillard for a while. His texts are complex; with every translation they come up with a different meaning. In his seminal text, ‘Simulacra and Simulacrum’, he addresses several layers of what is authentic and what is copied, what is fake and what is true. When you take a photograph of a war zone it has its own aesthetics. The picture depicts a scene or a frozen moment in time, but it has its own reality because it does not smell, it does not make sound, it does not simulate the fear of everybody inside. So eventually it only represents itself, it does not represent what has happened. Art has always been a simulation of something, it has never been the real thing. There is this process of recycling. A picture is of something that simulates something, that is probably perceived in different ways. Reality always has two faces. In my work, I always say that the beauty of creating canvases or films has nothing to do with reality, but actually you take elements from the real and make them play with each other. 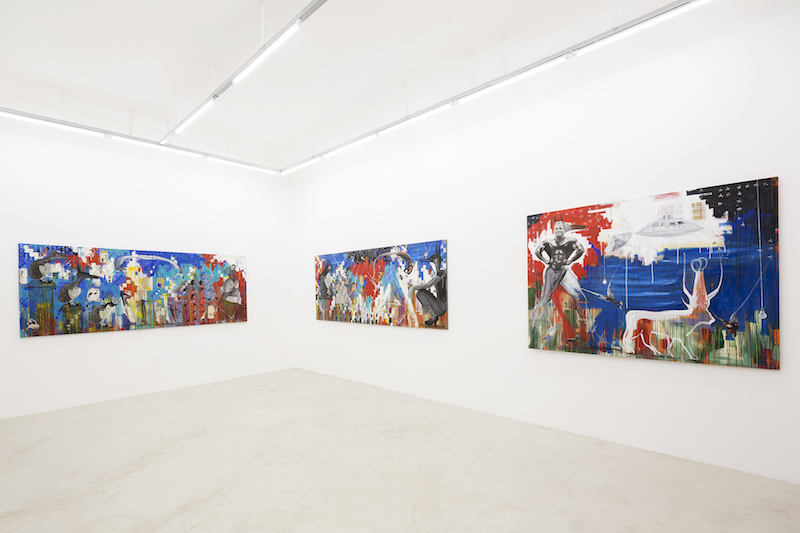 AD: Your works, particularly the paintings, recycle a lot of imagery from global mass culture. How are they also informed by personal experiences and your own sense of belonging?

KH: Belonging is a big word. Yes, I’m rooted in Egypt, but Paris changed my life. I have no idea if this is possible or not, that one’s soul or spirit can live in more than one place. I’ve had several affairs with several cities. However, belonging is by default. In psychology we say that monogamy is a myth and, well, it’s the same thing: belonging is a myth. It’s an emotional construct we attach to a studio or an apartment or a soccer field or a country. But in my painting or in my film, I reference Egypt a lot because I grew up there. Decoding the ancient Egyptian wall has been an obsession almost. It is super interesting because it tells stories and in my work as an artist, I’m a storyteller. The type of art I do is storytelling.

The interesting thing about this universal global world is that this is an exhibition by an Egyptian artist who is also a French artist by citizenship, and then I’m working with an Italian gallery in Berlin and I’m being interviewed by you from New Zealand. This means something. I’m obsessed with this notion of Egyptian identity: Am I African? And I Middle Eastern? Am I Arab? Am I Judeo-Christian? Am I Arab Islamic? Am I Mediterranean? Or am I all of the above? I think it’s always all of the above. I call that the Egyptian notion of the Big Mac theory; when you put all those layers together, it’s a cumulative experience. 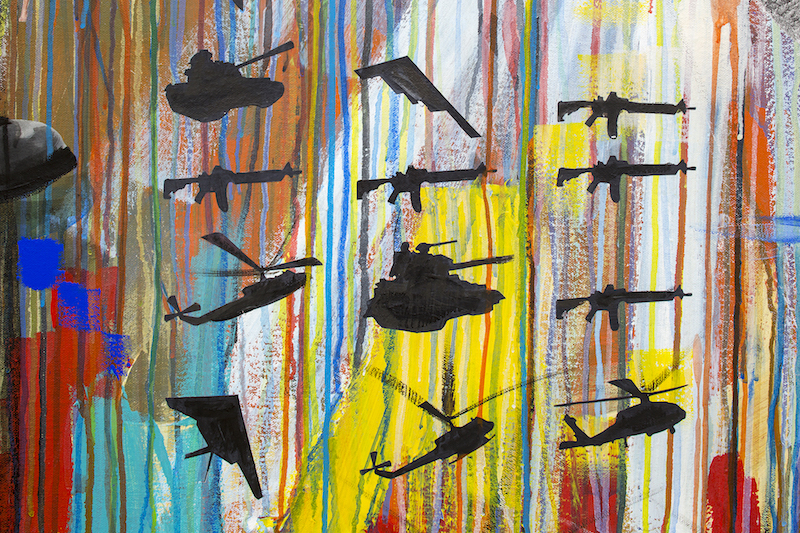 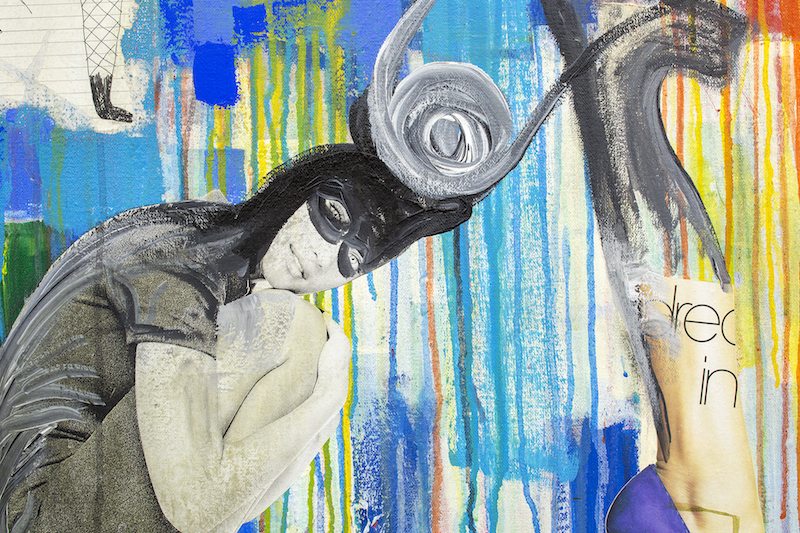 AD: You’ve written that your image making is a probing of distance and time. The figures in your paintings appear dislocated in time and place, they’re collaged onto abstract backgrounds where icons of the ancient past and the present merge and interact. To me, they could be describing a collective consciousness for contemporary Egypt. Is this an aim of these works?

I’m talking again about the hyperreal. Every single canvas or every single film has its own time and space, it should represent itself and is its own reality. Yet, there is always a kidnapping effect. When people get awed by a piece of art it is this kidnapping effect. I think that the time and space of that particular entity talks to someone and is capable of having its own gravity. There is definitely this energy that flows from it and kidnaps it from its context.

AD: Do you see yourself as part of a group of Egyptian contemporary artists who share similar subjects and approaches?

KH: I guess we are subjected to certain circumstances that are inflicted on all of us. We just assimilate and interpret in our own way. Politics plays a part, economy plays a part and the culture itself plays a part. Egypt, and the Middle East as a whole, is a high-context culture in which a move or a gesture or a word can mean one or two or three things. In low-context cultures, like Germany, if you want to say something you say it in one single phrase and what you say is what you mean. That’s not the case where I come from, so I try to work with these levels of meaning in my practice. Censorship has a lot to do with that.

Egyptian artists in the twentieth century could not address the three taboos: sex, religion and politics. If you talked about these, you were in deep trouble. Trouble could be anything from being banned from your practice or making life tighter around you, or if the type of art you practice can move people then you can even serve a sentence. Eventually, Egyptian artists started to move around authority and censorship and code different layers of meaning in their work. With the use of the high-context culture in which they come from, they could insinuate, hide or imply something with the proper dose that would not cause the artist trouble. 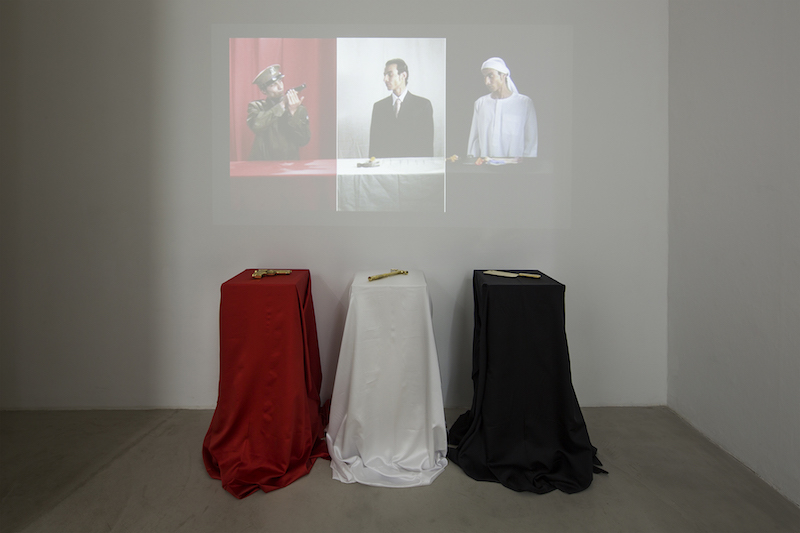 AD: Your work has a strong sense of irony, for instance your amalgamated figures that merge fashion models and bodybuilders with Ancient Egyptian gods. Why did you chose this mechanism?

KH: Irony is the language I speak naturally. Some artists are serious and it works for them. It’s like the difference between the acting of Richard Burton and Al Pacino. They’re both great, but Al Pacino cannot be serious like Richard Burton can. Irony helps me to say whatever I want. In fact, it’s a shield. It’s a tool to avoid censorship.

AD: Do you think questions of cultural identity are a fixation of contemporary artists facing a globally connected world with a global mass culture?

KH: Cultural identity is definitely big a subject to explore, especially with artists who move internationally, and I’m lucky to be one of about eight artists from Egypt who move internationally a lot. In Egypt, in the late 50s and 60s, it was a huge working terrain. But then it was very close to socialist realism, in that you would have to talk about the motherland, the mother nation. Cultural identity was moving around anti-imperialism. Today it’s different. Today is the age of individualism in which every artist explores their own personal language and the audiences are more receptive to personal exploration. To try to understand what it is to be Egyptian or what it is to come from where we come from. Are we different or are human beings identical? Is ideology enough to separate people? It certainly affects all of our practices. 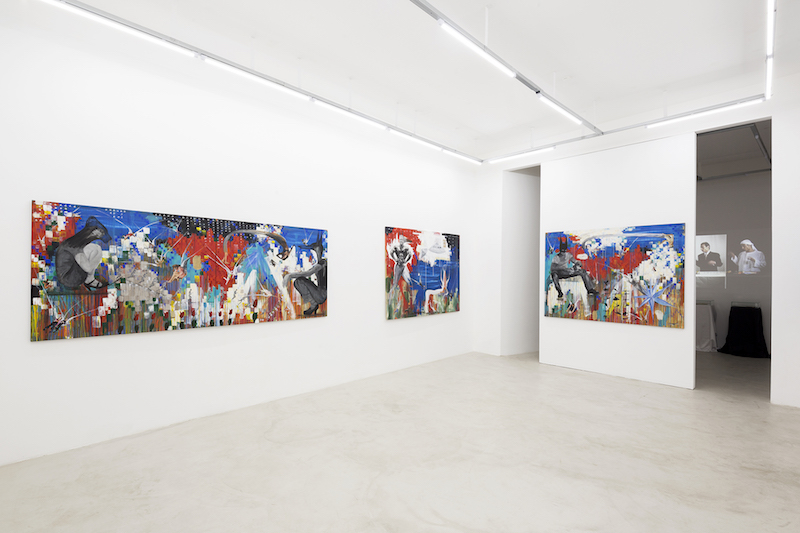 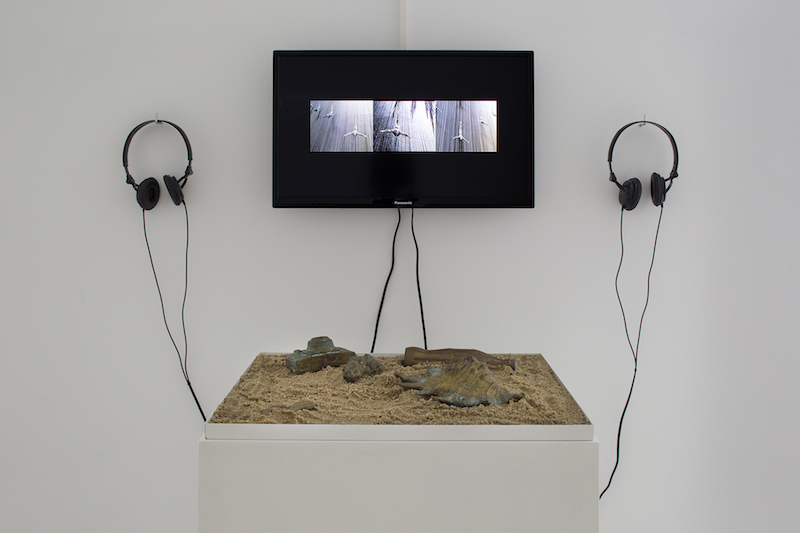 AD: Your work also brings to attention the East and West divide. Mass media and consumer culture cross this divide, but other enduring conditions, such as nationalism and fundamentalism, entrench it. Where do you see the role of the artist here?

KH: I think the role of an artist can be anywhere between a scientist and a priest. The artist is someone who can propose questions, not answers. If you start to propose solutions, you become a politician. Nature is based in selectivity not democracy, so an artist cannot stop the lion from eating a gazelle. An artist will never be able to stop war or convince Donald Trump to shut up. I try to break this barrier between East and West, between past and present, and certainly between what is sacred and what is ephemeral and consumable.

AD: How do you interpret the rise of Arab and Middle Eastern art on the global stage?

KH: 9/11 was definitely a major moment for Arab artists. Sane voices in the West—curators, journalists, writers, art practitioners—said, “Hey it cannot be 100 percent evil coming from over there. There must something else.” So from 2002 projects started to happen. In the Middle East, curators and historians started to come over to see what was going on. So after 9/11 there was definitely a rise, but then, it’s like what Andy Warhol said, you have 15 minutes of fame, then the light will go away, and the light went away. A few of us were still on the international scene, and then we had another 15 minutes with the events of 2011, the Arab Spring.