In one of Nicole Wermers’ most recognized series of work, ‘Untitled Chairs’, fur coats obscure the backs of cushioned metal-frame chairs. In another series, ‘Abwaschskulptur (Dishwashing Sculpture)’, decorative dishware, china plates, silver platters and more are crammed into dish racks. In the series ‘Mood boards’, colored terrazzo fills the space where a baby would lay within a diaper changing station-the kind found in public restrooms. In these works, and throughout her practice at large, Wermers confronts the ideas of public and private space. She freezes momentary public occurrences, such as draping one’s coat over a chair to save a seat in a café, and thinks about social structures, as seen in the disparate elements delicately balanced in dish dryers. 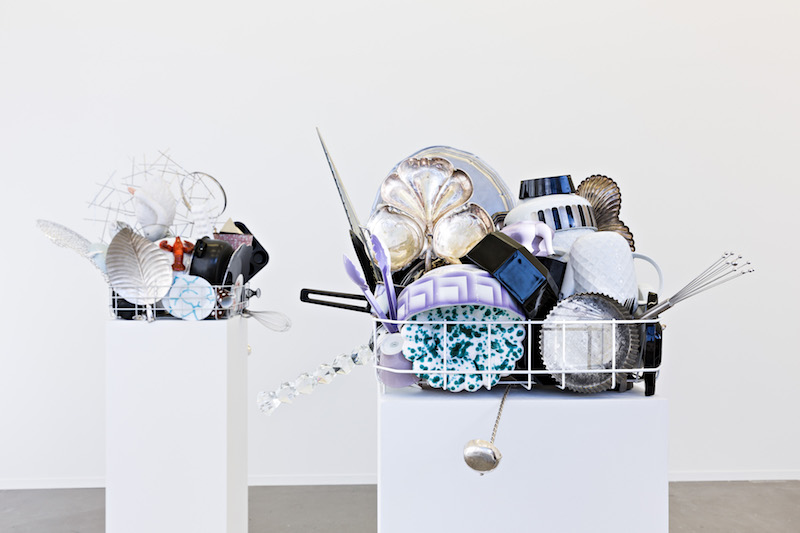 Born in Emsdetten, Germany, Wermers now lives and works in London. Although she’s exhibited at renowned locations like the Tate Britain and Camden Arts Centre and was nominated for the Turner Prize in 2015, it isn’t until now that she’s had a solo exhibition in her home country. Currently on view at the Kunstverein in Hamburg, Wermers show ‘Women Between Buildings’ presents an overview of her practice: from the aforementioned chair sculptures and dish racks to photographs from her ‘Croissants and Architecture’ series as well as simple, geometric sculptures representing vertical awnings. Shortly after the show’s opening, Wermers told us about her thoughts on aesthetic manipulation in public space and how she increasingly sees private space as a luxury.

Nicole Wermers: The way our surroundings are designed has always had a strong impact on us. We react to surfaces, shapes and spaces, which have been designed with certain strategies in mind and can manipulate us. Motives and strategies to do this have evolved over time and their means become ever more finely tuned and subtle. Some pre-industrial forms of aesthetics were ways of gaining social control by means of design, as in, for instance, awe-inspiring church architecture. With the rise of a middle class and the need to create and diversify products in order to turn profits large enough to support a capitalist economy, the objectives have somewhat widened and an ever-increasing amount of resources are going into the design and surroundings of products.

What I think is interesting now is how our perception has adapted to the speed and volume of the visual information we are constantly confronted with. Materials, surfaces, shapes and their reproductions lead almost instantly to the moods and values we are conditioned to experience. What used to take a more elaborate and often three-dimensional narrative to drive the point home can now be triggered by an image in a split second. In the absence of materiality and with the increased rate of image recycling in our internet culture, our desires become fixated on surface aesthetics as quick and easy stand-ins for notions of class, taste and identity. 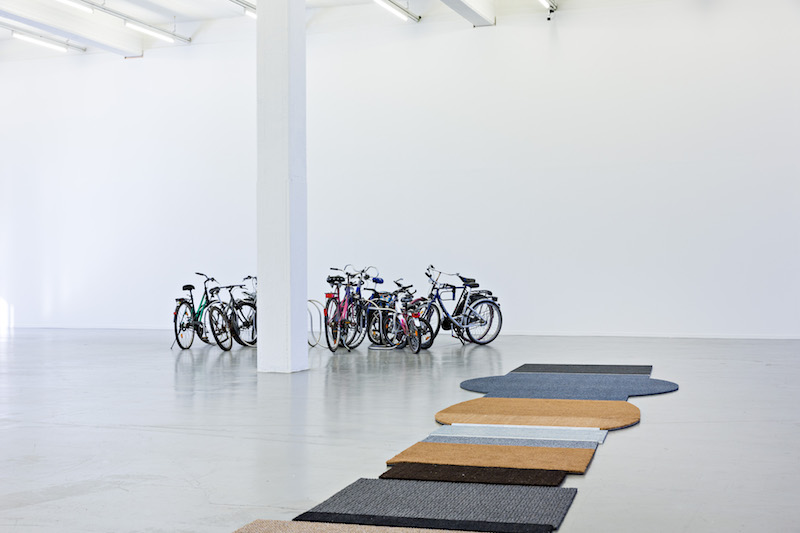 EM: Your sculptures and photographs often deal with notions of public vs. private spaces. Can you tell me about how you first become interested in this dichotomy and what keeps you continuously interested in it?

NW: I have always been quite interested in how space is allocated, divided and what materials and rituals are involved, as well as in the notion of trespassing. I don’t really remember how that started. ‘Palisades’, a video from 1998, shows an upside-down camera ride that alludes to someone walking on the ceilings of several semi-public buildings—public spaces that one has to pay to access, like hotel corridors, lobbies and convention centers. It is about the appropriation of space, in this case the unclaimed ceilings, but also a way of regaining access. In order to film in these places, I was trespassing; I had to pretend I was a hotel guest or worked there.

I am quite interested in the space between the private and public realm, the thresholds where pedestrians turn into consumers or clients. For example, my series of sculptures ‘Untitled Forcefields’ reference the security gates at the exit of department stores which act as markers for that threshold. However, we are of course increasingly experiencing the elimination of the categories of private and public space; everything is private and public at the same time now and we are consumers almost wherever we are. 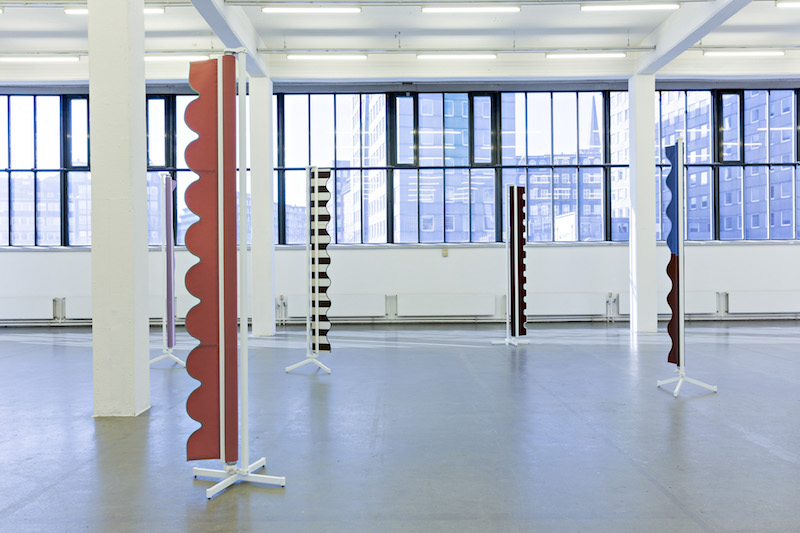 EM: Yeah, much of what was once private has become ubiquitously public through modern communication, like social media and blogging. In what ways have you seen the public vs. private shift during your time as a practicing artist?

NW: I am mostly interested in the spatial aspect of the public/private issue and of course it’s a pretty absurd world out there today. There’s an ever-decreasing amount of public space—at least of the kind that is not commodified—on one side and on the other, people are sitting in their private screen-bubbles in public cafes and co-working spaces sharing their privates lives online. Private and public spheres are increasingly merging in different layers of reality and space is now something that a lot of people experience mainly behind the screen. This of course has an effect on how the world outside looks. The surface qualities—or lack thereof—of lot of materials currently used in architecture indicate that our cities are starting to look more like digital planning stages.

EM: So how has your artistic practice adapted to these societal shifts?

NW: I think I have become more interested in juxtaposing as well as merging or amalgamating separate objects and spheres. But I also think I feel a certain nostalgia for the old concept of urban public environments, which creeps into my work and is something that I am not yet sure how to feel about. The ‘Mood boards’, a series of wall-based adapted readymades, for example, are misappropriated, foldable, diaper changing tables from public toilets. They create practical surfaces in close quarters to perform an intimate ritual, but I filled them with different colored terrazzo, the rough kind you find in traditional Italian cafes and bars. Both are elements of public space, but their aesthetics follow different trajectories. While the baby changing units follow contemporary norms of safety standards and hygiene, terrazzo is characterized by notions of improvisation and coincidence. Yet the resulting unruly patterns hide dirt and heavy use, which makes them perfect for the public realm. 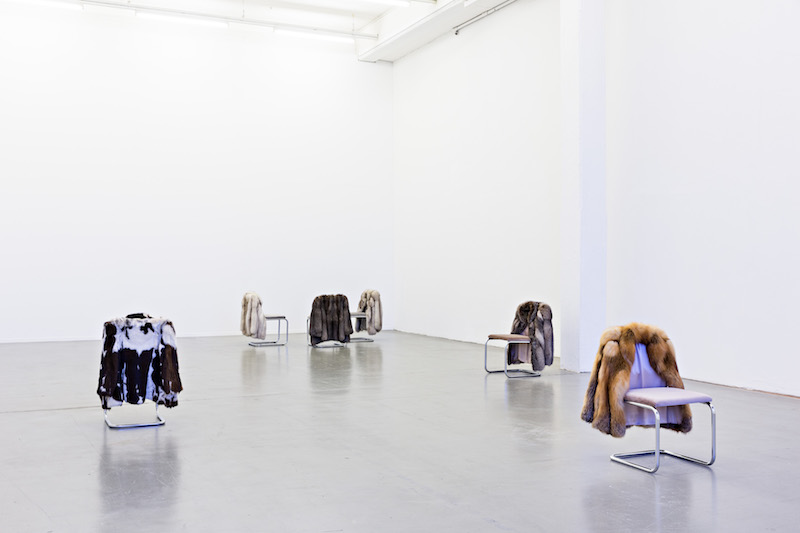 NW: I think that private space becomes increasingly a privilege of those who can afford it. Everyone without means will be damned to be a consumer at all times. I also think that a certain degree of wealth gives you access to a world that doesn’t necessarily subscribe to the current contemporary aesthetics of the built environment consisting of surfaces without depth, which look more and more like their digital counterparts. In London and New York, for instance, there has been an accelerating trend of new and refurbished luxury hotels, upscale restaurants and private member clubs that look like they have fallen out of time. They are designed to look like plush Edwardian mansions or are restored to pre-war glory. 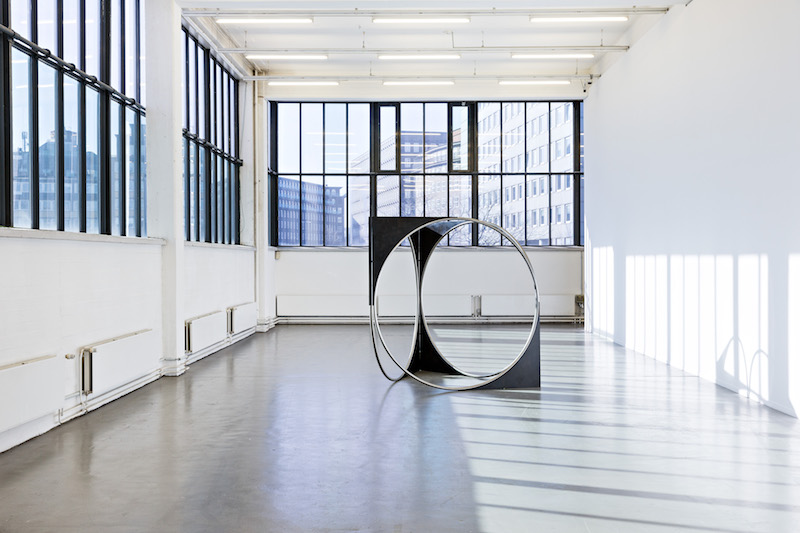 EM: I’m curious—can you explain your choice to use fur coats instead of more egalitarian coats in the untitled chair works?

NW: The fur coats are not so much used as a symbol for class here. Some of the jackets I used are rabbit and lamb, which can hardly be called upper class. I think the mass appeal of fashion has diluted the association between fur and social class. However, a fur coat was and still is something special and luxurious in a person’s wardrobe. My aim with these pieces was to turn the temporary ritual we perform in public space of occupying a chair with one’s coat into something permanent and merge two objects into one. I experimented with all kinds of coats, including puffer jackets, but the specific design of fur coats with their loose interior allowed me to hide the backrest of the chairs behind the lining. Also, the fur coats have far more presence than other jackets. They carry a such an elaborate narrative. The material combination of tubular steel and fur was common in advertisements for modernist furniture and is definitely a consumerist and aesthetic trigger.