At a glance Natalie Frank’s most recent work seems to follow in the tradition of Edgar Degas, both in her choice of subject matter and its subversion. The New York based artist’s 2017 exhibition at Rhona Hoffman Gallery was a portrait series of ballet dancers and dominatrices, titled ‘Dancers and Dominas’. By exhibiting these paintings alongside each other, she explored the juxtaposition of “high” and “low” art within a performance context and challenged the viewer’s perception of female identity, and such dualities do not exist harmoniously throughout Frank’s wider practice either; her works are too jarring. Visually, flat planes of paint contrast three dimensional, fleshy bodies while psychological, interior worlds rupture and interrupt the exterior surface. 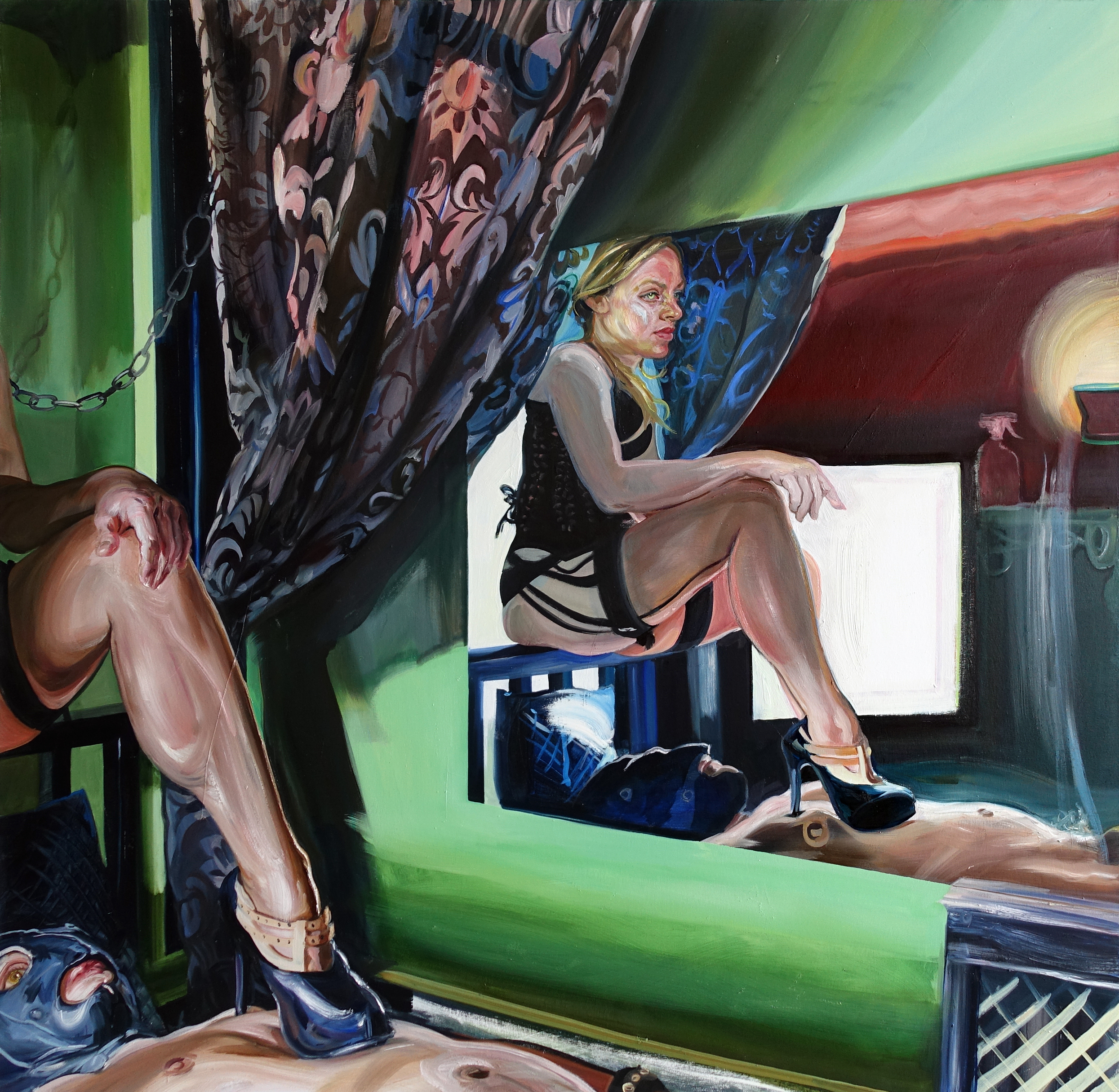 The influence of other past artists is also evident in her very painterly style. From the 20th century she conjures the distorted figures and flesh of Francis Bacon and Lucian Freud as well as back to the colours and compositions of old Venetian masters such as Veronese and Titian. However, this masculine lineage is dramatically undercut by Frank’s own concerns. The collage of different aesthetics is a device used to locate the female body in history, time and space. She depicts women’s bodies as strong and powerful in their femininity, reminiscent of Maria Lassnig and comparable to Jenny Saville, yet vulnerable within the scenarios she places them; this complex and ambiguous relationship between gender, sexuality, hierarchy, and patriarchy is a continuous thread that runs throughout her work. 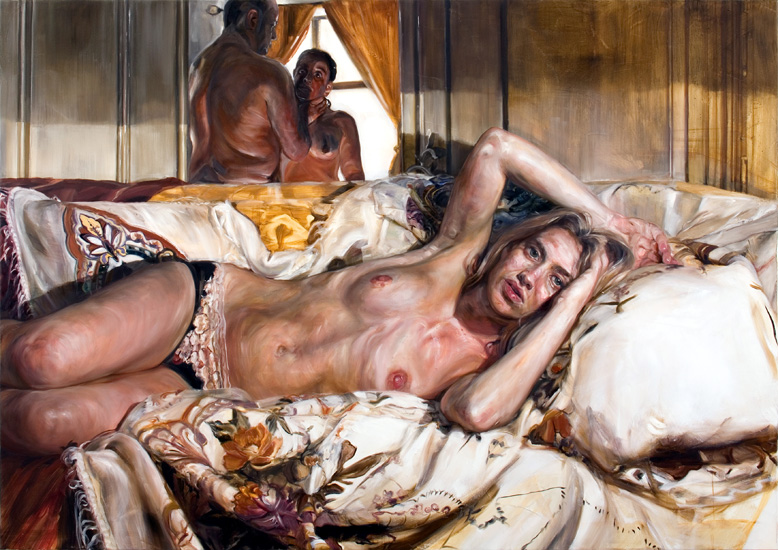 The often-decorative backgrounds of her paintings—plush with floral patterns and bordering-on kitsch interiors—are in sharp disparity to the scenes unfolding within, for example, acts of violence in ‘The Stammerer’ (2007) and ‘Exorcism’ (2012). Particularly in the current political and cultural climates, the contemporaneity and relevance of Frank’s seemingly traditional practice is felt viscerally. A critique lurks beneath her paintings’ surfaces, which themselves are apt allegories for today’s gender politics. Another uneasy opposition is then experienced when looking at her work: one of simultaneous attraction and revulsion. 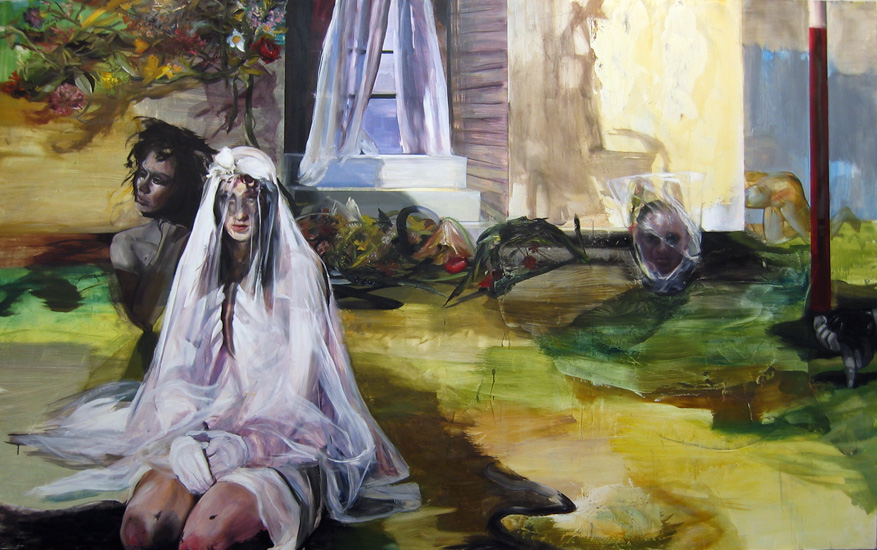 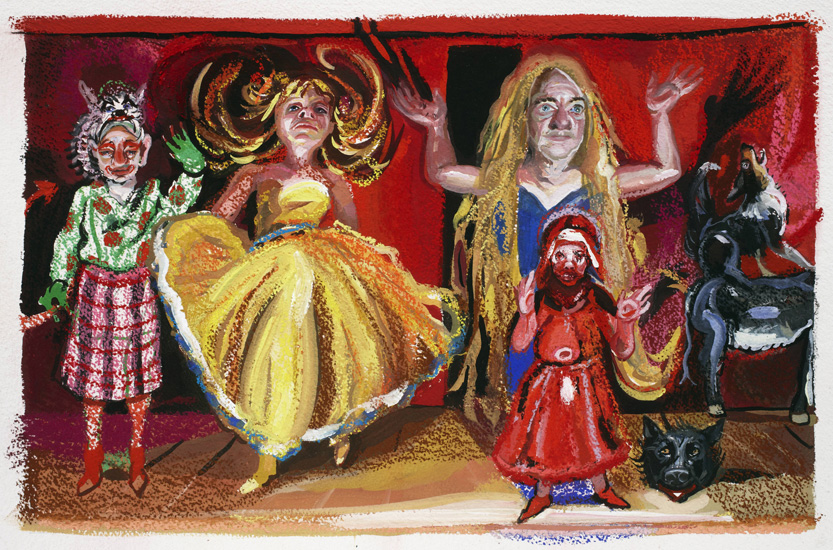 In fact, the Brothers Grimm fairy tales that Frank illustrated to acclaim between 2011–14 and exhibited at The Drawing Center in New York in 2015 are a perfect point from which to access her practice. The unexpurgated versions of these stories share an atmosphere and tone with Frank’s paintings: at first appearing seductive and familiar in their bright, carnivalesque colours, yet quickly turning dark and grotesque through their narrative content. Her paintings, like her illustrations, are populated by a cast of uncannily recognizable characters and recurring tropes – mirrors, the doppelganger, the bride, the blind-man, the exorcist, the nude – arranged into unsettling tableaus. Like stills from a David Lynch film, the quiet horror of Frank’s work is often set against banal, suburban backdrops of net curtains and clapboard houses, reinforcing that it is rooted in the real world and, therefore, making her criticism of its politics all the stronger. Her forthcoming exhibition of drawings and paintings based on ‘The Story of O.’ will open on May 16th at Half Gallery, New York.