Zach Blas’s work ‘Contra-Internet’ explores the glowing, gushing and violent ends of Silicon Valley’s utopian ideologies. Its centerpiece, a short film titled ‘Jubilee 2033’, follows Ayn Rand on an acid trip to the future, where her ideas, adopted by Californian tech moguls, are played out to an uncanny extreme. The film features gender non-conforming performance artist Cassils in an unforgettable role that queers the presupposed category of “user” beyond recognition. Rife with overcooked special effects, the film embraces humor over voracious critique, leaving signal processing to the mind of the viewer. I interviewed Blas on the occasion of his current exhibition at Art in General in New York and the film’s European premiere at the 2018 Berlinale Film Festival in its Forum Expanded program. A version of Contra-Internet was also shown at transmediale 2018 face value. 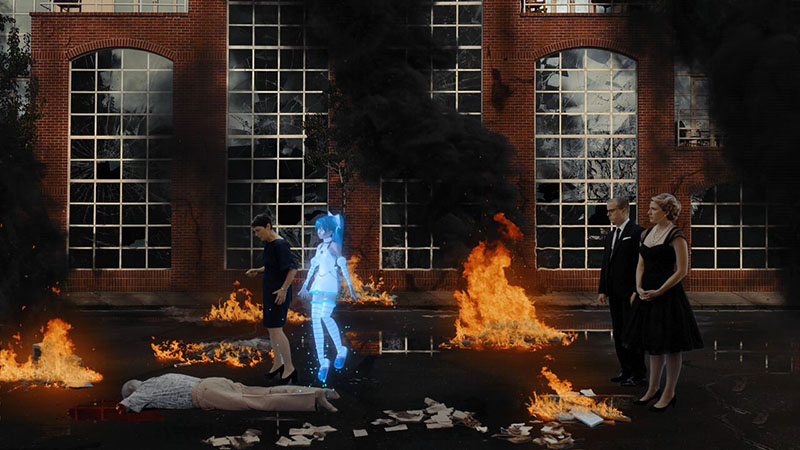 Benjamin Busch: What is “contra-internet”? The idea makes me think about decentralized technologies like mesh networks and blockchains. Can I be Contra-Internet, or is the contra-internet a place like “the internet”?

Zach Blas: I think of “contra-internet” as an orientation or disposition but also a concept that aims to solicit into existence an otherwise. The idea came through a moment of utopian plagiarism, which is a tactic I learned from Critical Art Ensemble. One takes a pre-existing idea, word or phrase and then slightly alters this, so that an alternate possibility may emerge. For instance, CAE did this most notably with Thoreau’s civil disobedience, when they added the word electronic in front of it.

I developed contra-internet out of Paul Preciado’s text ‘Manifiesto contrasexual’. It was kind of an accident, or at least something I wasn’t anticipating. But what compels with this term is that contra-internet arises from the contrasexual. As I started grappling with the concept, I wasn’t sure what it could mean, but I saw it as a crucial linking of queerness and feminism to political engagements with networks and the internet today. For some years, my practice has been centered on bringing such minoritarian approaches to bear on the various aspects of science and technology, whether biometrics or military weaponry. 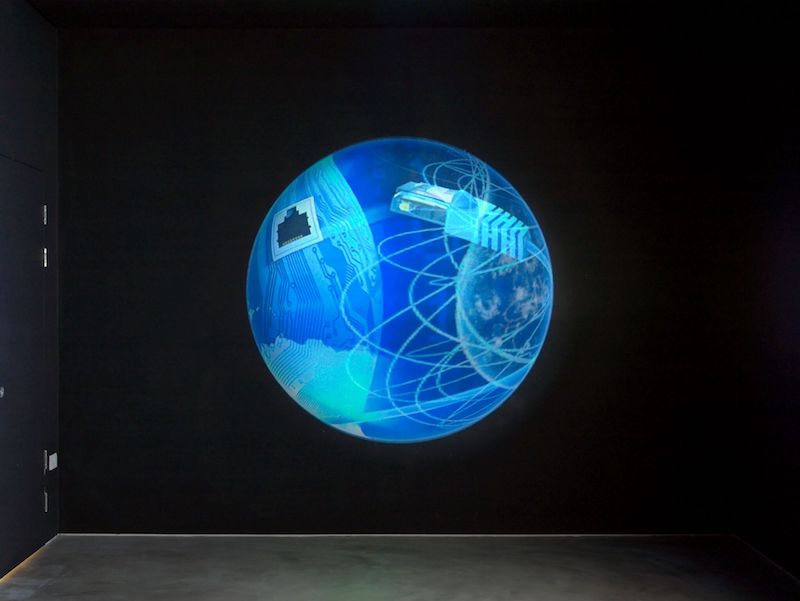 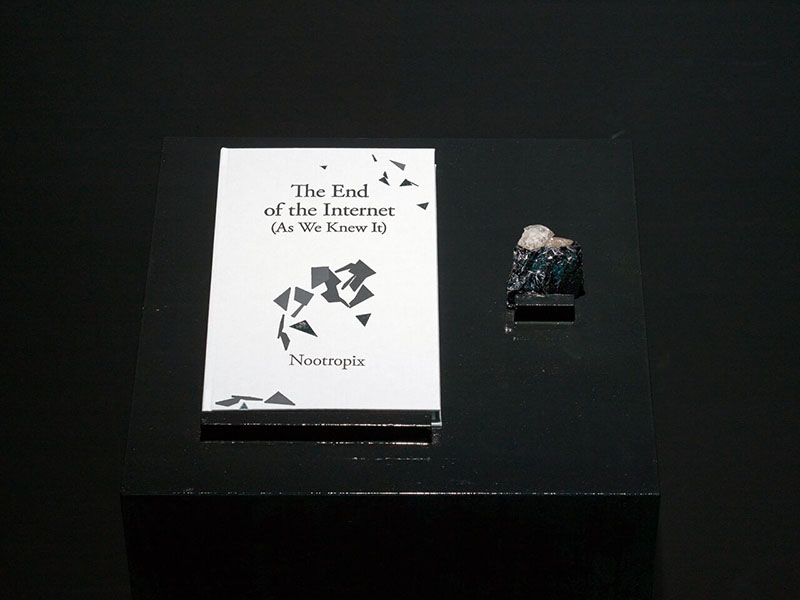 Just as Preciado articulates contrasexuality as a kind of alternate knowledge and practice that disarticulates itself from naturalized, heterosexist notions of sex and sexuality, I have come to view contra-internet as a term that pushes against the ways in which the internet, as a kind of dominant social condition, is attached to modes of governance and cultural hegemony, such as neoliberalism and mass surveillance.

That said, in some instances, contra-internet may indeed be a mesh network, especially if that technical formation permits resistance against the internet as we know it. Here, I think of 2014 pro-democracy protests in Hong Kong, which used mesh networking technology in order to avoid state surveillance and a potential internet shutdown. Ultimately, as a concept, contra-internet should not be attached to a particular technology, but rather a political outlook, one that I can only describe as queer utopianism. As such, I like to imagine the concept is committed to at least two goals: 1) practical work towards building alternatives to corporate network/internet infrastructures, and 2) the philosophical/creative work of imagining a form of relation and communication beyond the network itself. 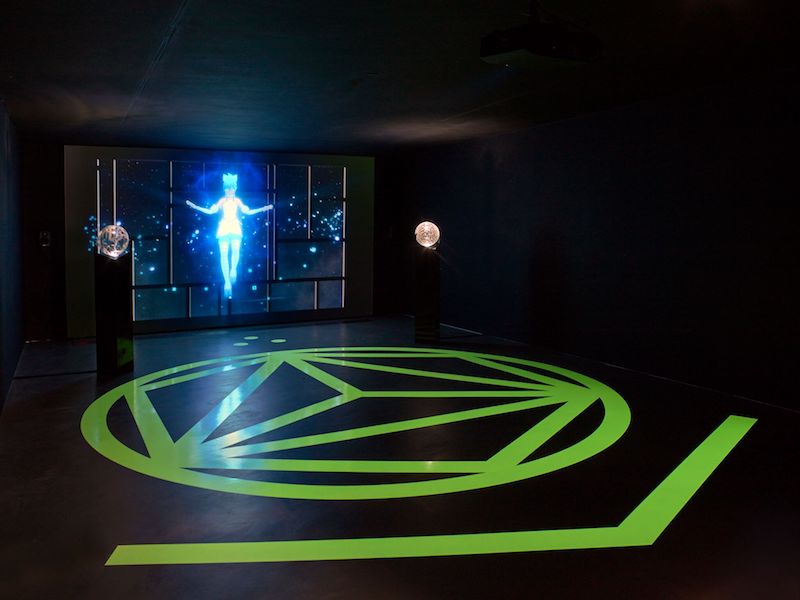 BB: Your ‘Inversion Practices’ series collides the terminology of network cultures with critiques of capitalism and heterosexual society. How does your use of inversion relate to Preciado’s notion of inversion?

ZB: Film was the first art I studied and so, at an early age, I was exposed to Jarman’s work – ‘Jubilee’ was the first of his I saw, actually—which began my second long-term love affair with a queer filmmaker (Gregg Araki was my first). Looking back, I see elements of ‘Jubilee’ in almost everything I’ve made. I have always been intensely attracted to its characters, the words they speak, the rage and militancy, the magic and mysticism, and of course, its critique of media and corporate subsumption. To me, directly reckoning with Jarman’s ‘Jubilee’ just seemed like a natural, and perhaps necessary, progression in my practice. Maybe now that I’ve done my film I’ll be free to step back from ‘Jubilee’, this film that’s had such a hold on me for so many years! 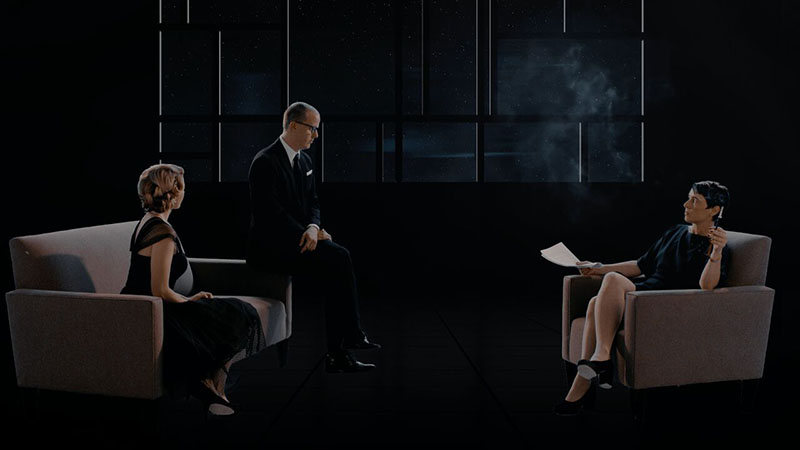 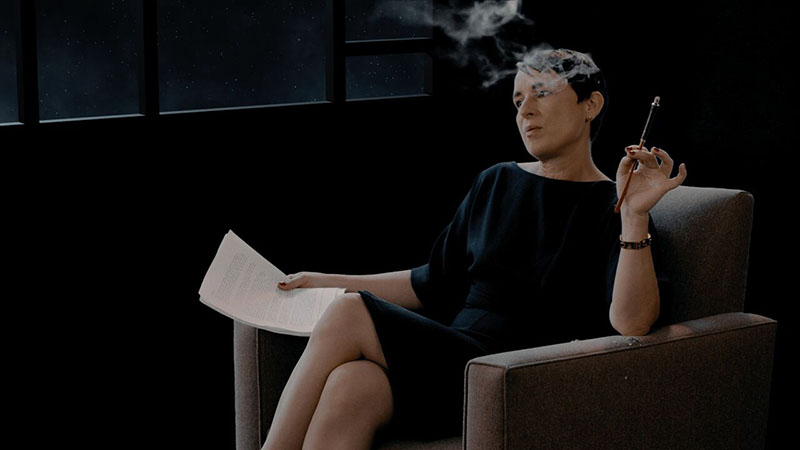 In ‘Jubilee 2033’ I tried to work with all the elements in the original that I love, but I particularly wanted to work with its narrative structure. Jarman’s film is mostly spoken of as a queer punk film, but it is never usually recognized as a work of science fiction. As far as I’m concerned, Queen Elizabeth I time-traveling to 1970s London is absolutely of the genre. Additionally, the film is about political figures and the wreckage of the future. I was always so moved seeing Elizabeth standing in a burning urban wasteland, towards the end of the 20th century, confronted with a future scenario that she is complicit with bringing into existence. This is to say that ‘Jubilee’ is ultimately a film about nationalism—the future of England, more specifically. My film is concerned with the future of the internet, which concerns the global scale, not just an individual country. 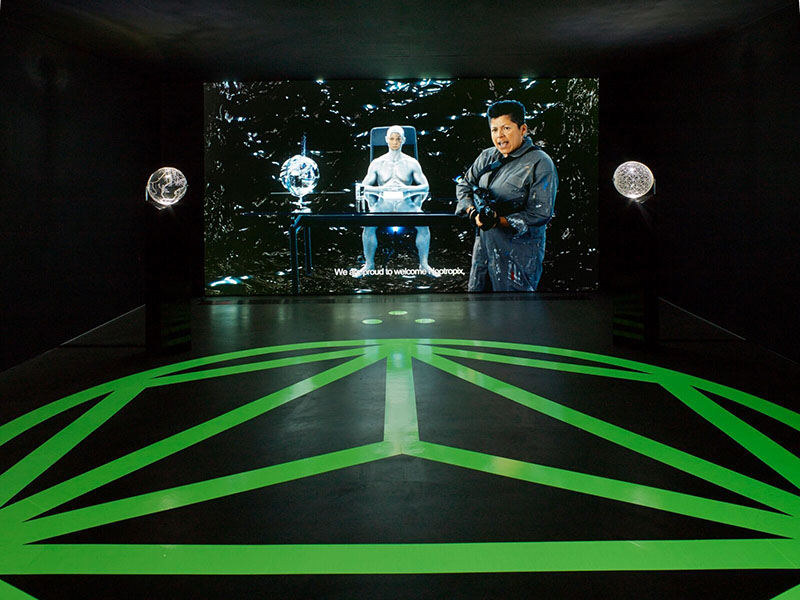 I wanted to make a film that took an early influencer of contemporary internet culture (I chose Ayn Rand) and catapulted them into a future Silicon Valley. Working with Jarman’s film—basically doing a utopian plagiarism to it as well—was so perfect for this. In the original, the title refers to the 1997 Silver Jubilee of Queen Elizabeth II. In ‘Jubilee 2033’, a 50 year jubilee is imagined from the date 1983, which is when the internet protocol TCP/IP was integrated into ARPANET. There are, of course, multiple dates one could pick to signal the creation of the internet or world wide world, but I was particularly taken with this one, as it marks a move from military to public—and interestingly, the event is referred to as a “flag day,” which I thought evoked a kind of nationalist haunting that resonates with Jarman’s film. 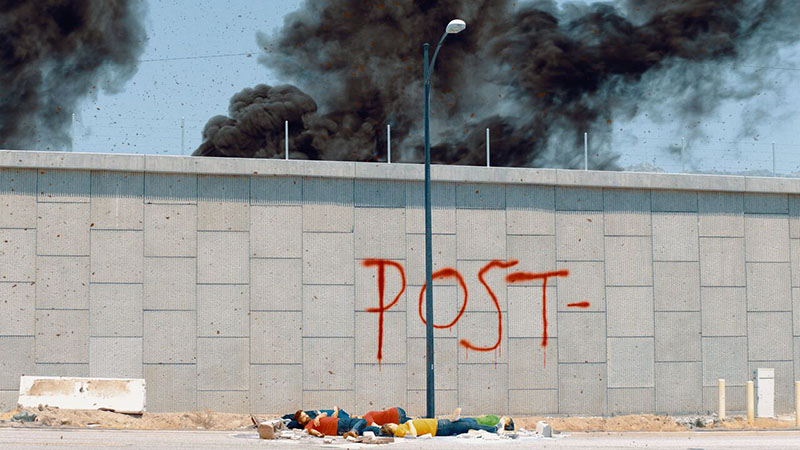 BB: What considerations about sex and gender, technology or autonomy brought about the antihero Nootropix, performed by Cassils?

ZB: Nootropix is based on Amyl Nitrate in the original, who is described as “a historian of the void” in Jarman’s script. It’s quite tough to match—let alone top—a name like Amyl Nitrate, played by the fierce and unflinching Jordan, a major figure in the London scene at the time. As my film is grappling with various elements of Silicon Valley culture, I chose to develop a name of out the chemicals and drugs currently on trend there, namely, nootropics. Also known as smart drugs, these are cognitive enhancers that increase brain capacity, which tech workers enjoy, as it enables them to become better laborers. Etymologically, nootropic comes from the Greek, meaning mind-bending. In the film, I see Nootropix as the queer, minding-bending drug that poisons the ideology of Silicon Valley. Of course, Nootropix is able to do this with their gushing dildo-fountain, which is both a nod to Preciado’s contrasexual dildo and a queer joke on Ayn Rand’s famous novel ‘The Fountainhead’. 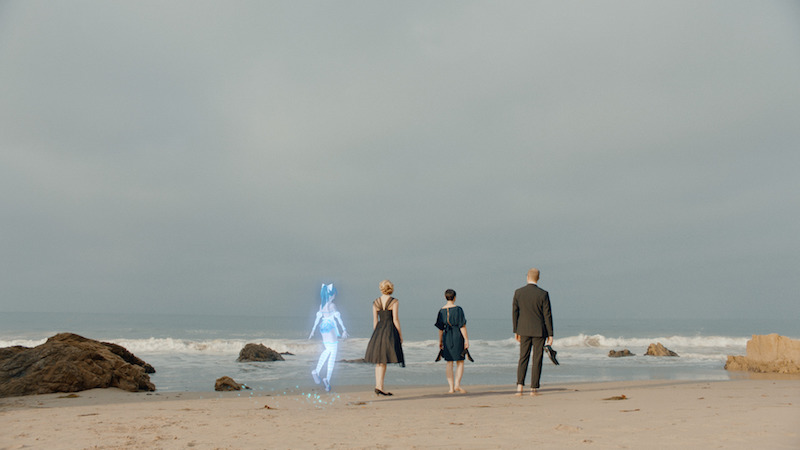 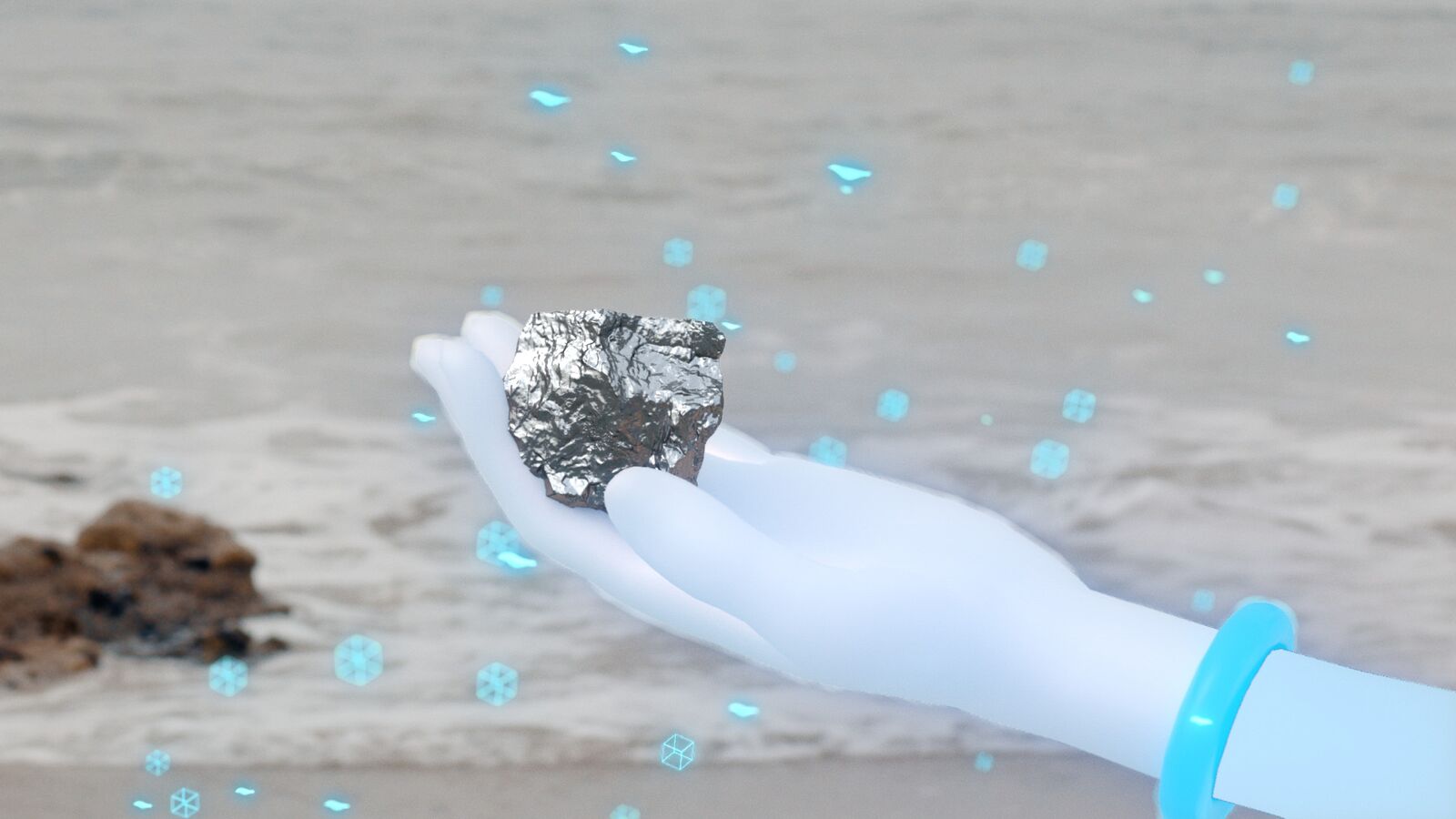 BB: What’s been your experience navigating multiple formats and forums for your work, ultimately taking shape in a video installation?

ZB: I typically start a project by developing a concept or discursive frame and then make work around this. As I mentioned, I began ‘Contra-Internet’ with the ‘Inversion Practices,’ but I also did that because it doesn’t cost money to make such laptop videos! About a year later, after I received major funding to make a film, I leaped at my first chance to make a large-scale immersive film installation. I am happy to present ‘Jubilee 2033’ as an installation or in a cinema. I tend to prefer the more all-encompassing installation option, but I do enjoy both immensely. I was a cinephile before I could even read, so I must say, returning to film and making my first at this point in my life is quite exhilarating and humbling. At the European premiere of ‘Jubilee 2033’ I became so incredibly nervous right before the screening, because I had never experienced an audience like this for my work: so many people, seated, quiet, paying attention, all watching together at the same time! I was suddenly nervous that my film would seem a bit too slow. I quickly realized that I was suffering from, or expecting, art world attention spans. This film crowd was so attentive and focused—I was mesmerized by that. I can now safely say that the film is not slow but most definitely the philosophical acid trip it aims to be.