In his first solo show in continental Europe, ‘The New Dialogue’, Cameroonian artist Ajarb Bernard Ategwa establishes himself as one of the most promising emerging portraitists; however, his portraits are not of individuals, but rather communities. With the vibrancy and dynamism of a bustling city, the saturated colors and sinuous lines in Ategwa’s canvases celebrate his adopted hometown, Douala, a center cultural confluences and exchanges. Amidst all of this energy, viewers feel like neighbors. They find comfort in the lower bands of Ategwa’s paintings and the familiarity and leisure within his narrative tableaus. The artist spoke with Berlin Art Link about his studio practice, the inspiration he draws from urban life, and the dialogues he hopes to catalyze with his debut solo show at Peres Projects. 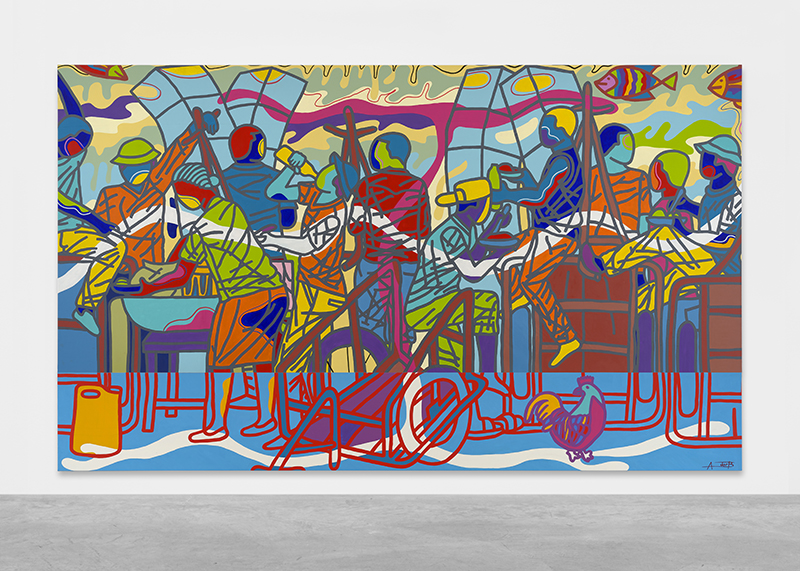 Jack Radley: How did your practice begin, and what is it like today?

Ajarb Bernard Ategwa: I started painting as a child around 1998 when I was living in Kumba, Cameroon. I started considering myself an artist later in life, around 2007, when it really became my profession. My studio is located in Douala and it consists of a small, 48-square-meter space made of wooden planks, a very common material in the region. It was built on top of a family house in a one-story building. The space is very small for me and makes it a challenge to manipulate or move my large canvases, but I am planning to move to a bigger studio so I can work more freely. It’s already in the works. 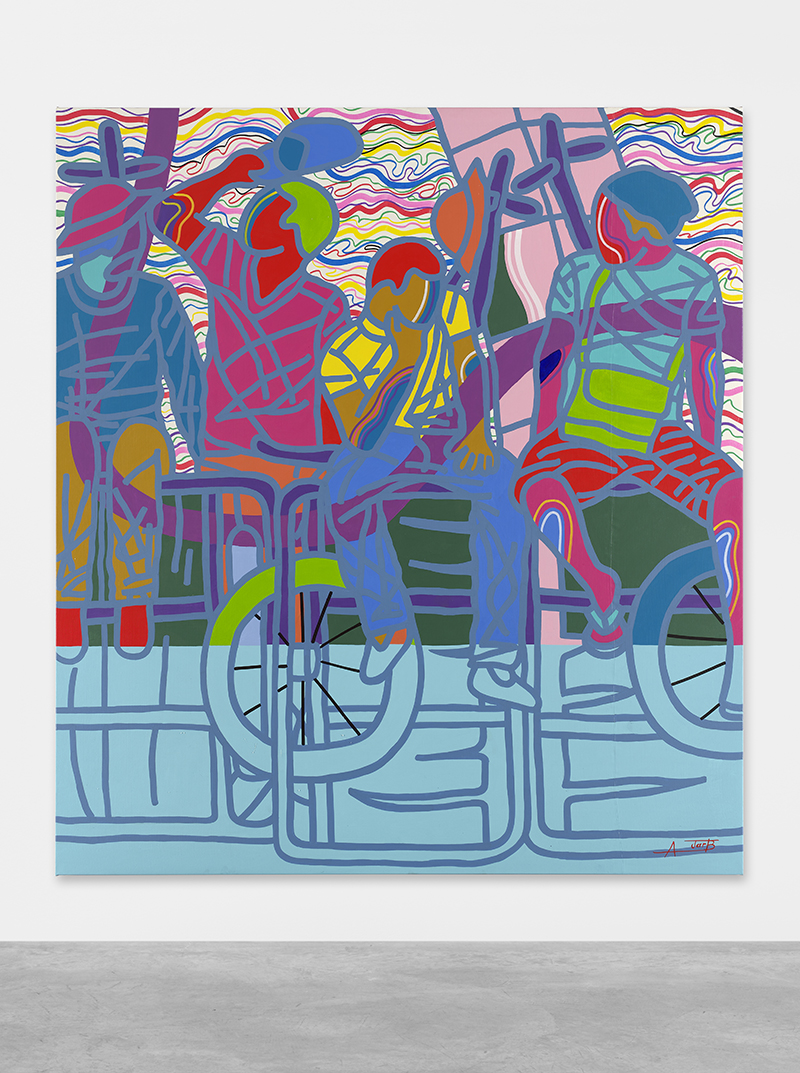 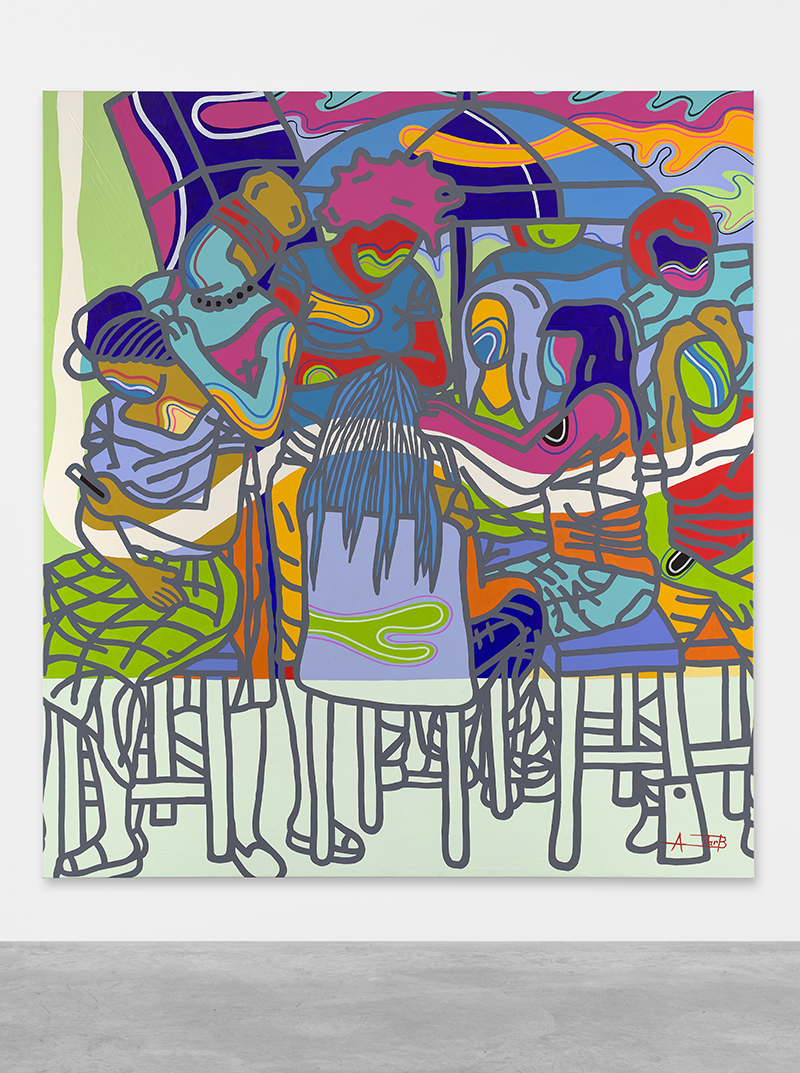 JR: Your paintings often dissolve into skeletal passages towards the bottom. What is this space for you?

ABA: My paintings are full of vibrant colors and could sometimes be perceived as overwhelming by the viewer. That’s why the space on the bottom is meant to be a pause. It’s a point on the canvas to rest your eyes a little. 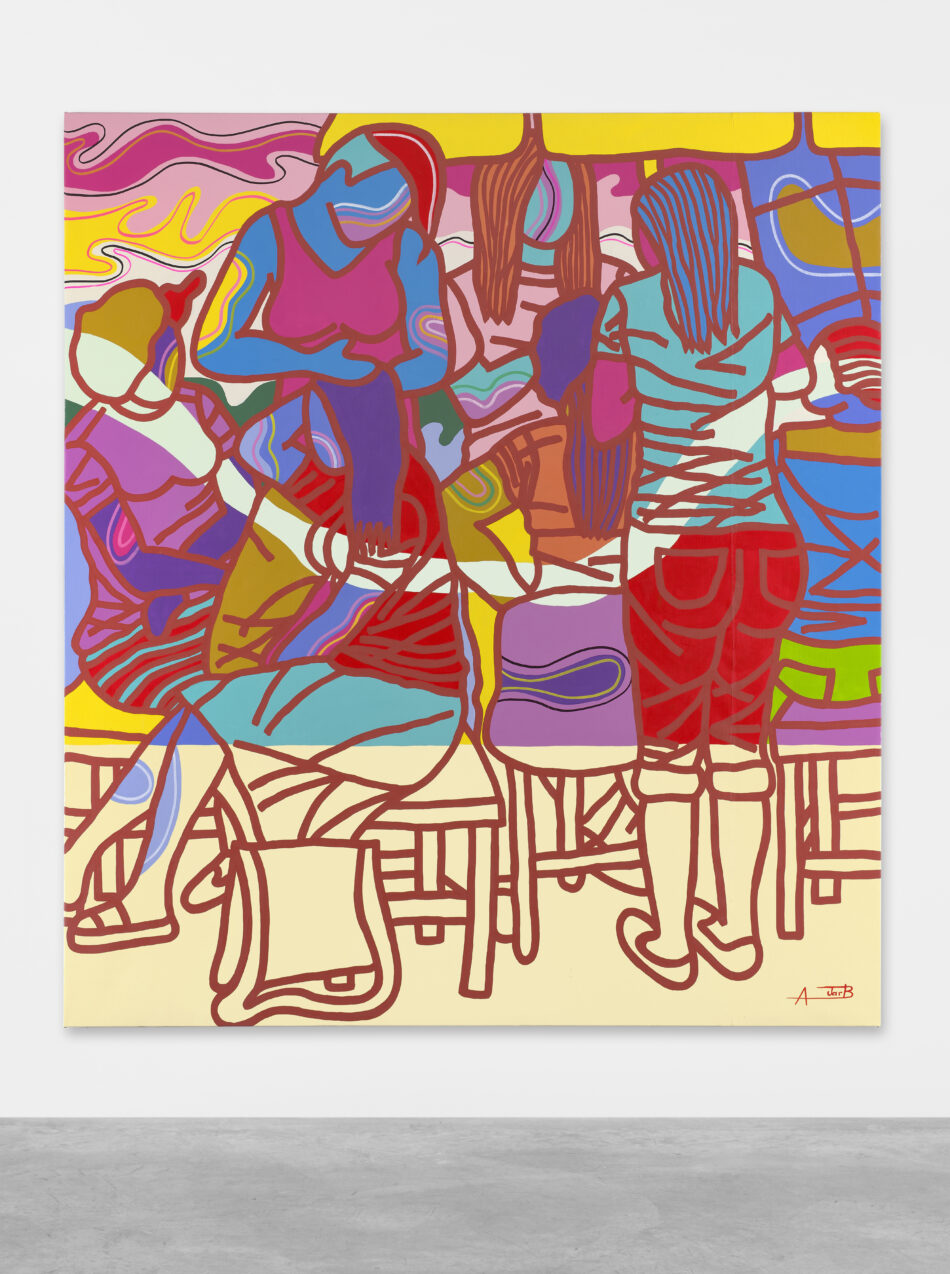 JR: You capture the day-to-day realities of life in Douala, drawing on Cameroonian pop culture. What is your source material?

ABA: My paintings are my daily life, the experiences I have and what I see in my environment. On my way to the studio, I come across things like markets and cross-roads—all of these places are my source of inspiration. Once I reach my studio, I recall what I have seen and recreate my own scenes. I am interested in portraying situations from everyday life. Some people do jobs that, despite being very common in Douala, are out of the ordinary and peculiar. Women who run roadside hair salons are a good example. It’s very uncommon to see open-air hair salons anywhere else in the world. 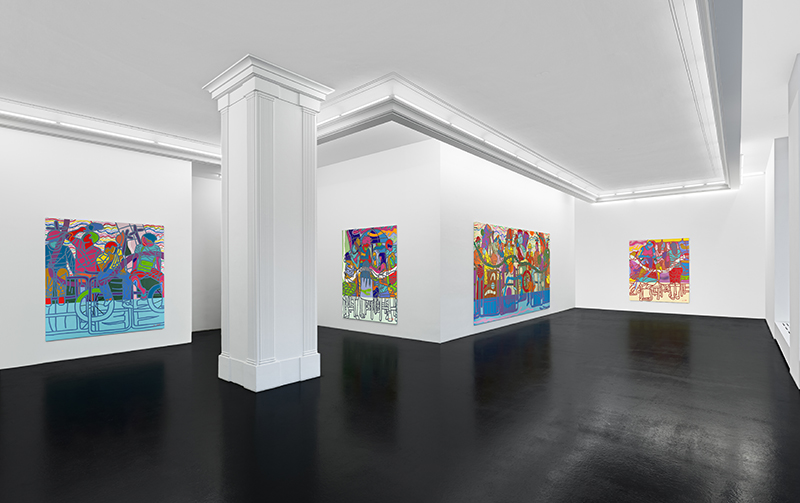 JR: Who are other artists you are in conversation with or influenced by?

ABA: As for young artists, I’m in conversation with Rostand Pokam and T. William. As for senior artists, I look to Koko Komegne and Hervé Yamguen. The ones who have really influenced me are Pascale Marthine Tayou, Alex Nwokolo, and Jean Emati. 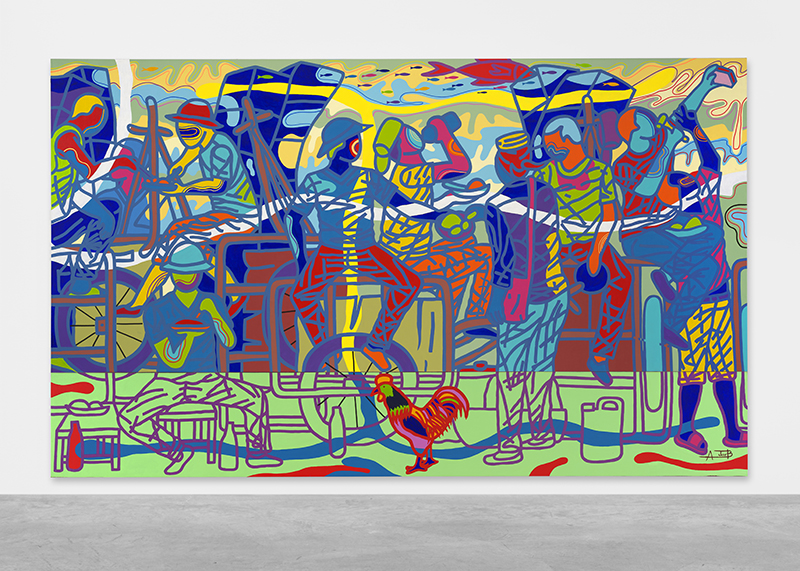 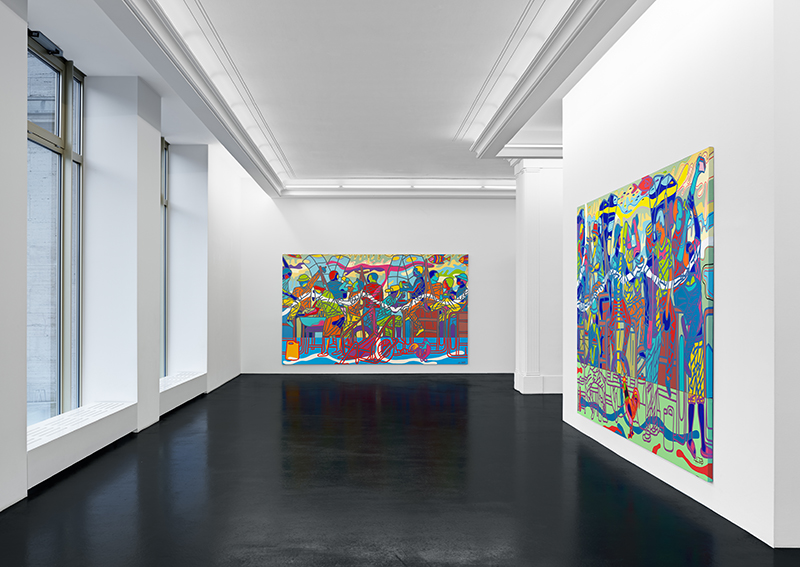 JR: Your show is titled ‘The New Dialogue.’ What dialogue do you hope to catalyze with this new work?

ABA: The title has multiple meanings. First, it signals the start of working with Peres Projects, which is a complete new experience for me, a “new dialogue.” I’m very interested in the idea of my personal communications with the world beyond Cameroon and to exhibit in an important art capital such as Berlin is very important. Moreover, the title is related to the subject of my paintings. I depict many different characters who work in the same field. They might not know each other, but they have experiences to share. Each relationship that starts between them is a “new dialogue,” which is also the title of my first painting for this exhibition in Berlin. Through my work, I want to catalyze the strong need of a conversation between the public across the world and the characters on my canvases. This is a possibility for people who don’t know Africa or Cameroon to have an overview of the daily life of people here, to show their aspirations, their struggles, and their successes.