Florence To is something of a polymath: originally trained as a pattern designer and tailor, she has honed her skills in digital technologies to create immersive light environments and installations around the world. Working with musicians like Hauschka, Jlin or Drew McDowall, the Scottish artist wants to take us on a journey deep into the folds and cracks of the human mind. During CTM Festival in February, alongside John Connell, she performed the German premiere of ‘NOQTURNL,’ an overnight performance exploring the threshold between waking and dreaming. In the creative haven of MONOM, Berlin’s Centre for Spatial Sound (also known as 4DSOUND), participants bathed in sound and light, and let their dreaming minds be steered toward alternate universes. 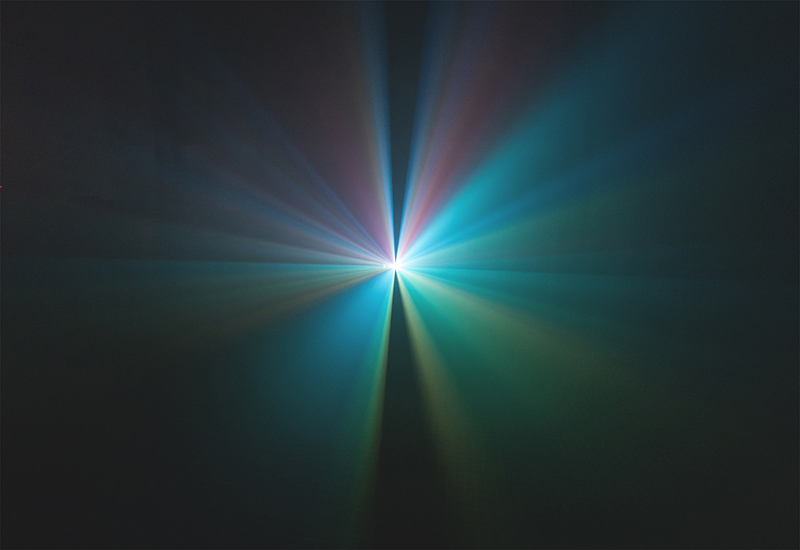 Florence To, John Connell: ‘NOQTURNL’ // Image Courtesy of the Artist

To spoke to Berlin Art Link about altered states, consciousness, and her upcoming collaboration with Antoine Bertin in curating the ‘Ecoacoustics’ workshop at MONOM in May.

Diane Barbé: Your recent installations seem to play on the possibilities of alternate universes, augmented realities, perhaps, by manipulating our sense of space. How would you describe your architectural visions and aesthetic directions?

Florence To: I’m technically trained as a designer and, as I originally chose to specialise in tailoring, I still use the method of seam placements in any work that revolves around space. The main idea comes from the architectural space first and learning how to design with that environment. The 4DSOUND visual exterior, for instance, makes a powerful and striking first impression, but it is still a blank canvas in its own way. It was an ideal space for me: I generally like to work with dark spaces rather than white (although white has its advantages). Darkness gives me other challenges to work with. When projection-mapping a space, I first design a 3D model of all the possible angles, and I cancel out the methods that don’t work. The next step is to visualise this in the actual space and again figure out what doesn’t work. I tend to focus on filtering out processes that don’t seem functional. With ‘NOQTURNL,’ I had to keep in mind that people would be laying on the floor and knowing what would be the most effective angle for the experience. 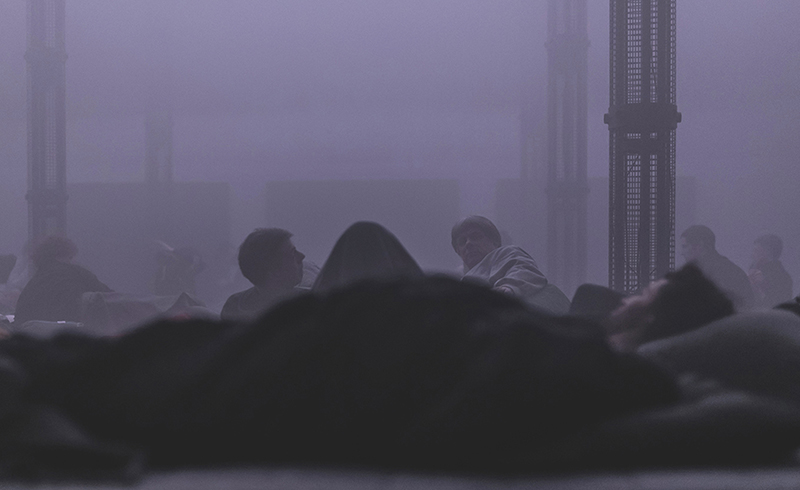 Florence To, John Connell: ‘NOQTURNL’ // Image Courtesy of the Artist

Conversely to the actual physical design of the installations, I also focus on psychoacoustic properties. I have to balance the two but usually the sound environment comes as a priority. In my previous installation, ‘EOAN’, I designed a layout of 13 pipes whose tonal frequency I measured to get the desired vibrations. The next step was to plan how these resonant vibrations would travel and how I could guide the participant in playing these pipes, and also to play with each other. The exhibition was in a basement with unlevelled ceilings so hanging the pipes became the most difficult part. The 13 pipes where split into three tonal groups in the space, hanging vertically and horizontally. This was intended to create a bodily experience of different temperaments; eventually, playing the pipes with the mallets would create tension in the participants, it would change their physical perception between body and sound.

Design becomes much more interesting when trying to think of solutions for things that don’t appear to work at first. I think my persistence to fixing failures (at first) frustrates my working environment but in the end, something positive comes out of it, so I don’t think I will give up this way of working anytime soon. 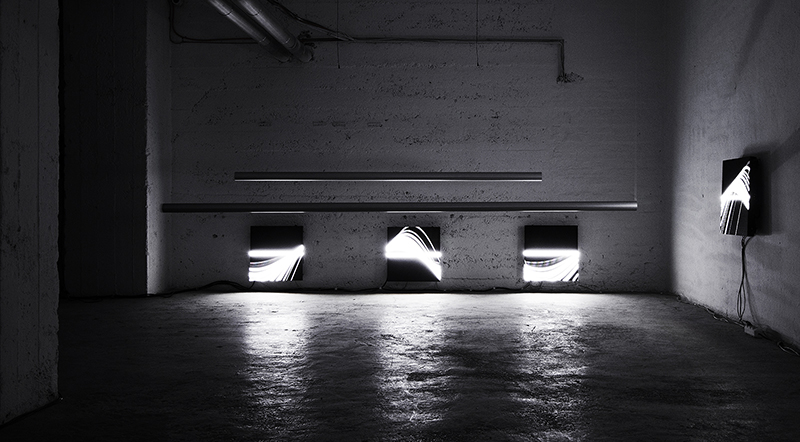 Florence To: ‘EOAN’ // Image Courtesy of the Artist

DB: I wanted to come back to ‘NOQTURNL’ and ask you about your process in creating this performance. How did you address the challenge of creating visuals for people who have their eyes closed?

FT: Before John became creative director of 4DSOUND, we did our first residency in early 2014, learning to use the space and experimenting with the capabilities of the system. For this iteration, we held a workshop inviting some people to participate in breathing exercises and meditation; John would use some of his sound design during the meditation and eventually light would appear on the columns, using mainly particles to react with the frequencies from the audio. This hadn’t yet become ‘NOQTURNL,’ we were still figuring out how to effectively develop this type of performance.

It was in our second residency later that year that ‘NOQTURNL’ evolved. At that time, the sound system was still in the Netherlands, and it had to move to another location, which we could only access between 9pm to 6am. We only had a week to prepare the second iteration, which wasn’t easy since it meant inverting our normal sleeping pattern. Working in that state of mind guided us into this different realm: we were sleeping in the space at the beginning, waking up every few hours tweaking the light, moving the projectors, altering the sound and half of the time we were probably half asleep. The first day, I had to sleep throughout the first session as I had hurt my back and I couldn’t move. I stayed on the floor of the system for the duration until it was time to leave in the morning. Perhaps the way I felt with the space initiated some ideas and emotions towards my environment. This is when the concept of the installation fell into place.

To create the visuals, I wanted to work with the physical architecture of the system. Through mapping the columns, I was able to exaggerate the perspective of the viewer on the floor…with light rays appearing just above the face, from the corner of the eyes, and a deceptive appearance of dimensions shifting and dissecting through the space. At times, everything remains in constant motion, to create an alternate reality, perhaps like hypnosis. Hypnosis as such is not the main focus, but it is one element of the performance I considered, to gradually direct the audience into a certain state of mind where they begin to accept their environment and be more vulnerable to what will happen next. 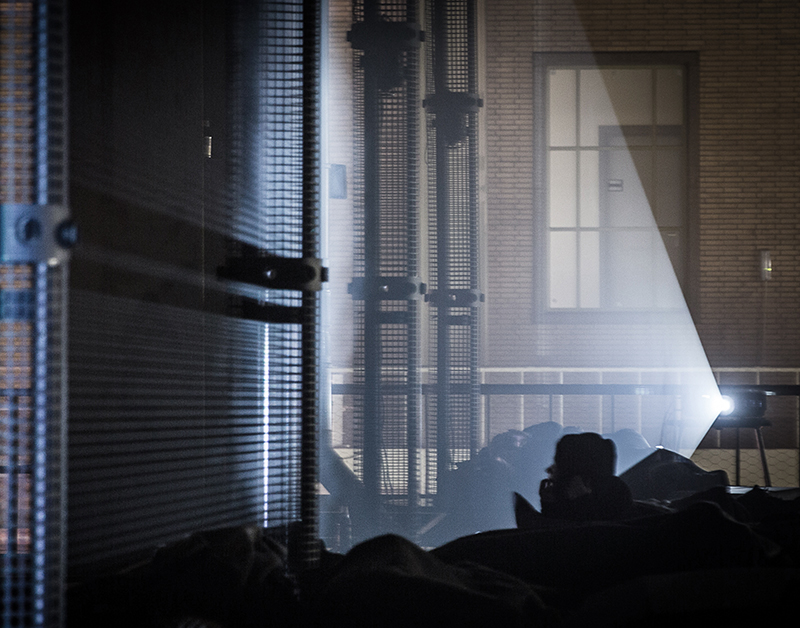 DB: Let’s talk about hallucinations. The system at MONOM is so complex and so good at tricking the mind, creating fleeting auditory illusions that really disturb the way we map space and understand it. Yet in an interview about your work ‘FOVEA,’ you said: “I don’t want to dictate their brain. I really want the audience to choose for themselves.” Can you expand on this?

FT: ‘FOVEA’ was my first proper installation and also when I became quite interested in biophysics, particularly on the impact of vibrations on the human senses. I see my work as complete once it’s given to the viewer: they are the last piece of context in the creation. I think it’s important to challenge their judgment by not giving any pre-context of the work; then you know that however they perceive the work has a distinct impact. Letting the audience choose for themselves also creates a welcoming environment for them to feel part of the piece. My primary focus is always an emotional response from the audience: tension and release. But I noticed quite early on that in order to not over-intellectualise the thoughts of the audience, I should give very little information prior to the performance or perhaps consider a more objective text to prepare the viewer to become objective themselves, at least in the beginning. People want to relate, it’s a natural human element. 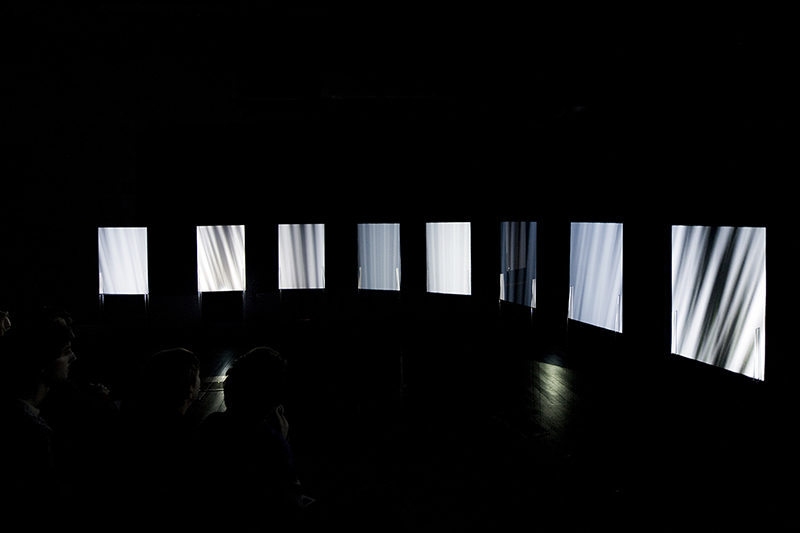 Florence To: ‘Fovea’ // Image Courtesy of the Artist

DB: In May, you will be guiding the ‘Ecoacoustics’ workshop at MONOM. Can you tell us more about that?

FT: It’s a 4-week workshop in collaboration with School of Machines, Making & Make-Believe and French artist Antoine Bertin, who creates experiences using immersive sound, materials and interactive storytelling. We will be working with various recording techniques that could be implemented with spatial sound technologies, creating storytelling through sound, working with binaural systems and creating ear moulds, for instance. The idea is to learn about and create different acoustic environments, and in the last two weeks the participants will have the opportunity to design a composition and eventually a performance with the 4DSOUND system at MONOM. We want the participants to understand sound as material, and how this material can be used in different environments to generate an awareness of what an acoustic place could be. The objective is to construct a dialogue with the sensitivity of the material, exploring how we individually process information through experience. It is quite a unique opportunity to perform on a special system like 4DSOUND and it will be a good pathway to also encourage inspiration towards the participants’ future projects.