Kareth Schaffer’s piece ‘Cassandra Has Turned 2’, which premieres at Sophiensaele on the 18th of April, dwells in the layers upon layers of worlds that blossom when prophets/performers are moved to speak, dancing upon the shifty relationship between self and proclaimed truth. In the durational precursor to this work, ‘Cassandra Has Turned 1’, three performers spontaneously prophesied for 4 hours. With the transcriptions, and the help of a composer, Schaffer wrote a libretto and set the prophecies to music, creating the structure for this frontal sequel. Schaffer asks not whether but when artists, frustrated like Cassandra at not being heard, will dive into the world of prophecy for its own sake? 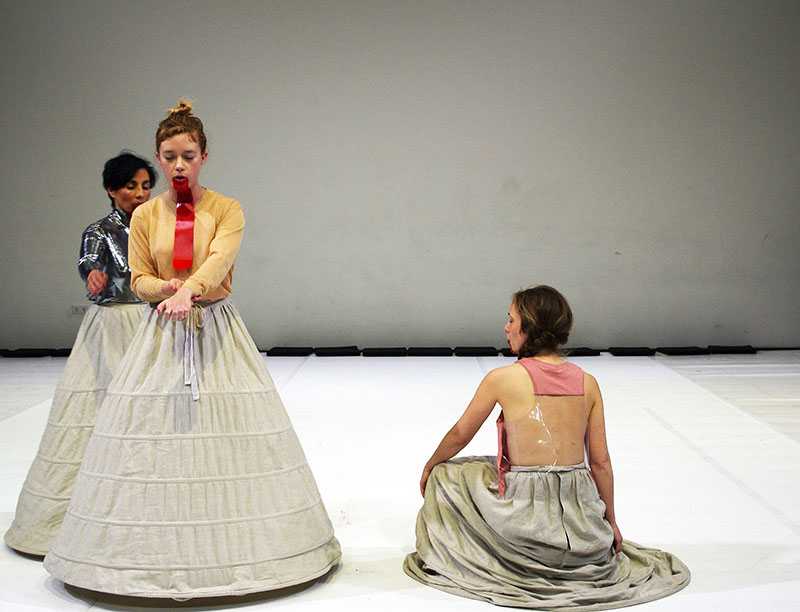 Louise Trueheart: Why is there a vape in Cassandra?

Kareth Schaffer: It’s a reference to the oracle of Delphi, one of the inspirations of the piece. She supposedly sat on a tripod stool above this slit in the ground and breathed in the vapors, and that was what gave her the powers of prophecy. It’s one of the ‘fog moments’ in the work.

LT: Fog moments? What are they?

KS: Moments about blotting out the image of bodies on stage. I think this metaphor of the cloud, or things that are blurry, or things that appear to be one thing but are another is aligned with prophecy, and the practice of prophecy. And, of course, it alludes to the haze of the future or the past. 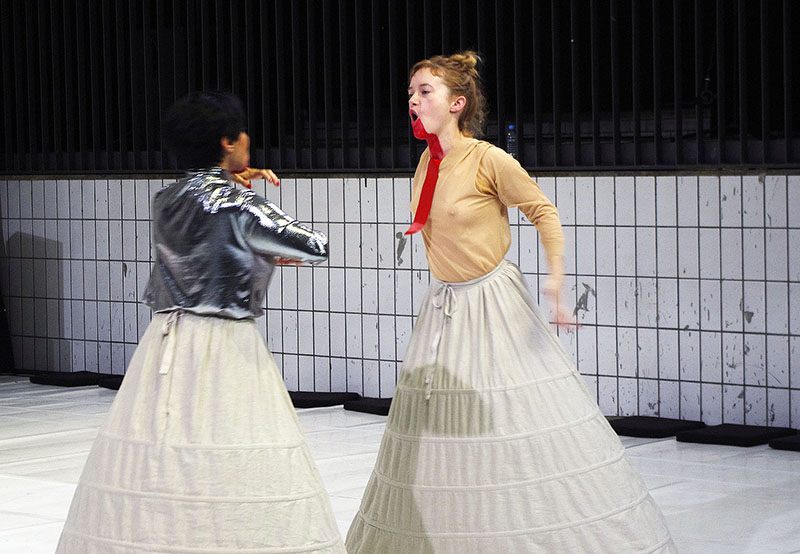 LT: Do you feel like you are intentionally avoiding the present?

KS: In working on this piece, and the specific way we look at Cassandra and at prophecy, you start seeing the present as an amalgam of many layers, including the past, the future, but also the fantastical, the symbolic, the meta. Certain ways of looking at the present as, “what is happening now” try to obscure it. But with Cassandra, we’re turning that on its head and going for maximalism and overload and everything happening simultaneously and several ways of looking at things at the same time in the same space.

It’s going to be a very wordy piece. A lot is not scripted; it’s improvised prophecy. So the performers are making things up, or prophesy-ing on the spot. Some of it is very scripted but asks: what makes words important to listen to? Is it because they’ve been written before you hear them, or because they are set to music, or are in a language you understand or…? But can I ask you a question? Why did you connect escapism and Cassandra? What’s the link for you?

LT: I guess I was getting at it through this ‘avoiding the present’ idea. And I was curious about your reference to a time of alternative facts, where truth is as implausible as a lie. Is there a way to escape from, or are you interested in escaping life through art? And is that a political strategy?

KS: I keep talking about Cassandra as being fundamentally stuck. She is perfectly aware of what is going to happen, what the future is, but she can’t get anyone to believe her. She is in a city under siege, so she is confined to the same place. Everything that happens she sees coming. So there is this question of locating the border between trying to tell people something and getting frustrated about not being heard, and escaping into prophecy just for the sake of it. She is a princess or a priestess, and we’re postulating that she has this transformation: hoping to be understood, realizing she is not being understood and then despairing about that, and then sort of coming back with this irony of “well, we’re all dancing on the edge of the abyss anyway” and not shrugging her shoulders but dealing with the irony of that situation. It asks, what is your relationship to the truth that you’re postulating? We all find ourselves, especially right now, not caught in a lie but saying things without knowing what relation those things have to ourselves. 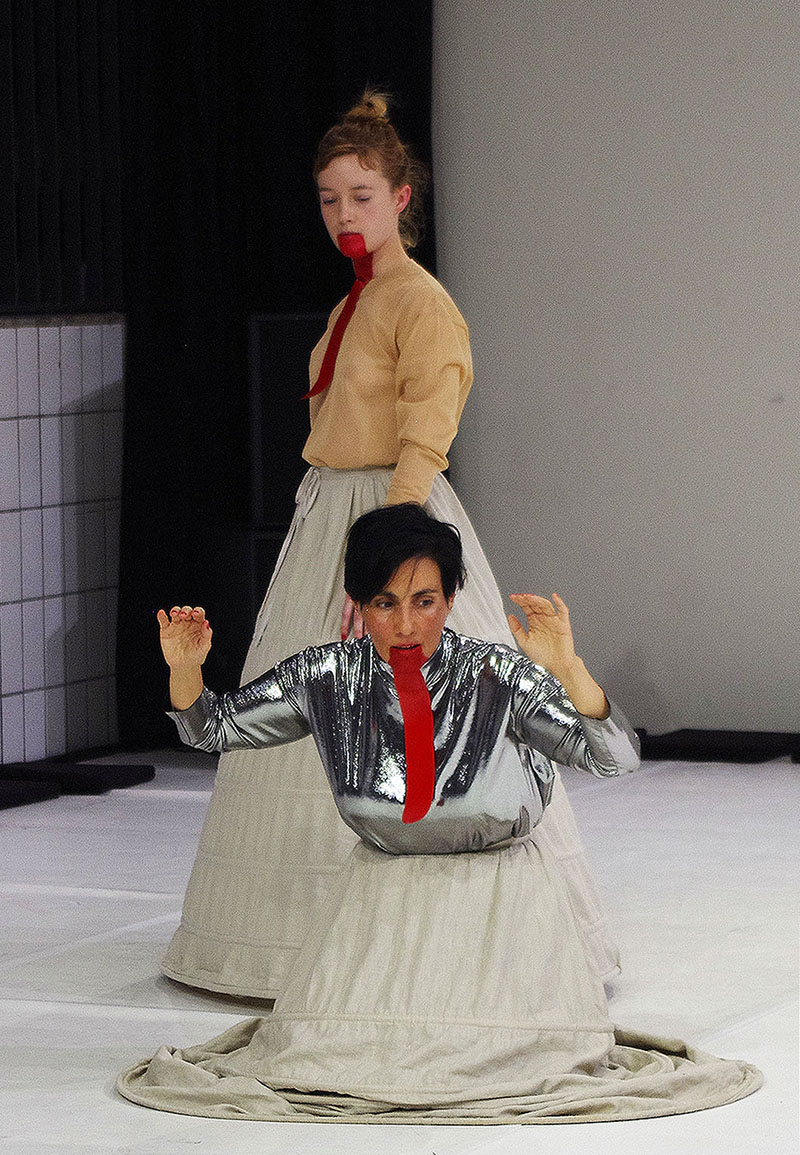 LT: That makes sense, given how we are living in a world where we are encouraged to produce ourselves or our subjectivities, and sometimes get caught up in the confusing entity of the self.

KS: Why I liked this practice of prophecy is also because it can expand to encompass things that are not physically present in the theater space. Which, coming from a dance background, is one of the things I’m pretty tortured about. How do you refer to anything other than the body in front of you? But then you throw open the worlds you can access through language and it’s a whole lot of worlds. Right now, the ‘evils that be’ are using a totally artistic strategy of just repeating something until they make it true. So then we have to look at those strategies again and rethink whether that is exactly what we want and what exactly are we referring to when we use these strategies.

Prophecy and its interpretation lie so closely together. You could say that everything we hear is referring to a postulated truth. We are sort of close to this mantra, this dangerous thing, about repeating something so much that you make it true. So all the prophesies we make speak to something that could be real or should be real or maybe shouldn’t be real but is real in spite of what you want.

KS: I’ll answer this via detour: I joined Die Linke party last year, after Trump’s election. The lefties. I did this from the desire to do something. I saw that my community of artists wanted to do something about Trump. It led to a brief spurt of a few months where every show I saw was somehow and somewhat unsuccessfully about Trump and it made me want one space in my life for the political, and one for the artistic, and what I am in the process of refusing is the notion that my work can only be political if I am feeding a) into identity politics or b) speaking to a concrete situation. I believe that right now art should become all the more renegade, fantastical, and spectacular, and hermetic and mysterious, and that people have this gaping need to feel things that are something other than moral outrage. Because I spend too many of my days being morally outraged about something! 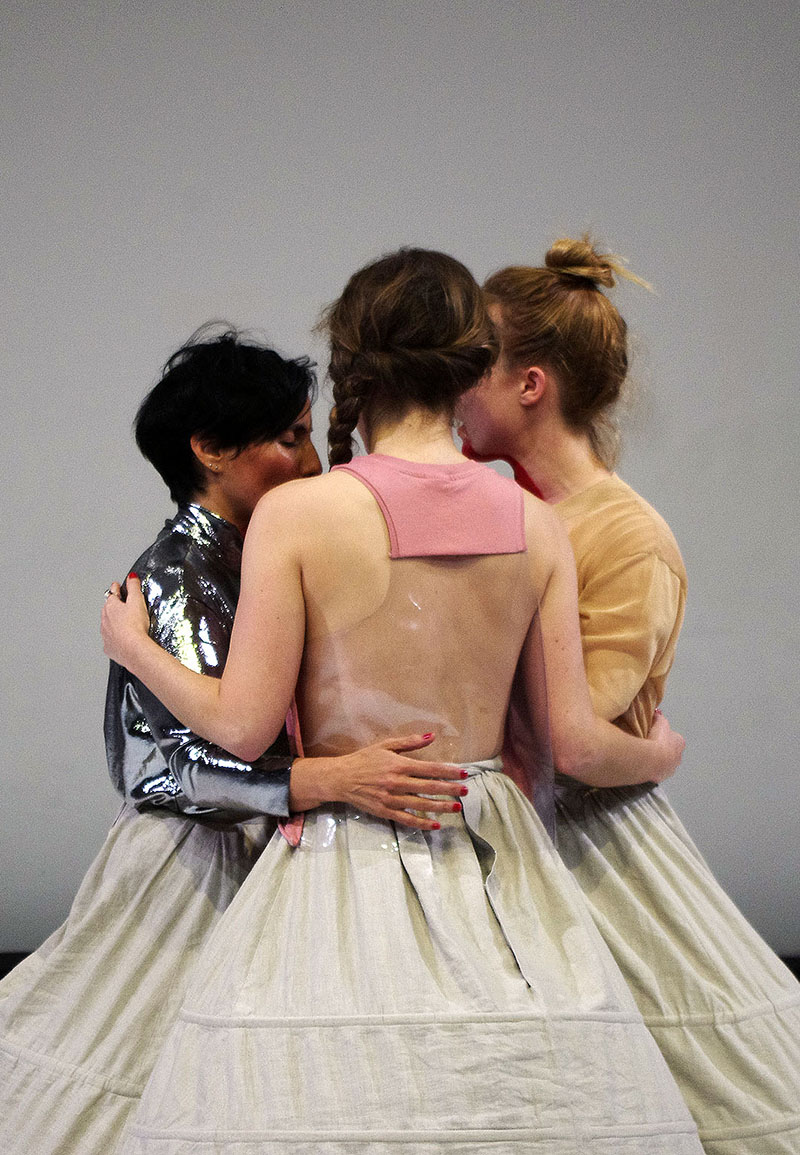 KS: I’m always interested in structural changes in how theater and the world lives diversity but I’m not entirely sure that the strategy of displaying that diversity at all times is an accurate way of going about that. Because then the “big topics” of space and time and monotheism and concept still remain in the realm of white cis men. That’s why I’m attracted to Greek Mythology: to work with tropes that are ancient but also distinctly euro-centric and literary. We have to look at these myths and find the truths that speak to another way of looking at the world. 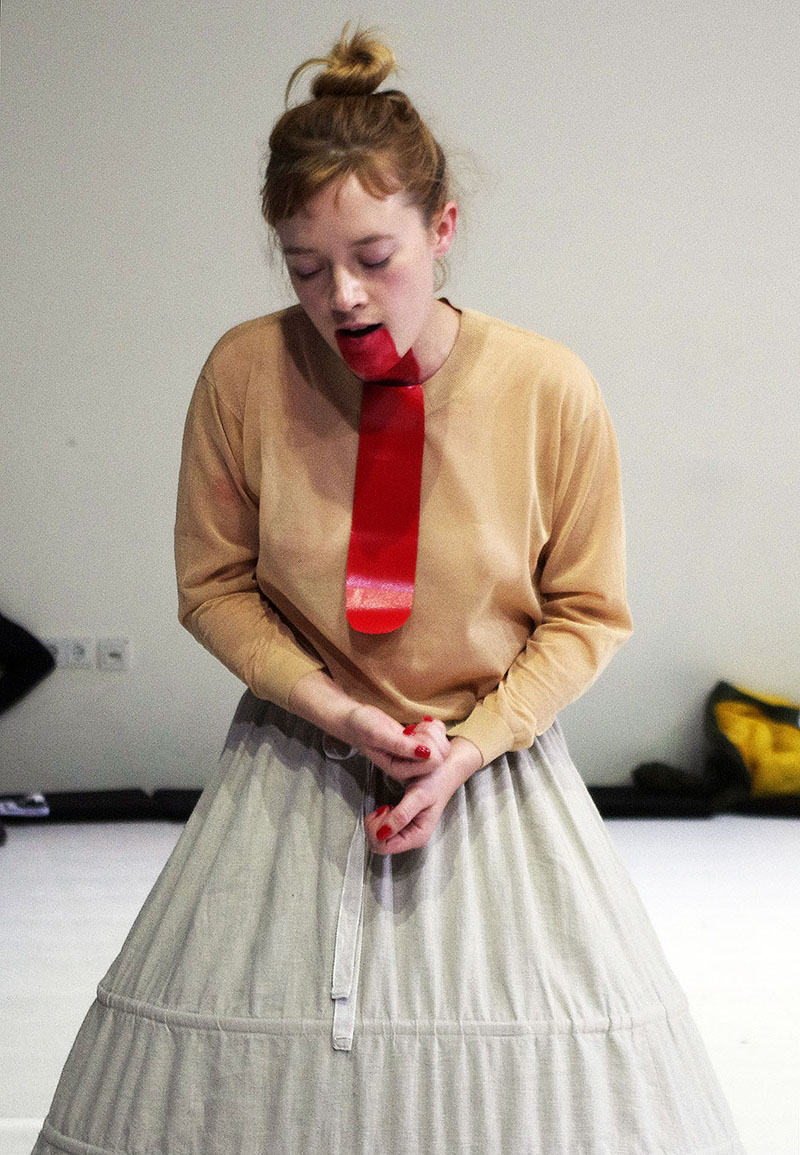 KS: Humor. I think humor is a lozenge for many ills because you can acknowledge things without going into some form of attack. Humor is a sort of social lube for talking about things that are really painful. This is a fun, weird, and overloading piece but it’s not without the fundamental conviction that it’s just song and dance or that song and dance is the only thing that’s left to us anyway.