A swipe, a like, a slippery DM. Algorithms accompany Reichenbach’s theories in probability and chance, as Duchamp’s readymades are injected into the matrix. Any bodily desire articulated in a character defined limit can be solicited and obtained in the time it takes to connect Facebook to your new dating app. The underbelly of the internet cultivates taboo ideologies while fetishes are commodified as casual encounters. Every facet of personal interaction is preordained by community guidelines, chatroom moderators, and corporate Peeping Toms. The casual, the discrete, and the kinky are increasingly formal.

‘Formal Encounters’ is a group exhibition of policy challenging juxtapositions that speculate calculated instances of commodity in its most forbidden forum. Berlin Art Link spoke to curator Ben Lee Ritchie Handler about the current show at Bucharest’s Galeria Nicodim. 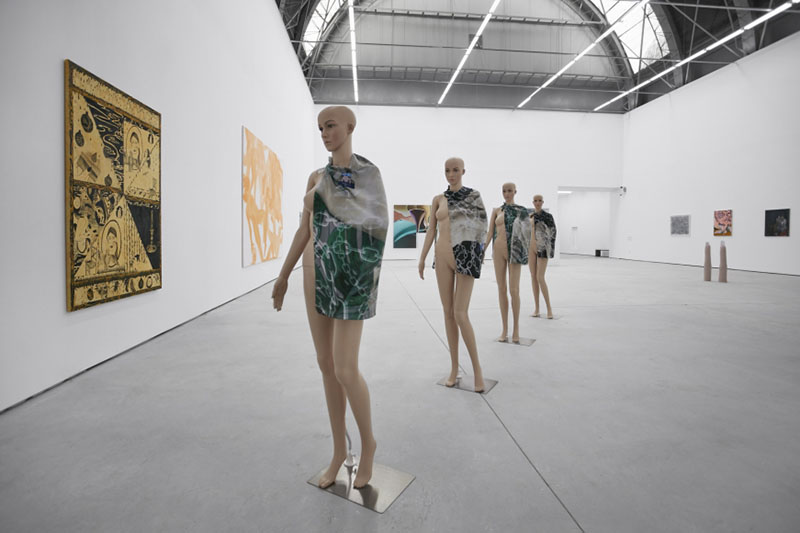 Sara Clarken: First and foremost, who is Craig? What is / was ‘Casual Encounters’, and what about this hub inspired you?

Ben Lee Ritchie Handler: Before Amazon, Facebook, Tindr, Grindr, et al, there was an all-enveloping online marketplace called craigslist, started by a guy named Craig in San Francisco. The personal ads were just a small part of it; craigslist was almost exactly like the classifieds in the back of a newspaper, except wherein one could receive immediate satisfaction. Say you wanted a bicycle fixed, but could only pay in banana bread. You’d post an ad that said as much to the site, and you’d receive replies by parties who could fix bicycles and loved banana bread via email almost immediately. 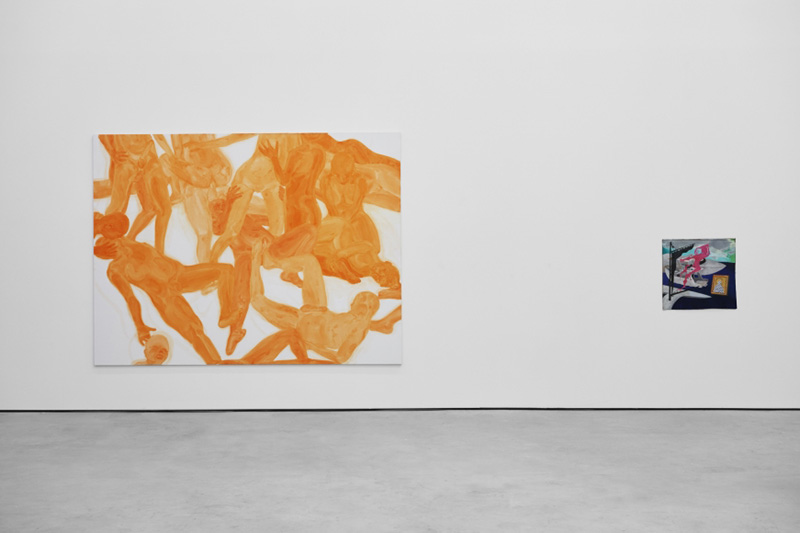 I’ve always enjoyed looking through Casual Encounters—it’s such a uniquely public glimpse into people’s private lives, but also extraordinarily superficial. In the ads, people distill their needs down to a few sentences, and viewers take them or leave them based on how well these minimal portraits comport with their own longings. The viewer is forced to apply a sort of formalist view of art history to human desire.

With ‘Formal Encounters’, visitors are presented with figurative artworks that deal with specific facets of sexual desire in an antiseptic ‘marketplace,’ not unlike craigslist. Of course, beyond the formal aspects of each piece, there is a significant history or backstory that lead to their creation, drawing the viewer away from a formalist reading, but that requires a bit of effort and a prolonged attention span on the viewer’s part, one that is not encouraged by contemporary means of online consumption. 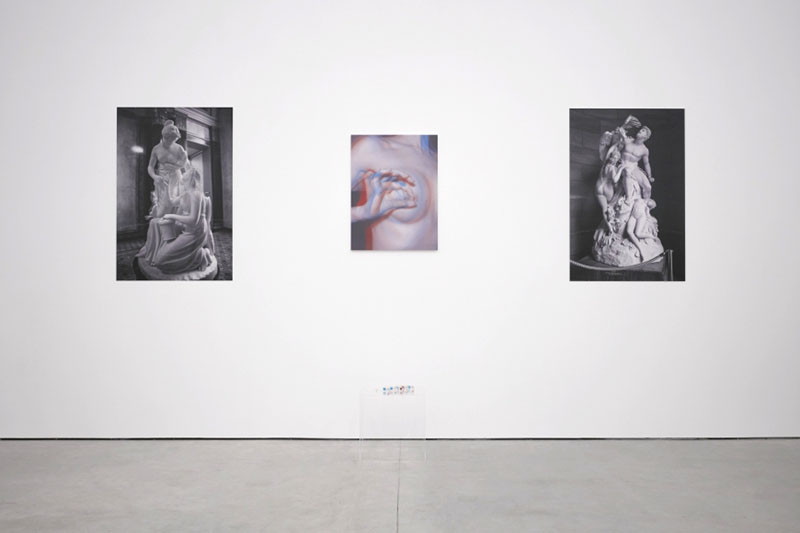 Upon entering the exhibition, the viewer is immediately confronted with Ciprian Muresan’s ‘All the images from the Balthus Catalogue Raisonne’, 2017–18, in which the artist literally recreates every one of Balthus’s paintings on a single piece of paper; Aura Rosenberg’s large-scale lenticulars, which reveal images of the Renaissance sculptures ‘Prometheus’ and ‘Ceres and Proserpina’ when viewed from one angle, and images of figures from porn photos in identical positions as the viewer walks past; and Lou Cantor’s ‘Portrait Présumé’, 2018, which is a 3D rendering of the most, erm, titillating part of ‘Gabrielle d’Estrées et une de ses sœurs’ from the 16th century. According to new Facebook and Instagram “community standards”, images of any of these artworks could be taken down, regardless of cultural import or references—we are living in a formalist world.

When we try to divorce artwork from the context in which it was created, cultural objects become indistinguishable from pornography, just as it’s easy to label much of the listings in Casual Encounters as ‘deviant behavior’ when read without knowledge of what led a person to post there in the first place. (It should be noted that Casual Encounters itself was shut down in the States this week due to new, Trump-era sex laws. Casual Encounters is still online outside of the US.) 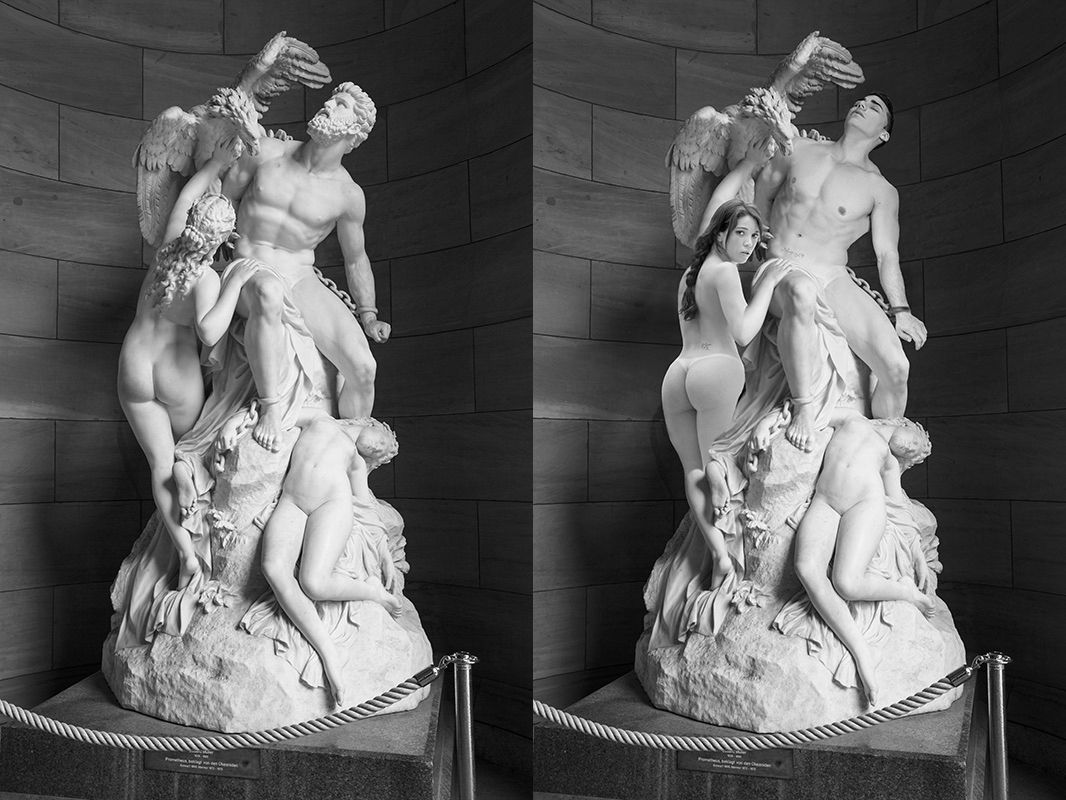 SC: This is your Balkan curatorial debut! Aside from bringing your energy to Nicodim after recently being appointed Director, why was it important to present the ideologies surrounding surveillance and desire in Romania?

BLRH: Romanians born in the 1980s and before grew up under Nicolae Ceaușescu’s oppressive Communist regime, in which they were under constant surveillance (or the threat of surveillance) by the government. Galeria Nicodim’s first space in Bucharest was located in a former palace of the regime: the kitchen contained the remnants of wiretaps on every phone line in the vicinity. When Ceaușescu and the Communists used their spyware to enforce party loyalty and squelch dissent, its omnipresence was a dark cloud that hung over every aspect of daily life. With contemporary networking software, it feels much less sinister; most of us readily consent to “community guidelines” and “terms of service,” in which we voluntarily cede our most private information—from where we’re eating dinner to whom we’re fucking—just by carrying a smartphone around with us. 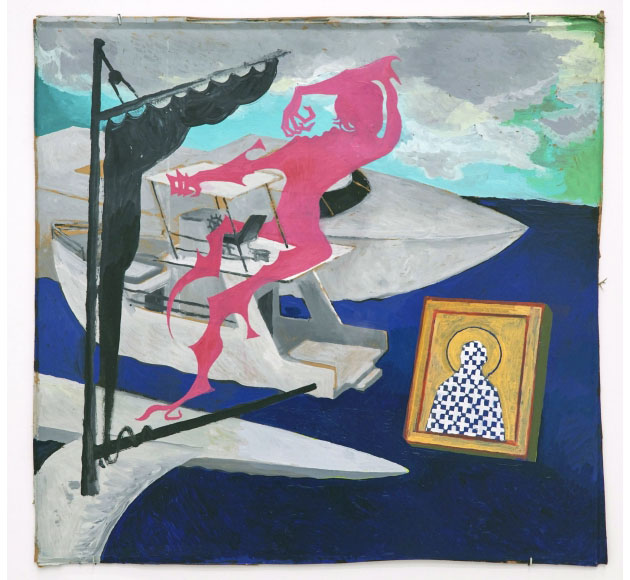 A million people have written about this already, but while this corporate-Capitalist surveillance has enabled us to become more connected to one another, most of our interactions have become decontextualized, formal encounters that are devoid of the deeper, more soulful stuff. Mi Kafchin‘s ‘In the Intimacy of the Spacecraft’, 2018, provides a lovely allegory for all of this: a solitary, gender-fluid figure in a high-tech spaceship surrounded by computers, star maps, weapons, and beyond that space, takes a knife to their own genitals.

SC: An assortment of mediums fill the former factory. Anna Uddenberg’s pair of oversized fingers, Aura Rosenberg’s lenticulars, Lou Cantor’s silk scarves and Daniela Palimariu’s interactive sculpture stood out while remaining in dialogue with the impressive collection of paintings and works on paper. The body is an obvious necessity in discussing the privately-public attributes of seeking relationships online, but how do you feel the audience activated these specific works further?

BLRH: For those of you who aren’t able to attend the exhibition, the first room is filled with what could be considered a selection of encounters for which one might be searching. Do you like fingers? Anna Uddenberg has you covered. Feet? We’ve got Genesis Breyer P-Orridge and Katherina Olschbaur ready to walk all over you. Butts? There’s Jessie Makinson. Group situations? Philipp Kremer, Jamie Felton, and Daniel Pitin are all about it. While the works themselves can be flirty and kinky, the presentation is cold and clinical, like a drop-down menu. 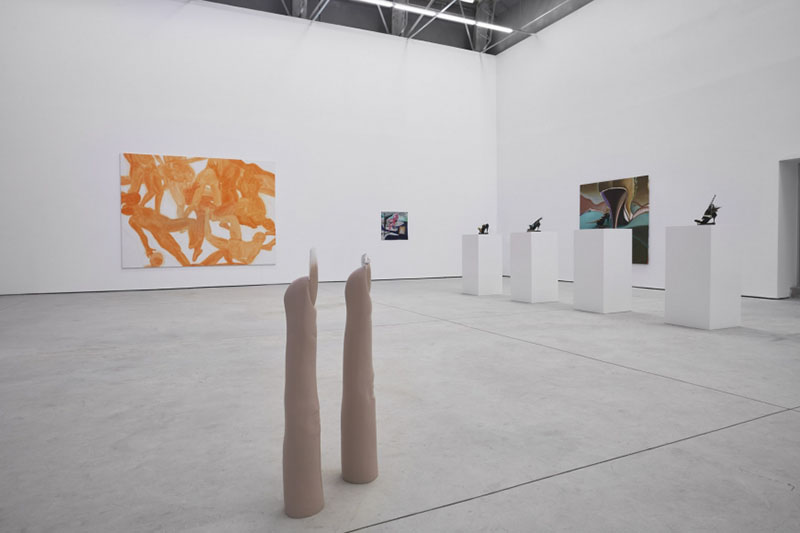 All this breaks down in the second room, which has been transformed into Daniela Palimariu’s ‘Small Accidents Café’, 2018, an actual café setting for which Palimariu designed semi-functional modernist furniture. The ‘semi-functional’ aspect is intentional: all the seating and surfaces are curved to force organic interaction between attendees by way of spills or collisions, to pop the bubble of single-service interactions fostered by the first room. It seems we only really personally interact with one another nowadays by accident. Palimariu’s installation within the second room is a physically jarring reminder of what is missing from the first, and living, present bodies are necessary to activate these situations.

SC: How has the queer community of Bucharest influenced your curatorial vision?

BLRH: I’ve only been there about a month of my life total, but my entire perspective of Bucharest has been shaped by its incredibly deep and vibrant queer community. I’ve become infatuated with the local DJ/performer Paula Dunker: on any given night, they’ll be DJing in drag, shouting free-form poetry on top of hardcore electronic music while a gender-fluid coterie of mostly undressed sequined dancers pulls shapes around them. There are great bars and restaurants. Everyone is inclusive and welcoming. 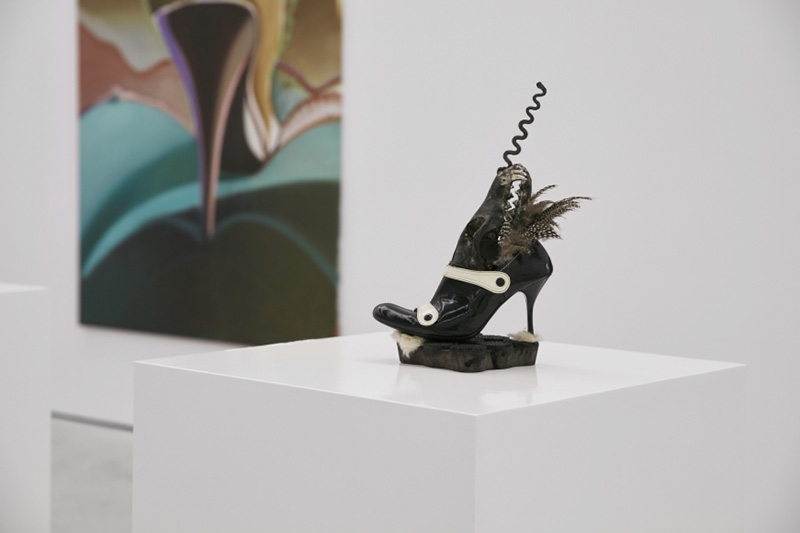 Something I didn’t consider while creating the show is what a relatively privileged position queer identity holds in places like Los Angeles or Berlin in comparison to Romania. In Los Angeles, queer identity art has become so accepted that we simply call it “art.” In Bucharest, however, the presence of one or two overtly sexual pieces by queer artists in a show is a radical or charged act in and of itself, which will lead some to read it as a queer exhibition. (Check out this review in Revista—Arta). While the Revista—Arta critic wanted the exhibition to demonstrate the “baggage that comes with the socialization [of queer identity] into [the Romanian] traditionalist environment,” she was inadvertently furthering one of the central questions of ‘Formal Encounters’: is there room for personal identity outside of our solitary spaceships with the way we currently consume art/sex/whatever? In Bucharest, at least, it seems the answer is “yes.”

SC: Will there be another activation of ‘Formal Encounters’ in the near future?
BLRH: My next curatorial venture with our Bucharest gallery opens June 16th. It’s a group show titled ‘The Adderall and the Ecstasy’, and it’s a chemically-updated riff on the Irving Stone novel ‘The Agony and the Ecstasy’ and the eponymous film starring Charlton Heston as Michelangelo. The title itself has become such a hoity-toity cliche for the cycles of creation—it’s been self-seriously abused by everyone from Damien Hirst to Kanye West—that people forget that the source material is so hilariously camp. ‘The Adderall and the Ecstasy’ can easily be interpreted as a sequel to ‘Formal Encounters’; it’s about the struggle to establish physical identity and community in a post-physical world, amongst other things. 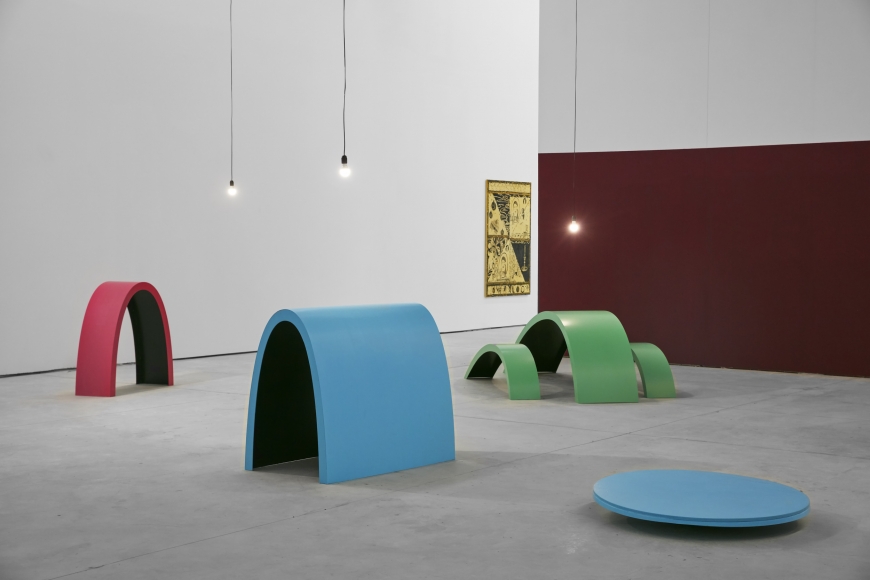 SC: Do you find any similarities in scouting / acquiring art as one would seek to fulfill their fantasy on a classified forum?

BLRH: Having worked at a blue chip megagallery prior to Nicodim, I have witnessed wealthy collectors describe their ideal artwork in terms of price, height, width and palette, then sick their sales person to hunt it down, regardless of who the artist winds-up being. I myself have found works for exhibitions based on Instagram images, and sold artworks from emailed jpegs and 140 character descriptions. The convenience economy is all-encompassing. We are all searching for satisfaction online in one way or another.