Walking into Heiner Franzen’s bright and spacious studio is like entering into a huge version of one of his drawing room installations. Rather than finding a series of singular works, the whole studio appears like one giant ongoing installation with evidence of Franzen’s working style everywhere. Line drawings, paper cutouts, film still images, sculpted objects, and swatches of various coloured materials cover the walls like the clippings and clues of an obsessive investigation. Outside in the Uferhallen studio complex in Wedding, it’s snowing and peaceful, but inside there is the energy of an artist with a busy mind and a practice that keeps him moving. 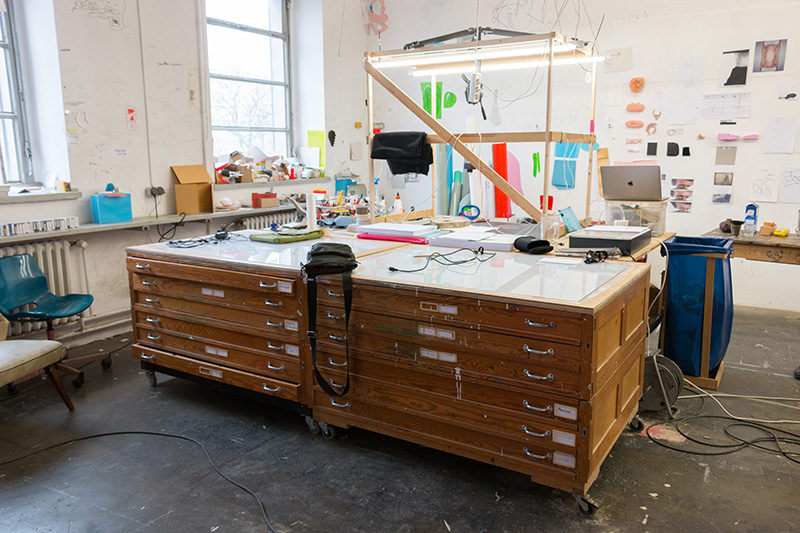 Franzen’s drawings are a language all his own. The cartoonish doodle style drawings bear some recognisable features, and his collages and video loops use recycled images, but ultimately they describe Franzen’s way of processing the snapshots from life and from visual culture that linger in his mind. Pointing to some partially abstract figures drawn directly onto the wall, Franzen explains, “I call these characters. Which means certain figures that stand for something, for a memory or for an accident, an argument with a friend. I make a short sign, and for me it’s not abstract; it’s more a fragment, and then I can use it to turn into a real figure.” Franzen is a trained draughtsman, but drawing for him seems more like a way of life. He draws everyday. Memories and images that get stuck in his mind are processed on paper and instead of trying to make sense of why, he is compelled to explore them further and with new mediums. 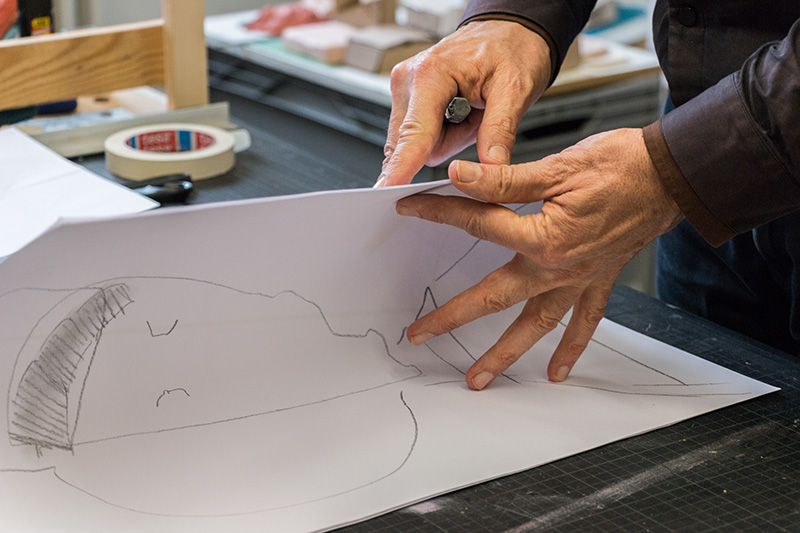 The lines between mediums are blurred and become inseparable in Franzen’s practice. He moves fluidly between drawing, cutting and pasting, building, filming, and editing, as required. Crates and boxes full of materials are positioned at the ready around his studio to be put into use as an idea takes shape. “All of a sudden I have to make some small sculpture, object, or photograph. The way my studio works, I’m very quick to change the media. I have no film team. I work on my own, and I can react very quickly to what’s happening in front of me.” It is easy to imagine Franzen working, at a fast pace, with bursts of movement throughout the studio. 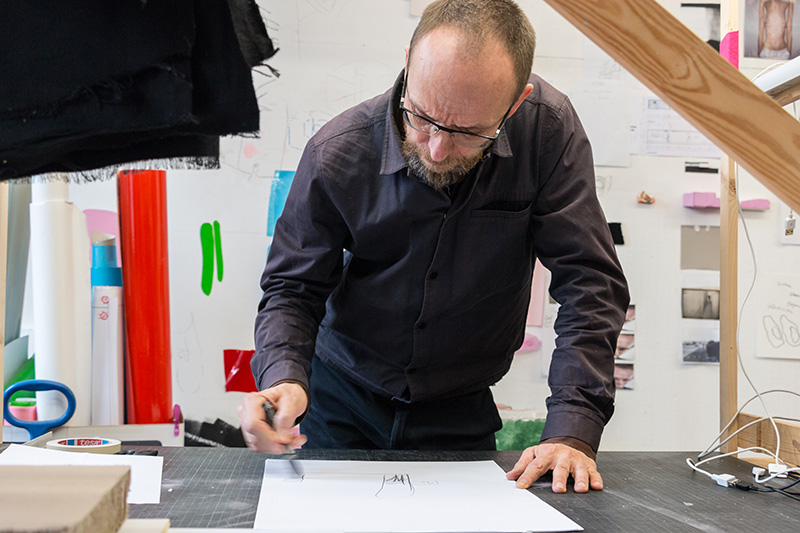 Franzen has a passion for, even an obsession with, film. Stills from well-known films—’Terminator 2′, ‘The Shining’, Pasolini’s ‘120 Days of Sodom’–make their way into his collages and videos. Some sculptures and installations are, themselves, like giant film projectors. His work is often described as being like a projection of his mind, pen tip acting as the moving image. In ‘Kartenraum’, 2014—a series of live drawing performances where Franzen stood inside or behind a fabric screen—his drawing became an animated story happening in real time. “I’m not so interested in narrative where there is 90 minutes of something happening, it’s more about how one central image works in my brain. My videos are always loops, because I’m interested in how time works for us.” In his exhibitions, viewers move through a network of clues and fragments, piecing together their own narrative as certain shapes, figures and film images speak to them or trigger a memory. 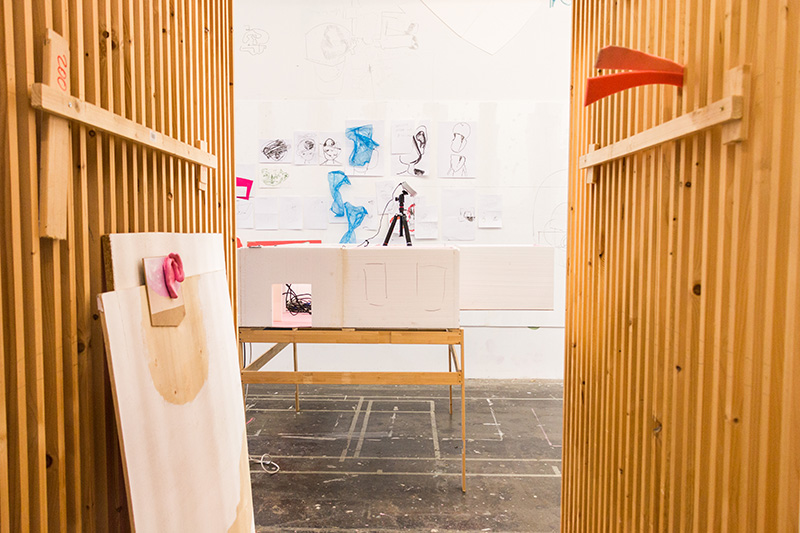 One of Franzen’s aims is to reconfigure the way people view and move through exhibition spaces. “When I work on a drawing, I’m interested in definition of space”. Franzen builds rooms within gallery rooms, changing the dimensions and disrupting the regular path through the spaces. “As I move here in the studio, I also try to move the spectator”. His installations are brightly lit and confined, like being thrust into a light-box where his memories and meditations surround you on all sides. One such installation now stands in his studio, always in a state of production. For the installation ‘Bliev Wech Van Mien Gerechtigkeit’, 2013, Franzen built a tunnel 20 meters long, conjuring images of the spooky corridors of horror films. “The spectator could walk into the tunnel, see the fragments and add to his own personal story. You walked into the room and were blinded by bright neon lights, as if you walked into a screen. It was very important that it were as if you walked into your own movie.” 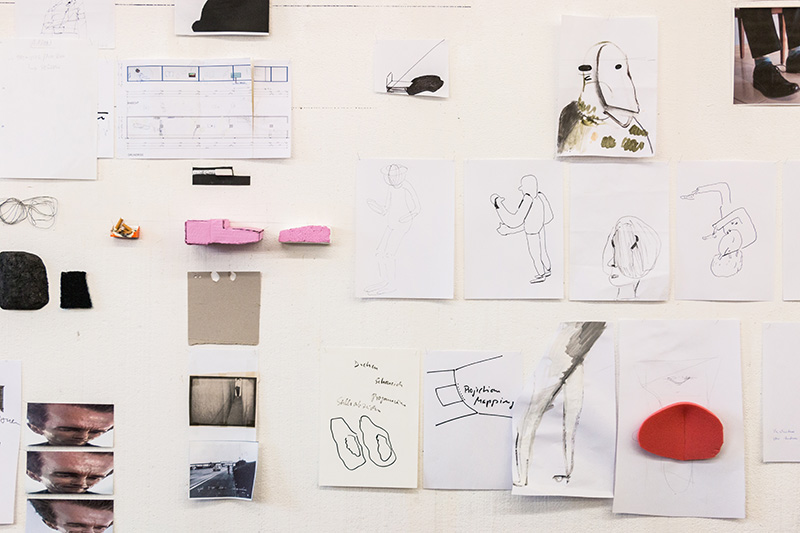 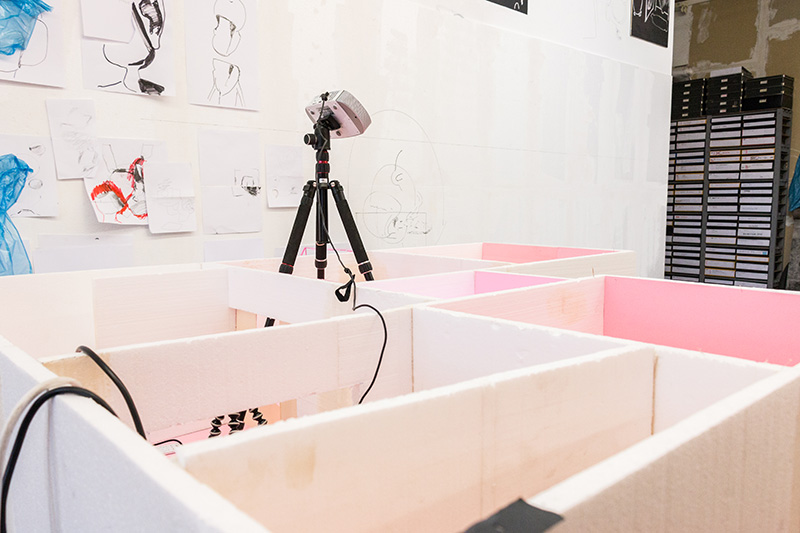 In the middle of Franzen’s studio is a 1:10 scale model of the exhibition rooms at Haus am Lützowplatz for his upcoming exhibition. The walls are bright pink and some curve dramatically to meet the floor. “The halfpipe structure was my first impression at Haus am Lützowplatz, because I knew I wanted to change it into something unrecognisable, where the wall ends and the floor starts.” The video projections will encroach into the viewing space, where wall and floor no longer separate viewer and artwork. Breaking the fourth wall of the gallery and his staging of movement harks back to hours of training spent doing live drawing in a theatre, and links to a broader aim to stage new viewing experiences in a time when we experience the world largely through screens. 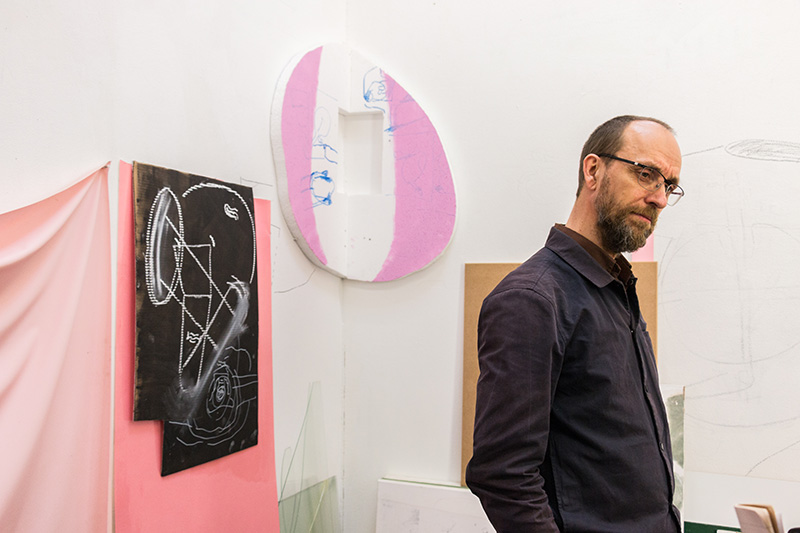 “We are drug addicts,” Franzen says about our screen-obsessed culture, “and an artist has the privilege to deal with these drugs and try to put it into their material, maybe not to make a better world, but to show a different viewpoint. I think we are losing a lot of viewpoints at the moment.” When exploring a new drawing or video idea, he doesn’t set out to make social commentary, but inevitably art reflects life. Franzen uses reconstruction in his exhibitions to disrupt the viewing experience.