Mona Hatoum’s most recent exhibition, ‘Terra Infirma’, destabilizes universal notions of home, displacement, and global conflicts. After its premiere at The Menil Collection in Houston, the artist’s first American survey show in over twenty years travels to the Pulitzer Arts Foundation in St. Louis. Its title negates the Latin terra firma or “stable ground.” Similarly, the work defamiliarizes common objects and materials amidst our increasingly violent, volatile, and hyperbolic political climate. From enlarging kitchen tools to creating textiles of human hair, Hatoum reimagines the everyday on symbolic and material levels. 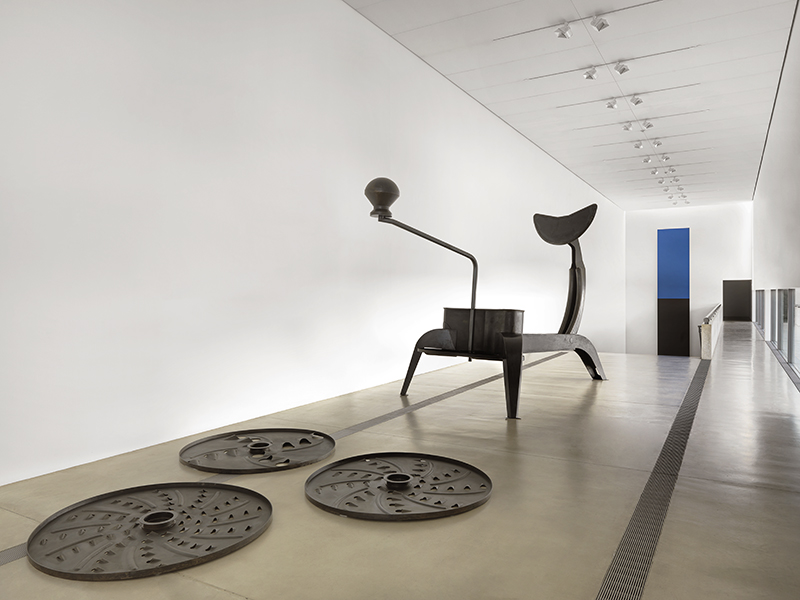 Hatoum subverts traditional notions of domesticity: in the household and territorial senses of the word. In ‘3-D Cities’ (2008–10), she laser cuts circular concave and convex marks to intervene with maps of Baghdad, Iraq; Beirut, Lebanon; and Kabul, Afghanistan. While these abstract shapes could note architectural or military destruction, the artist – born into a Palestinian family in Beirut and working in London – resists a literal reading of the work.

“I always try to tell people not to over-interpret my work in relation to my biography,” she told Berlin Art Link. “In my work I use abstract forms and aesthetics to convey the meaning. I’m not trying to speak in direct terms about my own experience, I’m trying to make it more universal. I don’t like it when people narrow it down to being just about the conflict in the Middle East: it can relate to any conflict, displacement of people, or restriction of movement all over the world.” 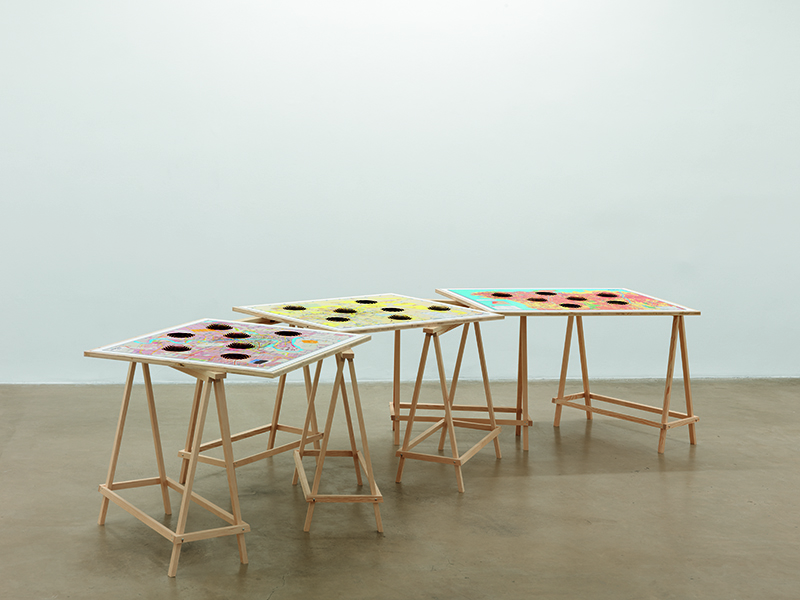 “People very often say, ‘Did you put that circle where the bombs went off?’ I’m not a researcher. I’m not someone who goes around and tries to make an exact didactic survey of the events, because if I wanted to do that for Beirut, the whole map would be destroyed by these things. I’m not someone who is trying to illustrate what has happened in Beirut because so much has happened.” Maps, a frequent motif in Hatoum’s work, function better as objects of intervention in ‘3-D Cities,’ rather than generic symbols of globalization in ‘Projection (Velvet)’. 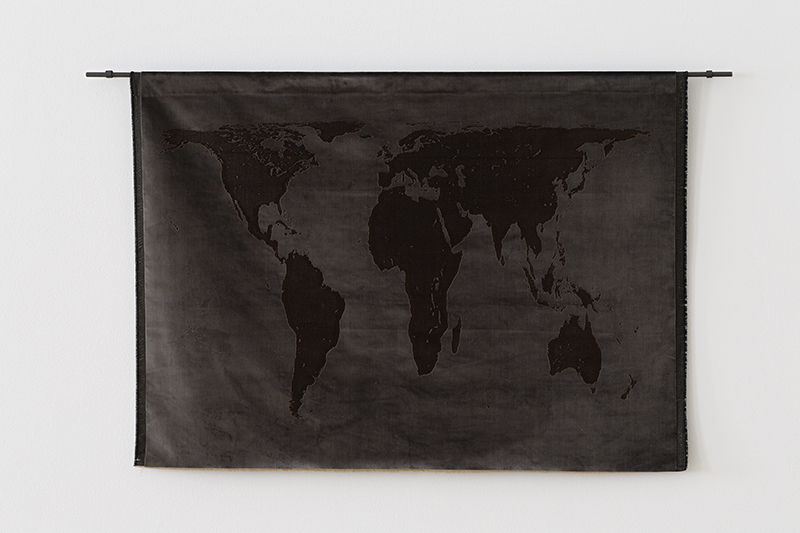 While The Menil’s permanent collection highlighted the Surrealist influences of Hatoum’s practice, the Tadao Ando-designed Pulitzer Arts Foundation building articulates the minimalist facets of the work. Tucked away in an intimate square gallery on the first floor hangs ‘Impenetrable,’ a suspended cube of over 400 hanging barbed wire rods that create a wintry forest of barren bark. The levitating dangers of the cube pose a physical threat to the body of the viewer, recalling the restricted movement of people across borders and conflict zones. The wires tempt transgression by flaunting a direct view into the interior. With heightened danger, the work draws inspiration from Venezuelan artist Jesús Rafael Soto‘s 1960s ‘Penetrables,’ tactile environments of suspended plastic strands. 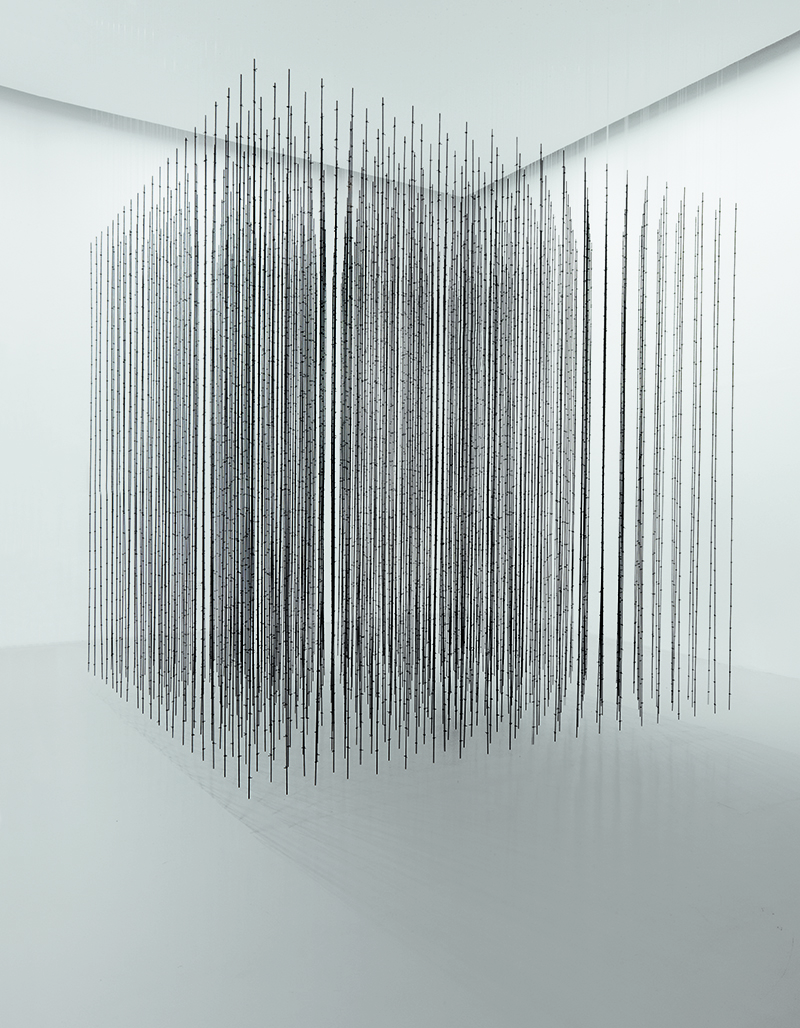 One of Hatoum’s most powerful strategies is amplification. Her works personally confront the viewer in the intimate galleries of the Pulitzer. Inspired by a visit to a Philadelphia penitentiary, Hatoum recreates the bunkbeds found in barracks; instead of constructing two beds on top of each other, Hatoum stacks five, positing the beds as cages and evoking the institutional violence of the prison system. The sterile quality of these objects makes them haunting. Hatoum employs quantity in the objects’ magnitude to affect quality in their disposition.

Hatoum’s most potent tactic is scale shift, hearkening to the Surrealist notion of the uncanny, in which the everyday acquires a threatening quality. ‘Grater Divide’ presents an ordinary kitchen grater at 9 times its size. Creating a paravent – or divider – the corporeal scale confronts the body of the viewer. Replete with entendre, Hatoum’s titles provide an entry point into the meaning of the work but are chosen after the objects’ completion. Often employing humor to deflate the overt political issues that the work touches on, the artist is “not interested in political propaganda.” Her artworks tackle domestic references to the kitchen through materials that recall the many heavy metallic sculptures made by men, like Richard Serra, in the 1960s Minimalist movement. 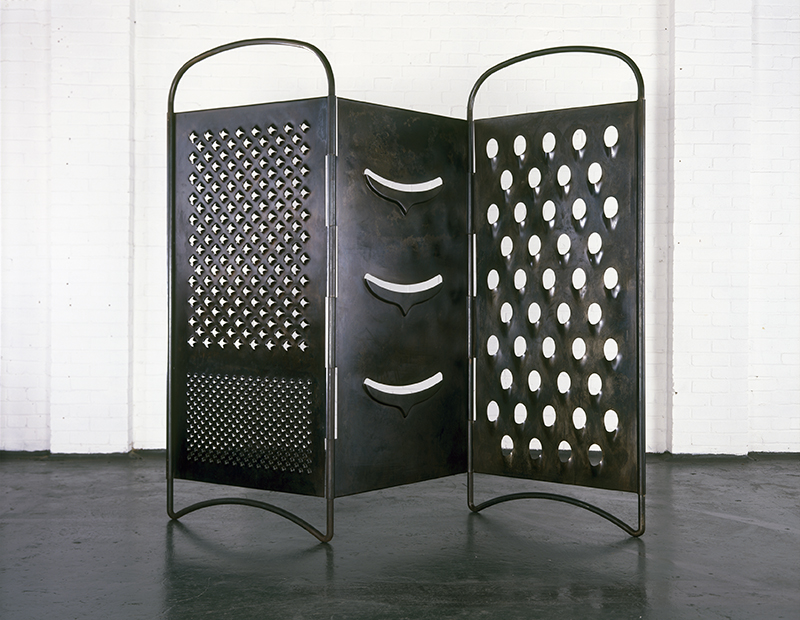 As the exhibition draws to a close, an electric hum seeps into the final galleries from its coda, ‘Homebound’. In an installation of circuited kitchen utensils and household furniture linked by wires, Hatoum electrifies ordinary steel objects to make them dangerous. A scene of these domestic objects independent from human interaction, the work evokes another facet of the uncanny, as when a child thinks that in their absence, his or her toys become animated at night. Despite the horizontal steel wires preventing visitors from entering the space, viewers may imagine their own electrification. In Hatoum’s own words: “We have already quite a relationship with these objects through the body, giving us support and comfort, you always project yourself there even if the body isn’t.” 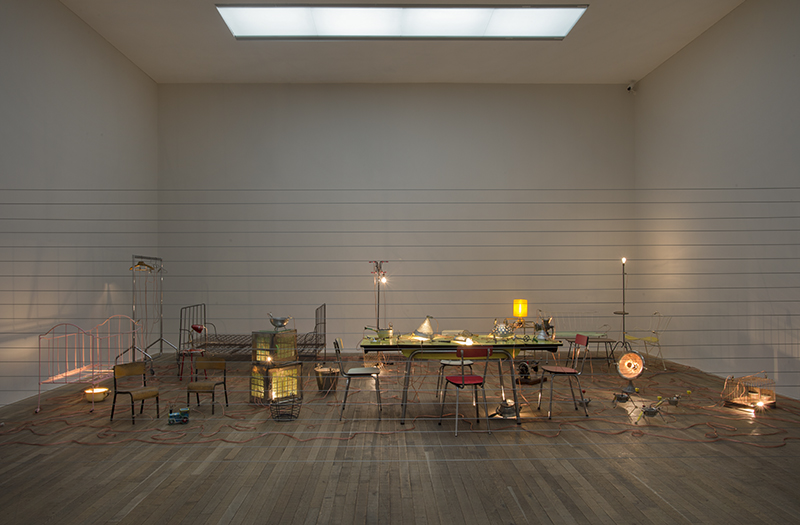 For the first time since 2014, Hatoum may be ‘homebound’ herself. After several consecutive touring surveys, the artist says she looks forward to the opportunity to return to making work, most of which she creates during residencies. Hatoum’s devotion to her exhibitions pays off: ‘Terra Infirma’ is simultaneously threatening, electrifying, and comforting. At the Pulitzer Arts Foundation, Hatoum’s work has room to breathe, confront, and disrupt.