The future arrived in a taxi. ‘Eva & Adele.’ Always written with the ampersand uniting the two names. Ambassadors from another world, the self-declared hermaphrodite twins descended on Berlin from a spaceship in 1989. For nearly thirty years, neither has appeared alone in public, much less out of character. Whether at the grocery store or Art Basel, they wear the same clothes, stick to the same script, consume the same food and, perhaps most importantly, share the same invented gender, a sort of hybrid that cannot be labeled either female or male. With their clean-shaven heads, crimson-stained lips, purple and teal-shadowed lids, they indeed struck me as otherworldly, an impression deepened when they stepped out of the cab. Wearing matching pink-and-red vinyl coats emblazoned with their own smiling faces framed by a heart, they flashed me camera-ready smiles that were perhaps a bit performative, but no less bright or sincere for it. They were right on Berlin-time: fifteen minutes late. I had arrived in front of their Charlottenburg atelier and residence just a few minutes before, eager to meet them, to get a glimpse into the domestic side of the world’s arguably most original, most committed, collaborative work of art. 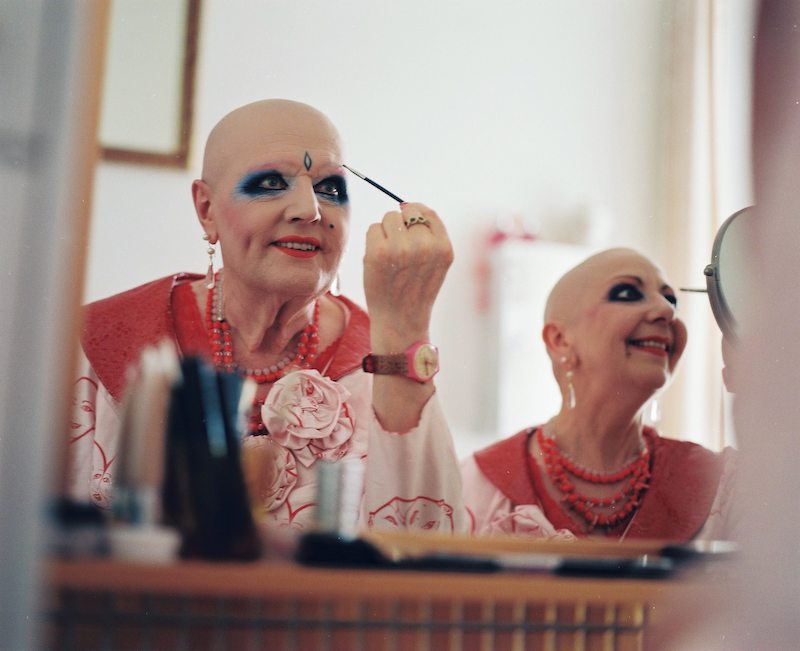 They apologized for their late arrival. They had already had a full day behind them and still more to come after our visit. The immediate cause of their tight schedule is ‘L’Amour du Risque’, a retrospective of their work on now through August 27th at me Collectors Room in Berlin. Alongside their videos and photography, sketches, drawings, and sculptures—a majority of which feature none other than Eva & Adele—are rooms devoted to documentation of their image in the media and of their public lives as Eva & Adele, including their costumes and clothing logbooks. 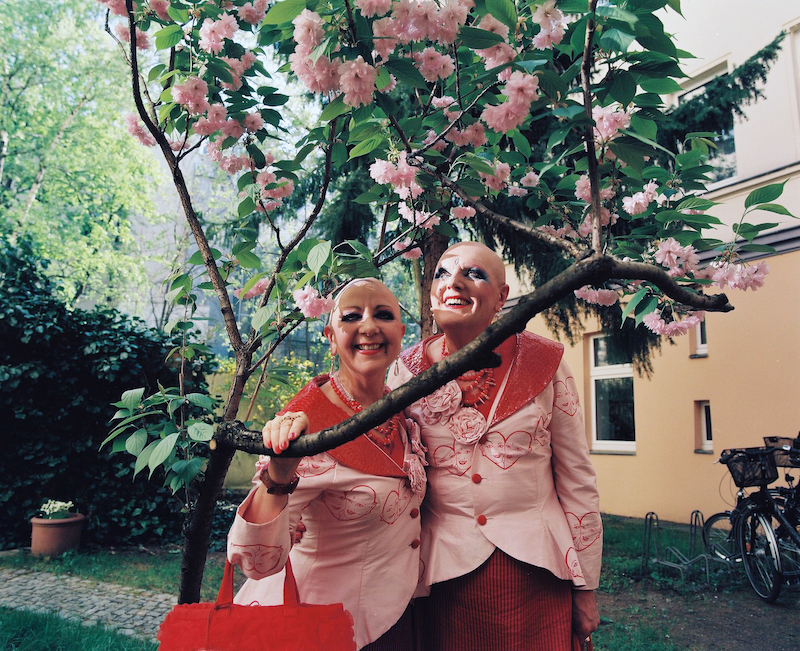 Our tour of their private sphere began with cherry blossoms. Was it Eva or Adele who pointed out that it might be fun to shake the branches of the cherry tree growing in the middle of their courtyard, to make a little snowfall in spring? Watching them stand beneath the branches in their identical ensembles, delighting together in the rain of pink blossoms, I caught myself wondering: where does Eva end and Adele begin? How far do they take their commitment to living as one for the rest of their lives? It’s one thing to dress alike in public for the sake of a performance, but it’s another all together to truly merge identities, to give up one’s self for the sake of art. What drove them to such a life-long act of ego-annihilation in the first place? Leaving my reflections and the flurry of blossoms behind, we entered their three-floor flat. The top floor is the most domestic of the three, the place where they eat, sleep, and relax. The middle is largely devoted to the storage and display of their sketches and paintings, the bottom level to work. The first impression is that of order and intentionality. And above all white. Nearly all of the surfaces, from the ceiling to the floors are covered in a matte white paint that on the sunny day of my visit was nearly blinding in certain corners, imparting to the space a slightly institutional feeling, as if one were visiting a clinic or laboratory. 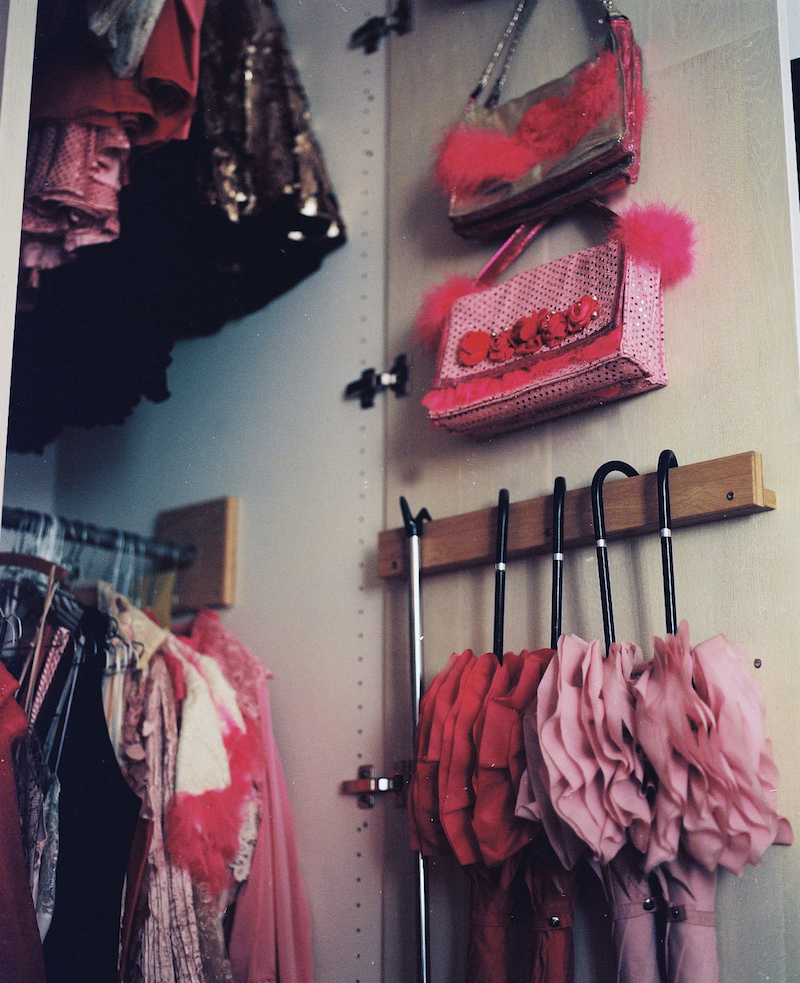 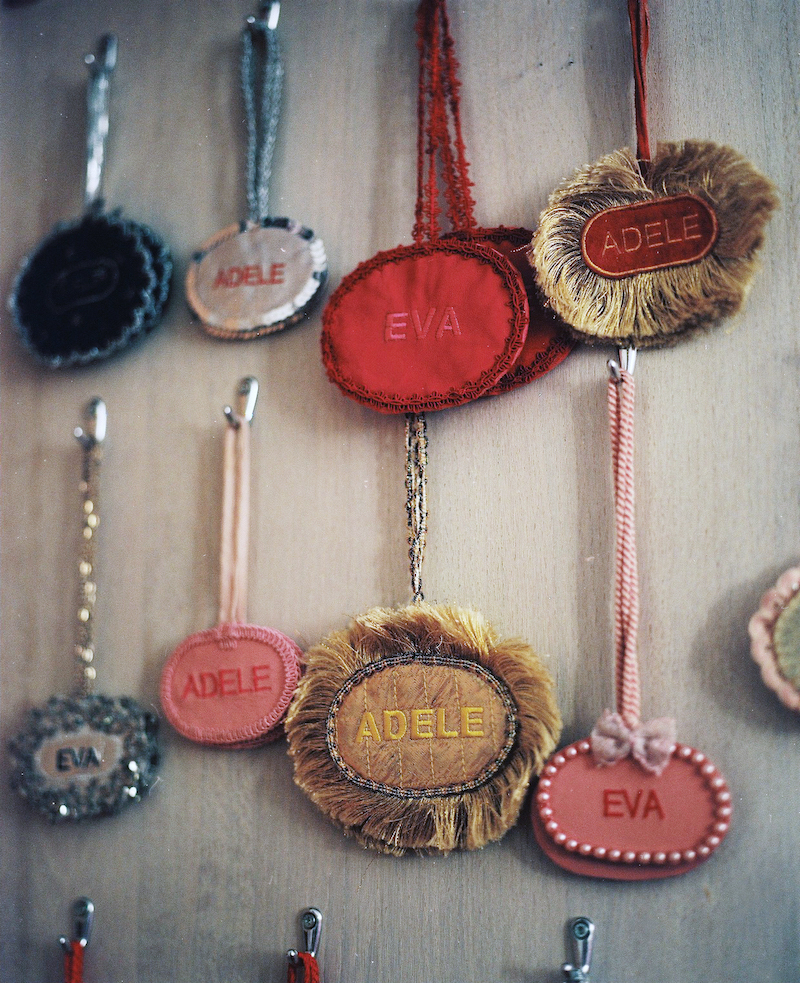 Once the metaphor of the medical or scientific institution had gotten into my head, it was hard to leave it behind. Tubes of paint, all the same size, in neat rows arranged by color and perfectly equidistant from one another, looked like lab samples, awaiting analysis. Fat-bellied, ceramic jars lining the window sills, filled to capacity with blond-headed paintbrushes of the same size and length, conjured associations with jars of cotton swabs and tongue depressors. Even the touches of eccentricity, like the rows of costume jewelry hung in parallel around an adjacent mirror, resembled creatures displayed for purposes of scientific study and classification, the baubles and gold chains, nailed to the wall like butterfly wings pinned into a collector’s vitrine. Was there a link between this evident love for order and their total commitment to this third person that they have created together, “Eva & Adele”? I suspected there was a connection. But I could not quite put my finger on it. When I tried to press them with more personal questions, they somehow found a gracious way to answer without revealing too much. Adept at the artful dodge, they are steadfast in maintaining the unity of Eva & Adele. Nowhere will you find more than a mere smattering of hints about their lives prior to becoming Eva & Adele. 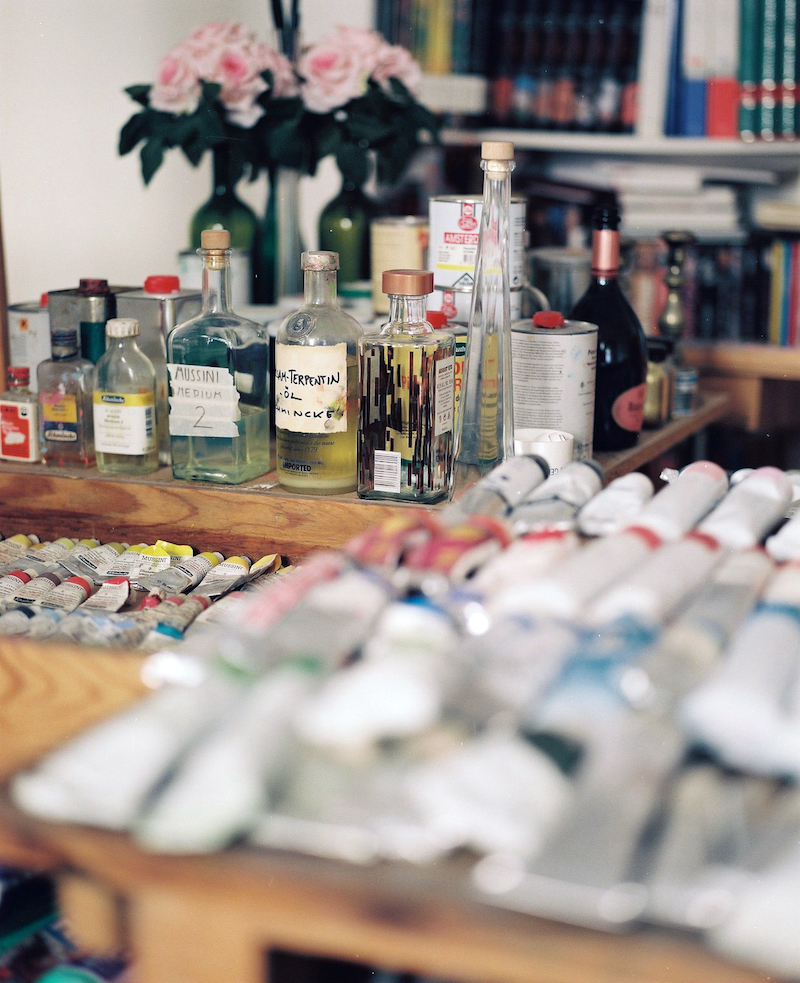 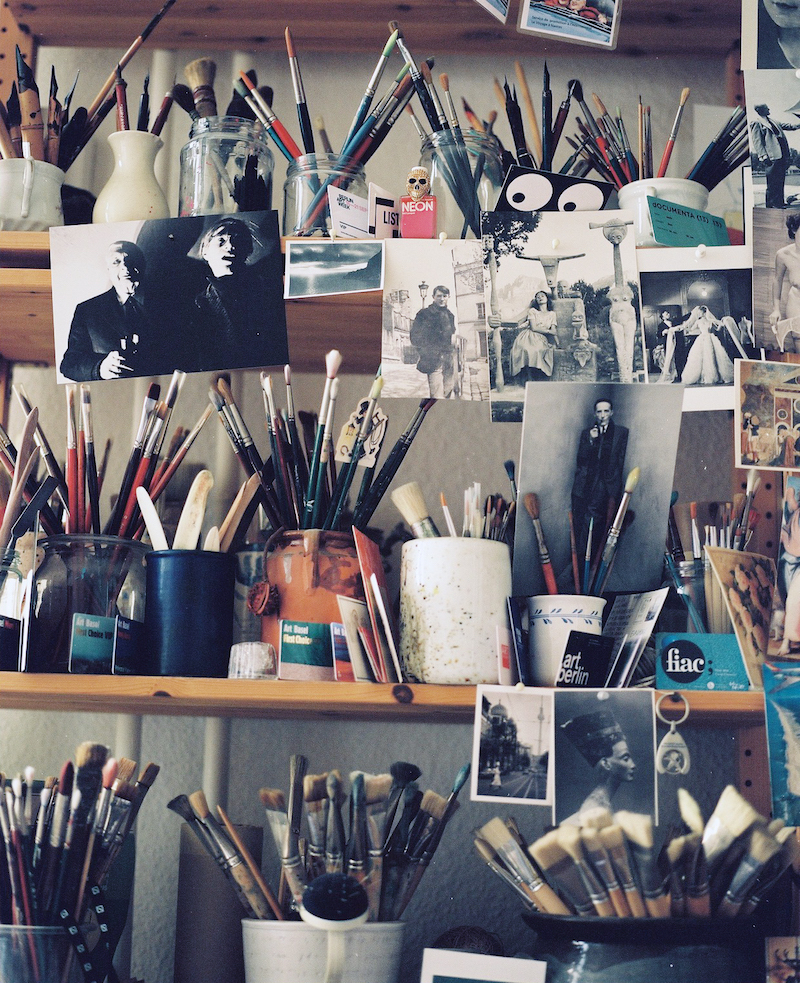 It does not take much to reveal, however, that behind the playfulness and sunny smiles, is a serious devotion to their project, one reflected not only in their space but also in their nearly monastic adherence to a daily morning ritual. Despite their peripatetic lifestyle—“art events are our platform,” they declared at one point—their daily routine seldom strays too far from script. They start each day by weighing themselves, followed by shaving, then by selecting their clothing, eating breakfast, and finally by applying their facial paint (“not make-up,” Eva informed me). All told, it takes about three hours to ready themselves for public consumption. For someone who barely possesses enough patience to sit to the end of breakfast, such a morning routine is hard to fathom. But for Eva & Adele this fidelity to “Eva & Adele” is their raison d’être, their mission. “Wherever we are is museum” is one of Eva & Adele’s catchphrases. They are, in other words, the show, a sort of traveling exhibition in the flesh. They exist to disseminate their image to the world, to broaden the horizons of the present by helping people imagine possible alternate futures, in which the transgression of the boundaries of gender and sexuality are no longer transgressive, a notion they refer to with another dictum, “Futuring.” 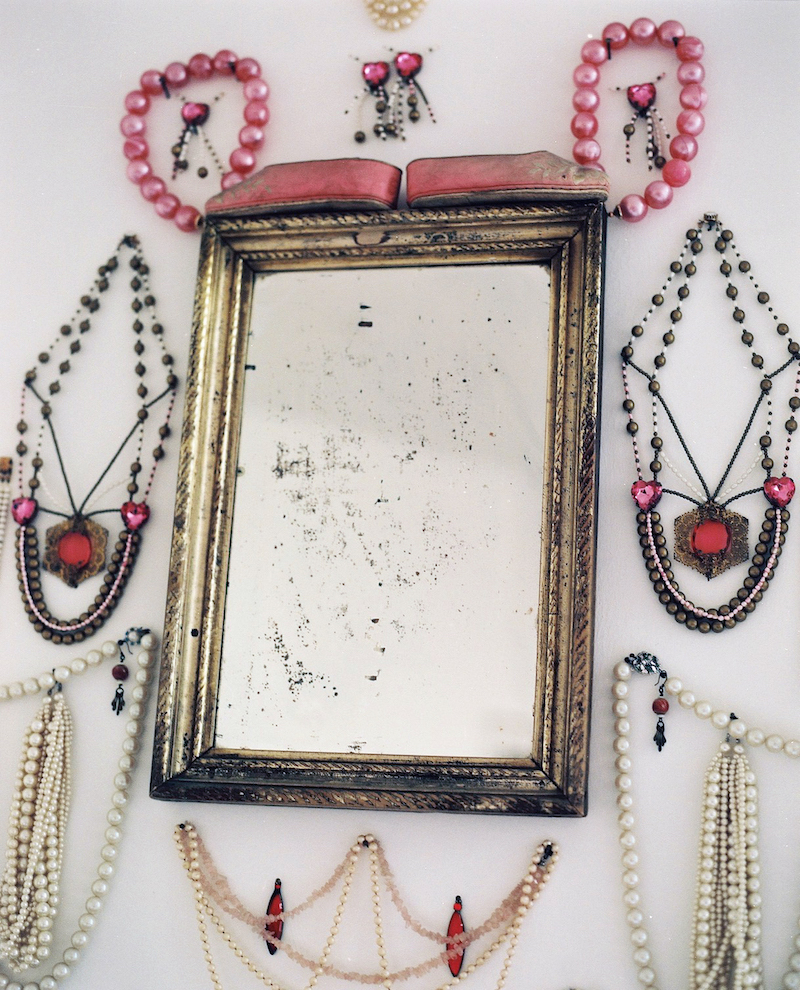 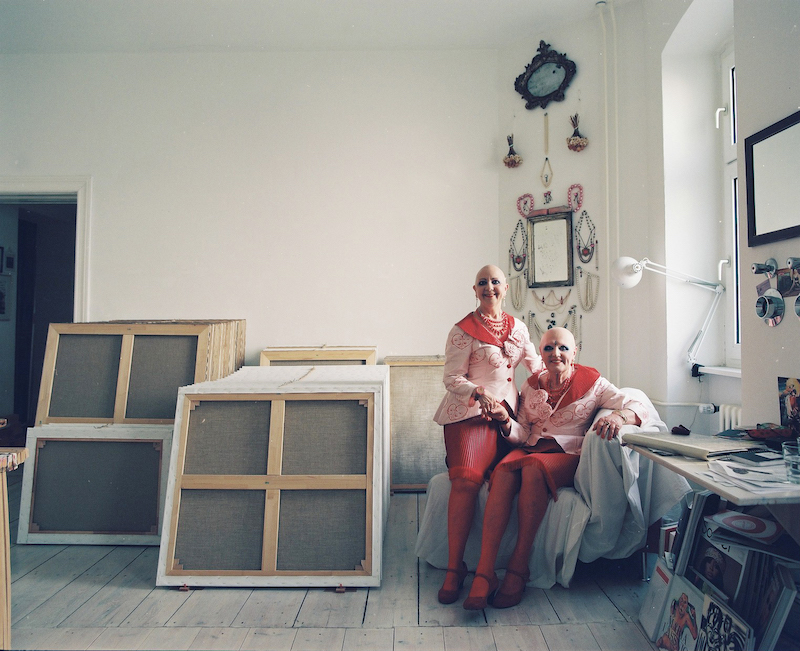 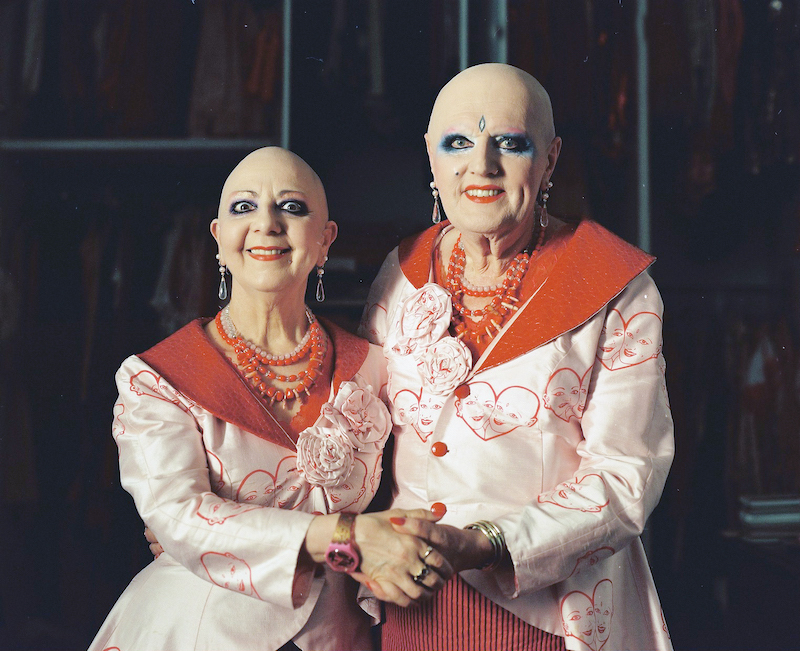 ‘L’Amour du Risque’ is the latest surface emanation of a genuine sea change in Eva & Adele’s fortunes and reception. When they first came on the scene, with a staged wedding at the Martin-Gropius-Bau in 1989, which preceded their own legal marriage in 2011—a right for which they had to fight, as it was important to Eva that she be legally declared female first—they made a splash in the media. But most of the art world turned up their noses at them, not considering them artists. The world was not yet ready for EVA & ADELE. The tide began to turn, however, a few years ago, beginning with increased sales and numerous gallery shows, and culminating with the major exhibition ‘You are my biggest inspiration’ at the Musée d’Art Moderne de la Ville de Paris in 2016. 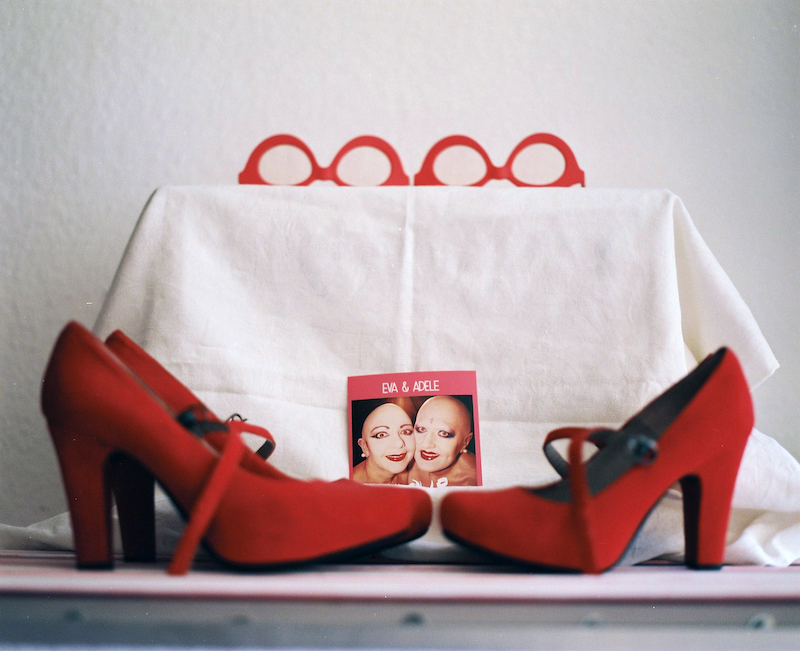 Before gamely returning to Eva’s side to pose for a photograph beneath their massive, beautifully ordered wardrobe, Adele tells me that they decided early on that “instead of changing for society, society would have to change for us.” Watching them pose for the photographer, arms around each other, their bald heads and broad smiles gently illuminated by the sun pouring in through the windows, I cannot suppress the thought: if Eva & Adele come from the future, then the future is bright indeed.