Glasgow International 2018 feels a bit like the city itself—colourful if rough, and a mess of good ideas. The frenetic energy of the festival, now in its eighth edition, could be read as curatorial neglect, though it also suits a city where three-storey Victorian buildings with broken windows abut squat grey boxes housing Natural Born Grillers: Cold & Hot Food. With 90 exhibitions and several hundred artists showing work inside an urban area smaller than the perimeter of Berlin’s ringbahn, there is a glut of shows — the best of which are of two kinds: selected solo shows by strong local galleries, and energetic collective and group shows by emerging artists. 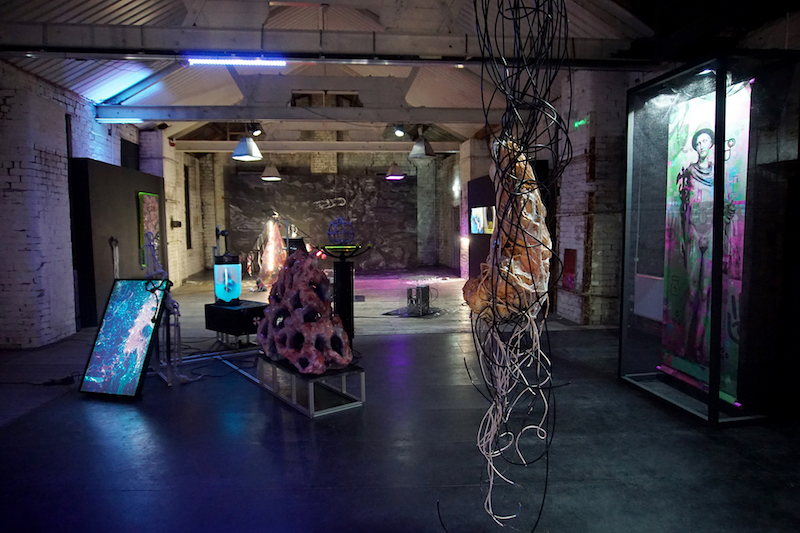 Director Richard Parry’s programme cites thematic starting points for the festival, found in the nine core exhibitions, including “identity, science fiction, and society in the era of the internet”. Ultimately, a very broad and safe set of themes encompassing much of the art world today. Certainly, fiction—in the form of speculative futures and a recurring interest in narration—is a common theme among many shows. Yet a clear pleasure in material explorations, form, and texture are present too, particularly in relation to technology or interpretations of it. This is evident in the popularity of sculptural works and installations in the exhibition, many of which incorporate audio or video narrations: as if sculpture is no longer enough on its own, or simply in celebration of augmenting static form with aural and visual media. One might read the popular interest in tactility and colour as the influence of Glasgow’s industrial past, or even as indicative of trends for post-modern hues on one hand, and trends for investigations into materiality and labour on the other.

A host of other shows expressed similar enthusiastic engagement with wonderfully disgusting and surprising tactile sensibilities, such as the sculptures and performances of Glasgow Why, the official festival fringe festival. “I feel like fibre-arts are making a comeback,” said Canadian artist Madeleine Hope-Fraser, as we watched body-painted men stand in a hanging five-metre screen print, next to a room where fluffy cow intestine sculptures lay at the foot of colourful painted paper mountains. 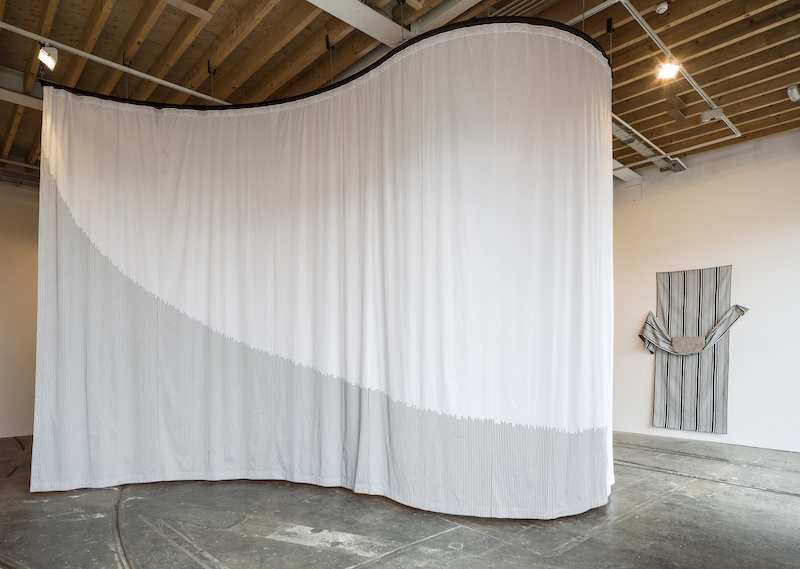 Nnena Kalu’s ‘cocoons’ at the Project Ability Gallery (Trongate 103) shares these material tastes and a concern with the performance of labour, using colourful packing tapes in the composition of her sculptures — attempts to make even disregarded everyday materials (or, read: bodies) assert presence in the white gallery space.

Elsewhere in Trongate, the official Glasgow International hub, you can find a show on domestic materiality and other studies of labour. ‘House Party,’ integrates audio from Esther Ferrer, the 81-year-old Spanish performance artist, and pieces made in response to the audio objects by other invited artists, including grotesque stuffed jars and textiles. (Ferrer also had two performances during the opening weekend of the festival). The ongoing web-based project ‘In Kind’, a research project by Janie Nicoll and Ailie Rutherford, charts the hidden economies and unseen labour of Glasgow International and contemporary arts labour.

Across town, Hardeep Pandhal’s exhibition ‘Self-Loathing Flashmob’ uses now-familiarly bright cutout pieces, cartoonish graffitied figurines, adjacent to documentation of student protests in 2010 at Leeds University. Screens installed on a simple raw-plywood wall, under the crown moulding of Kelvin Hall, play video of different interviews with Leeds students, which, combined with the garish characters, results in an overall air of fun and protest.

Opposite the architectural splendour of even a crumbling Kelvin Hall, several shows in the downtown Savoy Centre bring welcome surprises. ‘Skip-Ad; Play,’ featuring the work of many current and recent Glasgow School of Art MFA students and friends, covers the room in a charmingly disorienting green screen-print, while a few floors below more textiles can be found and purchased in the the wearable art PEEL-EZ showroom. Also at the Savoy Centre, ‘Ascending Delight,’ a show with recent MFA grads, considers art as a “vehicle for alchemy and magic,” presenting some small and surprisingly lovely pieces responding to an “increasingly linked but dissociative culture.”

At Tramway, several solo works integrate the tactile and sculptural, with speculative and fantastical realities overlaid as audio or video components. Turner-prize winning artist Mark Leckey’s installation “Nobodaddy” situates a large replica of an 18th Century wooden figurine of Job, mutilated and malformed, with apertures hiding speakers booming poetic existential musings. Even if the effect is a somewhat droning attempt at omniscience, the piece’s command of the massive and otherwise empty former tram-shed, aided by a compelling CGI video of the sculpture itself, is consuming.

Corin Sworn: ‘There is Movement’, 2018, still // Courtesy of the artist and Koppe Astner Glasgow

Kapwani Kiwanga’s show ‘Soft Measures,’ also uses narrative overlaid as audio, towards “speculative fictions that stretch through a perspective of deep geological time.” Kiwanga’s is a less monumental installation than others at Tramway, but perhaps welcome for this difference. Instead, it’s a more intimate meditation on the slow creep of continents through beautiful sculptural objects, textiles, and kinetic curtains.

Two of the best shows of Glasgow International are installations by more established artists. Swiss-born Urs Fischer placed two tiny mechanical snail sculptures at the Modern Institute, slime absent but forthcoming, making for a minimalist show that is a pleasure largely for the closer look it demands and the pause it creates, respite from the frenzied content of the festival.

At Koppe Astner, Glasgow-based artist Corin Sworn’s exhibition ‘Work House’ is a series of precise gestures that leave you suspended in attention. ‘Work House’ uses altered “personal management technologies” like whited-out calendars, coriander-fennel antibacterial gel, therapeutic tape on dancers previously recorded inside the space, and live feed surveillance cameras to play on themes of bodily maintenance, movement, and decay. The gallery space itself is filled with diffused, directionless light from covered windows, adding to the subtle air of pleasant confusion—experiential glitch—that the large circular hole cut between gallery spaces and other actions in the show trigger.

There is an undeniable energy to be found in many of the shows, even if they vary in success. From the cheerful mess energy of young collaborative experiments, courting risk and play, to the more staid exhibitions by established artists, there is no shortage of exciting work to see.