Ayesha­ Tan Jones is an artist whose practice flows between object, community, spirituality and performance. Their work with Shadow Sistxrs Fight Club allows communities to practice methods of physical and metaphysical self-defence in a time of political unrest, providing a space that prioritises the attendance of queer people of colour—one of western culture’s most marginalised intersections of identity. Their recent video piece ‘Indigo Zoom’ depicts a dystopian future where climate change has left the air too toxic to breathe, with only society’s most privileged able to afford to stay alive. Across mediums and materials, Tan Jones’ work promotes healing and community within a western capitalist society that values individualism above all else. BAL spoke to the artist about the radical nature of their practice and the possibility of finding hope within dystopia.

Romily Alice Walden: Your work is incredibly transdisciplinary, moving through music, programming, sculpture and community. Have you always felt like this kind of borderless artistic output was viable, or was there a moment in which you realised that you could have such a holistic practice?

Ayesha­ Tan Jones: After I graduated in 2016 I had a bit of an art crisis and thought, “What am I doing? Am I a musician, am I an artist, am I a witch?” I was having this crisis and drawing and diagramming lot throughout. There was a moment when I was doing a spider diagram: I had Ayesha in the middle and I had music, art, sculpture, and more, coming out from there, just trying to visualise my practice. Then I looked at it and I put a circle around all of it and thought, “That is my craft!” All of that is a craft. Whatever channels out of my body it takes, whether it is a song or a sculpture or an outfit or alter ego or a film—that is my craft. 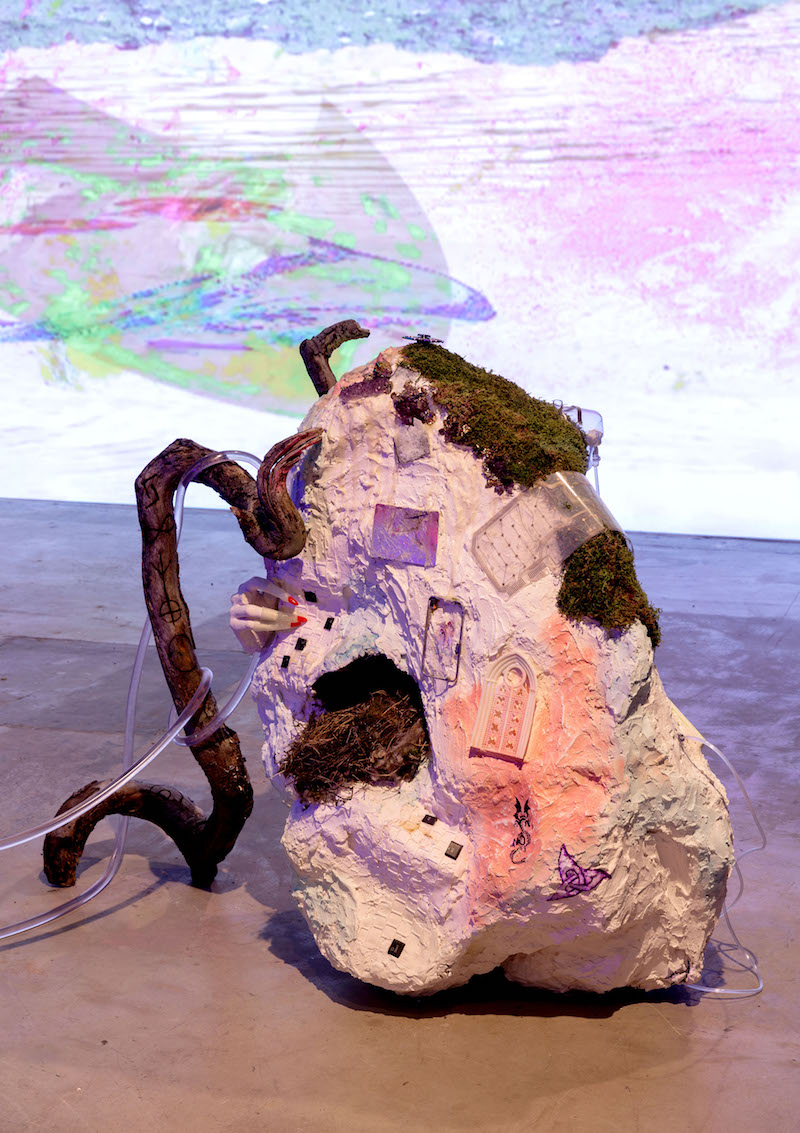 RAW: How does the idea of community influence your practice?

ATJ: I didn’t notice the theme of community in my work until Shadow Sistxrs Fight Club, but prior to that, people were always connecting my work to it in their feedback. I never wanted people to see the work and think, “Oh this is this person’s experience and not mine.” I’ve always wanted the work to be unifying. So I guess community has never been my main aim, but it has always been something that has naturally happened as I share my work.

Also, thinking about my childhood, my mother was a counselor and she started the first ever Chinese Association in my hometown. So from a young age I have seen what it means to start a community and look after a community and heal together. She started the association especially for Chinese immigrants coming to England who hadn’t found their place here yet. I also think that as an only child I was always looking for connection and siblinghood that I didn’t have. So in those ways, community has always been part of my existence.

RAW: Do you think there is something particular about being part of a queer community that can provide a sense of belonging?

ATJ: Definitely. Having a great community is a lifeline for any queer person. The first community I experienced when I moved to London was the queer community and that was so vital in my coming out. Not just coming out, but coming into myself and figuring out what these new relationships are that aren’t just romantic; they are relationships or friendships but they are also deeper than that. They are platonic love, real platonic love. I have been in a few different types of queer communities and some have been more nourishing than others. It’s taken me seven years to really find my family in London. I’ve found that family partly through Shadow Sistxrs and partly through finding more queer people of colour. Shadow Sistxrs is for everybody, but we do prioritise queer people of colour when we are overbooked. Shadow Sistxrs is about sharing experience and sharing moments where we can see similarities between each other and see beyond boundaries or classifications. 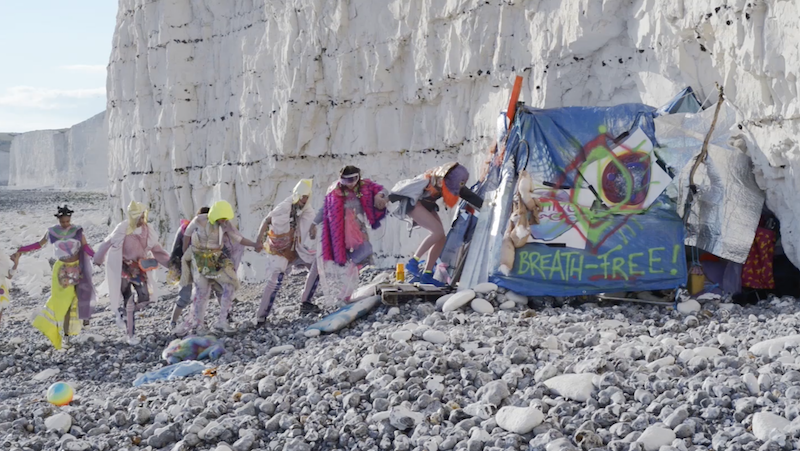 RAW: I wanted to ask about the end of the video ‘Indigo Zoom’, which seems very optimistic. Do you share that sense of hope about the state of the world despite the current political and global climate?

ATJ: I have been talking a lot recently about this thing called optimistic dystopia, which can really be seen in a piece of work called ‘a formula 4 a queer, genderless, whytchfilled, post-consumer, optimistic, anti-capitalist, feminist dystopia.’ The thing that I am hopeful about actually is the death of the Anthropocene. I really want the earth to thrive and I really don’t think humans are the best thing for the earth. I recently did an exhibition at Res in Deptford [in London] called ‘Pyschic Excavations: The Parasites of Pangu.’ The parasites of Pangu is a Chinese myth. The legend is that Pangu was holding heaven and earth apart, and then when they got tired their body turned into the earth and their flesh became the ground and their hair became the stars and their breath became the wind, their blood became the rivers, their bones became the stones, and on and on… But the parasites on Pangu’s body became the humans. I love that we are parasites on this earth.

So yes, I am hopeful about the future and that is what Shadow Sistxrs is about; it is about being nourishing to a community, being optimistic and sharing techniques and skills to self-protect and for people to feel confident about themselves even though we are living in an inherently dystopian society. I think that if we can equip ourselves with the tools for healing within the framework of dystopia, then maybe we have a chance to rebuild this framework, but we can’t do it if we’re not equipped to survive. 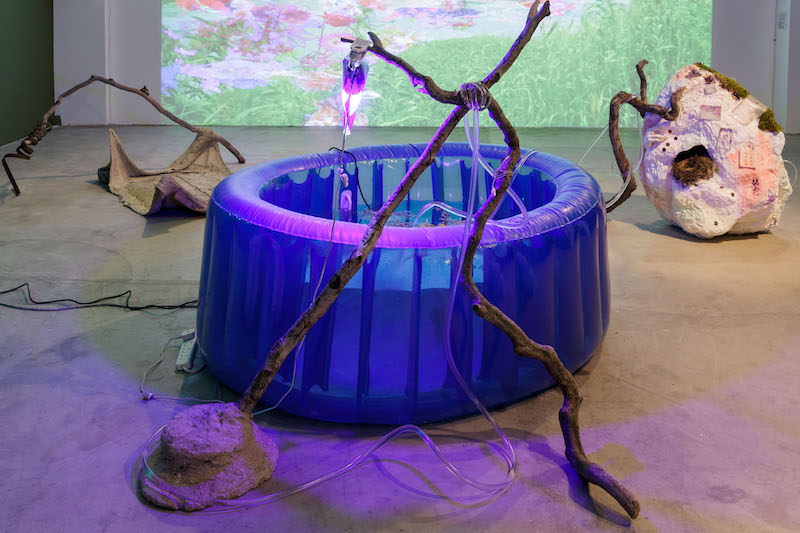 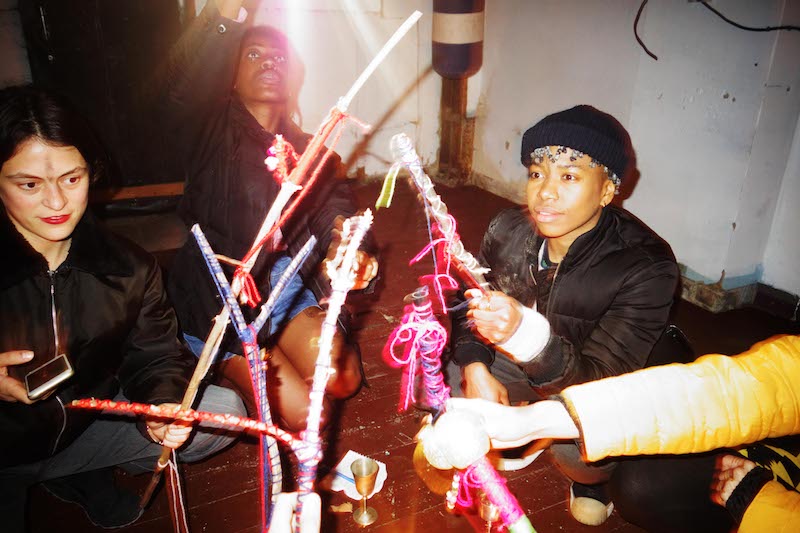 Shadow Sistxrs Fight Club in 2017 // Photo courtesy of the artist

RAW: In your artist’s statement you talk about community ritual and collective healing, I’m interested in like hearing you talk a bit more about that.

ATJ: When I talk about collective healing I am relating it to Shadow Sistxrs Fight Club. We do jujitsu and herbalism and meditate. My friend who runs the Brazilian jujitsu side of the group has been doing martial arts all her life, however, she still doesn’t see herself as a master. I also haven’t done a degree in herbalism and I wouldn’t call myself a herbalist. I am not a doctor, however, I have an interest in herbs so I use Shadow Sistxrs as a space to share that and also learn from others. We all come to the space with the intention to heal each other. We have a mantra that we repeat three times. The first time it’s for ourselves, the second time is for the people who are in the circle with us, and the third time we visualise sending it to everyone elsewhere. The mantra is, “We are the shadow sisters and we are the protectors of our own souls.”