Through visceral artworks on environmental scales, Claudia Comte explores patterns of nature: linguistic, ecological, musical and optical. The artist, born in a Swiss chalet surrounded by the massive timbers that would eventually appear in her work, now lives and works in Berlin and Grancy, Switzerland. Equipped with both paintbrushes and chainsaws, Comte works in a variety of media to explore (and portend) nature as artifact. New animation technologies drive her iterative process of translating natural patterns into models. Her scale shifts and dizzying optics also serve as prime environments for viewers to rethink their movement through space and indulge in their front-facing cameras. While finishing her most complex wall painting to-date at the Contemporary Art Museum St. Louis, Comte spoke with Berlin Art Link about her latest commission in the U.S. and her concurrent exhibition at König Galerie in Berlin. 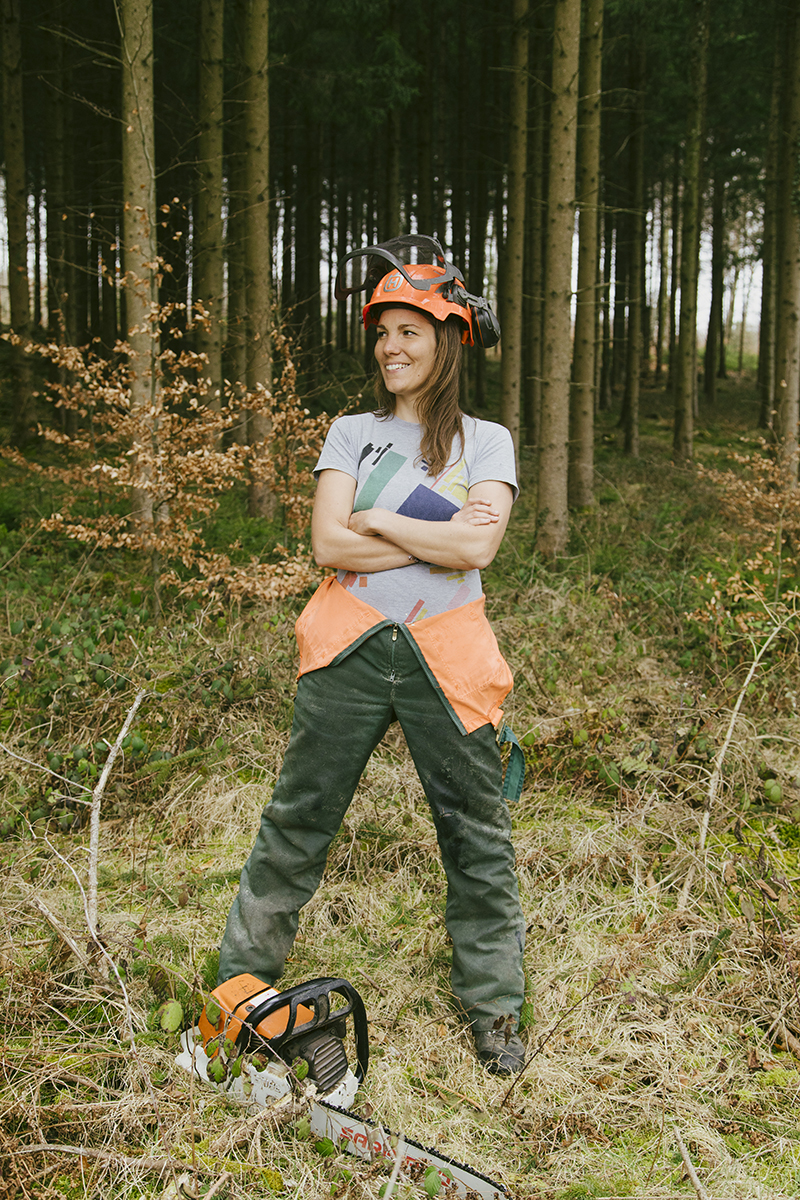 Courtesy of the artist and König Galerie, Berlin, photo by Diana Pfammatter

Jack Radley: How did you approach your commission for the Contemporary Art Museum St. Louis’ Project Wall?

Claudia Comte: From the beginning, it was clear to me that I would produce a wall painting without introducing sculpture or other elements. This led to working on a more complex pattern. With ‘Curves and Zigzags’ in Palm Springs, one challenge was to build the wall; in this way, the work existed as a sculpture before it became a wall painting. However, at CAM, it’s only a wall painting, and at the time of conceiving the work, I was very interested in the rhythmic potential created by a zigzag pattern and had been waiting for the right opportunity to push this aspect even further. 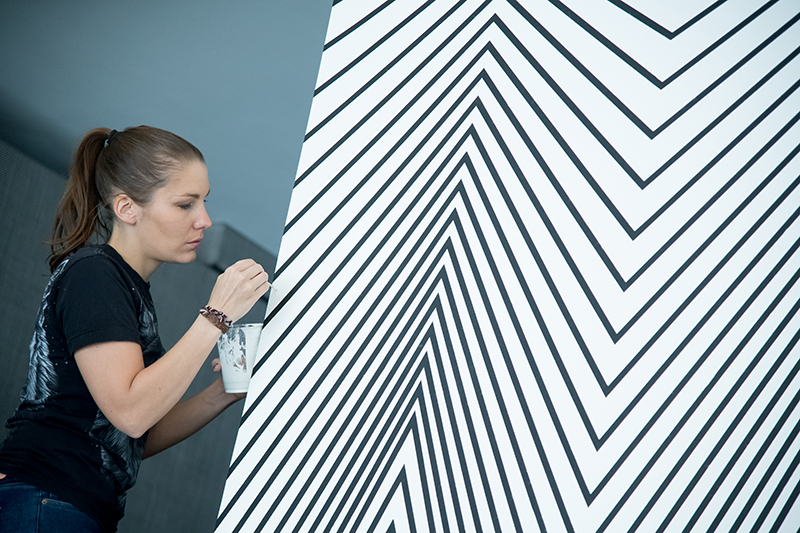 JR: Your works have a distinct rhythm to them. Does music influence your work?

CC: I listen to a mix of electronic and classical music. I played the flute for thirteen years, starting when I was seven. There are so many benefits to playing an instrument at a young age; it helps to develop rhythms and systems in your brain. Sometimes I hear melodies when I produce a sculpture or when I make a painting. I also read my wall paintings this way, by following the zigzags’ tonalities and rhythms. Berlin is, of course, a great place for electronic music. After the recent opening at König Galerie I went to Berghain, which I found so relaxing, actually. I danced for hours and hours.

Claudia Comte: ‘When Dinosaurs Ruled the Earth’ (installation view), 2018 // Courtesy of the artist and König Galerie, photo by Roman März

JR: How did you come up with the title for your show at König Galerie, ‘When Dinosaurs Ruled the Earth’?

CC: I like this title because it speaks about different periods. It also evokes the apocalyptic sci-fi movies from the last decades of the 20th century, like Jurassic Park, for example. A big flag appears at some point in the movie that reads “When Dinosaurs Ruled the Earth.” Originally, the title was given to a film produced in the 1970s and its storyline is an exciting anachronism depicting humans fighting dinosaurs, who of course did not live together. I like to create a narrative in my shows and for this installation; it felt right to give it a cinematic-sounding title.

JR: How do you think through time in the work?

CC: ‘When Dinosaurs Ruled the Earth’ is very much about material and time. The tree trunks are about 100 years old, but the marble I’m using was formed millions of years ago, at the time of the dinosaurs. I like this relationship that puts us somewhere on the timeline of Earth—we understand that so much happened already before we were here.

JR: Do you see environmental implications in the work?

CC: Like a lot of people, I’m very sensitive to ecological matters. We need to find solutions. We are destroying the biodiversity which allows us to live. What I’d like to do with this show and other projects is to highlight the natural world around us. We are not in an ‘Avatar’ movie where everyone thinks the natural world is so beautiful—the nature we’re in here, now, is just insane. When you start to dig a little bit or look carefully at animals and all these different species you find this connection between all of them and us.

I’m really interested in the shapes of nature. I 3D-scanned an auger shell that I rendered in bronze and marble. They express a perfect pattern we can find through mathematics that we can already find in nature. At the same time, you could imagine those big trunks were the dinosaurs.

JR: How do new technologies factor into your practice?

CC: In the show at König I produced a series of animations using 3D scans of my sculptures. In this work, I am trying to recreate nature or natural behaviors with substances that together would be impossible to articulate in real life. If I take a small cactus out of wood that I’ve shaped with the chainsaw and I throw it on the ground and want it to morph into liquid, this can’t happen. But I can do this now in an animation. I think it’s cool that we are trying to recreate natural behaviors through computer generated programs. For this, I worked with the Computer Science Department of the University of Freiburg in Germany. These guys are developing software for robotics and medicine, but of course, this type of programming is also used for big blockbusters. Another program I have worked with, Phoenix, is actually used in different simulations for ‘Game of Thrones’ animations. I find it fascinating that the line between amusement and research for scientific purposes is so thin. 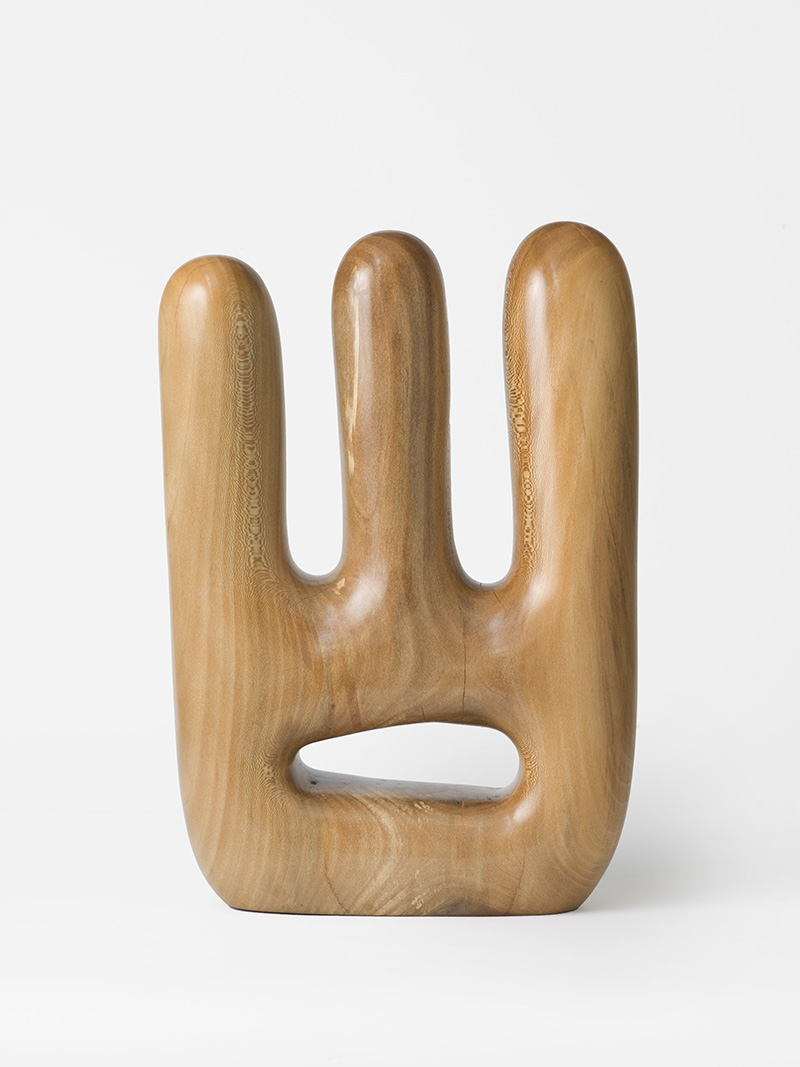 JR: What is the relationship between your site-specific works and the market?

CC: The most important thing is that I’m working for my work—not for a person or the market. The work is central. At König, the collectors buy the trunk with the object in it. For the installation I needed the six-meter-high trunks to adhere to the same system of past trunk installations. Then I thought it had to be flexible to go into someone’s home, because most people don’t have cathedral ceilings in their homes. And I’m also hoping that more modest people can also acquire the work. I proposed to cut the trunks smaller at the end of the show. If the person doesn’t say anything, I will cut it at two meters, but you can also have it at three, four or five meters. Ideally I will get a photo of the space so I can make it fit the best. That’s a lot of work on the top of what was already quite a physically demanding show, but what matters most is the work and that it’s presented and lives well. All these pieces are creating one family together, but of course, they can live anywhere else as well as alone.