‘Forever Endless,’ the first collaborative performance by artists Jayson Patterson and Caner Teker which debuted earlier this month at Mitte project space M.I/mi1glissé, deals with the negotiation and “snakes and ladders” of queer relationships. Here the Australian-born, Berlin-based Patterson and German-Turkish-born, Düsseldorf-based Teker confront the ecstatic highs and euphoric lows inherent to the city’s queer club culture and party scene, as well as the sadness and anxiety that so often dwells underneath the surface of these spaces (they even first met at Cocktail d’Amore, a staple within Berlin’s queer party scene). Further, ‘Forever Endless’ explores children’s games, their sexual implications, and how these first contacts with tactile intimacy and the frustrations that come with them extend into adult life. Here movements are lyrical and gestural. Emphasis is placed on learning, observing, mimicking, instructing and control. 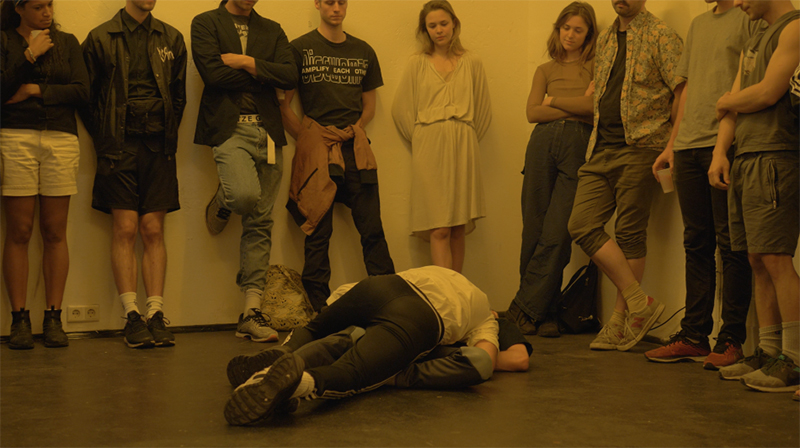 Having neither trained formally as dancers, both Patterson and Teker come to dance and performance via atypical trajectories, and this comes through in their consideration of the audience. “For me, we are a body that performs against the audience, regardless of the audience,” Teker says. “We share the space but we’re not serving the public. It’s not about entertainment; it’s more about making up deviant spaces and inviting people to experience it as it is.”

The duo will next perform ‘Forever Endless’ on July 1 in Düsseldorf at Nilsson, during ‘Beni Başlatma,’ a space created by Teker that will provide an ephemeral platform for performance and social choreographies underrepresented in the German city. Other artists performing include Marlene Kollender, Katrin Mayer, Anna-Lena Meisenberg, Katharina Busch, Tobias Hohn and Stanton Taylor. We spoke with Patterson and Teker about their individual practices and what it’s like working together.

Samuel Staples: How did this collaboration come into fruition and why?

Jayson Patterson: When Joel [Mu, M.I/mi1glissé curator] asked me if I wanted to do something I knew instantly that I wanted to work with Caner. I thought it would be more interesting to see where our practices come together and where they diverge rather than a solo performance. We both come to dance from these sort of non-standard trajectories, or what I like to call bric-a-brac or thrift-store trainings. Caner comes from this fine art background and I come from more of an experimental choreography background, but neither of us are trained. Caner’s very classical and he likes the aggression and I’m constantly trying to sort of diffuse this with “children’s games” or “kindergarten activities.” 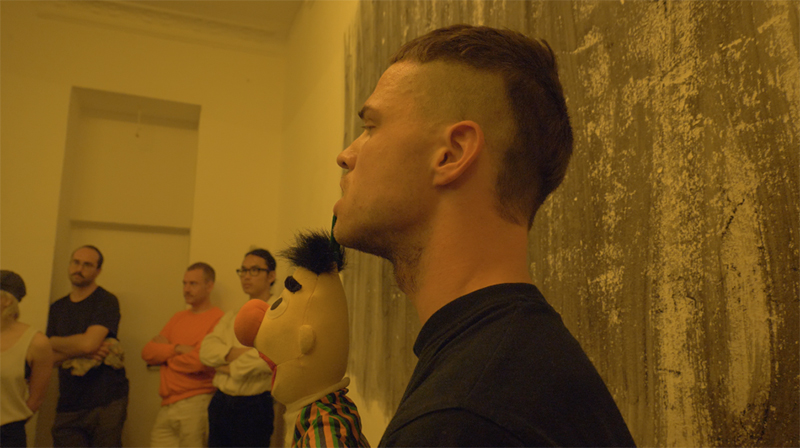 JP: For me the party scene is really all about kindergarten. I used to work at a kindergarten in London and kids would be so happy in one moment and 10 minutes later they’re crying. It’s kind of like the charges of parties, like going and playing and being silly and chitchatting with people and in the next moment you’re crying. It’s like a game of snakes and ladders: you’re in the cubicle, you’re up a snake, you get rejected in a microaggression and you’re back down the ladder. It’s a game.

CT: The mix of Jayson’s children’s games and my seriousness becomes something grotesque in the performance, but it also opens up a space for humor.

SS: How does the topic of control figure into your practices as performers and into the performance ‘Forever Endless’?

CT: I’m totally a perfectionist and neurotic about control. I need a structure, I need choreography and I need to always do the steps the same. So I need to have a rhythm, and that’s why the improvisations [in ‘Forever Endless’] bring me out of my structure. In this collaboration we really opened up the choreography and improvised, and in doing this you lose control. This was something new to me. I’m very precise, having control gives me a sense of security—you know how to do it, you know how to look. I think Jayson’s a bit more sloppy. [laughs]

JP: Totally. I don’t mind that I stop the music and you see me physically manipulate our surroundings in the performance. I don’t mind this kind of D.I.Y. approach or these invitations to surrender control. I feel more restricted by tying things down a lot. In my working methods I give myself a more task-based approach.

Something that really occurs to me about Berlin and its club culture is the need for precise self-measurement, self-regulation and self-surveillance in this time when we surveil ourselves so much and we also so precisely attempt to curate our images. There’s a constant renegotiation with yourself. But there’s also some beauty in this. In Berlin I see all types of people—people fucked up on the U-Bahn, people sleeping on the street, people on drugs in the supermarket. You see all types of bodies and you’re allowed to lose control. In this work, there’s space for this.

CT: This performance is of course about losing control but also about trusting each other, trusting that we can give control to someone. I give this [control] to Jayson and he gives it back to me. 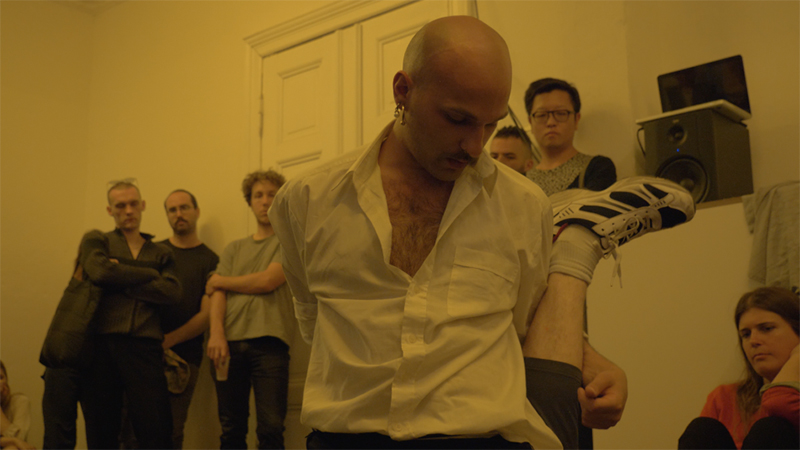 SS: Sound plays a large part in ‘Forever Endless.’ What’s the significance of the music looped throughout the performance?

JP: I take responsibility for the music, which again is this thrift store approach I take to finding samples and sounds buried in the internet. I like loops, so there’s this element of repetition, much like in movement of the performance. One of the samples comes from a Frank Ocean song, another is this intense mechanical washing machine sound.

CT: The sequence with the washing machine sounds is related to social choreography in club situations, from sleeping to standing, sitting and collapsing. The gestures we perform in this section in unison are a mix of intimate moments in club settings that occur between washing your hands or fanning your t-shirt.

JP: There’s also the audio of the woman speaking and sounding out words, which is ripped from a kindergarten Youtube video on phonics. This plays before Caner writes words on the gallery’s wall in chalk. It’s also a bit self-reflexive on dance being so abstracted from meanings and messages and the semiotics of dance.

SS: In one of the final sequences of the performance you write words like joining, deviant, unconscious, and retirement. What significance do these words have to you?

JP: We wanted to respond to the phonics and to open up this space of language that is specific and queer but not obvious or literal. Words like “retirement” – when do you say no or when is it time to go? This is a very difficult question that comes back to self-control. When do you know when you have what you need?

CT: It also references the pressure of performing, when do you stop? 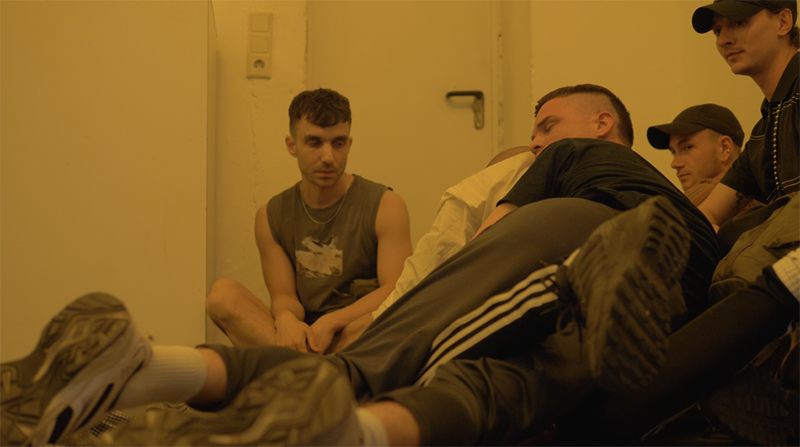 SS: ‘Forever Endless’ was centered around both of your gay/queer identities but not so much about your origins. From what place do you approach dance, and from which experiences do you draw in your practices?

CT: When I think of dance, it is always connected with weddings and Turkish folk and traditional dances, as those are intense experiences I grew up with. Later, western choreographies and club culture interested me, however, my cultural heritage was always in my head. One comes with the other, and it is something that I can’t run away from.

I became interested in dance from a spatial interest, moving away from text-based to more movement-based scores. I have a background in writing and publishing and it became a question of presentations, of how to present writing. One way was to self-publish and the other was to perform it. It developed from staged performance to more open choreographic scores.

JP: Dancing was always an activity for my sister and I to just do—making up dances on the trampoline during school holidays and thriving off Spice Girls cassettes. There were some questionable high school musicals, which feed you this crazy level of showbiz performativity and many years later it stays deep within your body even if you try to resist it. Also, coming from a working class background, my family couldn’t really afford to take part in technical dance training or “classes,” but then my mum got a credit card and we got into a lot of debt because she kept putting my sister and I into these expensive classes. So my entry into “performance” was also related to predatory economic systems and my work in performance is consequential of these things.

I think dance is most useful when considered in broad expanded terms that include the moving body in any manner or form, like they did in the 60s. More recently, it also means being aware that the body physically holds and carries our emotional trauma. I think ‘Forever Endless’ certainly transmits a hard-to-articulate collective contemporary anxiety, maybe queer anxiety. I identify more closely to dance that isn’t just about young healthy bodies and that includes a variation within psychological health.