Spread throughout eight venues and featuring more than 90 artists, the first edition of the Riga International Biennial of Contemporary Art (RIBOCA1) is a curatorial feat. Many newly commissioned works are interspersed with numerous pre-existing videos, sculptures, installations, immersive environments, scheduled performances and a few (lonely) paintings, all of which are culled together under the title of ‘Everything Was Forever, Until It Was No More.’ From a bird’s eye perspective, RIBOCA1, curated by a team with Katerina Gregos at the helm, addresses issues of change—be it technological, environmental, political or otherwise—and upon closer inspection, it becomes clear that each location has a narrower thematic focus. Works inside the Former Faculty of Biology of the University of Latvia, for example, inspect the natural world and the human relationship thereto. The former residence of Kristaps Morbergs, a notable Latvian patron of the arts in the early 20th century, hosts works that explore the collective memory of political histories, and Sporta2 (a disused candy factory now home to startups and co-working spaces) presents an impressive analysis of unseen technology, such as data storage centers and undersea cables. Continue reading to learn about some of the works that left lasting impressions. 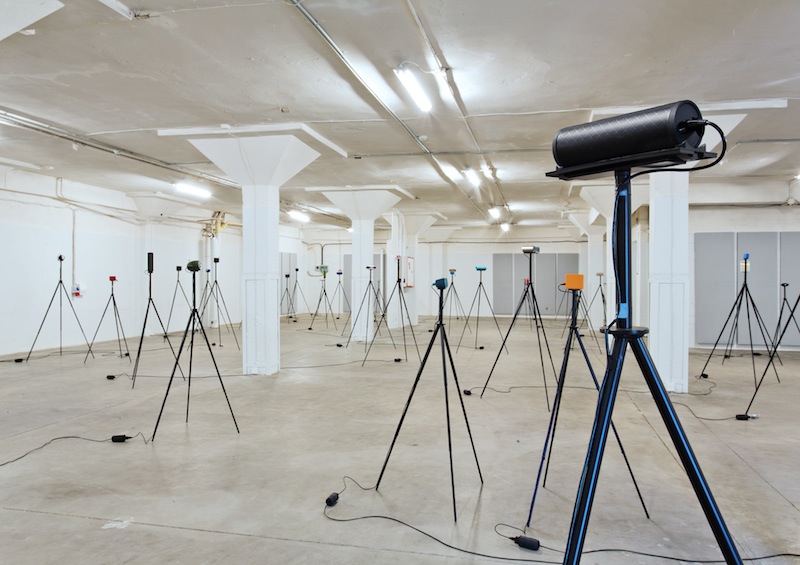 “Sorry for the delay. Resurrecting from digital death is difficult,” a travel-size speaker whispers. This speaker stands amongst more than 30 others, each offering a different iteration of a sentence with the same underlying message. “I am sorry for my late reply, there were personal problems.” Haven’t I written that email before? “Sorry for the delay, I’ve been so busy.” Haven’t I written that one too? Is this an excuse, the truth or an automatic script followed when replying to an email two entire days after it was received? Compiling both real and computer-generated responses, Makhacheva addresses our digital relationships: what is this unwritten code we all too willingly follow? And how might we change our responses if they were in-person or even over the phone? Standing at the entrance to the room hosting the installation, a sea of voices creates a sense of amnesia, individuality lost within a cacophony of sounds. Placing one’s ear nearer to each speaker, however, evokes an audible déjà vu.

Aromas associated with the beach are often enjoyable: a breeze infused with salt water, the earth’s soft mustiness, lingering traces of sandalwood. In this sensorial artwork, however, visitors experience the more unpleasant smells lurking beneath the surface. In the Former Faculty of Biology, a disused chemistry lab holds nine large beakers, each emitting a different scented fog impossible to ignore. Visitors approach each one individually, some placing their noses directly next to the beaker’s opening, others taking a more cautious approach and using their hands to waft the fog nearer. “These are about smelling, not about looking,” Tolaas, who was standing in the room when we visited, says. To create these fragrances, the artist analyzed, simulated and artificially reproduced data gathered in the Baltic Sea and Gulf of Riga. Each one reminds us that the sea and the beach are not untouched sacred places, but rather grossly polluted natural spaces, often in various states of decay due to ignorant human actions. 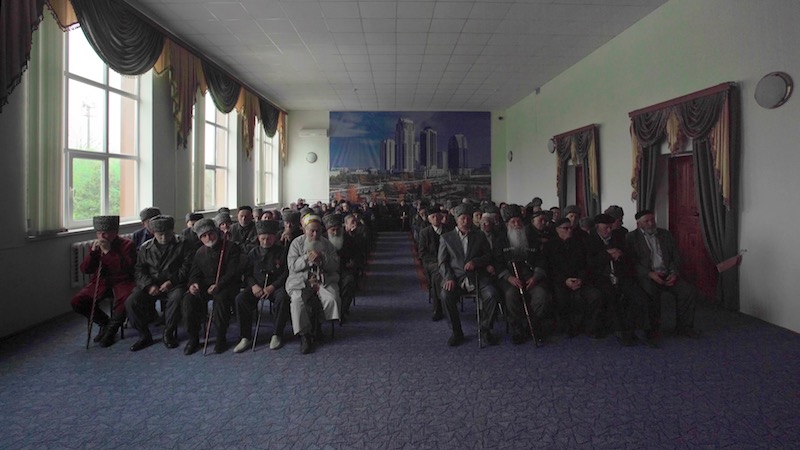 Aslan Gaisumov: ‘People of No Consequence’, 2016

One by one, 119 elderly men and women silently file into a room, the only sound the shuffling of their feet and settlement into rows of chairs. Their silence reflects the history of their common ground: every person present is a survivor of the February 1944 deportations of Chechen and Ingush people by Soviet authorities, which was a national catastrophe yet has never been properly investigated and has effectively been silenced through its exclusion in local histories. The silence creates a poetic atmosphere, albeit one charged with emotion. Each face appears hardened. Some attendees, who were driven to this room from all over Chechnya, have trouble walking. Many carry canes. Like the traumatic event itself, the survivors seem to be forgotten—something that through this film Gaisumov perhaps wishes to change. 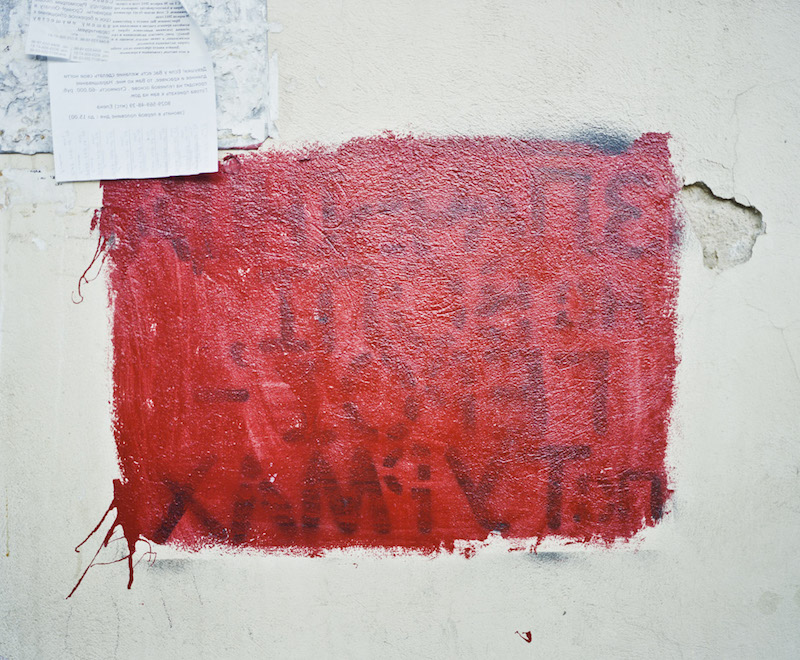 Sputnik Photos: from the ‘Lost Territories Archive’ series, 2016 // Photo courtesy of the artists and RIBOCA1

In a site-specific installation at the residence of Kristaps Morbergs, Sputnik Photos, a collective of Eastern and Central European artists, pasted more than seven large-scale photographs, taken in former Soviet countries, beneath peeling wallpaper. In one case, they even reproduced a piece of graffiti that was once on a wall in Minsk, Belarus. In another, the show an unfinished viewing tower in Anakila, Georgia, where President Mikhail Saakashvili visited in 2011 and announced grand plans to transform the village on the Black Sea into a luxury resort. Construction began the following year, but in 2013, following his party’s parliamentary defeat (and his own fleeing of the country), the project came to a halt and the site became one of crumbling ruins. An image of the tower covers a wall from floor to ceiling, partially obscured by off-white wallpaper. By presenting it in this “historical” way, the viewer is unaware of the image’s incredibly recent history. Facts transcend into fiction, and we question the truth and aims of political trajectories. 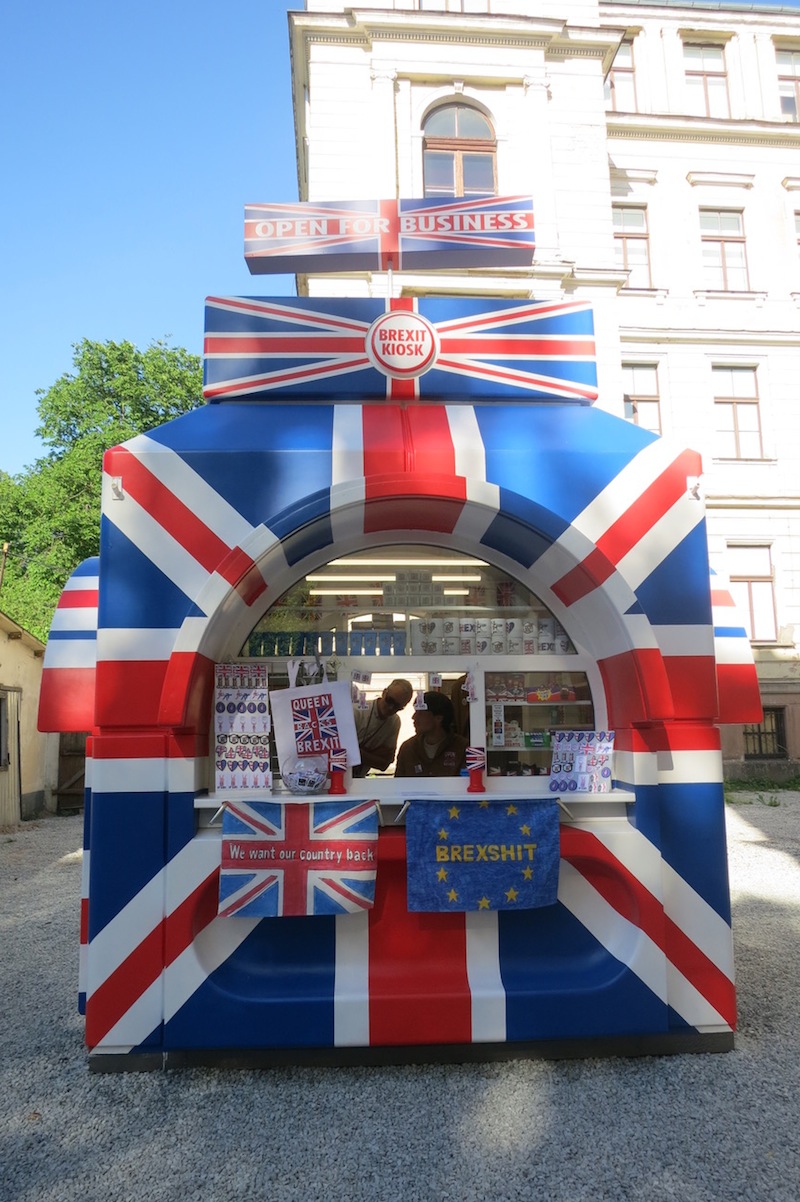 A humorous critique of our post-Brexit era in a post-Soviet city, this fully functioning kiosk sells only British delights (PG tips tea, Marmite, HP sauce) and Union Jack flag ephemera (mugs, magnets,), offered from within a historical newsstand formerly used to disseminate communist propaganda. Manned by a uniformed ex-soldier, the stand is isolated within the courtyard of the Former Faculty of Biology, presented alone within a highly structured exhibition, all too clearly reflecting Britain’s self-inflicted exile from the European Union.

A stage forms the center of this installation, surrounded by posters for the Tallinn Jazz Festival, covers of records by the likes of American musician Charles Lloyd, reprinted newspaper articles about controversial events and more. Through this piece, Siib investigates what marked the final jazz concert in Soviet Union and presents her findings. From an unaware perspective, it is surprising to learn that jazz, such an incredibly free form of music, was permitted in the USSR for nearly 20 years. Less surprising, however, was its demise: fans unofficially invited the Charles Lloyd Quartet to play at the 1967 Tallinn Jazz Festival and after days of negotiating with Soviet authorities, the group was finally permitted to take the stage on the festival’s final evening. Their performance resulted in an eight-minute ovation—and eventually a live record—but also, fearing an increasing Western influence, led the authorities to abruptly end Estonia’s jazz festival tradition. Siib’s installation shares this history, from both American and Soviet perspectives, leading viewers to question how history is written and collectively remembered. 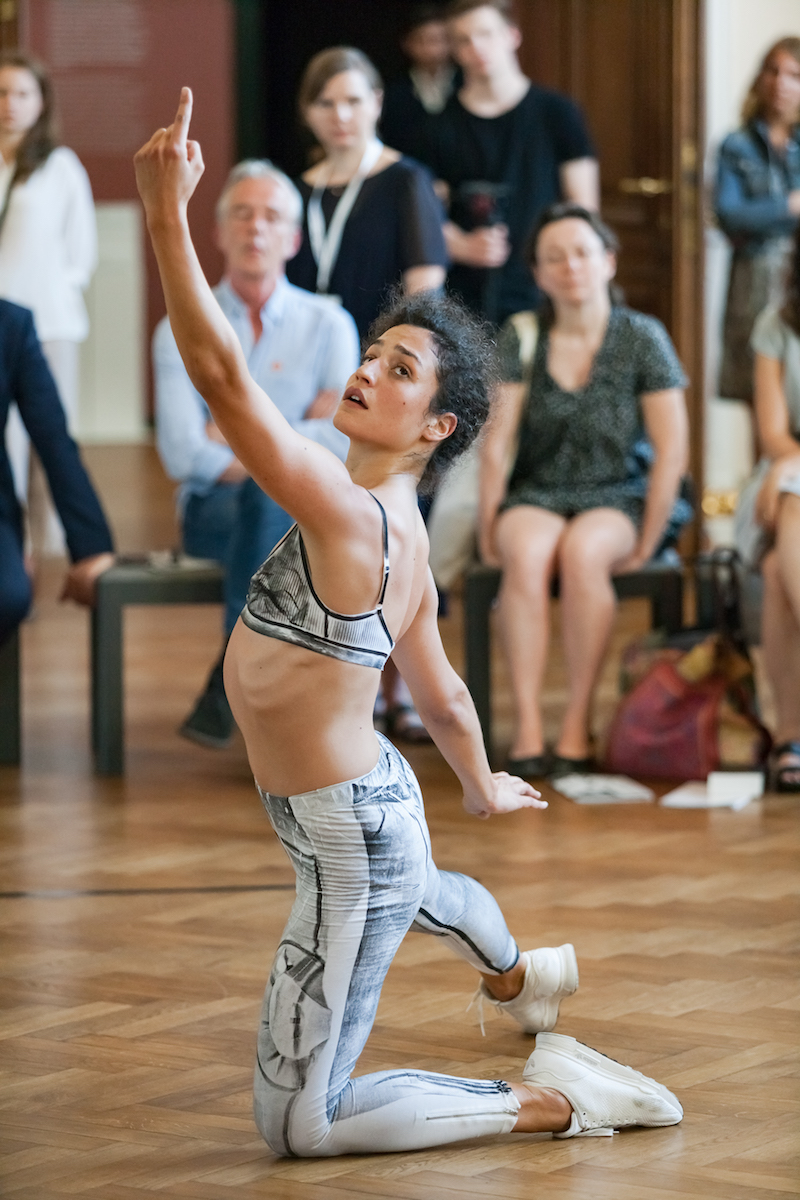 In this choreographed performance, two women appear fully clothed and begin to painstakingly repeat recognizable female poses from Italian art history. As time passes, the dancers remove articles of clothing until they wear only sports bras, leggings and sneakers, concurrently increasing the intervals and intensity of their repetitions. “Salome, Lucretia, Judith, Leda, Mary Magdalene,” they chant, “Diana, Venus, Cleopatra, the allegories of Spring, Victory or Justice.” Although one would like to think society has progressed in terms of gender roles and the objectification of women since the early Renaissance, this performance forces viewers to realize that we have yet come very far.

Stepping into Kirkegaard’s immersive installation, we forget where we are. Red light and thick fog fill the room, the only sound a hypnotic trickle of water that emanates through hidden speakers. Without our noticing, the light shifts to a pale yellow and trickles of water begin sounding like plunges into a mysterious body of water below. We’re lost within the shifting soundscapes, caught in a trance by the gently changing light. These sounds are in fact the artist’s field recordings from an environment that usually goes unnoticed—or even untouched—by humans: Greenland’s ice sheet. Covering more than 1.7 million square kilometers and containing about eight percent of Earth’s fresh water, the ice sheet has hit record rates of melting in recent years and Kirkegaard captured every stage of the melting process. Upon learning the history of the sounds, our trance transitions to hyper-sensitivity, the red light becoming an urgent beacon to change the environmental reality at hand.

RIGA INTERNATIONAL BIENNIAL OF CONTEMPORARY ART
Group Show: ‘Everything Was Forever, Until It Was No More’
Exhibition: June 2 – Oct. 28, 2018
Various locations, Riga and Jurmala, Latvia, click here for map