Layers of painted brick unfurl along the façade of the industrial building that houses Tschabalala Self’s studio in New Haven, Connecticut. Inside, the unmistakable hum of fluorescent lights grows louder as we climb to the fifth floor. When the artist unlocks her studio door, she reveals enormous windows that dress large canvases with natural light, dissolving the stairwell’s drone. Her studio overlooks evergreen treetops rather than canary taxicabs, its tranquility more reminiscent of the Hudson River Valley, where she spent her undergraduate years at Bard, than of her native New York City. 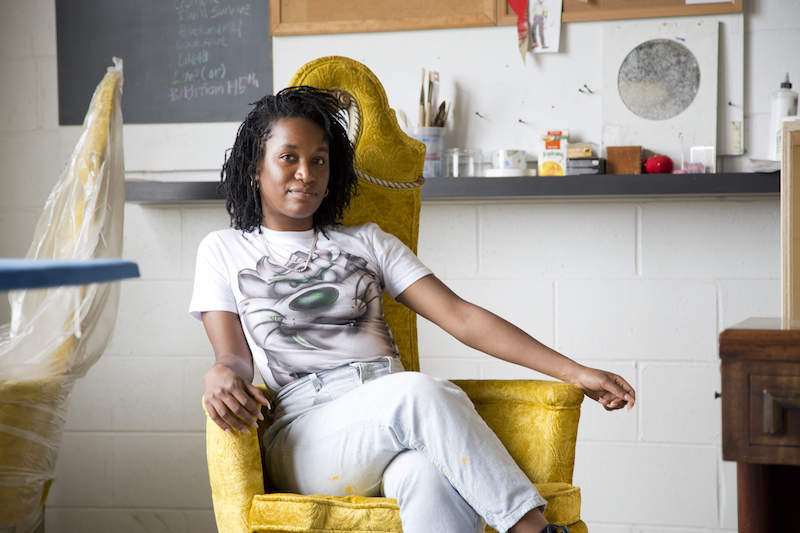 Self’s colossal paintings—often composed with equal patchwork and pigment—posit and probe the iconography of Black bodies. On canvas, her characters inhabit cerebral and urban enclaves to examine interactions “between subjectivity and subjection.” Her sculptural silhouettes of bulbous lower torsos galvanize gallery spaces to confront voyeuristic abjection. Curvy, confident figures create portraiture through not likeness, but earnest animation. At only 28 years old, the Yale MFA graduate has already launched a successful career and made a memorable name for herself by rewriting the subject matter of art history while outshining its all-stars—at a recent Art Basel Miami, Jeffrey Deitch claimed there was more interest in her work than that of Picasso or Picabia. 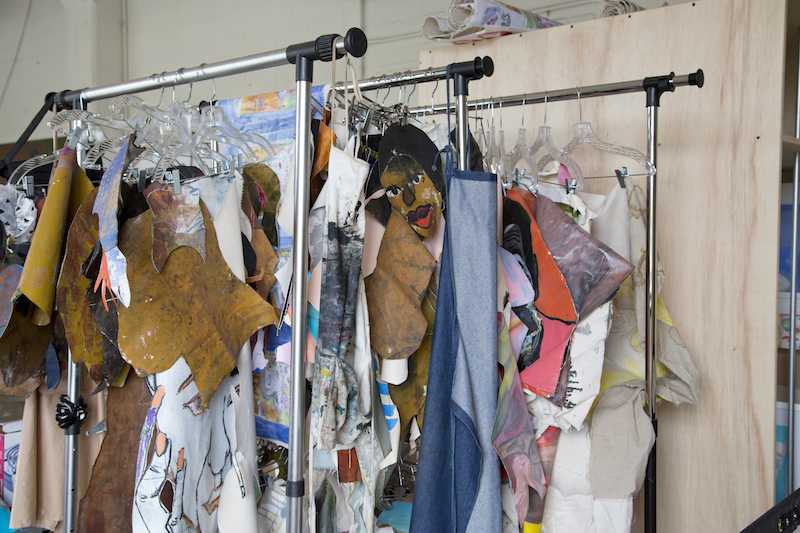 In what most people would disregard as scraps, Self sees swatches and studies. Fragmented fabrics and painted pieces of canvas are strung on clothing hangers; a face peeks out between patterns. Self often returns to this rack to select materials with which to compose new works. The fabrics do not outfit the figures, but rather materialize their flesh, movement and attitudes. Originally a printmaker, Self unpacked the process to realize what she loved most was building out the plates, now evident in her assemblage of textiles.

“Sometimes to build out the face, I’ll work at the sewing machine first,” she explains. “A lot of the faces have the most amount of detail.” Self then moves to the floor, where she experiments with configurations on canvases, covered in footprints that bear the record of her movement. After finalizing the composition, she sews the bodies in place and stretches the canvases before applying paint. “Stitching something onto canvas blends it perfectly,” she says. “Canvas is a fabric, a material, a textile, and people forget that. I treat the canvas as another one of the textiles that I’m using.” 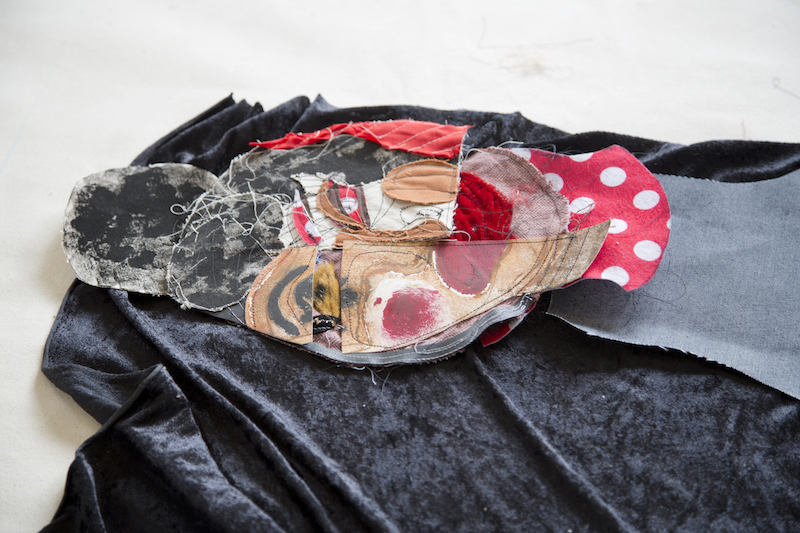 A walk around her studio space divulges a timeline, alluding to her process itself. Materials echo across walls, as the denim of one figure’s resting hand becomes the plump torso of another. “I like when parts of one painting end up in another, because it’s like they’re all related. They share physical traits,” she notes. While she used to refer to her subjects as avatars or stand-ins for herself, she now sees them existing in their own community.

Although they often occupy what Self refers to as “liminal” or “psychological” realms, her figures do not float; they command mass. They dance, they stroll, they stand, they stare. While she assembles their corporality with positive forms of fabric, she also establishes biceps and forearms through negative space, in painted forms that recall Matisse’s cut-outs. The finesse with which she establishes the vivacity of her figures garnered much attention in the New Museum’s recent exhibition ‘Trigger: Gender as a Tool and a Weapon.’ 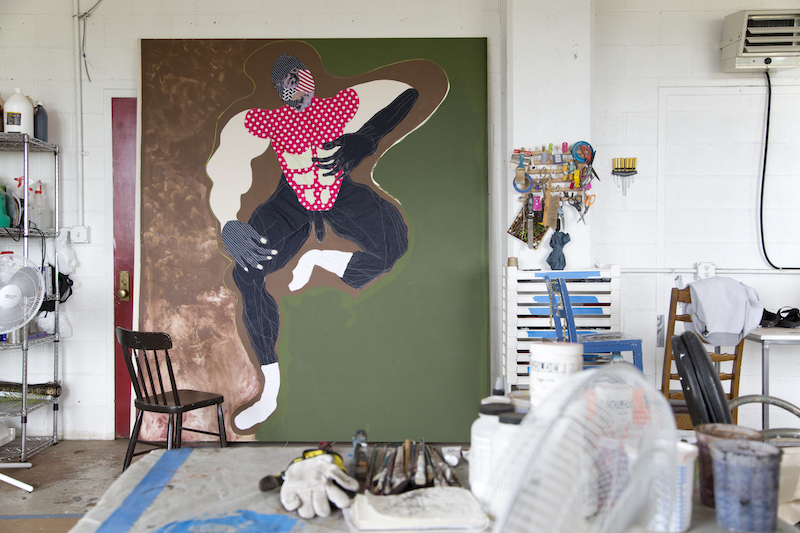 Self reveals the nuances behind gender depictions both in her process and artistic output. “I don’t know if I think about the female figures consciously so much as being female, because I’m making them based on a representation that could be a stand-in for myself,” she says. “But when I’m making the male characters, I think a lot about how their gender might affect their form and function.” She explains that the male figures could represent her ideas or feelings, but she also recognizes that they will not be perceived in this way. She notes that “the work is inspired by and about Black people, and gender expression is something that can sometimes be exaggerated or extra-performative in the Black community.” 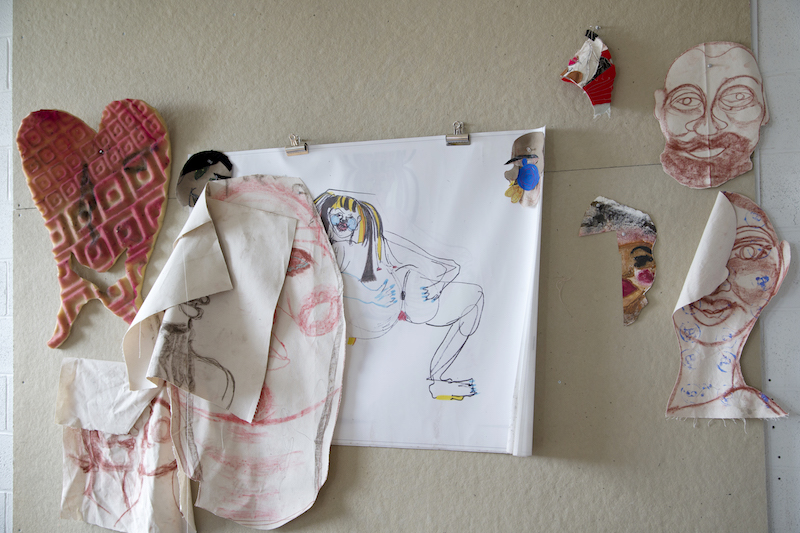 The figures themselves may not always assert an overt femininity; however, their production recalls familial and domestic work from Self’s childhood, including household chores like ironing and folding laundry. While mixing wheat paste for a public art project in Detroit, Self remembered baking with her mother. “You really internalize the things you do, even if you use them for a totally different purpose. Maybe the making of the work is gendered to some degree,” she admits, “but when I look at the paintings, it’s ironic that these large, super labor-intensive works are built by a lot of domestic-oriented labor.” 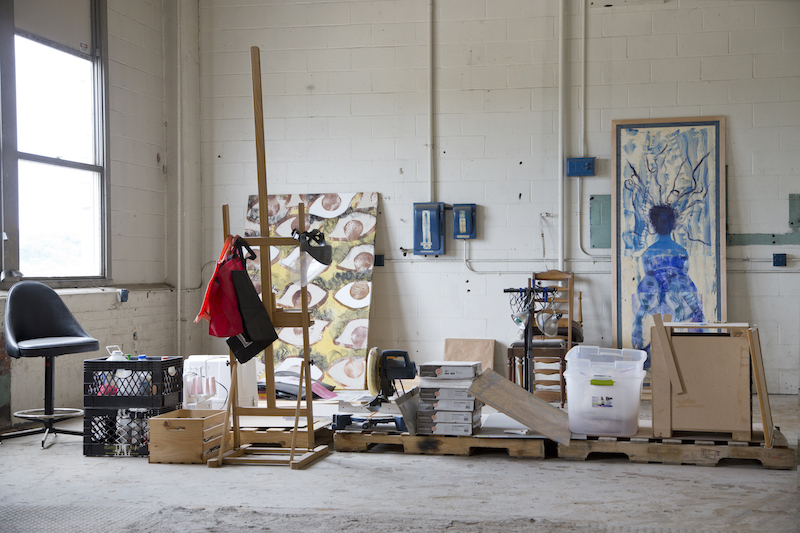 Most recently, Self has been working on her bodega series, in which her subjects inhabit the cornerstone stores, replete with regiments of beer bottles and M&Ms, ubiquitous in her youth. “The bodega seemed like the perfect environment for my figures to be in, because it is quotidian, at least for me; it’s a space that visually is part of the landscape and the communities I grew up in and am in now,” she explains. “That kind of space is very iconic to Black metropolitan life and mirrors so many aspects of the lives of the people who utilize it.” In the bodega, originally established by people of color for people of color, she uncovers its duality as a site of stocked goods and socialization. “I feel like the bodega is a metaphor or a doubling for the figures,” she says. 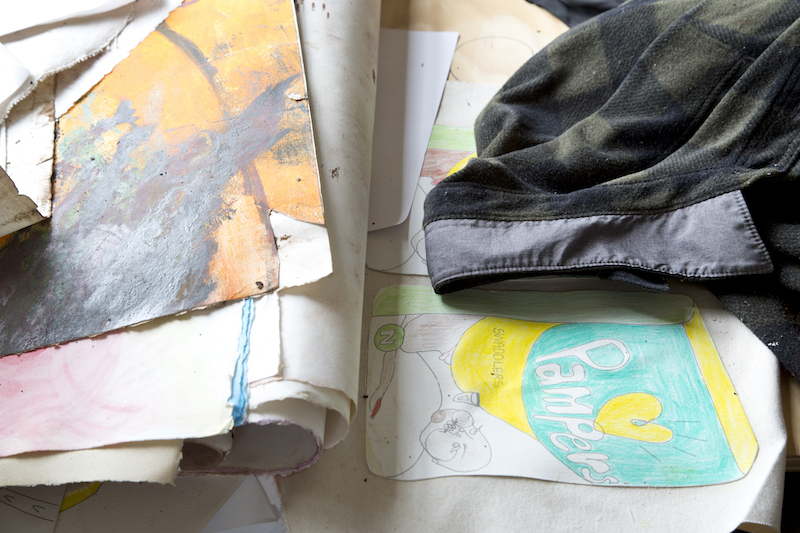 As the series has progressed over the last year, the references to bodegas have become less literal in her pioneering visual language that synthesizes commodity and community. Returning to her printmaking roots, Self uses the actual products found in these spaces, stamping candy bars in brick-red paint and twisting can tops around to reveal urban infrastructure. In this sense, the spirit and community of the bodega transcends its interiors; she visualizes the impression that these neighborhood spaces have on their inhabitants, even after they exit.

Self is invested in documenting her own experiences in what she refers to as “Black aesthetics.” While she does not think this term can be distilled to a singular form, she cites other contributors, such as Nina Chanel Abney or John Edmonds. “I don’t think Blackness has to be the literal color Black or phenotypical. It has all to do with attention,” she notes. “I like to have the skin of the figures to be this woven patchwork—a patchwork of different elements that come together to mean the same thing is the most accurate way to describe my racial and cultural identity. It’s a more accurate description for Black identity as I know it, because I’m Black American.” 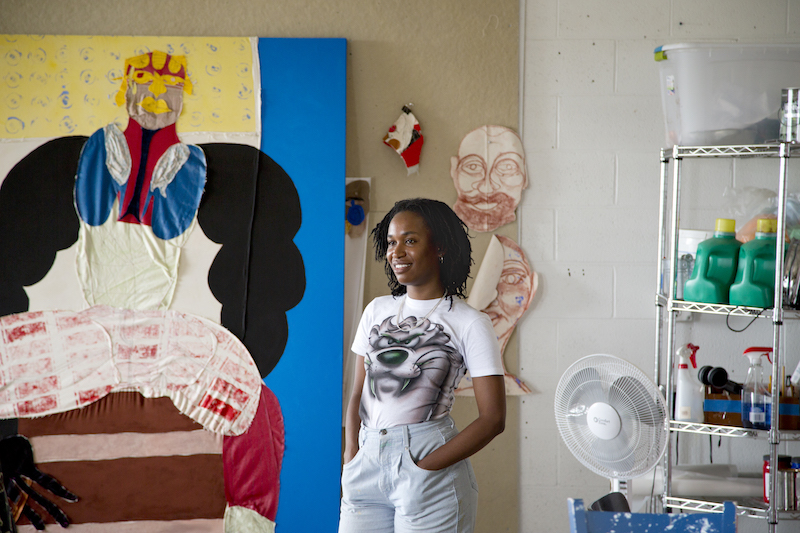 Pinned to her cork board alongside exhibition announcements and photos of friends, a quote from her favorite artist, Kara Walker, stands out: “Rage is fun. / I turn invisible when I turn sideways / I never learn / I am always right.” Self’s rage lies in the layered visibility of the characters she creates in spaces fresh and familiar, averring the vigor and verve of her figures, their communities, and her own artistic triumphs.