Unfolding at the site of the former Australian Embassy to the German Democratic Republic (GDR), the exhibition ‘Ex-Embassy’ examines the conventions of guest and host relations between the two nation states through artistic works and commissioned texts presented in and around the iconic modernist building. The exhibition, conceived by artist Sonja Hornung who worked closely with curatorial advisor Rachel O’Reilly, aims to unpack the cultural and diplomatic work between the GDR and Australia which ended prematurely in 1986, before the fall of the Berlin Wall. Exhibited works and texts address themes of narrative and identity, sovereignty and diplomacy, property and value, and racialization and indigeneity. The structure itself, located in Pankow, Berlin, acts as a container for these ideas and conversations—as much a part of the geopolitical discourse as the works exhibited within and around. 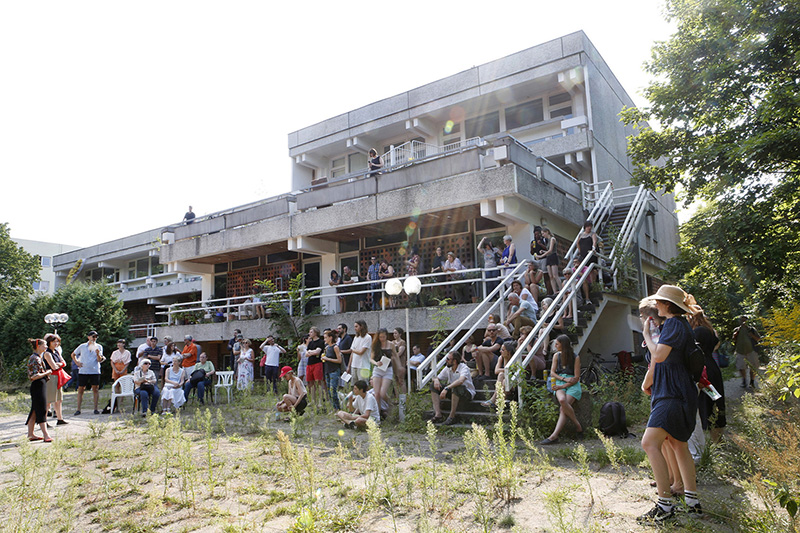 Participating artists include Megan Cope (Quandamooka), Archie Moore (Kamilaroi), Sumugan Sivanesan (AU/DE) Sonya Schönberger (DE) and Khadija von Zinnenburg Carroll (AU). In her film The Blaktism (2014), artist Megan Cope speaks about the colonial process of becoming officially recognized as an Aboriginal by the Australian government, presenting a satirical baptism video in response to her experience of having to go through this process. Schönberger responded to the site by working with the materiality of weeds, examining the process of clearing and organizing space so that it matches certain narratives and desires, and its broader implications in relation to gentrification throughout Berlin, where she also lives and works.

BAL sat down with Hornung and O’Reilly to discuss the exhibition and the complexities of the relationship between Australia and the GDR.

Samuel Staples: Can you tell me a bit more about the history of the former Australian Embassy?

Sonja Hornung: In 1972 West Germany and East Germany officially recognized one another and as a result of that many Western capitalist nation-states like Australia, that previously couldn’t recognize East Germany, jumped in and as a result there was a demand for embassies and buildings to house the diplomatic personnel. The East-German government set up architectural groups to make these uniform embassy buildings-135 buildings were built from eight uniform models. This uniformity on a building that is usually a signifier of a nation-state is in itself is quite interesting. I like to say that it’s the building the GDR built for Australia, rather than the Australian Embassy to the GDR.

In the 90s the building was privatized by the Treuhandanstalt when West Germany more or less bought out all of the East German public assets. I think the building itself has increased in value 10-fold since that time, so it’s like a distilled symbol for what’s happened in Berlin more generally. We oftentimes forget that we sit on the iceberg of the process which has lead to the gentrification in the city today and began or has its roots in the economic disenfranchisement of the 90s. 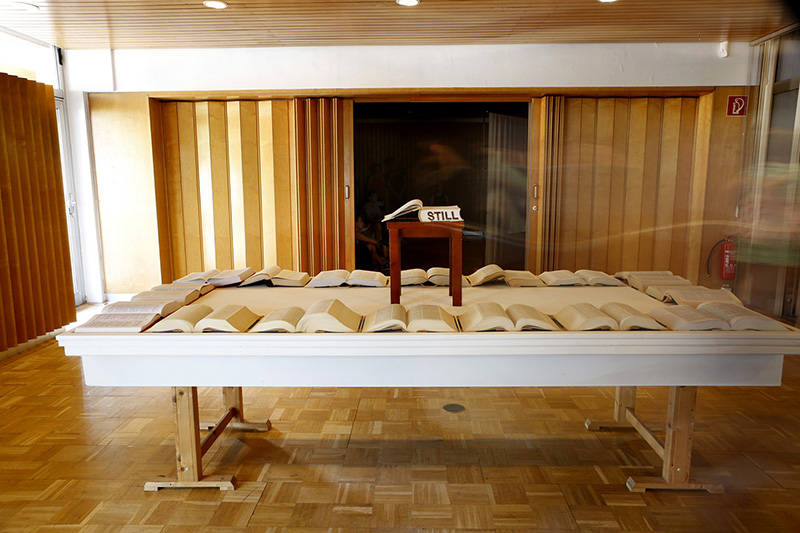 SS: What significance does the location hold for you?

SH: When I decided to start researching the building and looking at some of the more complex strands running in this unusual relationship between Australia and the GDR, I realized it was too big. It made sense to treat the building as a sort of container for a number of different histories that don’t necessarily intersect with one another and to invite other people to think that through.

There’s this definition of space that Doreen Massey, the geographer, brought to bear in 2004, “Space is the simultaneity of stories thus far,” but then the question is: What stories does this building contain that you can catch, what is suppressed, or what is not there anymore? It’s also this question about the interaction between other forms of sovereignty that endure and are excluded from the nation-state system, structured as that is by the colonial era of conquest. 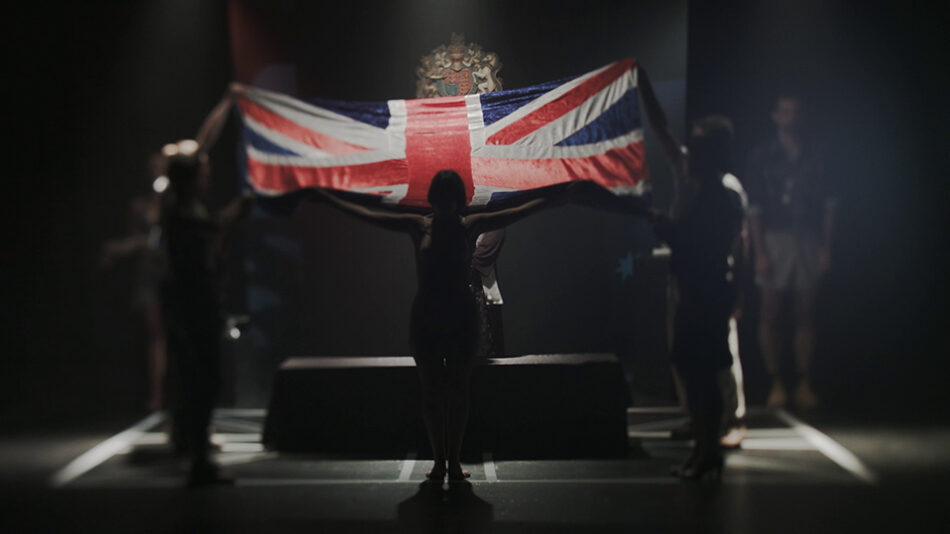 Megan Cope: The Blaktism, 2014, HD Video, 8:04 // Film still courtesy of the artist, THIS IS NO FANTASY and Diane Tanzer Gallery

SS: Our monthly topic is “invisibility” and in 2018 the struggle to be seen and heard still persists for many Indigenous Australians. Can you explain the selection of artist in relationship to the building?

Rachel O’Reilly: One of the reasons I was drawn to Sonja´sproject was because it is very timely to revisit the legacies of this period of governance from both locations, but not through the rote and revised narratives that we know. The Australian Prime Minister Gough Whitlam for example, who pushed through many modernizing reforms in just three years, is sometimes popularly understood to have granted national Aboriginal land rights. But this is not true, those struggles continue. It is also not common knowledge that the GDR hosted some very key activists and artists visiting in the 1950s and 1980s during peaks in the movements for Aboriginal citizenship and land rights. Amidst renewed attention to Aboriginal contemporary art in the big mega exhibitions, it was important for us to host the current generation who are engaged with present tensions from this long history. connecting up with previous collborators here in Europe. 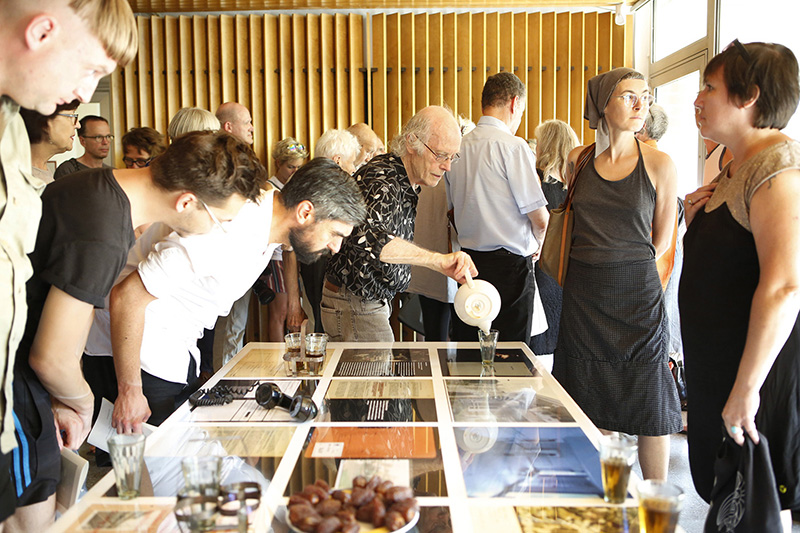 SS: Much of the exhibition is rooted in the guest and host relations between the GDR and Australia. How has this relationship changed over time?

RO: In terms of “official relationships,” obviously the ideological end points are Whitlam´s dismissal in Australia and the fall of the Wall in Germany. But yes, it was surprising to see that level of interaction—critical and pragmatic-between the two states.

SH: The GDR also was incredibly openly critical of Australia’s colonial history and its ambitions in South-East Asia. In the same way, the former GDR was more aware of Germany’s own colonial history than Germany is now. So there’s that shift in position and also just two states trying to legitimize themselves, and the legitimization was mutual but it only lasted 11 years. The embassy closed down in 1986 as the level of trade did not meet expectations..

RO: There is also a shared history of genocide between Australia and post-war Germany. It feels very different to present these positions in Germany than the UK, for example. 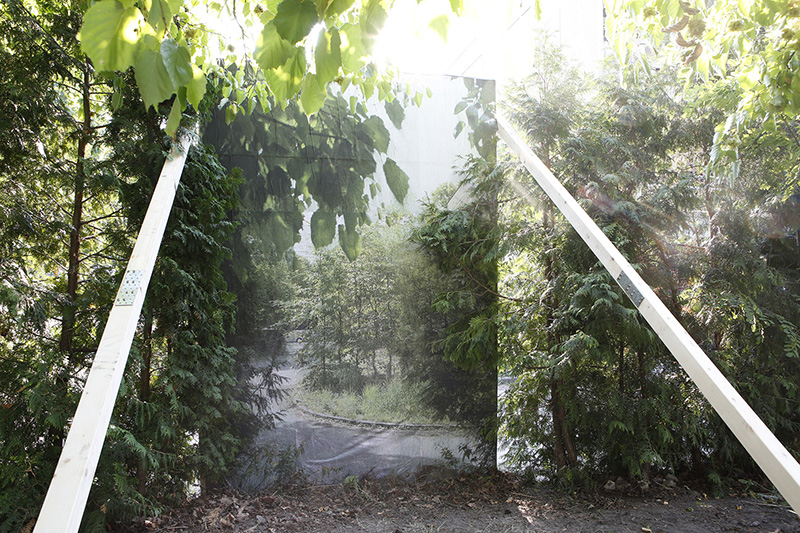 SS: Given what you’ve said so far, drawing connections between land and property seem to be an underlying message.

RO: It sounds like the question of Aboriginal sovereignty and the gentrification of Berlin are at opposite ends of the scale, but if you look at the history of property law that changes. Property law was innovated in the colonies, models of land only became fully fungible there, and the systems invented are what we now have as the dominant mode for the registration of property globally.

Sarah Keenan has written about this. More specifically about racial and racist aspects of property law. If you think about the different modes in which property law become more and more capitalist, it also leads you to see how the injustice of property law from those histories continues in intercity scenes. People talk about racial capitalism or colonialism, to name the way borders hit home, globally, but also through spatial series of legal innovations and double histories, which connects Europe and the South and its settler colonies. You can’t read the history of property without the colonial project, and how colonial projects are used as labs of legal experimentation. I think we really focused on this question of property because that’s where all of these ideas come together.

This article is part of our monthly topic of ‘Invisibility’. To read more from this topic, click here.