Titled ‘We Don’t Need Another Hero,’ the 10th Berlin Biennale (BBX) positions itself in the negative. It emphasizes a refusal of the status quo, of the imagined necessity of a savior to free us from the messy present. Yet, while the show exposes viewers to artists and positions critically missing from German institutions, the exhibition itself also reinforces the spaces and formats it negates. Like many other international, recurrent exhibitions, BBX is politically correct—it appears to cling to an idea of identity politics as a vehicle for social change—begging the question of how a hero-less curatorial project in the positive might look. Nevertheless, lead curator Gabi Ngcobo’s shared struggle to bring diversity of approach and personal origin to European institutions, themselves based on foundational acts of colonialist extraction and accumulation, must not be overlooked. Ngcobo and her team’s radical refusal of heroics—technological, national or cultural—in the struggle to decolonize and democratize art institutions opens a space for new lines of inquiry and action, in and outside of art. 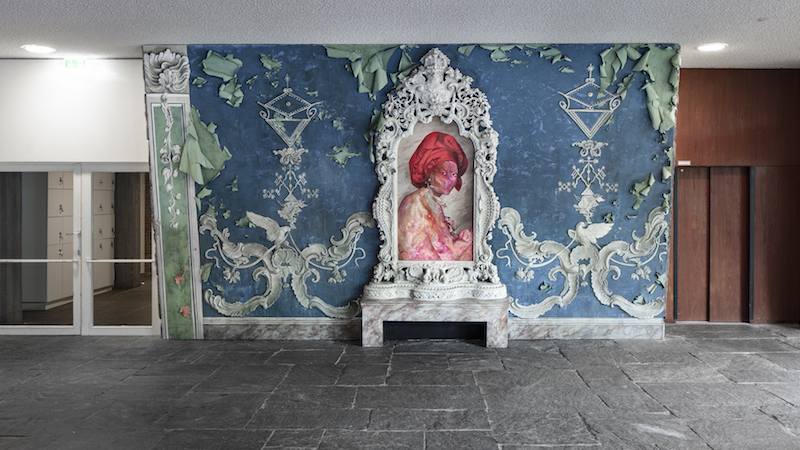 The exhibition is spread across four venues: Akademie der Künste, KW Institute for Contemporary Art, Volksbühne Pavilion, and ZK/U – Center for Art and Urbanistics. The first two are major contemporary art institutions, and the miniature Pavilion gains most of it significance in relation to the recently contested Volksbühne, while the ZK/U is more a one-off DIY venue, run by an artist collective. The stationary exhibition is complimented by a roaming public program presented under the banner “I’m Not Who You Think I’m Not,” which explores eminent topics and spaces dealt with directly or obliquely in the exhibition proper. 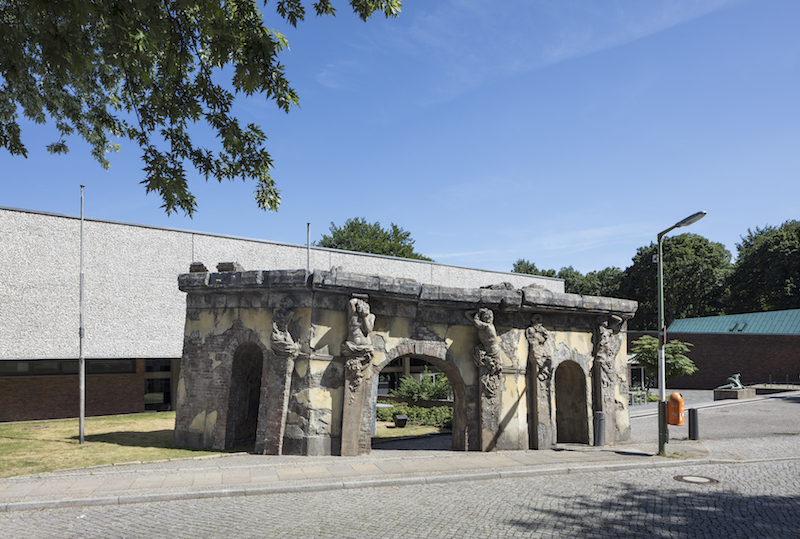 In this review, three works stand out as potentially emblematic, if not only of the exhibition’s successes then also of its limitations as a tried-and-true format. The first of these works greets visitors to Akademie der Künste and guides them into the exhibition: 19° 36’ 16.89“ N, 72° 13’ 6.95“ W) / (52.4042° N, 13.0385° E (2018), a public installation by Firelei Báez situated in the front yard of the institution, in the green undergrowth of the characteristic tower housing of the modernist Hansaviertel. The work is a detailed, impermanent reconstruction of a fragment of Sans-Souci, a castle in Milot, Haiti, whose name is shared with the Sanssouci palace in Potsdam as well as Colonel Jean-Baptiste Sans-Souci, a prominent figure in the Haitian revolution. The work represents a move from the painted space of the page or canvas toward the ambient space the canvas itself inhabits: the public space of the institution and furthermore the urban environment. Created as pictorial fiction, the fragment occupies space and demands to be seen while unashamedly constructed from materials better known to set designers and Las Vegas architects: Styrofoam, plaster and concealed steel substructure. By embracing its own temporariness and inevitability of ruin, the work comes closer to the original upon which it was modeled, while it nevertheless remains captive to the institution. 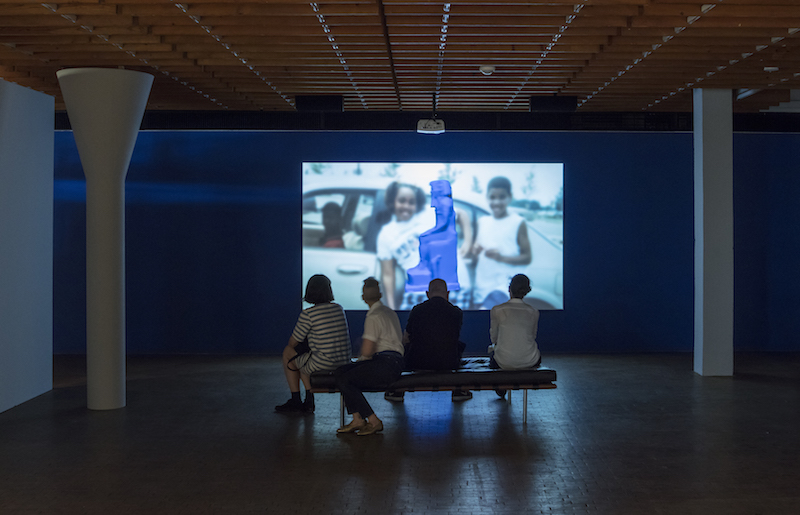 Passing by Mario Pfeifer’s important and widely discussed video Again (2018), the second potentially emblematic work comes into focus on the blue back wall of the final room: Sondra Perry’s video piece It’s in the Game ’17 or Mirror Gag for Vitrine and Projection (2017). Perry’s work exposes a 2009 controversy whereby the National Collegiate Athletic Association sold the likenesses of college basketball players to EA Sports for use in their videogames, without compensation. Among them was Perry’s twin brother Sandy, who appears in the video as the artist’s autobiographical counterpart. The looping video, staged in several distinct, overlapping sequences, opens with a montage of rotating 3D models of artifacts pillaged by colonial powers (and still held in their institutions, like the British Museum and the Metropolitan Museum of Art) over a backdrop of blurry family photos depicting the two siblings, set to The Stylistics’ “You Are Everything” (1971). It goes on to dramatize acts of re-appropriation by the artist, who photographs her brother on an outdoor basketball court and travels with him through the Met and British Museum, photographing the unabstracted physicality of the stolen artifacts. These acts of re-appropriation by Perry underscore the imbalance of existing power structures and the limited agency of artists, as well as the exhibition format, in spurring material acts of repatriation. However, the hopeful approach to art as a vector for ideas, which might be able to reach agents of change, is maintained in the work and, more generally, the exhibition. 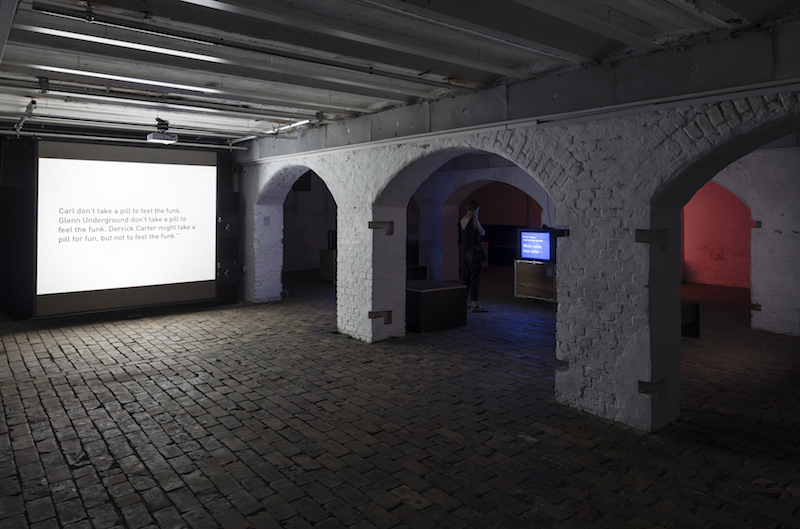 Skipping over the portion of the exhibition housed in KW, which includes a noteworthy, orange-bathed and highly immersive spatial assemblage by Dineo Seshee Bopape, the third artistic contribution at hand is a retrospective of works by Tony Cokes, masterfully installed in the musty cellar of the ZK/U. The space is organized similarly to a club, with lighting only provided by one projection screen and an array of CRT televisions casting alternating red and blue hues against the whitewashed brick walls. The projected works Black Celebration (1988) and Mikrohaus, or the black atlantic? (2006–08) set a soundtrack oscillating between industrial and danceable house music, while many of the monitors offer isolated ones of their own piped through headphones. Black Celebration includes newsreel footage from rebellions in Watts, Boston, Newark and Detroit in August 1965, set to Skinny Puppy, while Mikrohaus operates as a minimalist assemblage of text and music exploring the politics of house music, its historical status as a medium and its rootedness in soul music influenced by the trauma of the Middle Passage. Neighboring videos, such as Evil.16: Torture Musik (2011), prove Coke’s prowess in combining on-screen text and music to explore deeply troubling topics, like the use of torture, without the necessity of images or over-complicated essays. The public accessibility of Coke’s work, similar to that of Perry’s and Báez’s, approaches a mode of artistic production that regards space—of the colonial city, the imperial museum or the distributed screen—as an inalienable feature of art and curating. 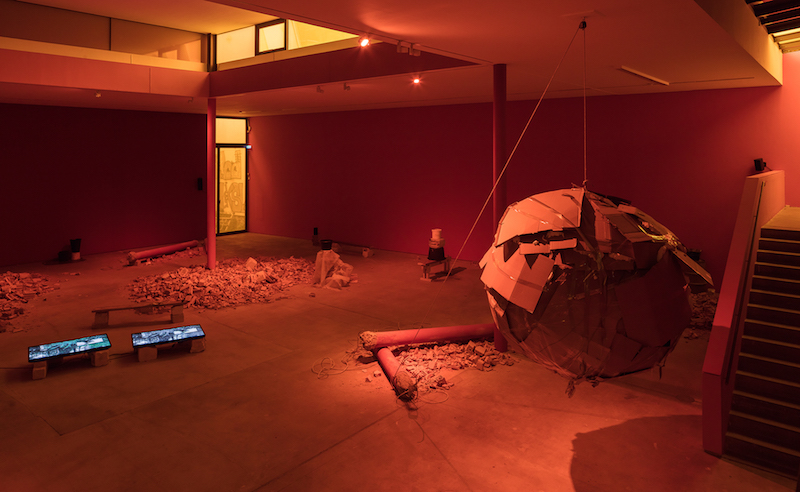 Overall, the 2018 Berlin Biennale fosters an approach to politics situated in the everyday interactions between people in immediate space, as opposed to those produced within large-scale political or technological infrastructures. The gaze shifts away from the antiheroic figureheads of populist parties and toward a celebration of the quotidian as a site for aesthetics and politics. At a time marked by ethnonationalism and racist cults of personality emerging on the world stage, the BBX’s shift toward the mundane—or even banal—interactions that facilitate them is a welcome critical reorientation. Yet, at the same time, the format of the exhibition potentially limits its scope. How can we go beyond permanent arts institutions, as safe enclosures for didactic exhibitions, to strengthen practices that spill out into everyday spaces beyond the (however diversified) consensus of art discourse? While this question was partly addressed in the BBX public program, it may very well be beyond the effective purveyance of any art biennial. The question we might ask ourselves as artists, curators, writers, readers and exhibition-goers is: Should it be?