Earlier this year, Juliette Desorgues curated an exhibition for artmonte-carlo entitled ‘Hypersea,’ featuring the work of artists including Mimosa Echard, Rebecca Jagoe, Jala Wahid, the Young Girl Reading Group and Berlin-based collective Lou Cantor. Having taken place on a luxury yacht moored at Port Hercule, the show provided occasion to consider the nexus of a number of discourses—social, environmental, economic and cultural. In a time of galloping inequality and challenges to hegemonic regimes of thought and institutions of cultural arbitration, situating an exhibition in such an unapologetically exclusive environment demonstrated a determination to swim in the deepest of metaphoric waters, where crosscurrents could prove treacherous in the extreme. But as ‘Hypersea’ explicated, Desorgues was unafraid to bring together artists prepared to face such tensions head on. 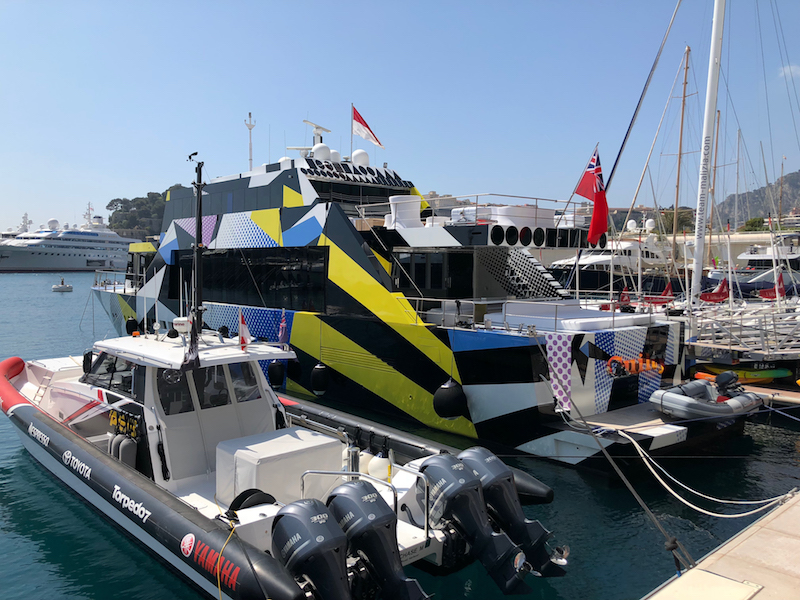 Guilty, a yacht designed by Jeff Koons, moored next to the yacht hosting ‘Hypersea,’ 2018 // Courtesy of Lou Cantor

Desorgues’ impetus for the exhibition grew out of reading the increasingly influential text ‘Hydrofeminism: Or, On Becoming a Body of Water’ by Astrida Neimanis. Neimanis’ work, along with Kamau Braithwaite’s notion of “tidalectics,” a postcolonial reconceptualization of Hegel’s epistemological mechanism, reflects an burgeoning interest in interpreting the contemporary moment through water-based metaphors, a kind of aquatic nomos which yields the potential for ideologies that embrace both materiality and uncertainty in new ways. As Neimanis writes in ‘Hydrofeminism’: “To think of embodiment as watery belies the understanding of bodies we have inherited from the dominant western metaphysical tradition. As watery, we experience ourselves less as isolated entities and more as oceanic eddies: I am a singular dynamic whorl dissolving in a complex, fluid circulation. The space between our selves and others is at once as distant as the primeval sea, yet also closer than our own skin.”

Lou Cantor, a collective entity that the two artists involved, Jozefina Chetko and Kolja Glaeser, understand as a mechanism for breaking down notions of individualized authorship and sovereignty, seem like natural interpreters of a hydrofeminist aesthetic. Their own longstanding interest in intersubjectivity has seen them considering the ways in which individuals, embodiment, perception and space interact, forming emergent—sometimes unconscious—sets of relations. I spoke to them about their contribution to ‘Hypersea’ as well as the ways in which hydrofeminist thought has impacted their thinking. 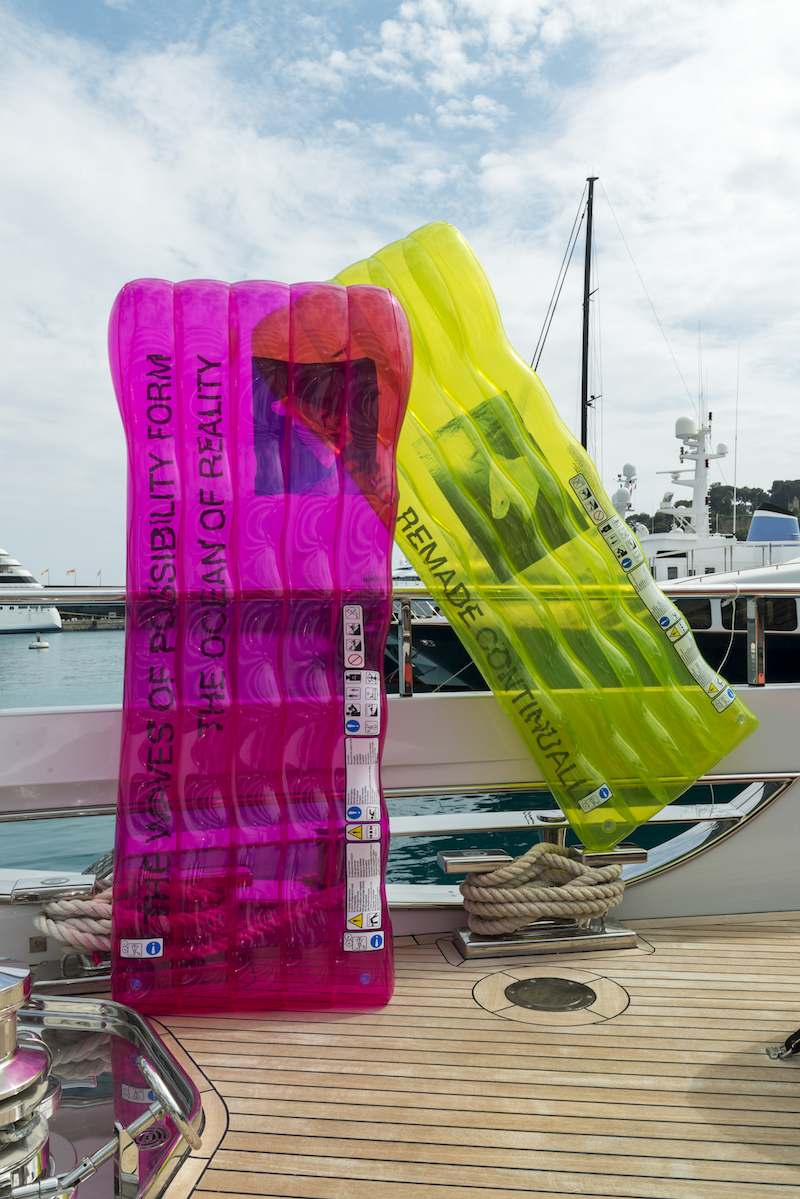 Lou Cantor: The Waves of Possibility from The Ocean of Reality and I am Made and Remade Continually, 2018 // Courtesy of the artist

William Kherbek: Could you describe how you became interested in the concept of hydrofeminism?

Lou Cantor: The impulse came from the curator, who found the text mind-blowing and sent it to us. What hooked us into this whole project is a passage in the text which recognizes that we are basically water that seeks a way of penetrating dry land. When you think about how we are water and that water has an agenda of how to get into dry land, to get higher into mountains, this is accomplished in the bodies of people. We are the bodies of water. This is very radical. We don’t know how to keep it from sounding like we’ve found a new religion we’re going to follow, but we think such a concept, in a convincing or poetic enough way, makes you rethink the whole structure of what it means to be a person. When you make a logical equation, it makes sense: we are primarily built of water. We are water, it came out of the ocean and, one way or another, will go back to that system.

If you follow this way of thinking, it drastically changes the political decisions or views on reality that you take in to account, especially in relation to the ocean, because the ocean is a place that is very particular. It is still the largest part of the earth, and it is probably the most violently polluted part. We have also penetrated everything that sticks out of the ocean, the earth, the sky and above, but the ocean is still this huge mystery. We also don’t really know how much we’ve damaged the ocean; we know it’s bad, but we don’t know how bad.

WK: Are there specific works you made for ‘Hypersea’ that you feel are good examples of how you integrated the ideas of hydrofeminsim into your practice, how it affected aesthetic choices or material selection, for example?

LC: All the works we prepared for that show were inflatables and we chose to work with them because we were interested in making something at human scale and also because the inflatable mattress resembles the human body—it’s made to support a body on water. The fact that it is made to be used on water is important for us, too, and the fact that if you are above the water and want to see what’s beneath the water, then you have to create a window. So you put a film on the water and can clearly see because the material doesn’t obscure the picture of what is under the surface.

The mattress being an interface and made from plastic—the worst polluter of oceans—were also important for us. We printed images and text onto the mattresses so you could see them from either side, and the images we chose were of plastic bags in the ocean photographed by divers. We wanted to work with these images because they are very beautiful and we’re interested in this weird paradox where you look at something that is very beautiful, but, at the same time, you know it is very horrible because this floating bag will most likely cripple some living being or strangle an animal. 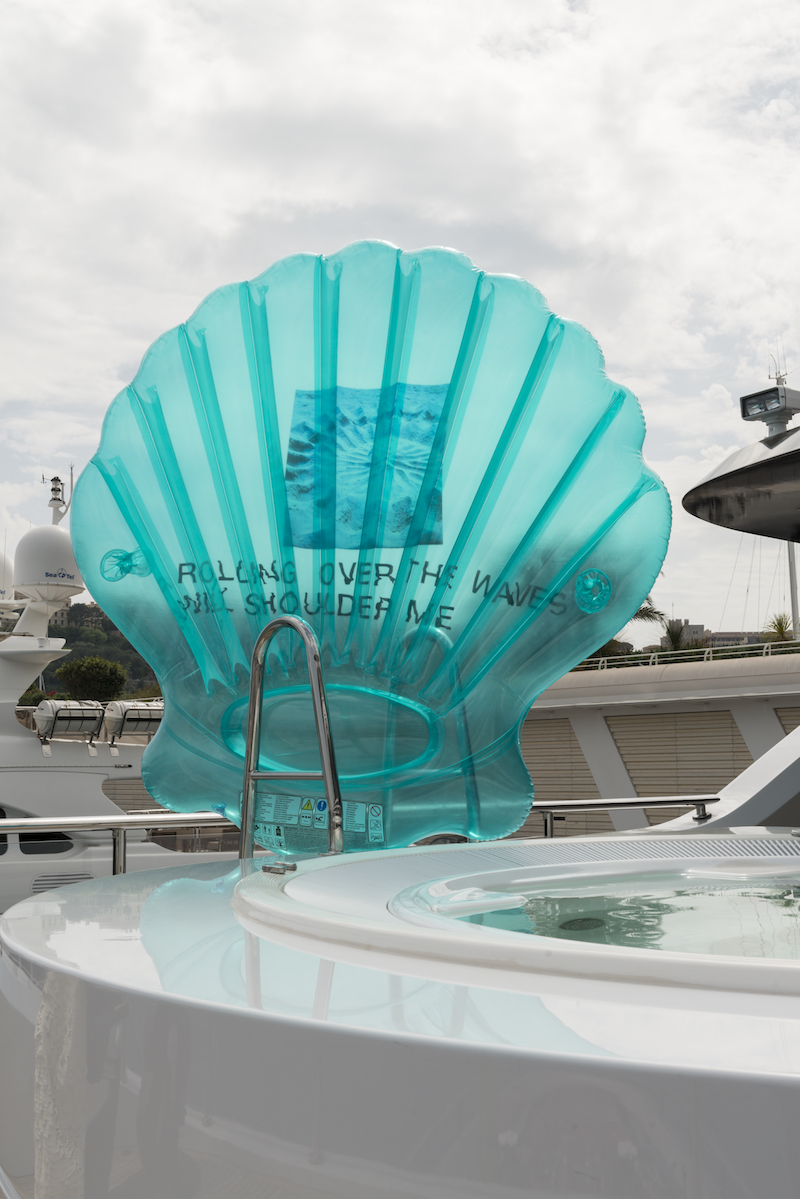 Lou Cantor: Rolling Over The Wave Will Shoulder Me, 2018 // Courtesy of the artist

WK: ‘Hydrofeminism’ explores how the lexicon of water enters other areas of life through the development of metaphors like “currency.” Did these metaphoric connections to water develop or influence your own approach to your contribution to ‘Hypersea’?

LC: We didn’t attempt to comment precisely on this subject, but we, of course, used the site-specific environment of yachts as a reference point, and then, in an aesthetic way, used the mattresses which, as we said, have been carefully chosen for their transparent character. We have this multi-layered image of the mattress and the text, the way it fits on this boat, and the ways in which it is photographed from multiple places. So the total work is a bit like an interactive structure on an aesthetic and context-based level.

WK: I also wanted to talk about the tension between embodiment and permeability explored by Neimanis. For me it brought to mind ideas of the way thought flows through and from bodies and brains. People have long thought about cognition via aqueous metaphors, going back to the “stream” of consciousness. Neimanis’ text makes clear that the body is a vector for the transmission of other living beings, like microorganisms, and you mentioned the visual permeability of the mattresses. So could you talk about how the idea of “flow” and varied permeability affects the conception of art as a vector or medium of exchange in itself?

LC: In our book Turning Inward we were very interested in thinking about certain systems or strategies and how, if you understand the way different ones work, it turns out they sometimes work exactly the same way, regardless of what relationship we’re discussing. The example we used was Poisson distribution, which was developed for the distributions of viral outbreaks. It kind of works for flu epidemics, but also for viral forms of “regime change” because certain events, once put in motion, regardless of whether they are bacteria or ideas, tend to behave in similar ways. This provokes the parallels between different things that involve fluidity, and we guess it is very attractive for hydrofeminism because feminism has this historical set of problems in the way feminism defines itself. The more feminism is true to defining itself the way it wants to see itself, the less politically pragmatic it can be, because the idea of feminism is so inclusive, so expansive, that it can’t really be a fighting type of ideology. We think hydrofeminism is suggesting exactly this: We either compromise on what we believe or we just realize that this is not a fighting type of ideology. We can fight certain ideas, but the ideology itself is an ideology of understanding rather than a negation. 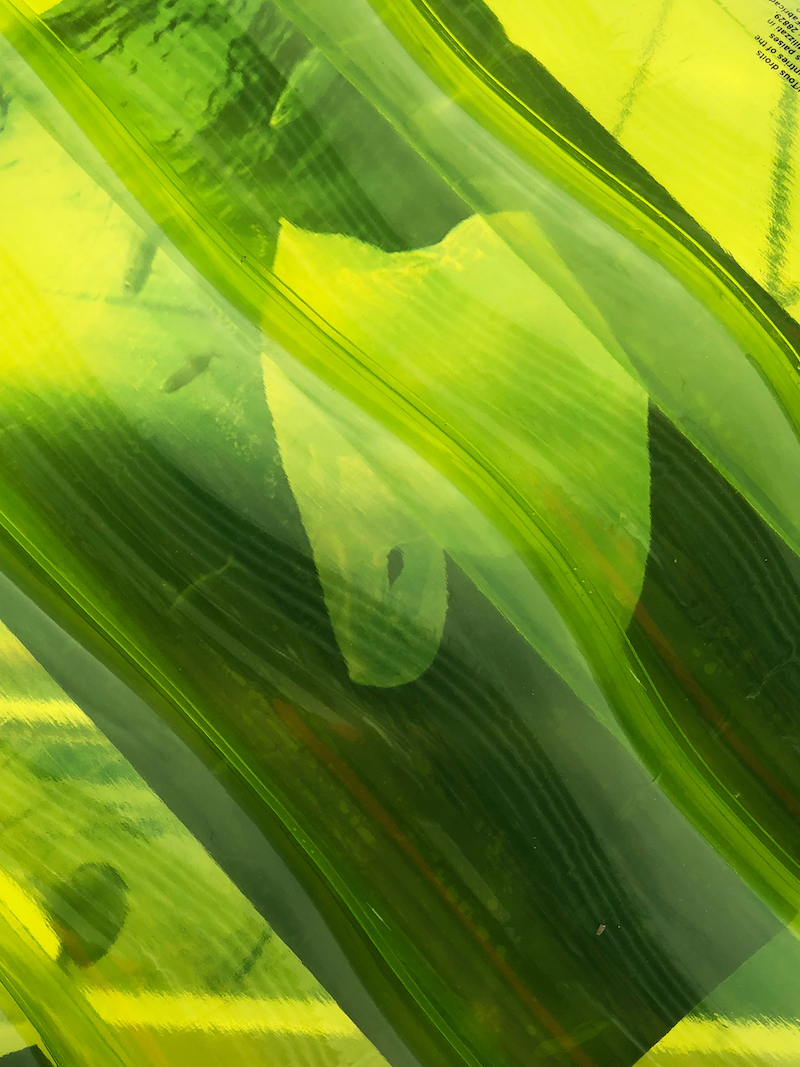 Lou Cantor: I am Made and Remade Continually, 2018, detail // Courtesy of the artist

WK: Has this notion of hydrofeminism influenced the way you approach intersubjectivity in general and, particularly, has it brought new ways of looking at the ways individuals, objects and spaces interact with each other?

LC: It has clarified ideas we had more than influenced. It’s always extremely satisfying when you encounter texts that phrase your thoughts better than you imagined you could, and that sketch possibilities in a way that you can actually see them as outside objects and can therefore contemplate them more easily. We think more of that has happened because a lot of the ideas have to do with the impossibility of defining things. This has been part of our work before and the idea of hydrofeminism is something that we’d love to see become a part of the broader social and political discussions because we feel that should we be able to implement some of those ideas—talking about politics, for instance, would be fantastic.

As the current crises show, there are places where there are no solutions, there is no way to decide without forcing one or other group to compromise their beliefs. This is a point when one has to step back from an idea of deciding what is “good” and see that there might be multiple things that have to be accepted as good, especially in the multicultural environment. How to negotiate all those values together, as a community, without needing to come up with an answer should be considered.