When Google Street View (GSV) launched in Germany in 2010, the country’s privacy laws allowed citizens to request that their homes be blurred. Before the service’s unveiling, more than 244,000 residents had already submitted requests, proving for artist Tim Tetzner an important aspect of his country’s culture: the recurrent and entrenched fear of the exploitation of privacy. Tetzner was drawn to the resulting blur’s aesthetic and began amassing screenshots of hidden buildings with a particular focus on modernist architecture built between 1920 and 1938. He also traveled to the buildings in this digital archive to take his own photos and emulate the interesting blurred aesthetic from Google in Photoshop.

The exhibition ‘If the Eyes Can’t Touch (Blurred Modernism)’ at SCHARAUN, part of Berlin’s Project Space Festival, comprises of a slideshow of 36 of his screenshots and six of his own blurred images framed on the wall. The exhibition also displays a hypothetical dialogue (referred by Tetzner as a “metalogue”) between Google, Blur and the homeowner and architect Elizabeth Diller that outlines, dissects and conceptualizes Germany’s reaction to GSV. It mentions, for example, theorist Walter Benjamin’s The Work of Art in the Age of Mechanical Reproduction, and the concept of the loss of a moment’s “aura,” or authenticity, in a photo—in this case done by blurred photos on GSV. There is also a mentioning of the concern for what becomes of Google’s gathered personal data, or the benefits of having this information accessible, among other differing arguments that contribute to the discourse of privacy.

In his exhibition, Tetzner explores this discourse but is primarily drawn to the visuals, using art to present understandings and aspects of modernist architecture as well as modern German society. Berlin Art Link spoke to Tetzner about his interest in privacy, architecture and what ownership means in the age of the internet.

Sofia Bergmann: What started your fascination with Germany’s privacy laws in relation to Google Street View?

Tim Tetzner: My interest derives from a fascination of the social and political sphere: how are systems of social interaction being organized and/or regulated, and how those spheres intertwine with aesthetic phenomenon. Before the digital launch of Google Street View, the debate in Germany about privacy and property rights heated up. I was following the media with a deep interest in how the internet would intervene into the “real” world. A similar debate was the 1987 census where the public concern went towards the German government with the same arguments being brought up: shouldn’t we have the right to keep this information private?

Another important moment for the exhibition was an incident in the early days of Bauhaus. In 1926, when the painter Lyonel Feininger moved into the Meisterhaus designed for him by Walter Gropius, he saw his privacy being threatened due to the house’s large window front. Without consulting Gropius, Feininger replaced the bottom part of the window with opaque glass resulting in a serious dispute between Gropius and Feininger. This dispute inspired another work in the exhibition, a kind of spatial intervention referencing Gropius and Feininger. 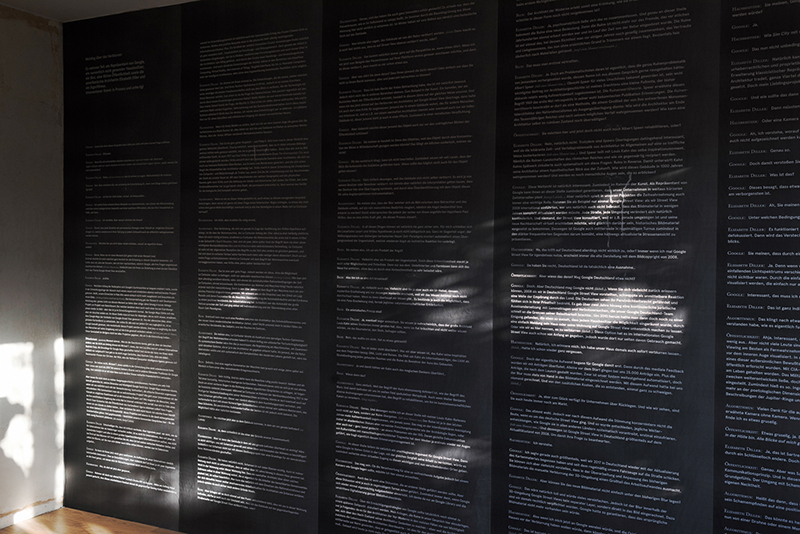 SB: Many people believe that Google’s world-wide reach is ruining aspects of society, especially privacy. Theorist and philosopher Paul Virilio for example, has declared Google’s map service as “the end of the world.” What is your opinion on this?

TT: I personally think that Google Street View opens up a lot of possibilities to explore and to discover parts of the world that remained invisible to the eye before globalization set in. On the other hand, I fully go along with Virilio’s thesis because when everything becomes visible and accessible, the hidden and unknown disappears, which means the coming of the end of the world as we know it so far.

You can have many different views, which is what I tried to work out with the metalogue. All positions are comprehensible. I have 100 percent understanding for those who don’t want their property being shown, but I also tried to point towards a responsibility that comes along with living in historically important architecture. People could be interested in the architect of that modernist-era building, and blurring it is not a nice gesture towards those interested.

SB: Do you think the large amount of modernist buildings that are blurred on Google Street View adds to the discussion of German society’s relationship with privacy?

TT: Maybe not, and this is also not my intention. I take this phenomena as a starting point for an aesthetic play that crosses the boundaries of the physical world, its forms of presentation, and how the virtual world unfolds in front of us.

SB: In your exhibition, there were some framed photos of buildings you had blurred with Photoshop. Why did you include these images along with the slideshow of real screenshots from Google Street View?

TT: It all started with this selection of screenshots, but then I felt a necessity to go beyond the barriers of documentation. Through the focus on modernist architecture, I already had set a specific perspective on its reduced form and the loss of ornament. Fusing this with a digital phenomena of the blur is nothing else than an aesthetic decision.

SB: What was your experience going to the places in your screenshot archive?

TT: The experience was mostly the same: a place that I explored via its blur had a completely different “aura,” or atmosphere, in real life. The blur adds something that goes beyond the standard spatial experience. Visiting them is also where the idea to re-photograph those places and make them accessible again in the exhibition came from. 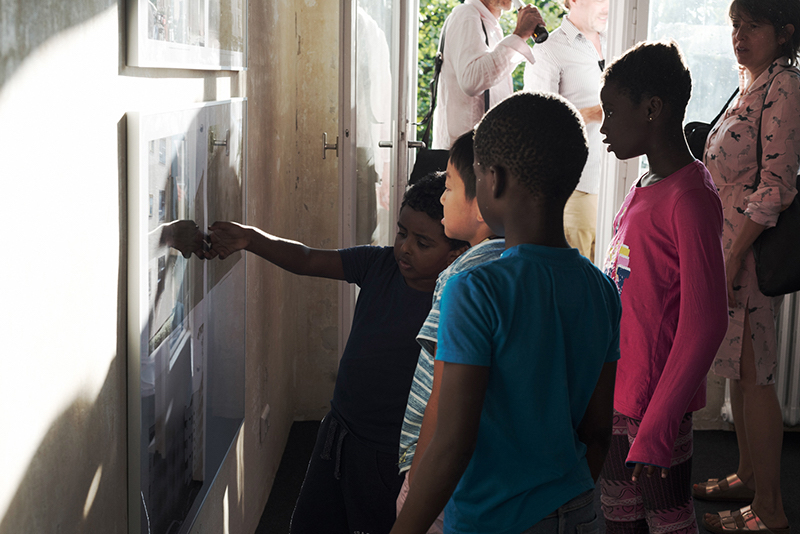