The Berlin Art Prize 2018 exhibition brings together diverse interpretations of contemporary politics through its nine participating artists’ works. Three artists will ultimately be awarded the prize on September 28th, during Berlin Art Week, and the exhibition will be on view at The Shelf in Kreuzberg until then. The nominees’ works explore subjects ranging from gender and sexuality to capitalism, history and human psychology in a compelling array of pieces that transcend visual and aural representations, even awakening the senses of smell and touch. 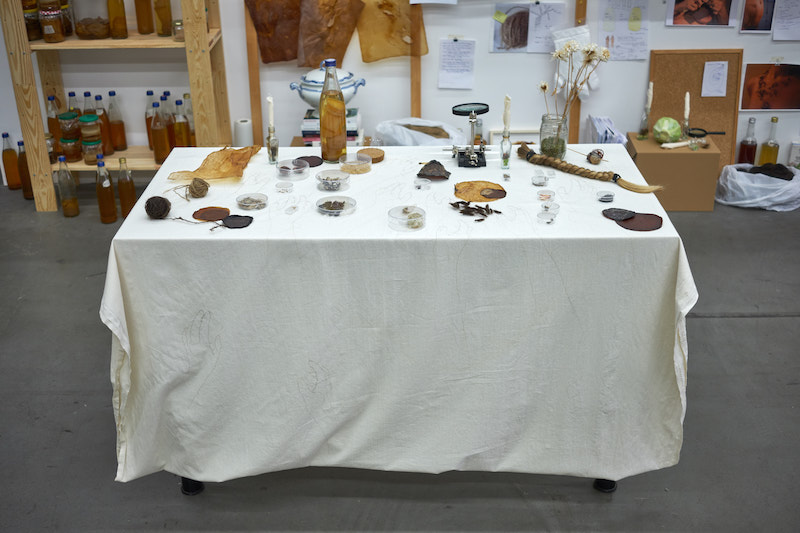 A round glass container filled with artist Alanna Lynch’s urine hangs from a rope made of blonde hair, in her piece The Lively Vessel. The work is uncomfortable and entices visitors toward her more prominent installation on the other side of the wall: Vulnerable and Resistant, a multimedia display of objects that evoke feelings of intrigue and disgust, in a commentary on the human condition. With a background in science, Lynch uses her research cultivating fruit flies to metaphorically and paradoxically expose humans’ recurrent fear of contagion, or contamination by what we consider ‘pests’. This fear is laid out through a scale mock-up of her fly-laboratory— multi-year archive, notes, ‘gross’ objects, and photos and displays of dead flies and insects en masse. The off-putting nature of the installation provides reflection on the similarities between our stigma toward flies, and marginalized members of society.

She also includes varying displays of hair and urine as a comment on the connotations and stereotypes stemming from our connection of human smell and hair to race, gender and social class. The uneasiness when confronted with these very natural visuals, smells and textures, mixed with a curiosity impossible to ignore, serves to deconstruct aspects of the human psyche that have internalized taboo and cultural hierarchy. 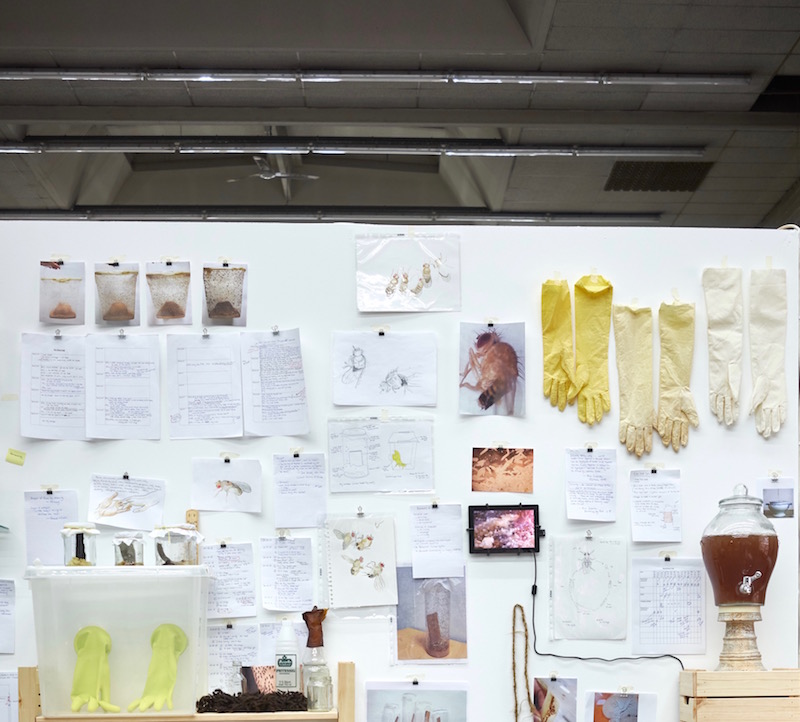 Monika Grabuschnigg’s flesh-pink, tiled fountain-sculpture suggests a sexuality that questions and dissects how our minds receive and express desire and lust. The sculpture series ‘What I Shall Swear By’ (2017) explores the trifecta that provides intimacy and desire in modern society: namely Hollywood, Netflix, and the music industry, as opposed to the religion, education and family of the past. The fountain sculpture reflects the result of the influence of late capitalist structures that infiltrate our relationship to sexuality: the shape of male genitalia covered in several ceramic mouths, constantly spewing water into a bowl of bubbles fizzing around the sculpture—its uncanny aesthetic sensation of constant overflowing—alludes to the feeling of awkwardness and simultaneous relief that often comes with the expression of love and pleasure today. 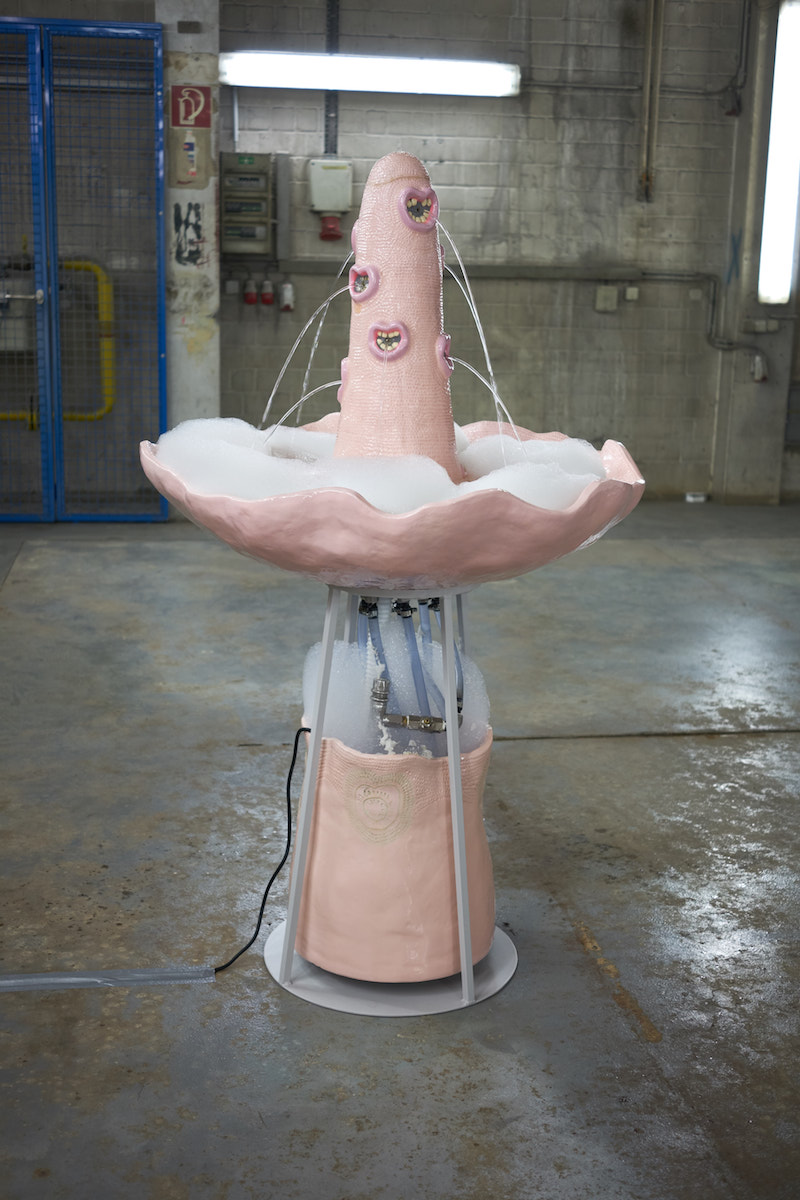 Monika Grabuschnigg: ‘So it is a Lover who Bubbles and who Foams’, 2017, Berlin Art Prize 2018 // Photo by Florian Denzin

1.000.000% by Ana Alenso creates a setting where the viewer can literally walk through her evaluation on economic inequality, using Venezuela’s current state and oil ‘resource curse’ as the example. The title stems from Venezuela being the world’s second largest oil reserve, and its inflation rate of 1,000,000% – a country where even the simplest necessities are expensive and scarce still holds some of the richest resources, while it is undergoing the worst humanitarian crisis today.

One of the objects in her installation is a wind chamber blowing recently defunct Venezuelan currency (the Bolivar Fuerte) in an emulation of the underlyingly brutal TV game show feature “ciclòn de dinero”, where contestants try to catch as many bills as possible as they blow around them in the chamber. Alenso parallels the absurdity of this game to the economic system ravaging Venezuela – a game of luck on TV and in society. Another one of the many objects displayed in the exhibition space, is a tilted BP oil drum oozing the smell of petrol, now repurposed into a protest of its origins, with sounds of the Chicago Stock Exchange coming out of the drum. 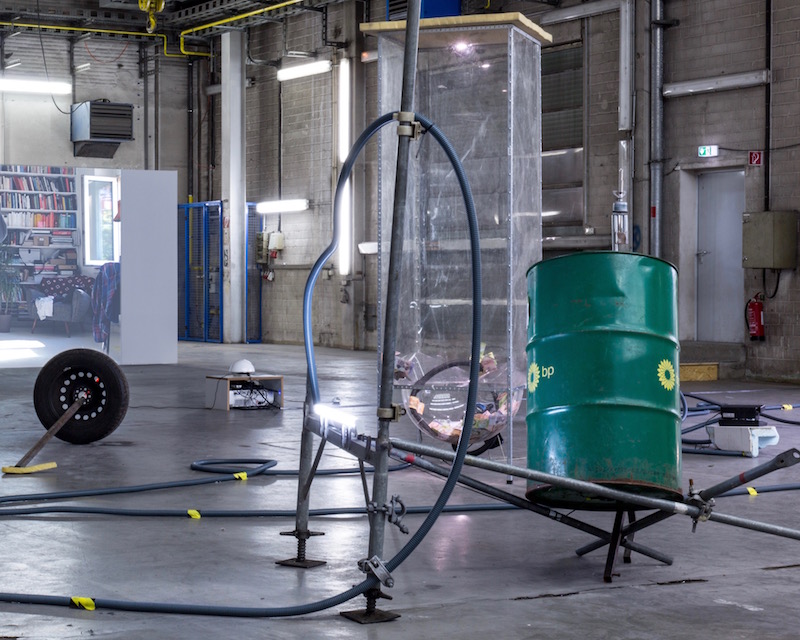 The exhibition also includes two video installations by Doireann O’Malley: Prototype I and II, 33- and 67-minutes long, respectively. They tackle a range of topics related to gender and the breaking down of the binary, drawing on the well-established decoupling of gender and sex. At any given point that the viewer enters the screening room, the video will present facts, concepts or visuals that attempt to debunk common misconceptions about identity, gender, sexuality and the LGBTQ community, including what transitioning genders means to different people, what it means to be born ‘male’ or ‘female,’ and the semiotics of gender coding in public space.

In its fifth year, the Berlin Art Prize maintains its commitment to inclusivity and independence, presenting works from artists regardless of their background, and ideas and installations that push the boundaries of the preexisting contemporary art climate.